I don't know about you, but every now and then, I have to have a good milk shake.  Supposedly, my mom consumed her fair share of  milkshakes while I was in the womb, so it's not surprising that I'm still a big fan of the delicious, slurpable ice cream treats.  Going to school in North Carolina, I was spoiled by having a Cook-Out just off campus.  They stayed open until 3am, and they could make any combination of flavors you could imagine for just a couple bucks.  It was perfect for my college wallet.

Fortunately, Justin loves milkshakes as much as I do, so it wasn't hard to convince him to indulge in a milkshake with our burgers and fries once a month.  With Good Stuff Eatery within walking distance to our old apartments, it was easy to head over there once a month to sample each month's special shake.  It was hard work, let me tell ya, but somebody had to do it!  So here's our assessment of the year's shakes, in order of preference: 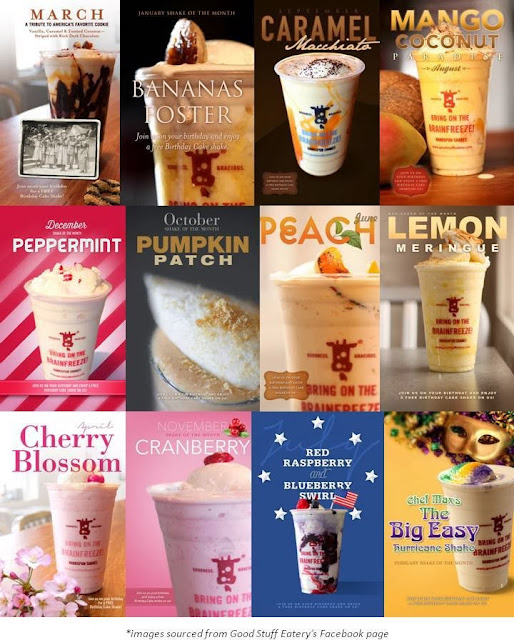 The overall favorite was Samoa.  Yep, just like the Girl Scout Cookie!  But bananas foster was a close second, with caramel macchiato rounding out the top three.  The great thing about the shake of the month is that it features a seasonal ingredient as well, and while pumpkin and cranberries were natural picks for the fall, a nod goes to the creativity in picking a girl scout cookie for a less obvious month such as March.  Now, the other shakes weren't bad, but the fruitier shakes tended to be a bit too cloyingly sweet for our taste buds.

Also of note is the birthday cake shake.  If you visit Good Stuff on your birthday, they give you a free birthday cake shake.  I'm not a huge fan of cake batter-flavored things, so this wasn't my favorite shake, but if you like that sort of thing, I'd definitely recommend it.  This is all in addition to their regular shake offerings, which are pretty awesome in their own right.  Prior to the shake-of-the-month, the Milky Way Malt was my go-to shake, though the Vietnamese coffee shake is also high on my list.

There you have it...we risked sugar-highs and brain-freezes to let our loyal readers know what was shakin' in 2013.
Posted by Unknown at 2:23 PM