I. Wanna Stock and Roll All Night!

We're all about using as much of an animal as possible when we cook, and not letting anything go to waste.  So once we sliced as much turkey off the bone as we could, we threw the carcass into a stockpot with some water to make a delicious stock.  Just like we did with the pig head last Christmas, the turkey bones sat on the stove for a good 4 hours.

It's really easy, and you can do this with any bones, whether you've got a chicken, shrimp/lobster shells, fish bones...you can make a pretty mean stock out of just about anything.  Since we knew we'd mostly be using the stock for soups, we also threw in some celery stalks, carrots, and a bundle of sage, thyme and rosemary.  If you want a more plain stock, you can leave those items out.  Then just fill your pot with enough water to cover the bones. 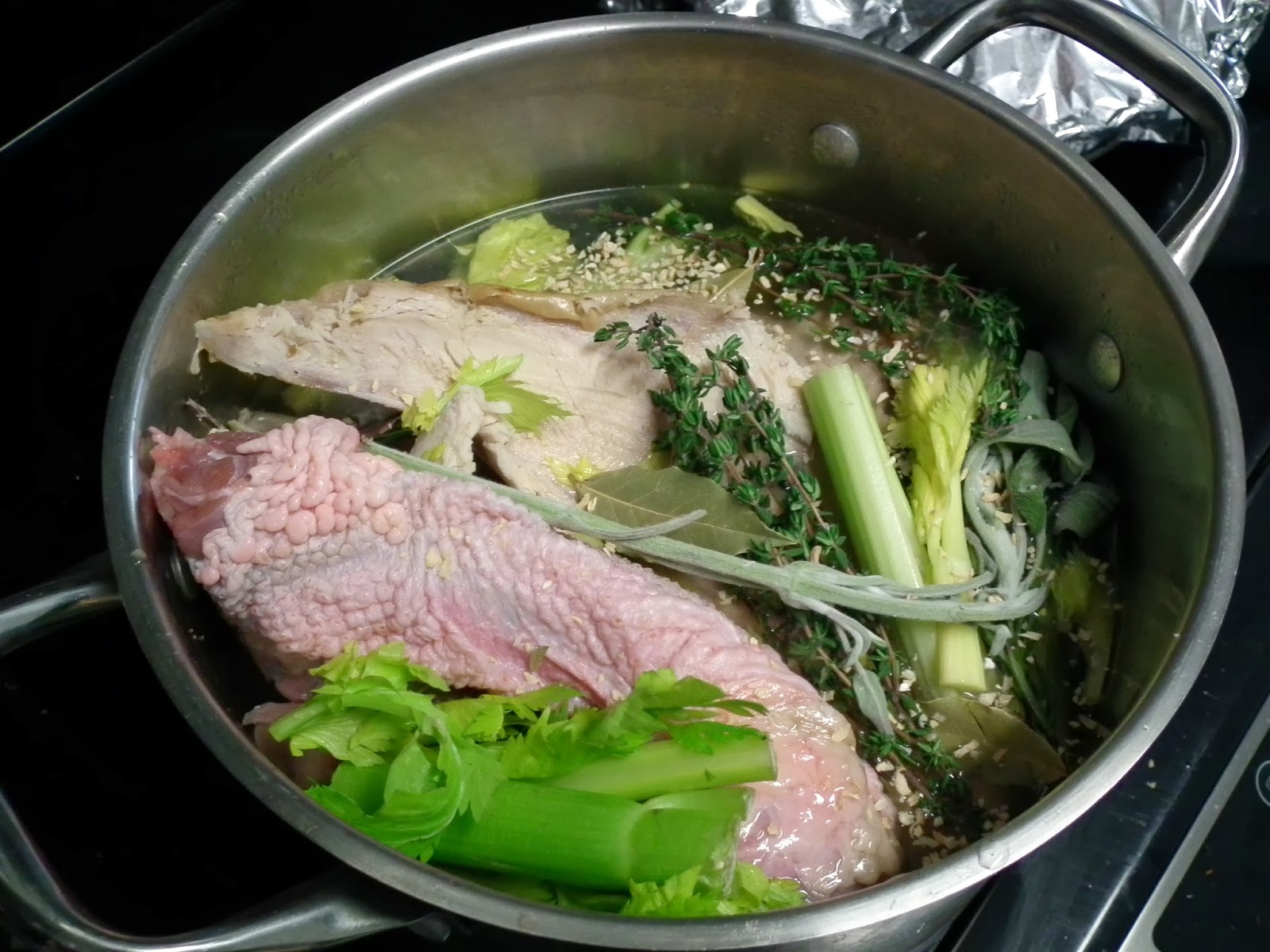 Let it simmer away for 3-4 hours.  Any meat that was left on the bones will fall right off, and you'll be left with a rich, delicious stock. 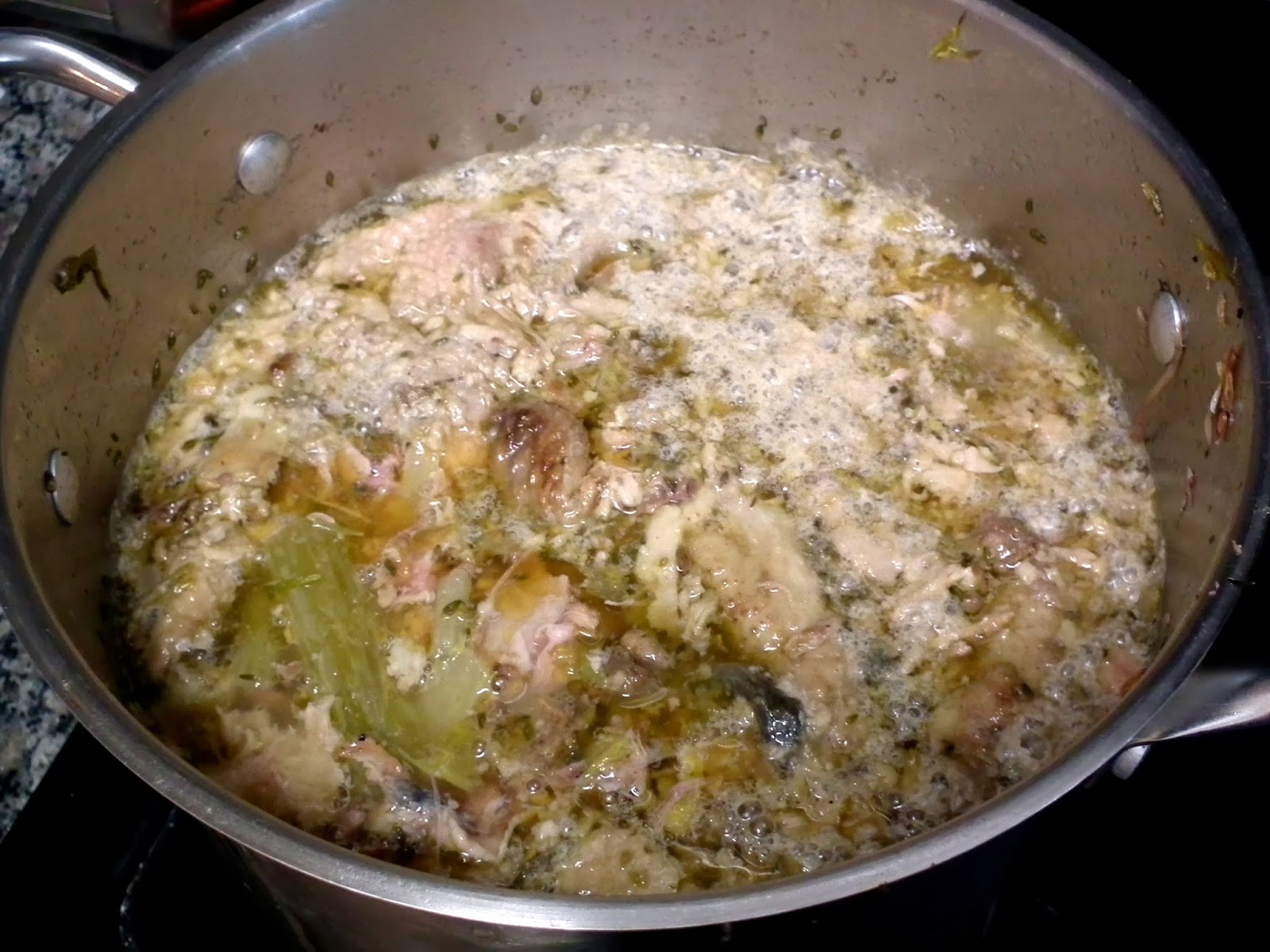 You'll want to first pull out as much meat as you can.  I first tried using a slotted spoon, to separate the meat from the liquid, but that was taking too long.  I then changed up my method, and just poured the contents of a pot through a strainer.  The liquid went into a plastic container, and the meat was in the strainer.  That allowed me to just pick out the celery and any small bones that had separated from the carcass.

Once you've separated out the big chunks of meat, towards the bottom of the pot, we switched to using a finer mesh strainer. 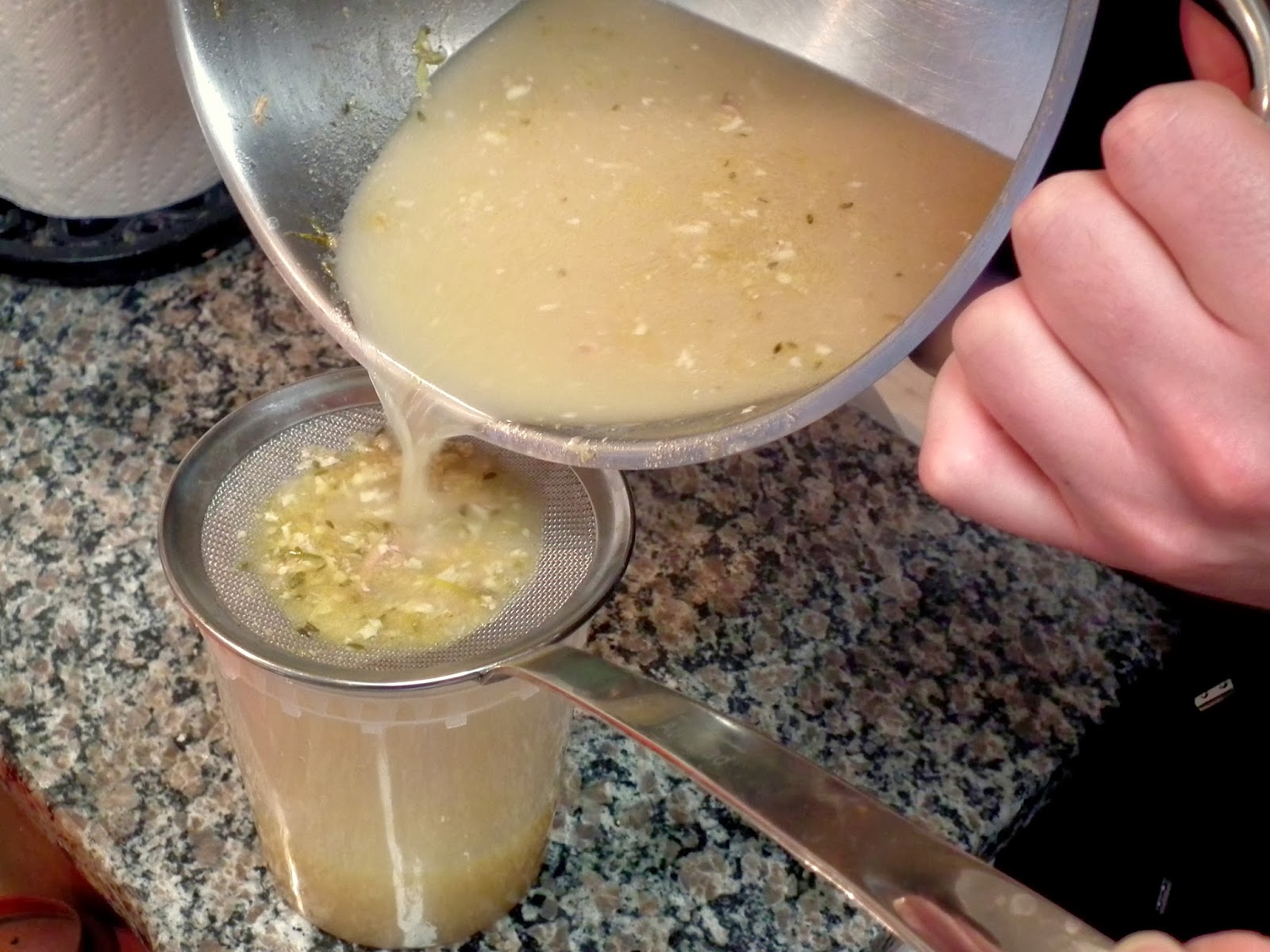 We were left with several containers of stock, and bowl of shredded turkey. 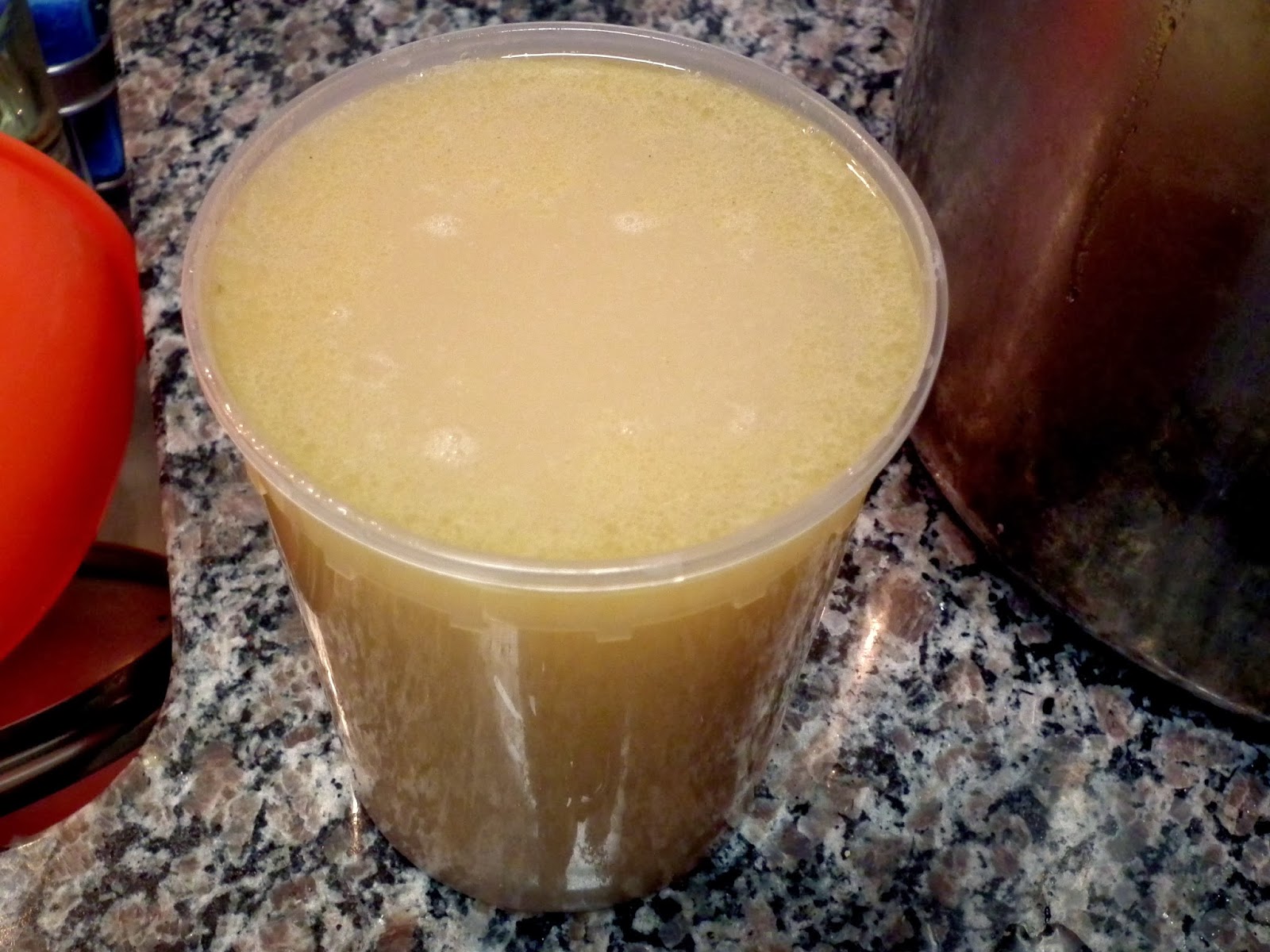 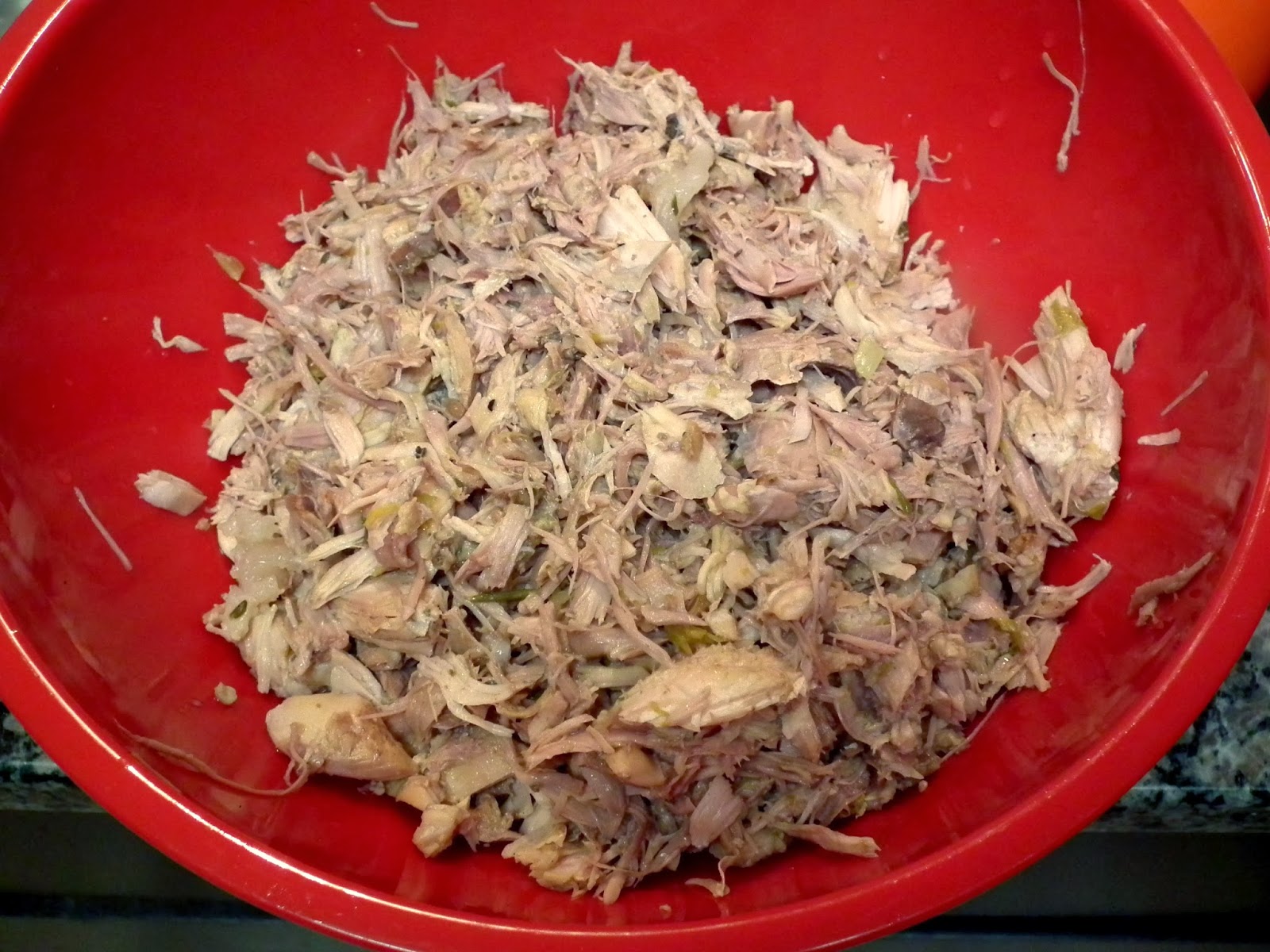 Since we knew we wouldn't be making soup right away, we put the turkey into a plastic bag, and put him in the freezer for safe keeping.  We kept one small container of stock in the refrigerator, but the rest went into the freezer as well.  So now we have the makings of a delicious soup!
Posted by Unknown at 7:25 PM