If Aunt Jemima & Col. Sanders Went On a Date...

...they'd probably eat chicken and waffles.  What better combination of salty and sweet could you ask for?  We drew inspiration from Edward Lee's recipe for adobo chicken and waffles in his latest cookbook, Smoke & Pickles.  We took a few shortcuts from his version because it was a chilly night in the Capitol and we wanted some comfort food in a hurry.  I wanted something green to accompany our chicken and waffles, so we braised some mustard greens, making a homey, southern comfort dinner.

We had some chicken breasts on hand, so we trimmed the fat, and pounded them into slightly thinner cutlets.  This helped reduce the cook time, and keep them moist.  Lee's recipe calls for an adobo marinade, but since we didn't really plan ahead, we just let the chicken soak in some buttermilk while we got the rest of the meal started. 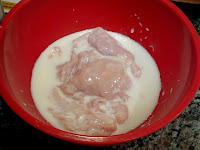 While the chicken soaked, we got to work on the greens.  Originally, we wanted to cook up some collard greens, but our grocery store didn't have them, so we settled for the mustard greens.  For the greens, we used Lee's recipe for kimchi collards as our guide.  We started by crisping up some bacon.  To that, we added a sliced shallot, and a big clove of garlic. 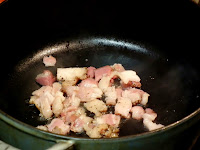 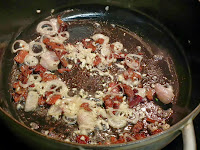 Once the shallot and garlic had some time cook down, we added in our mustard greens.  We got this huge bunch for less than $1.  You can't beat that! 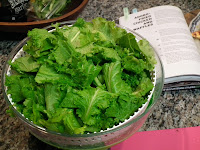 I gave them a quick spin in the salad spinner to get any grit off of them, and then gave them a rough chop.  Then just toss them into your dutch oven with the bacon, shallots, and garlic.  As they started to wilt down, we added in a pat of butter, chicken stock, a splash of soy sauce, and a splash of apple cider vinegar.  Since we didn't have any kimchi on hand, we added in a bit of sriracha sauce for spice.  Give everything a good toss, so all the liquids combine, your butter melts, and the greens are tossed in the liquid.  Then we just put a lid on it, and let it simmer for about 30 minutes. 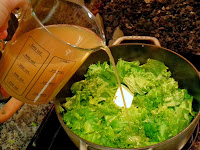 Now back to the chicken.  For the breading, we used a combination of flour and panko, and added some adobo spice to replace the adobo marinade that we didn't use, paprika, salt, pepper, and a bit of our homemade bbq rub.  Once your chickens are breaded, just drop them into the oil to fry up. 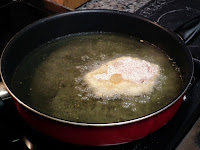 While Justin took care of frying the chickens, I handled the waffles.  You can use any waffle batter recipe you like.  Ours used buttermilk, for some tang, as well as some paprika and black pepper, to make them a little more savory. 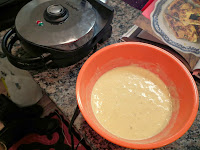 As our waffles and chickens finished up, we placed them on a wire rack and popped them into the oven to keep them warm and crispy.  If you put them directly onto the baking sheet, the bottoms will get soggy.  Putting them on the rack allows the air to circulate around them, keeping all sides crispy.  Plus, putting the chicken on the rack allows the excess oil to drip off. 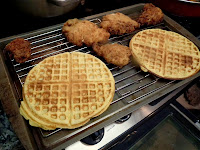 Once all of your waffles are made and chickens are fried, it's time to eat!  We topped ours with some maple syrup.  We also had some leftover chipotle yogurt sauce, so we used that as a dipping sauce, to add a little smokiness and balance out the sweet syrup. 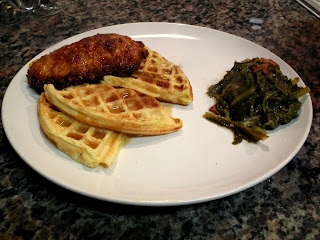 While we took a few shortcuts and used breast meat, the end result held up in the taste department.  The chicken was perfectly seasoned, and tender on the inside while nice and crispy on the outside.  The waffles had a perfect balance of flavor from the buttermilk and spice, and came out crisp with a light and soft interior.  This was some definite southern comfort with an Asian twist that was perfect for a cold night.
Posted by Unknown at 1:23 PM