In honor of it being National Soup Month, we rounded up a list of the soups that we've featured on the blog thus far.  So if you're experiencing some frigid weather like we are, you can opt for the warm soups.  And if you're lucky enough to be in a warmer climate, you can go for the cold soups.  Something for everyone!

Cold soups to cool you down...
* Chilled Pea Soup
* Gazpacho

And if those aren't enough, we're coming at ya with a hearty French onion soup to get through these winter months.  This recipe came from our friends at WellFed Hospitality Group when we attended their first Feastly dinner, a meal paying homage to Julia Child. (you can read about another Feastly meal here)

You'll want to start by thinly slicing 10 onions.  Our onions were quite large, so we only used 8. 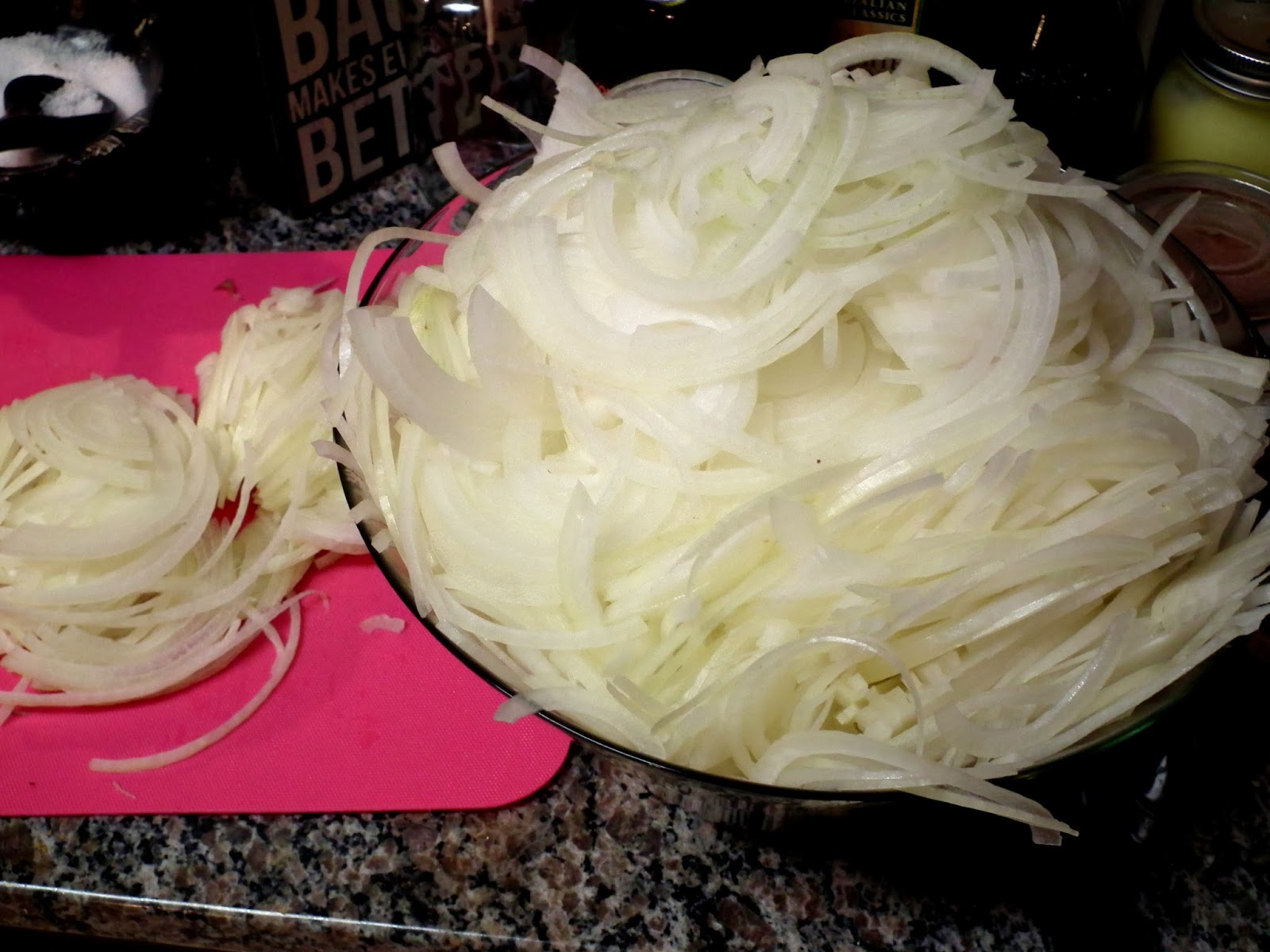 While you're slicing your onions, you can crisp up about 1/4 cup of bacon.  Once they've crisped up, add your onions to the pot, along with about half a stick of butter. 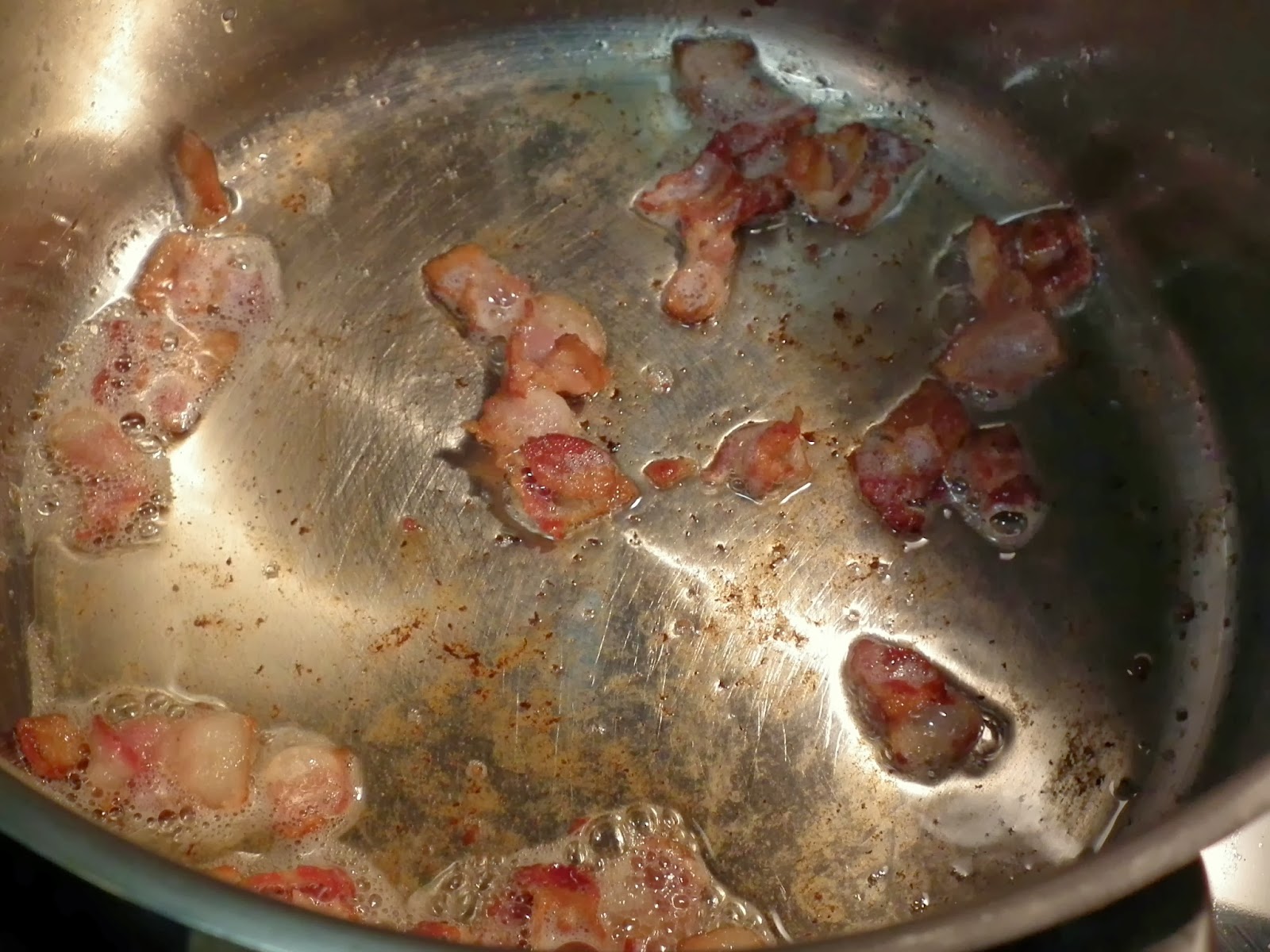 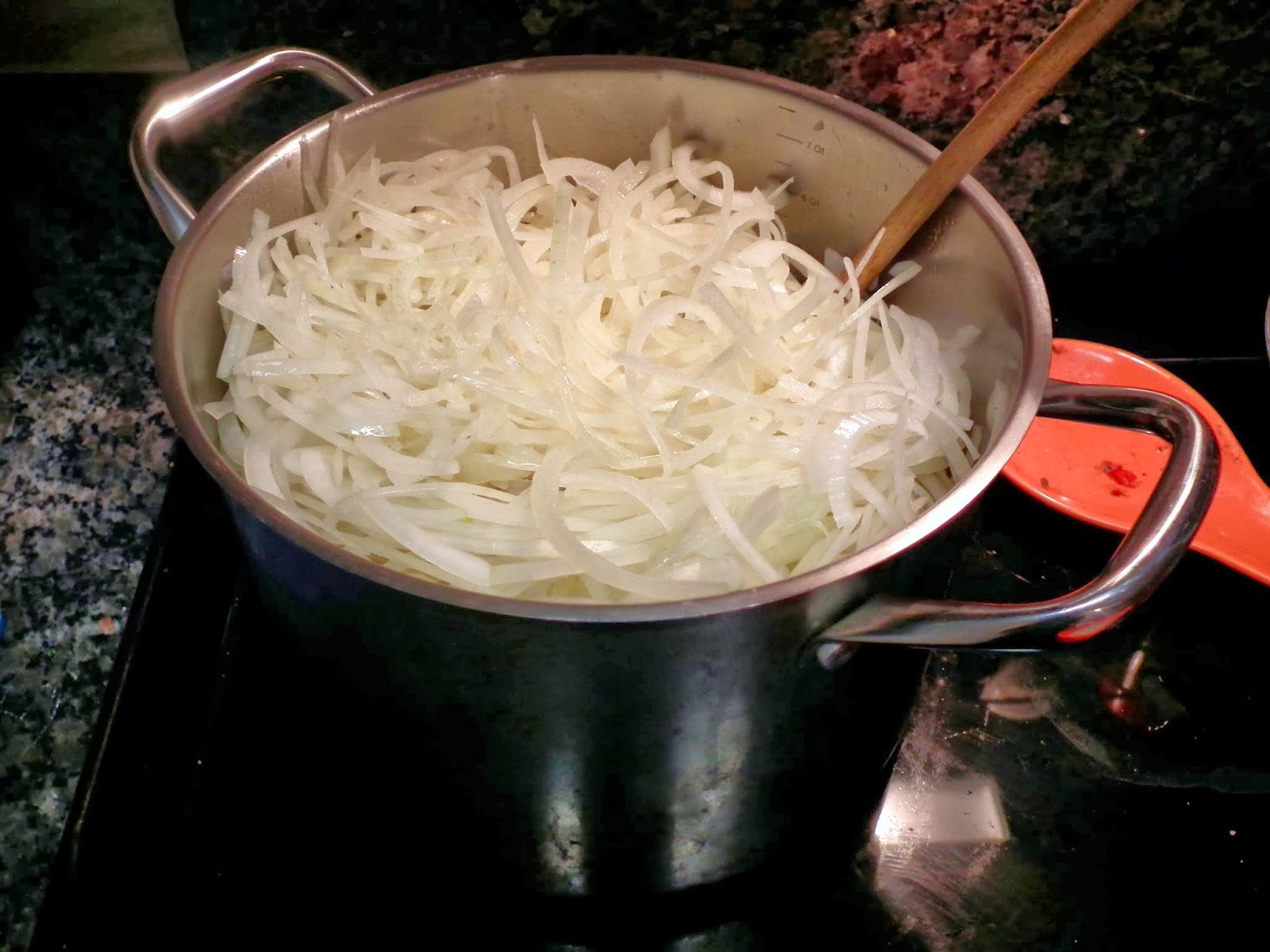 As you can see, our stock pot was overflowing with onions.  From this stage, it will take a good 45 minutes for your onions to cook down and caramelize.  As best you can, try to toss your onions around so they all get coated in butter, and cook through.  As they cook down, they'll release a lot of water, which needs to evaporate before your onions can really caramelize. 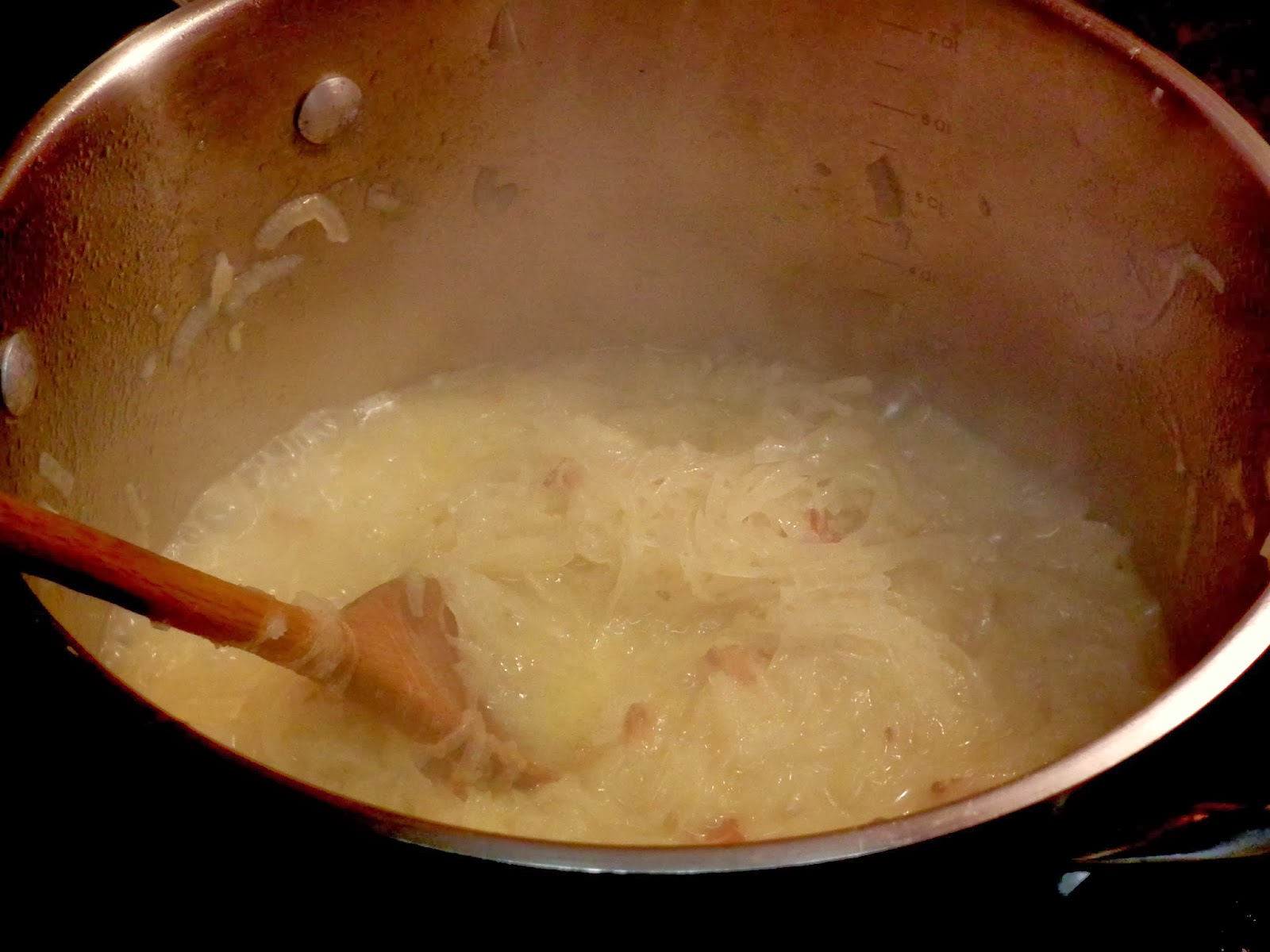 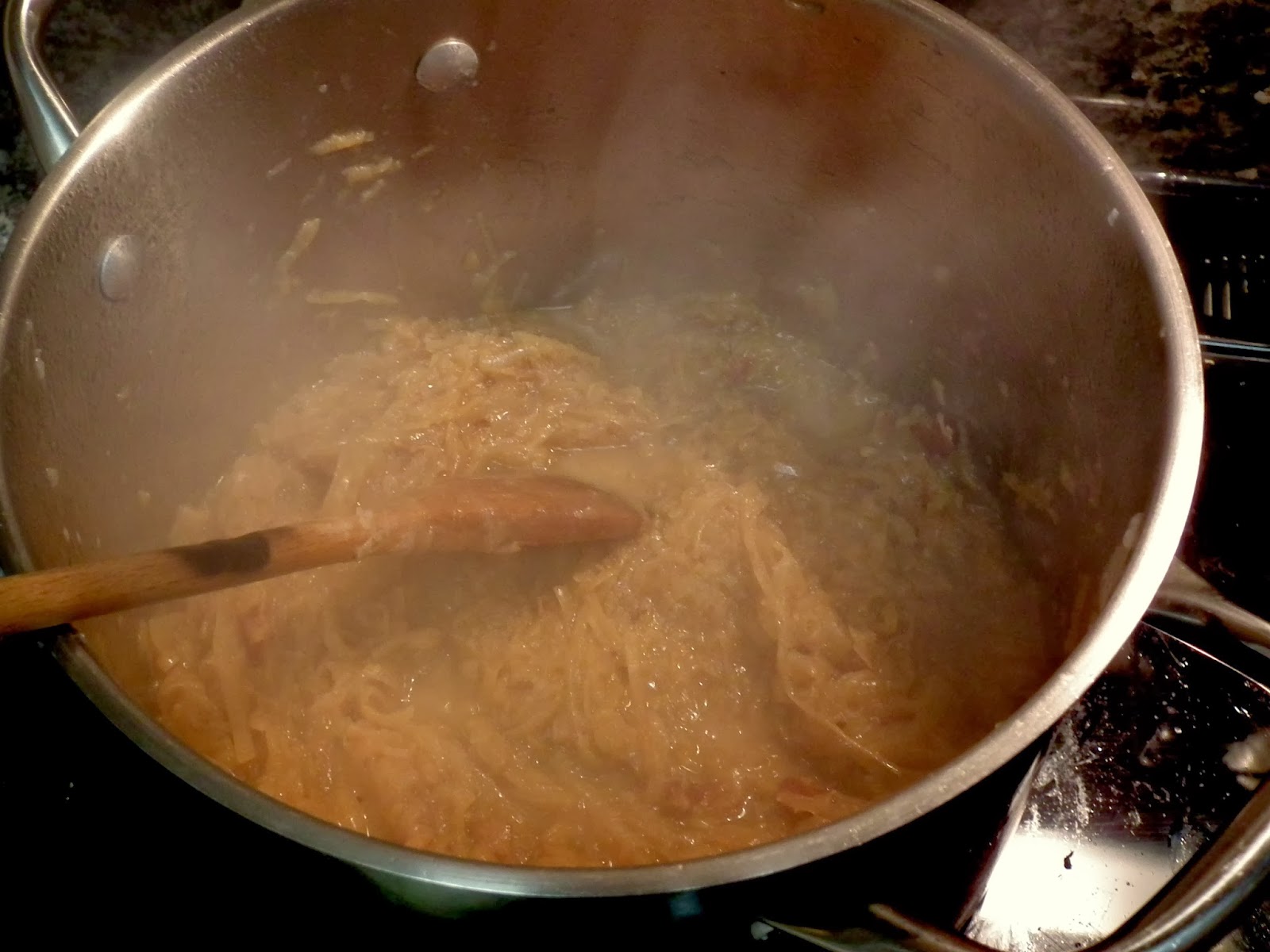 As you can see, they cook down quite a bit, and turn a nice golden brown color.  At this point you can deglaze your pot.  The recipe calls for a splash of brandy and some white wine, but we didn't have any on hand.  Instead, we used some Boatswain Chocolate Stout that we had on hand.  The beauty of this beer is that for just $1.99, you get a 22oz. bottle of pretty decent beer.

Once you've deglazed your pot, add in 2 quarts of beef stock and some thyme.  To help give it a richer flavor, we also used some veal demi glace.  Let this simmer and reduce for about 20 minutes. 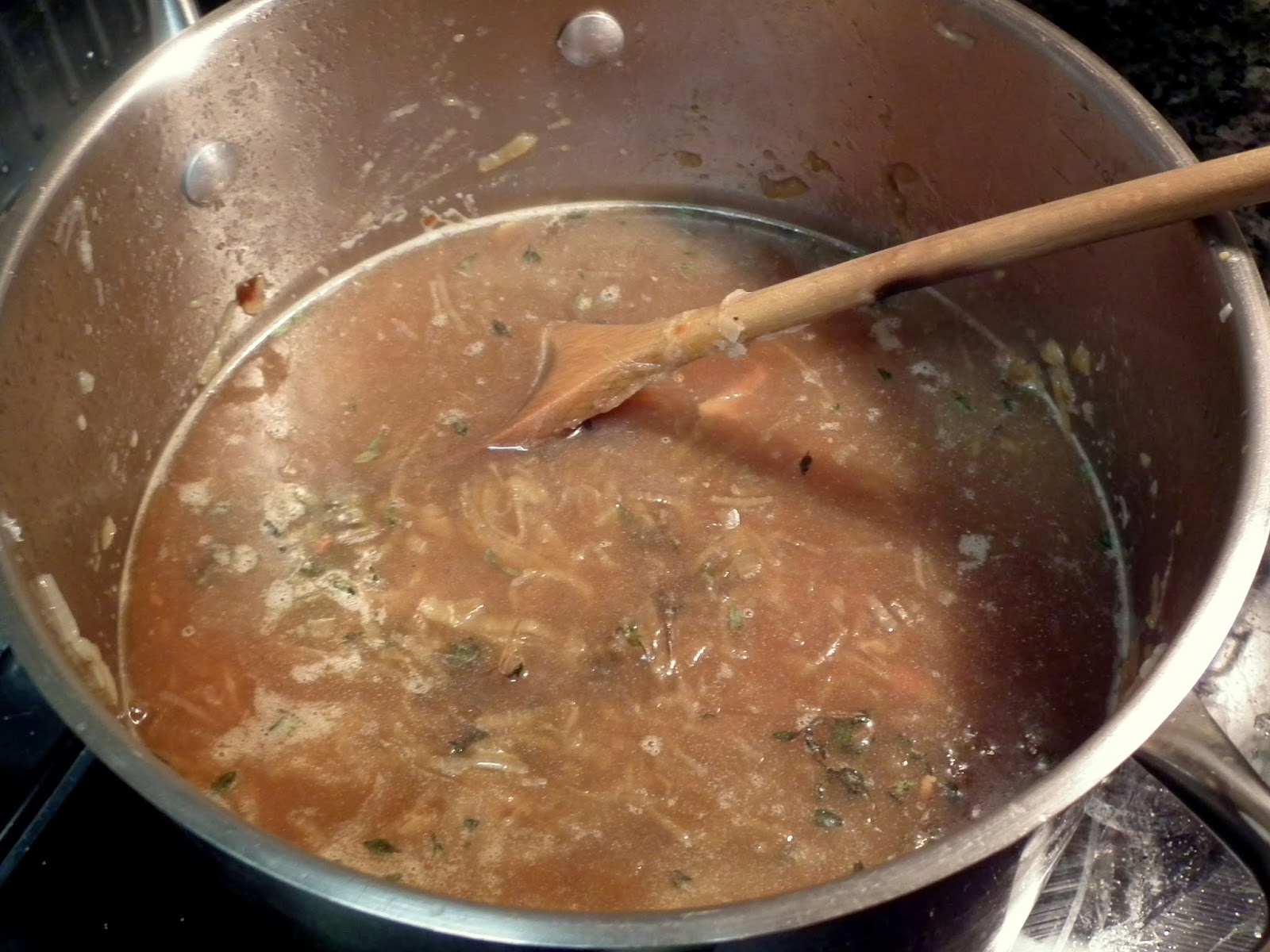 One of my favorite things about French onion soup is the bubbly covering of cheese that covers the bowl.  Since we don't own any of the little crocks like restaurants have, we had to improvise.  We picked up a nice loaf of French bread and toasted some slices, each topped with a little pile of gruyere cheese.  Once the cheese had melted, they were nice little croutons to float on top of our soups.  We also sprinkled some cheese directly into the soup and let it melt in. 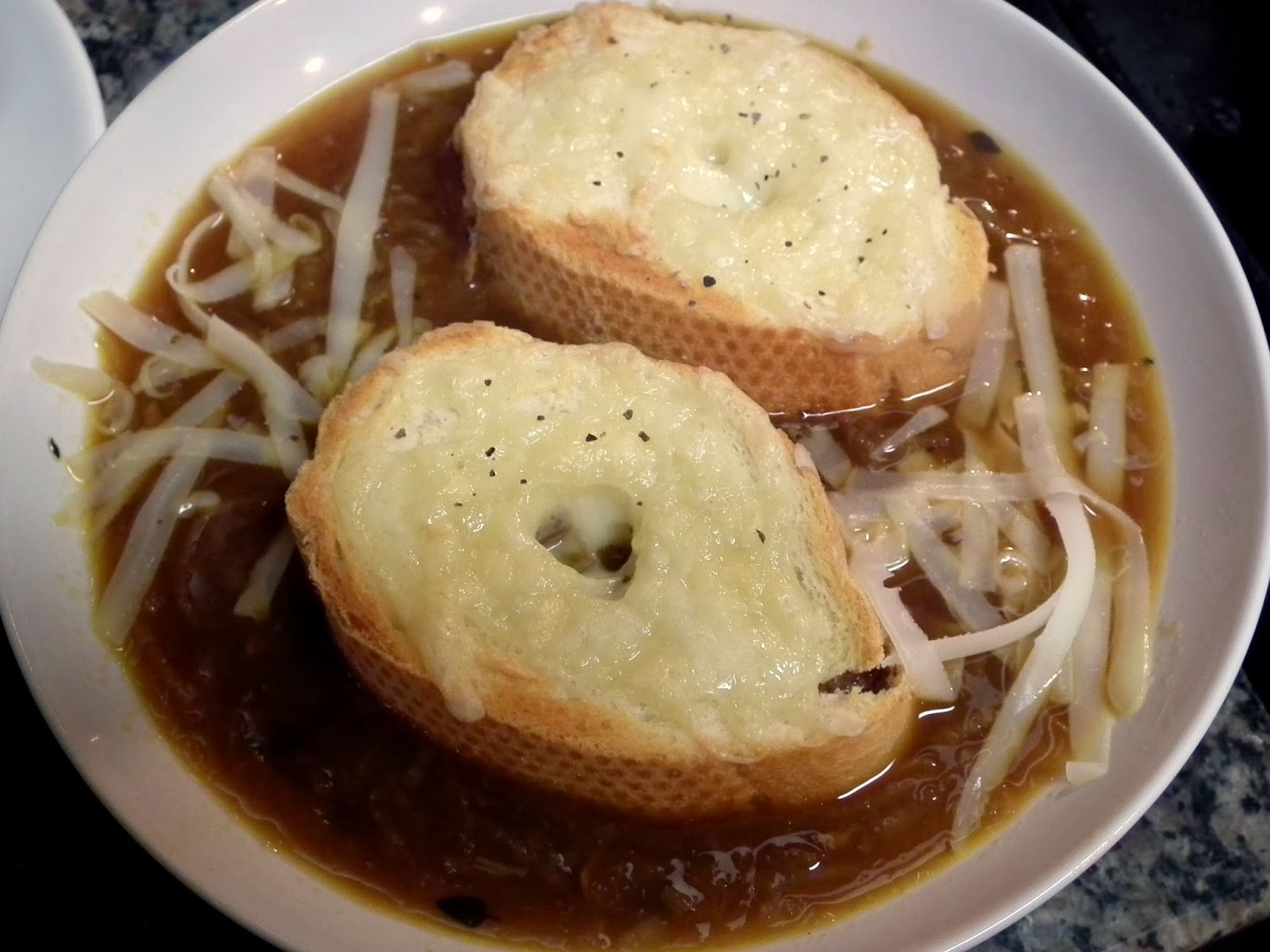 Although caramelizing onions takes a while, the end product is well worth it.  You're entire house/apartment will end up smelling like caramelized onions (even my bath towel picked up the scent!), but it's a delicious, hearty soup that will get you through the cold winter months.
Posted by Unknown at 7:37 PM