As you may have seen on Facebook last night, we had a delicious summer picnic spread that we enjoyed while taking in an outdoor movie (if you didn't see it, you should "Like" our Facebook page!).  One of the things I love about summer in DC is that on any night of the week, you can see an outdoor movie.  Most neighborhoods are jumping on the wagon, and you're sure to find at least 1 movie each week that you want to see.  As foodies, we had to go above and beyond a bucket of fast food chicken or prepared food from the grocery store.  We prepared an awesome spread for movie without going overboard like this:
One of the things I'm not a huge fan of when it comes to summer in DC, is the sweltering, humid weather.  As soon as I step outside, I feel sweaty and gross, and the last thing I want to do is stand over a stove, or in front of a hot oven.  The perfect solution is a cold soup!  And since we picked up a ton of tomatoes in this week's share, gazpacho was the natural choice. 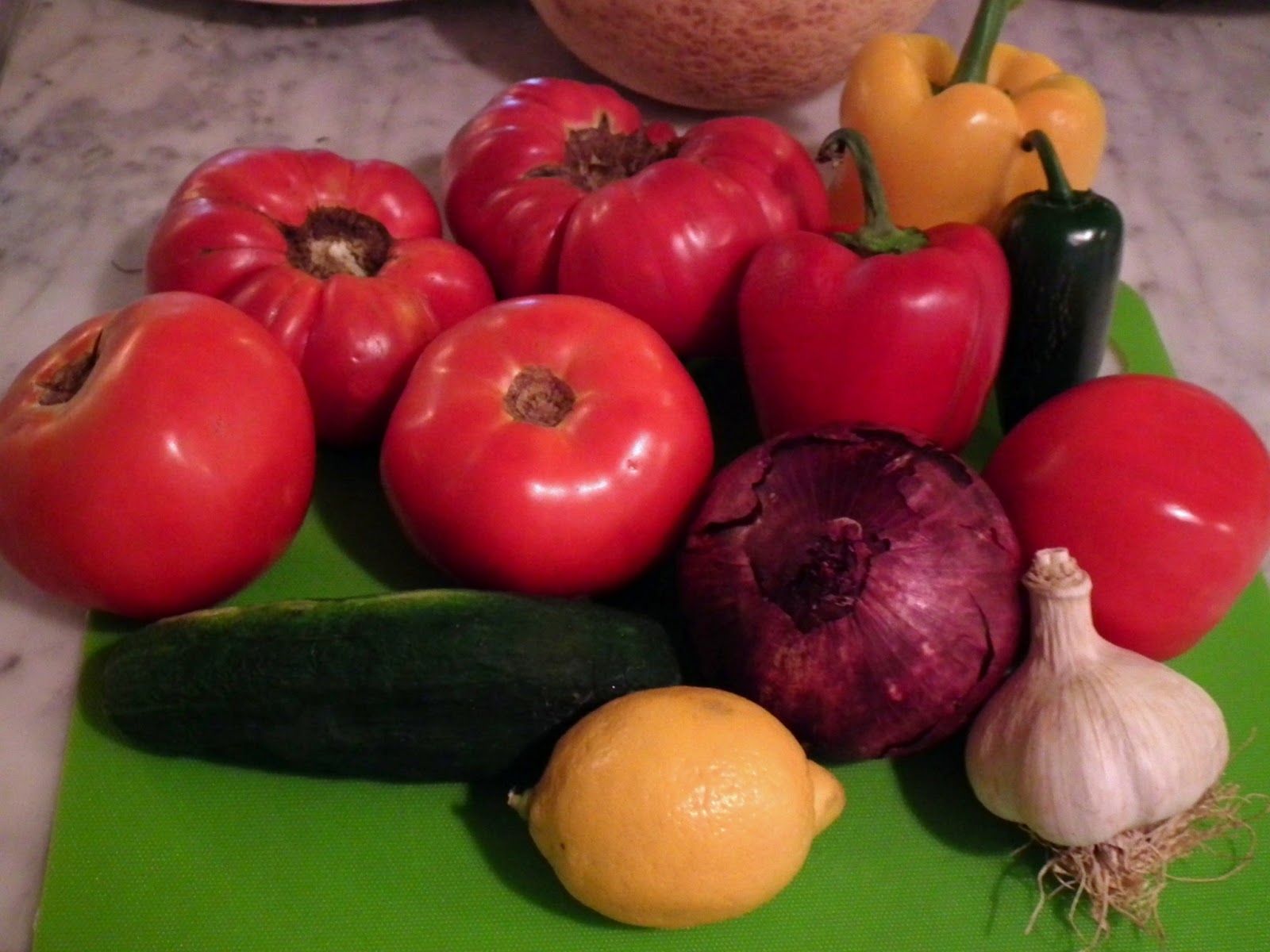 For a little guidance, we found this recipe.  As always, we put our own spin on it.  But to get you started, gather all your veggies, a good knife, a big bowl, and get to chopping!  Make sure you collect all the seeds and juices that may leach out from your veggies as you're cutting them.  That will help thin out your soup.  I left the skins on all of the veggies, except for the cucumber.  He was the only guy that got peeled.  Because we're both huge fans of garlic, we added about 5 cloves.  And since we had a jalapeno on hand, we chopped that up, as opposed to using hot sauce, as the recipe called for. 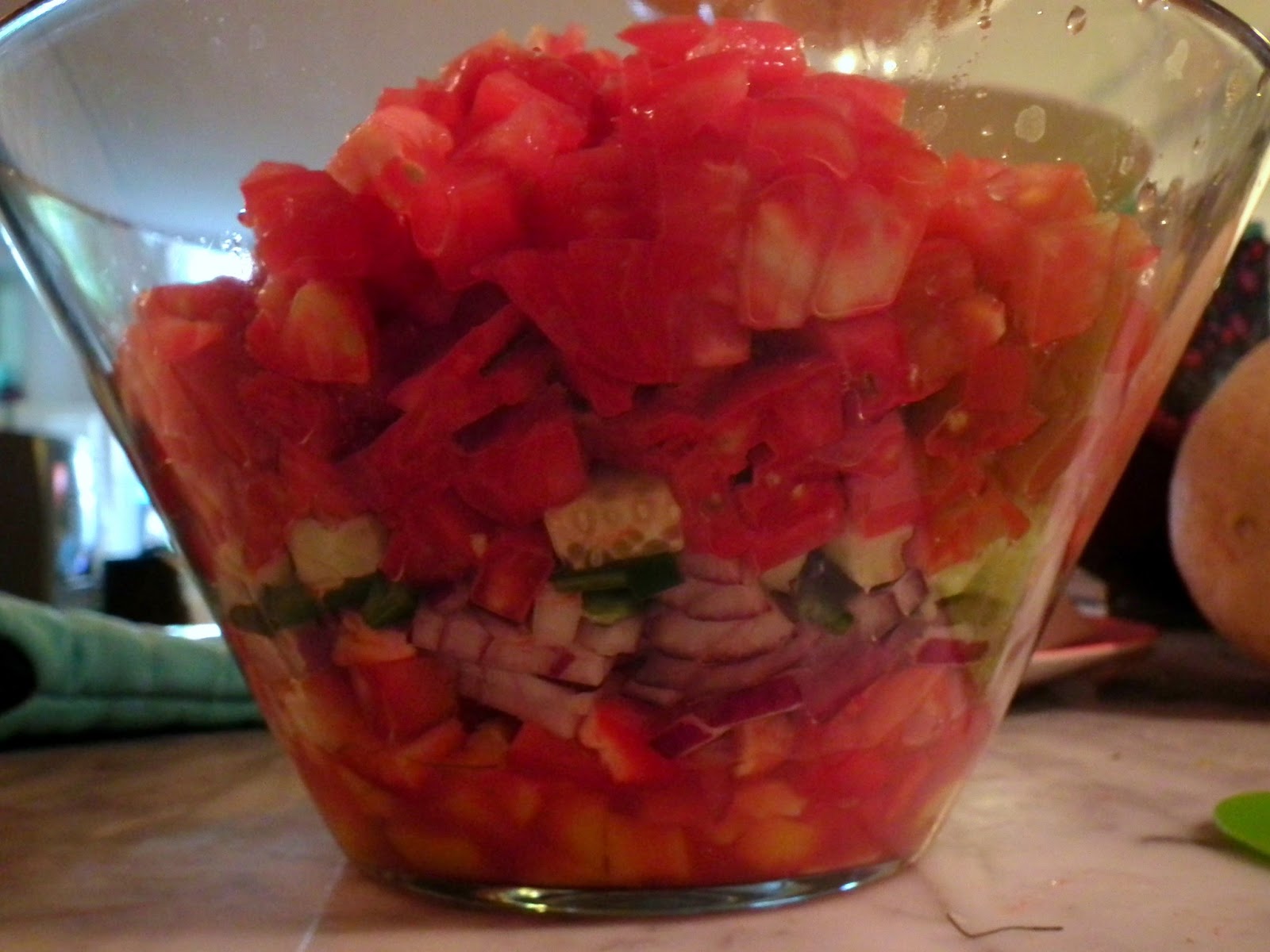 Once you're done chopping, you'll have this beautiful bowl of fresh summer veggies!  The recipe instructs you to just get your hands dirty, and squish all the veggies together, but I don't think that's an ideal method, considering the peppers and onion aren't as soft as the tomatoes.  Plus, we wanted more of a soup consistency, as opposed to a chunky salsa consistency.  So I pulled out the immersion blender and got to work.  It didn't take long to break down all the veggies either. 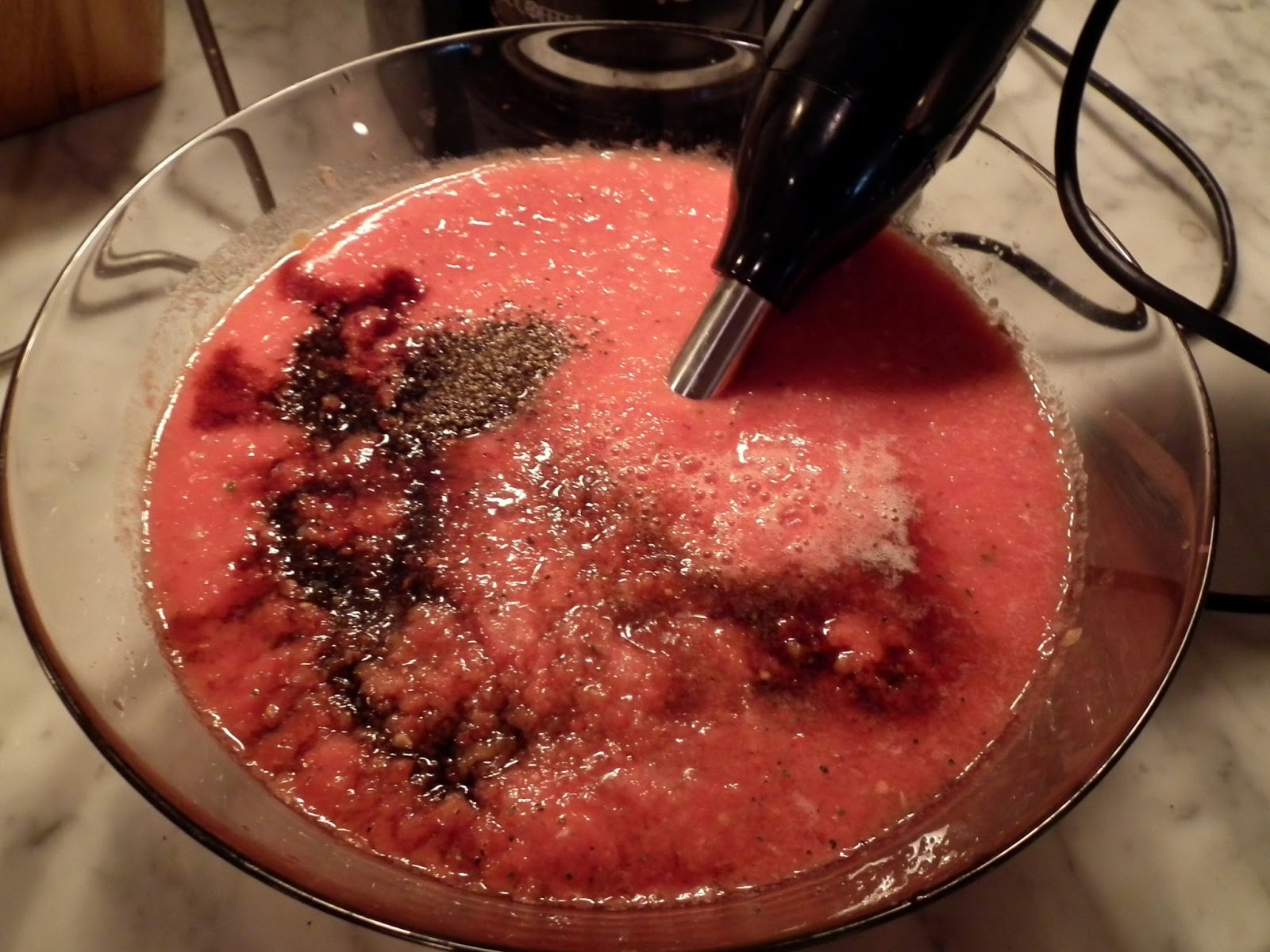 Here's where you really need to taste and add seasonings, as needed.  I started with salt, pepper, and juice of half the lemon.  I started out conservative on the lemon but ended up using the whole thing.  Give it another whirl with the blender, and taste again.  If it's not spicy enough, add another jalapeno, or a splash of hot sauce.  I also threw in the balsamic and red wine vinegars, olive oil, and a splash of worcestershire sauce to balance out the sweetness of the tomatoes. 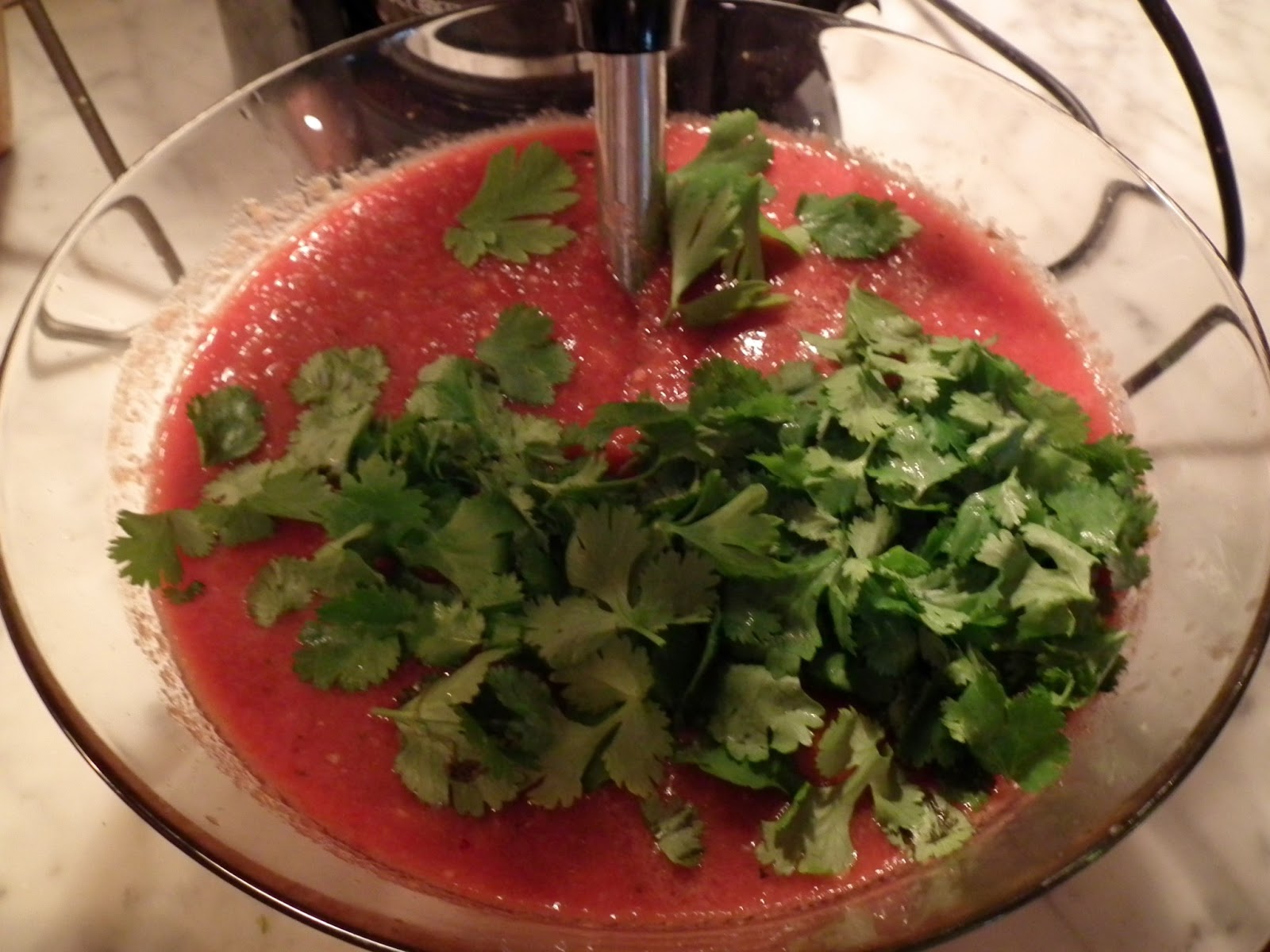 To top it all off, we threw in a bunch of fresh cilantro and parsley.  Again, blend it all up and taste it to make sure the flavor is right where you want it.  Then just pop it in the fridge to chill until you're ready to eat. 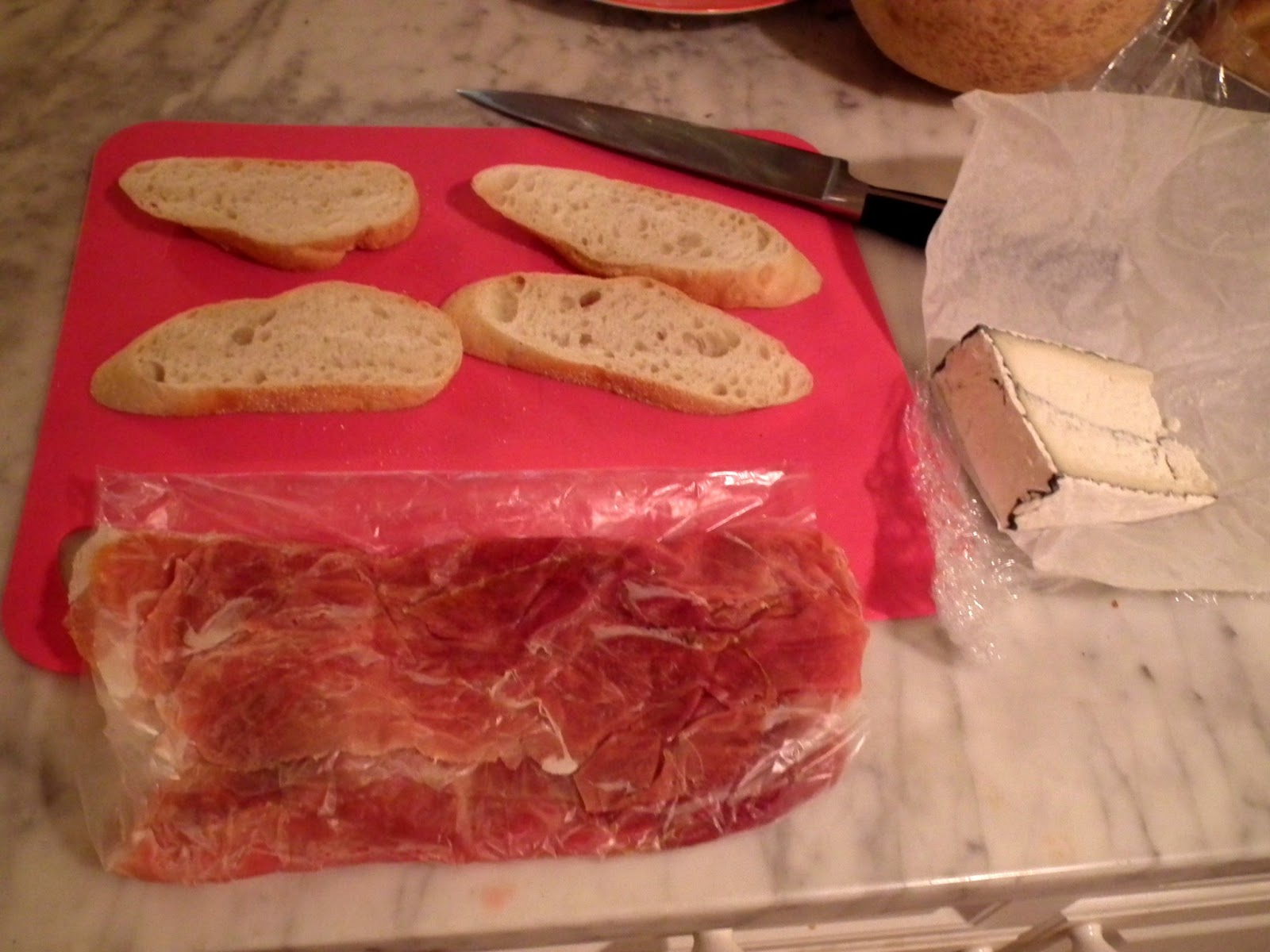 No tomato soup would be complete without a grilled cheese sandwich to go with it.  But we couldn't just go with any ol' grilled cheese.  We had to step up our game for all of you! So we chose a nice baguette for our bread, some prosciutto, humboldt fog cheese, and some arugula.

As with any other sandwich, just start building.  I failed to put cheese on both sides of the bread initially, and they wouldn't stick together, so it's in your best interest to do this right off the bat.  The humboldt fog is a mold-ripened goat cheese, but it has a little less tang and a little more smokiness than a typical goat cheese.  It's somewhat soft and crumbly, but it was easy enough to spread on the bread, and melted into the meat and arugula.  With your sandwiches assembled, melt some butter in a pan, and get to toasting! 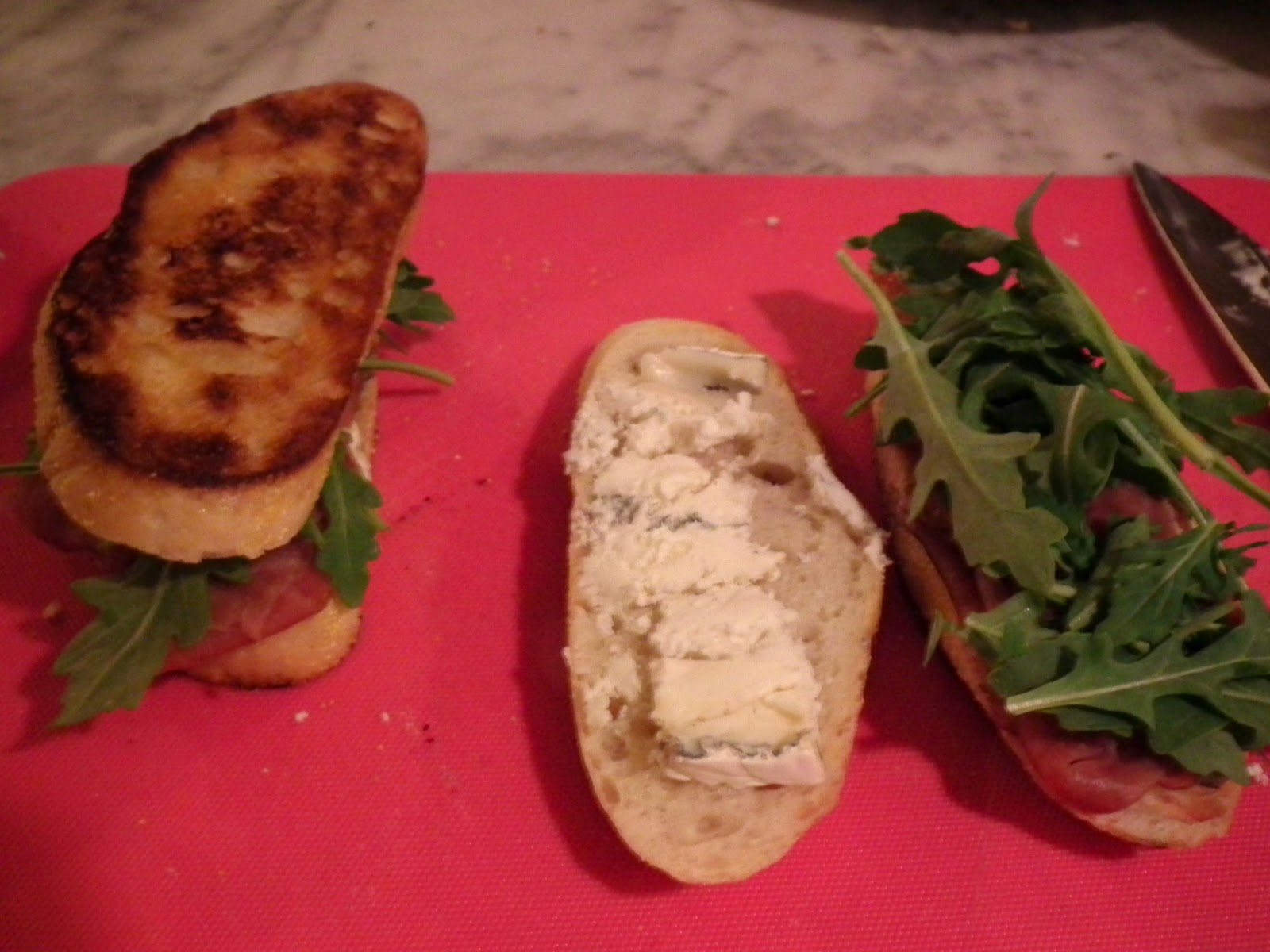 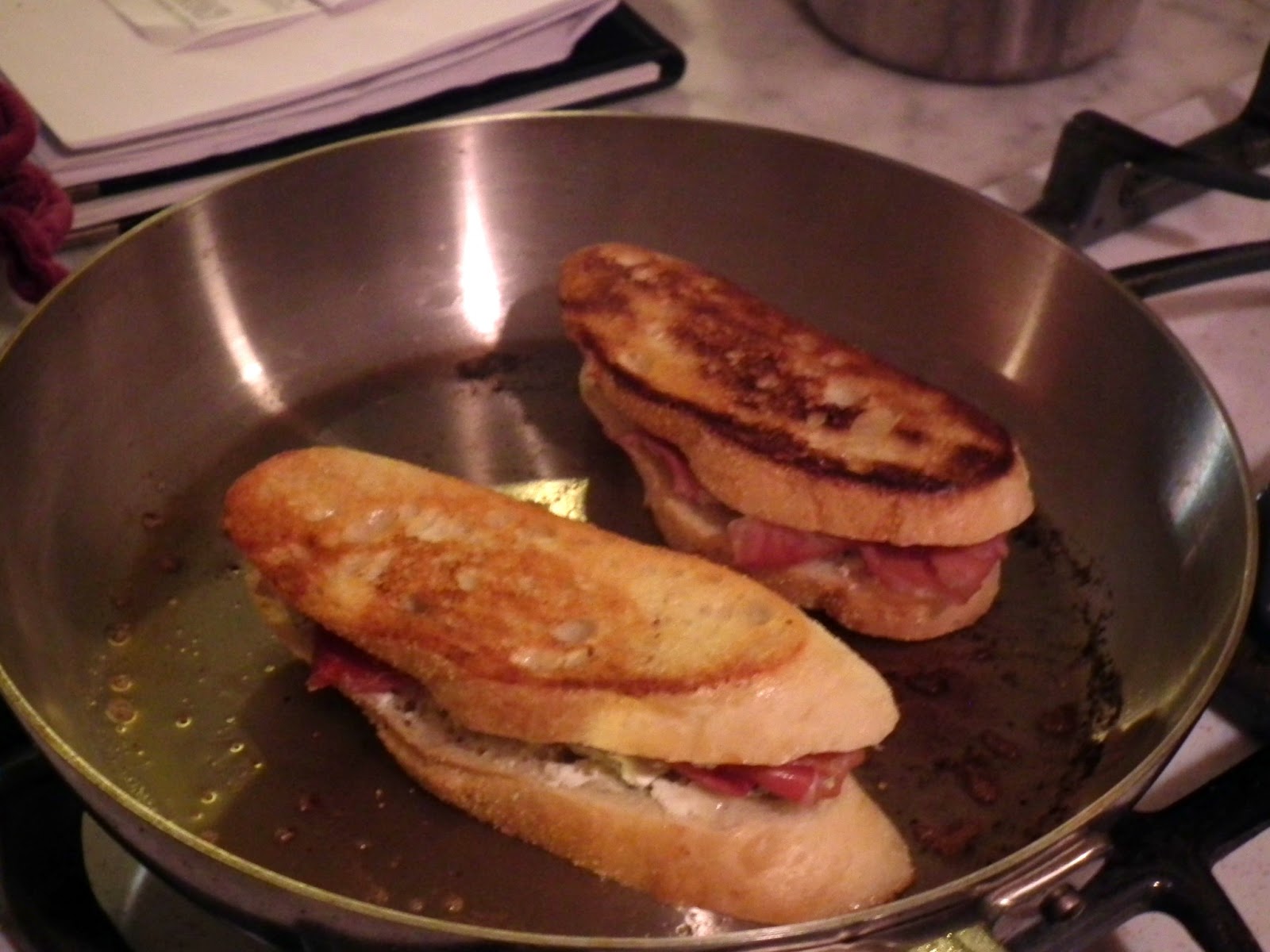 If you're packing these treats up for a picnic, let the sandwiches cool down a bit before wrapping them in foil, or putting them in a plastic container.  You don't want them to sweat and get all soggy.

All that was left was to pop some popcorn (truffle parmesan popcorn, that is!), throw a couple beers in the cooler, and a couple peaches for dessert! 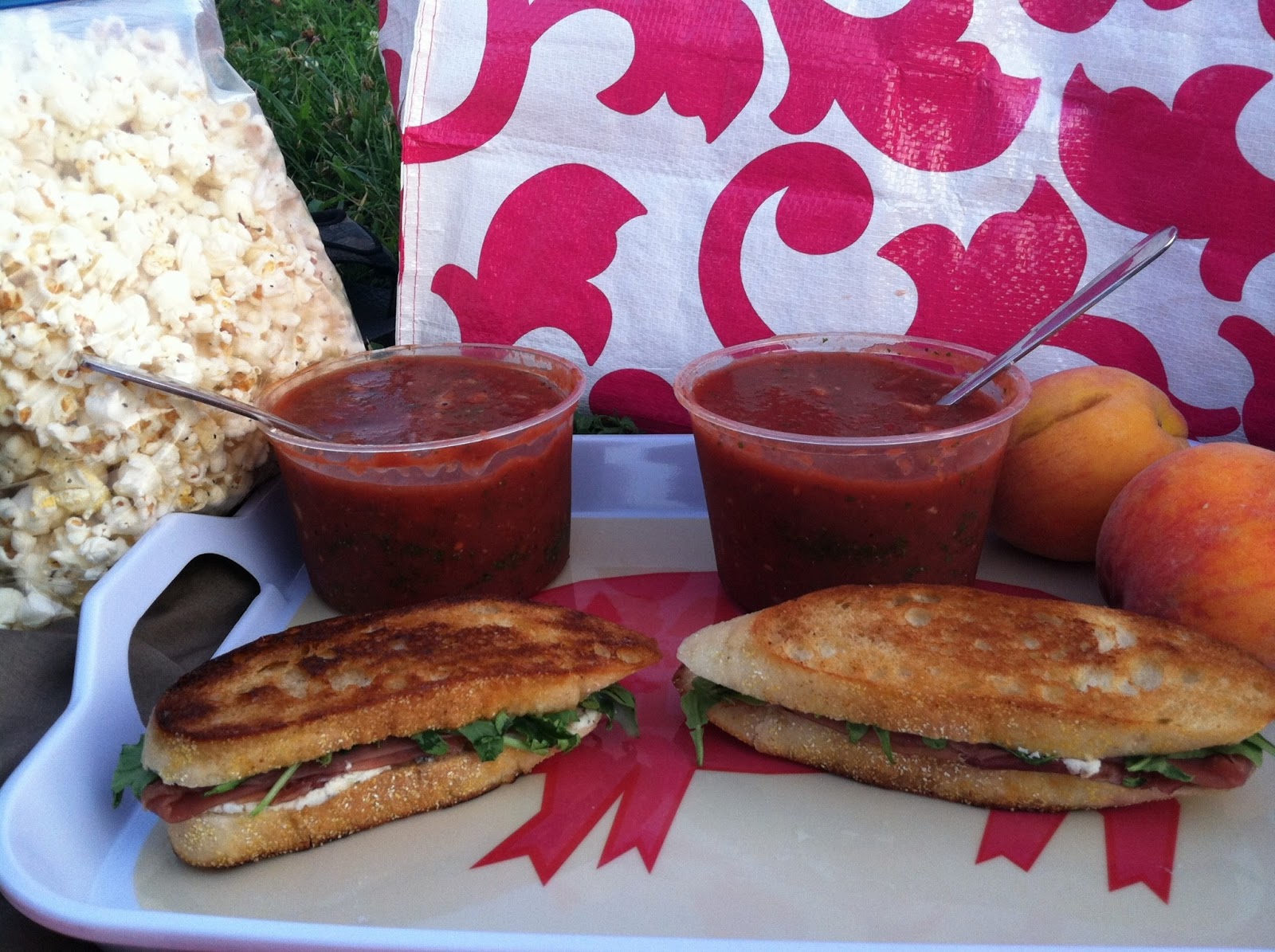