4th of July wouldn't be complete without throwing something on the grill or in the smoker, so we did just that.    We fired up the smoker with cherry and hickory wood chips, and got it nice and warm for our brisket.  For our smoking liquid, we filled the pan with a mixture of water and beer.  While the smoker heated up, we prepped our brisket.  We started with a dry rub, consisting of all these tasty spices: 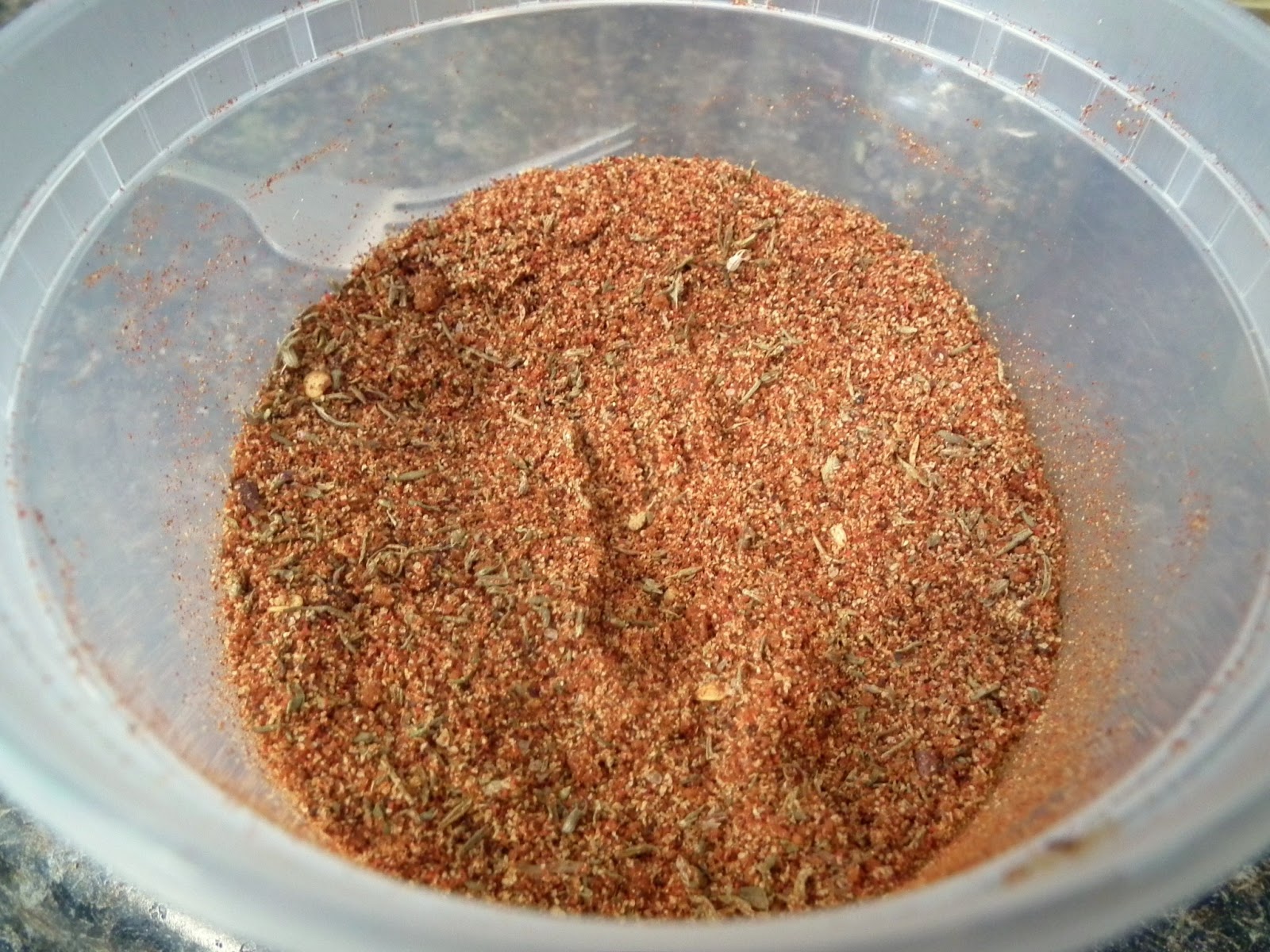 We really just poured and mixed until it tasted great.  We ended up with about 1.5 cups of the spice rub, which was plenty to rub on the brisket and add to the sauce, while still having extra for next time.  Our rub had a subtle heat that came at you from the back.

We poured a bit of vegetable oil on the brisket, and rubbed him down with our spice mixture.  Be sure to massage it in to help tenderize the meat too. 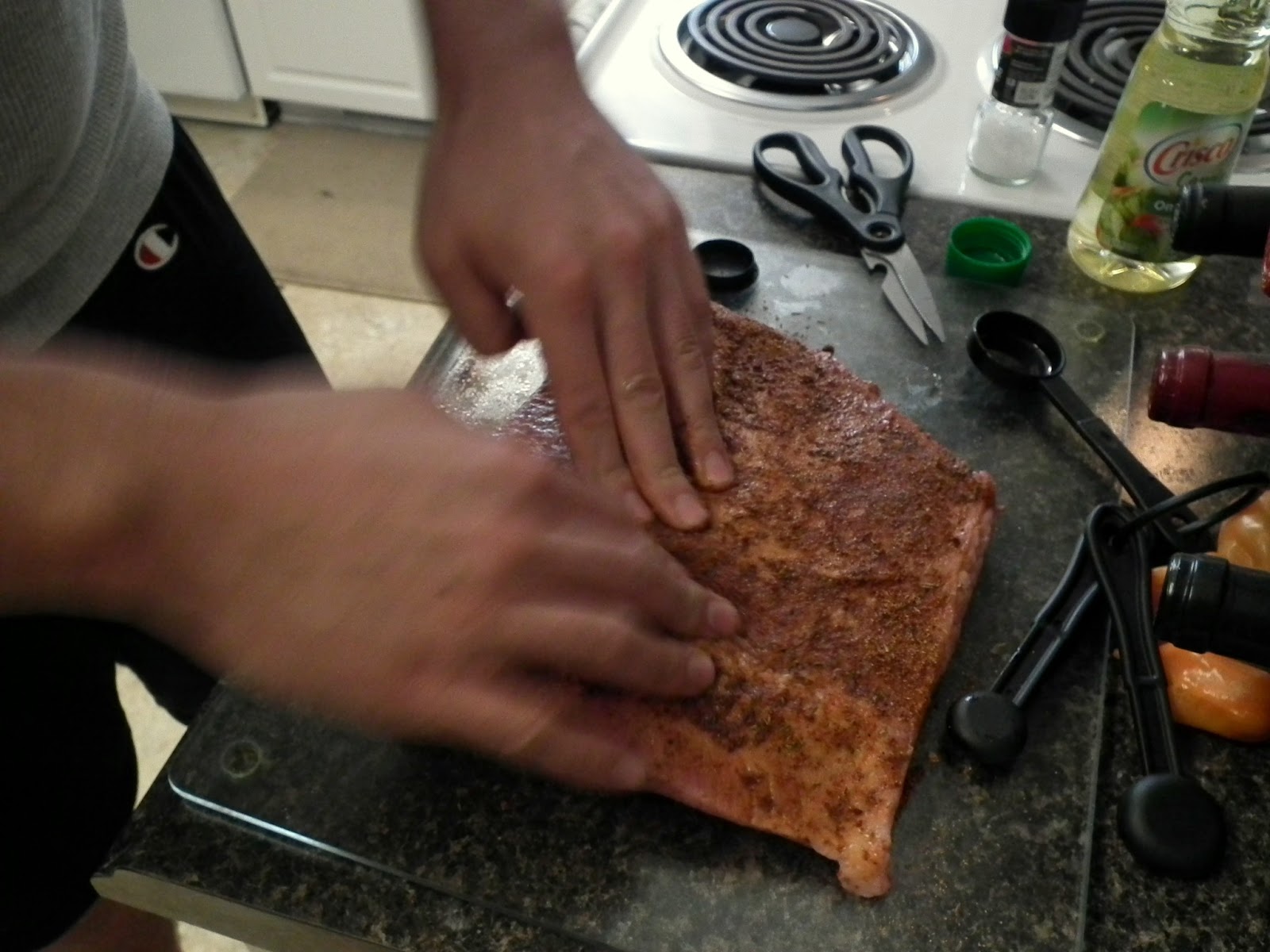 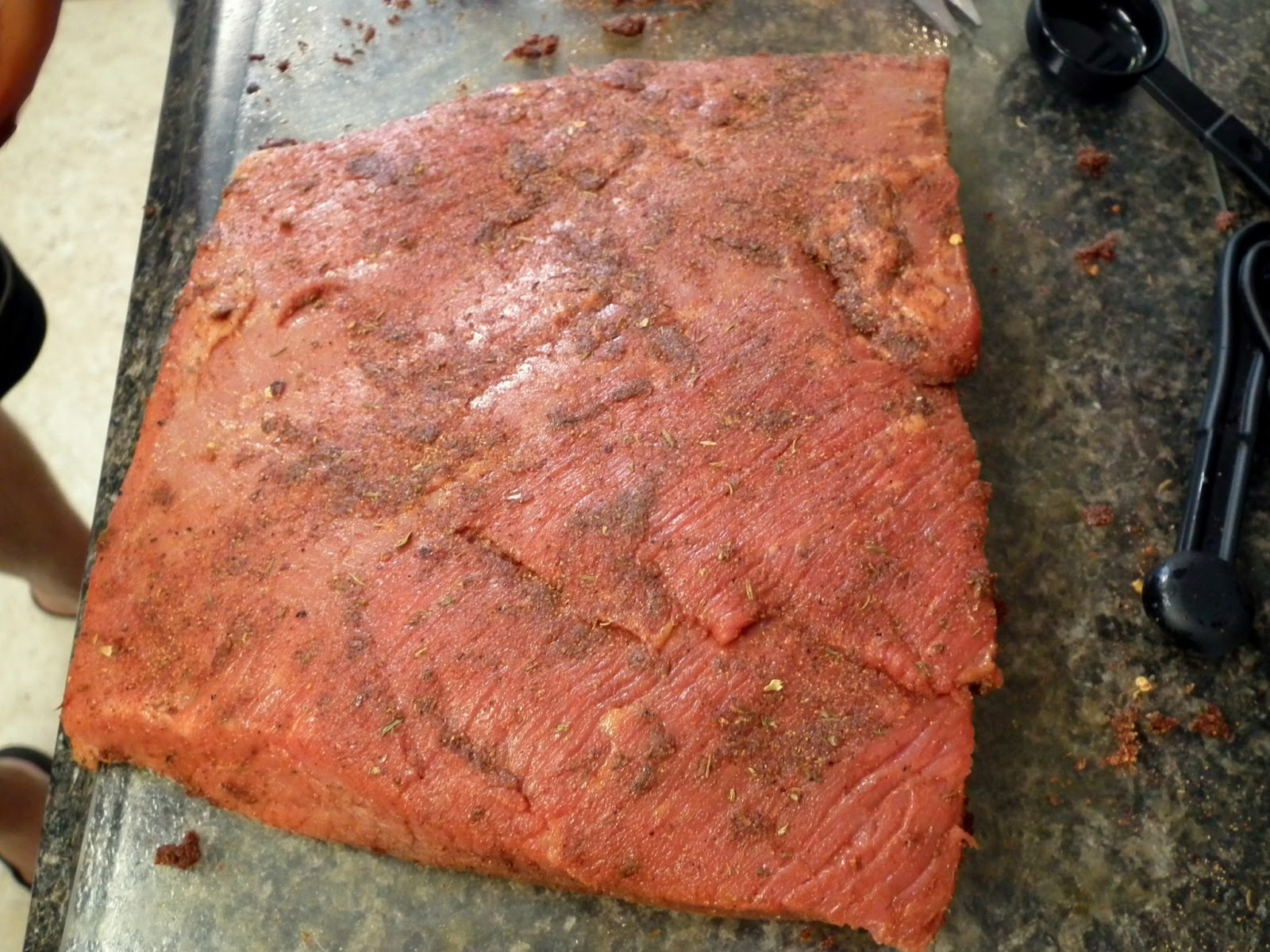 Then you're ready to throw it on the smoker.  As it cooks, make sure to periodically check on it.  We didn't have a sauce mop, but we did have a squirt bottle with some apple cider vinegar, Worcestershire, and a dash of soy sauce and liquid smoke,  which we used to keep the meat moist and give it a bit of added tang.  We put our meat on fat-side up.  Conventional wisdom from the pit dictates that by smoking fat side up, the delicious beefy drippings permeate the meat and wash over it as you baste it. 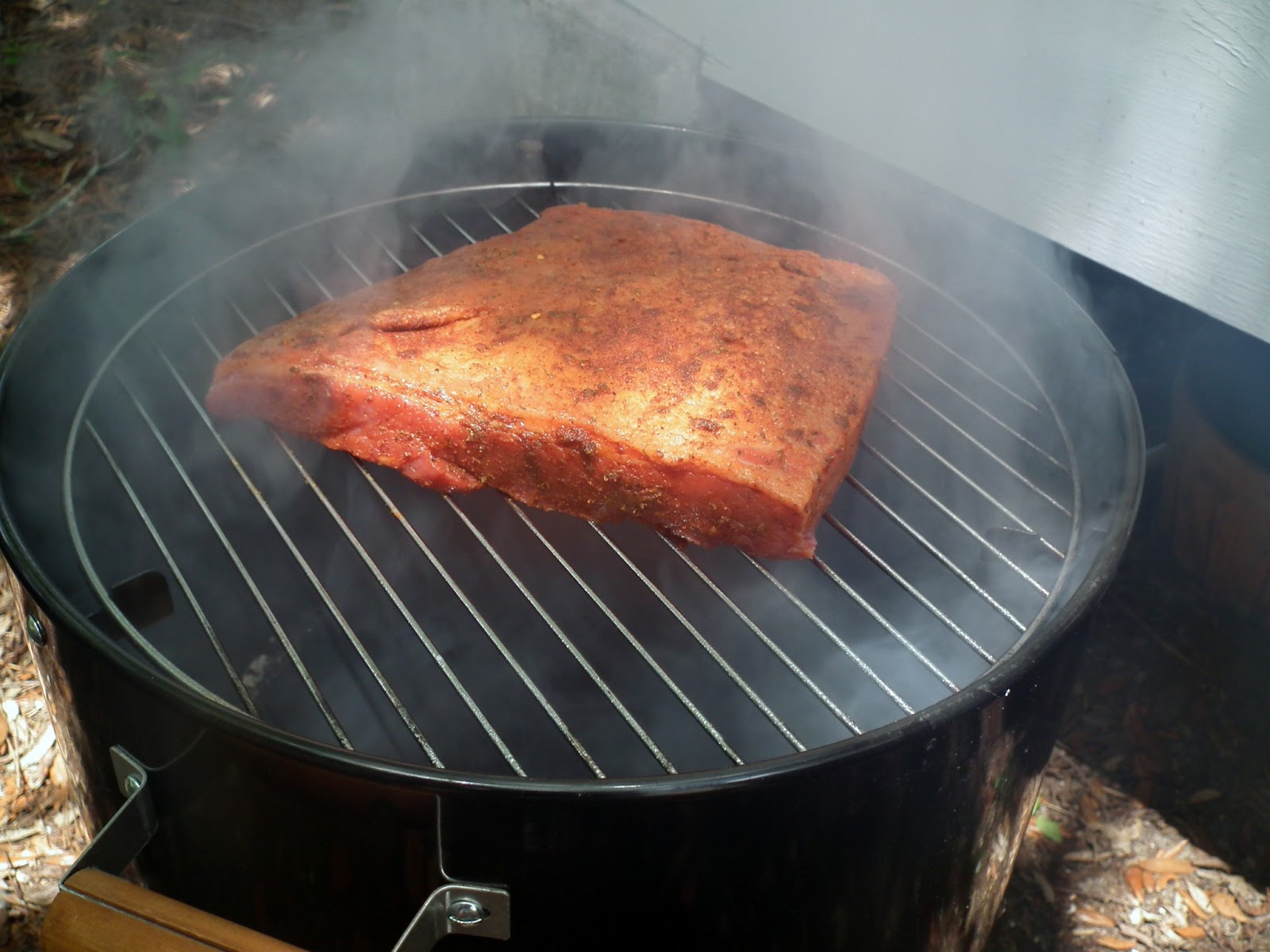 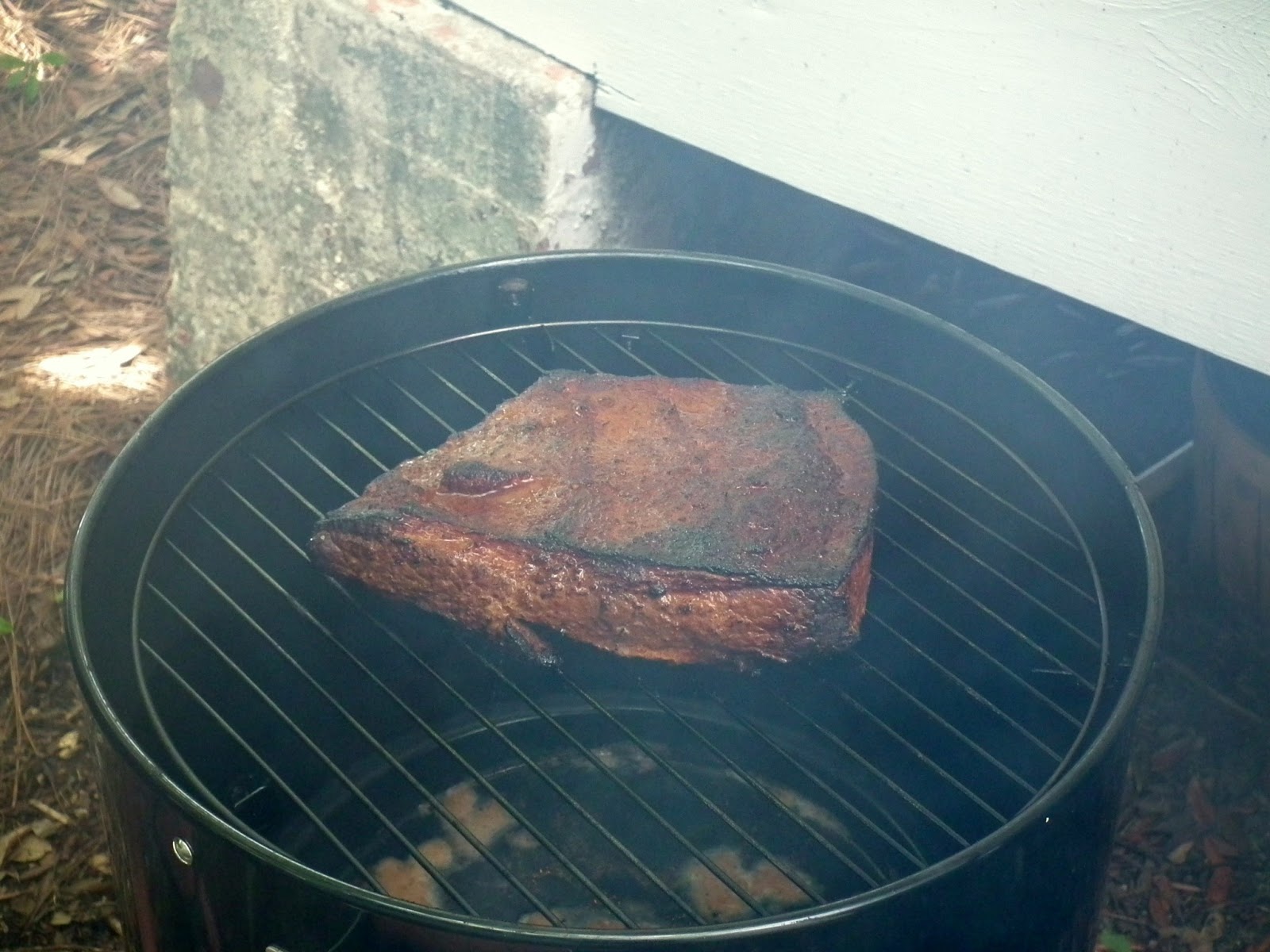 Now with good BBQ, the meat should be the hero (aka Michael Jordan), but a winning sauce is like your Scottie Pippen and Dennis Rodman; they provide some flavor and allow the star to shine.  If you've been following along, you'll know we're huge fans of Dinosaur Bar-B-Que.  They make the most amazing brisket I've ever had.  It just melts in your mouth!  So we turned to them for inspiration on the sauce, and found a recipe online for a variation on their wango tango sauce.  We started by mincing up the onion, peppers and garlic.  You could use a food processor to get tiny pieces, but I like chopping by hand.  In this step, we substituted an anaheim pepper for the green pepper, and we used 2 habaneros so as not to overpower the sauce with spice.  We also toasted up some mustard seeds before adding in the peppers and onions to saute. 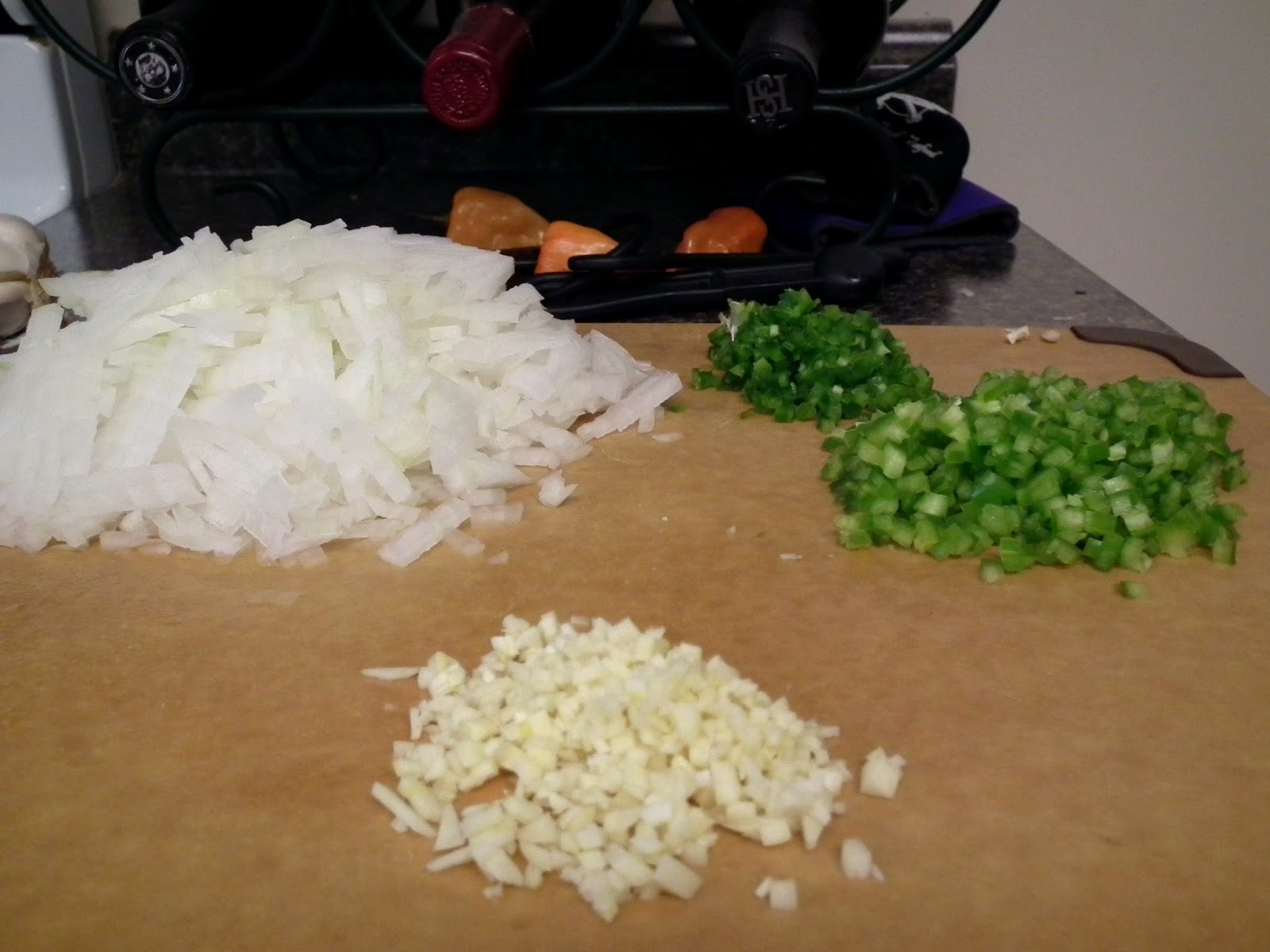 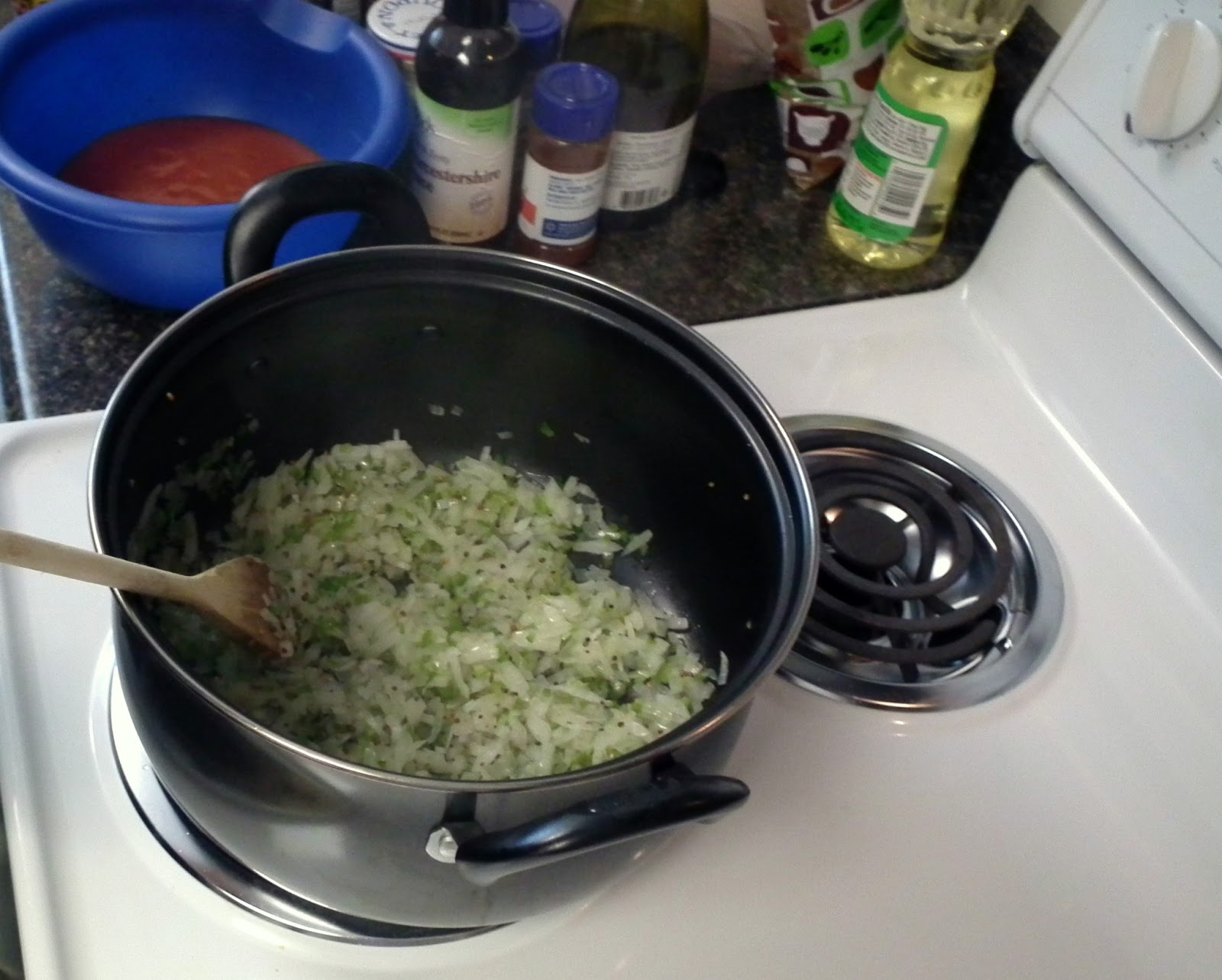 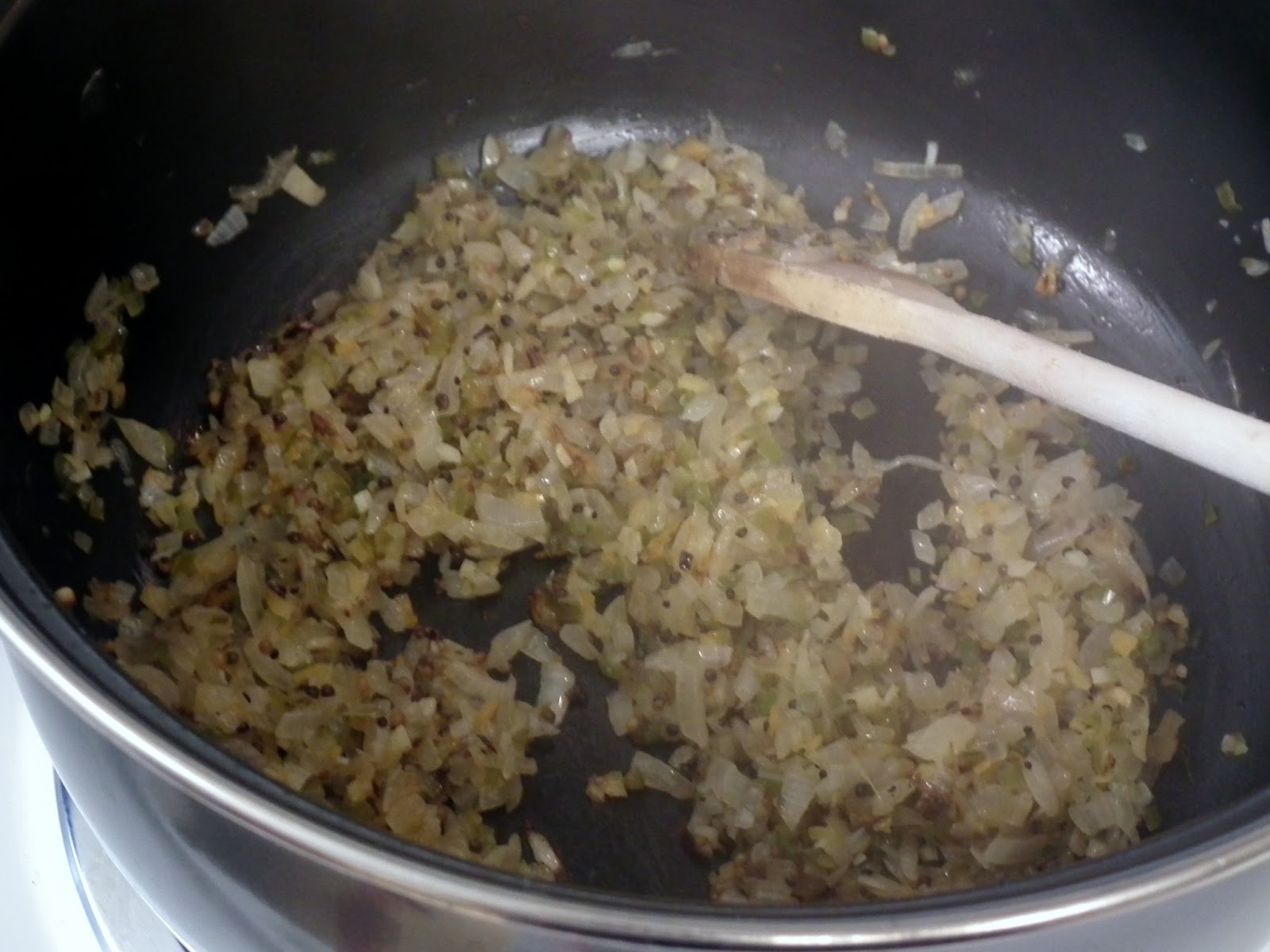 Once the peppers and onions had cooked for about 15 minutes, and really softened, we added in the garlic. While that's all cooking down, we mixed together the remaining ingredients.  We stuck pretty close to the recipe, but used slightly less ketchup, added a couple shots of bourbon, and a few tablespoons of our dry rub. 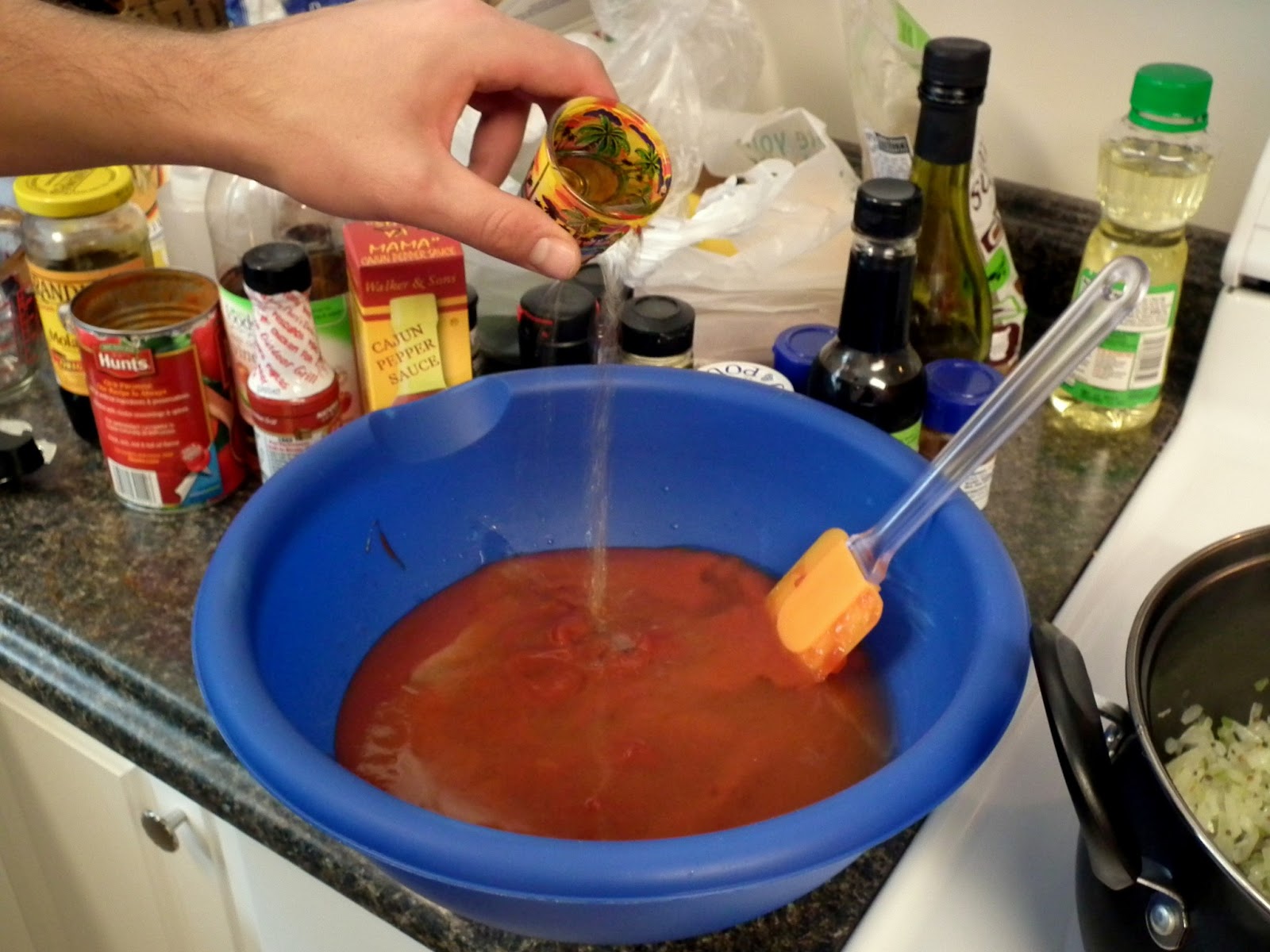 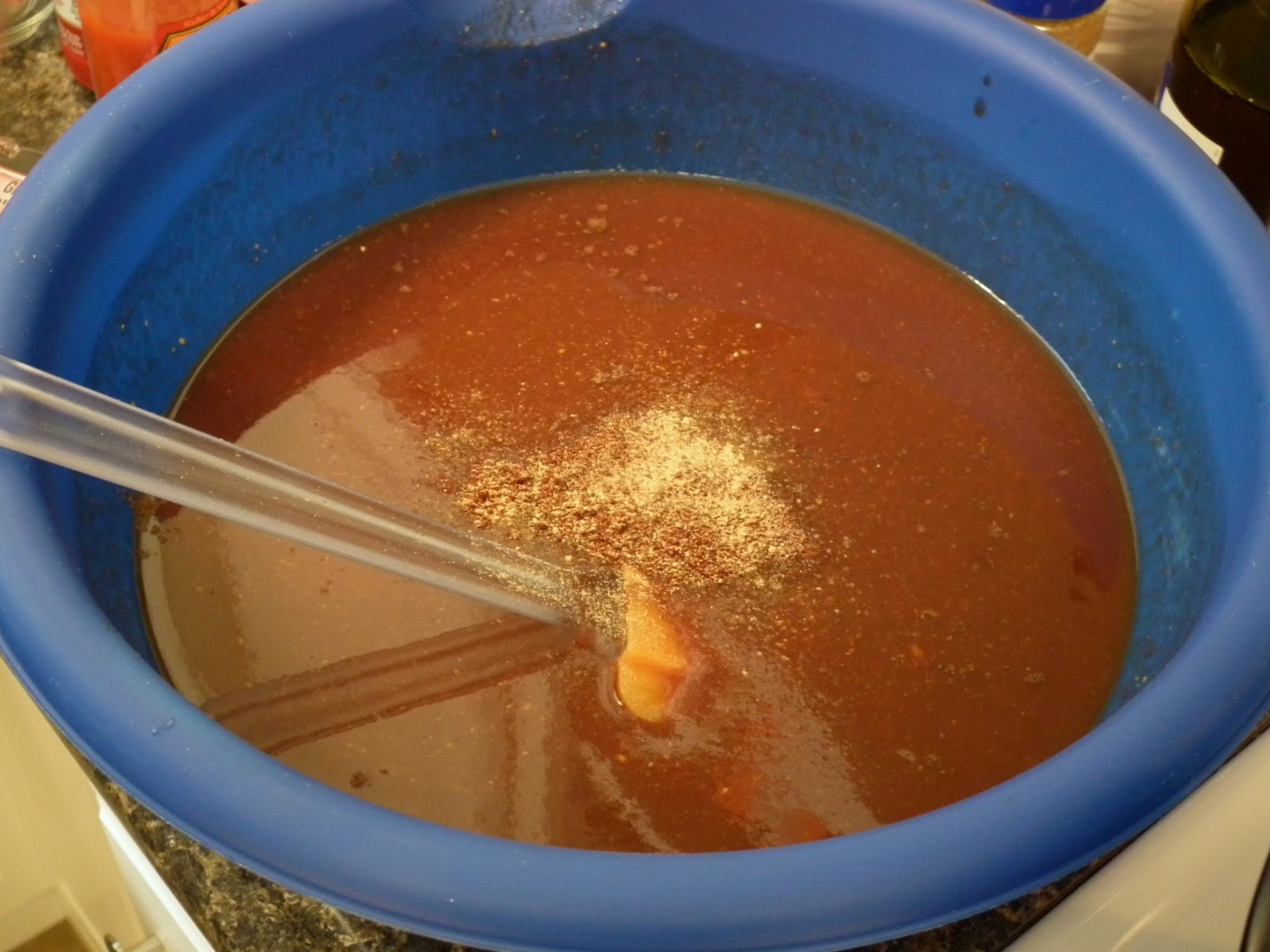 Just pour the wet ingredients into your onion/pepper/garlic mixture and let it simmer for about 15 minutes. Bring it to a boil, add in your liquid smoke, and let the sauce do its thing. The flavors really developed the longer the sauce simmered.  It has a nice heat and sweetness to it, without being overpowering. 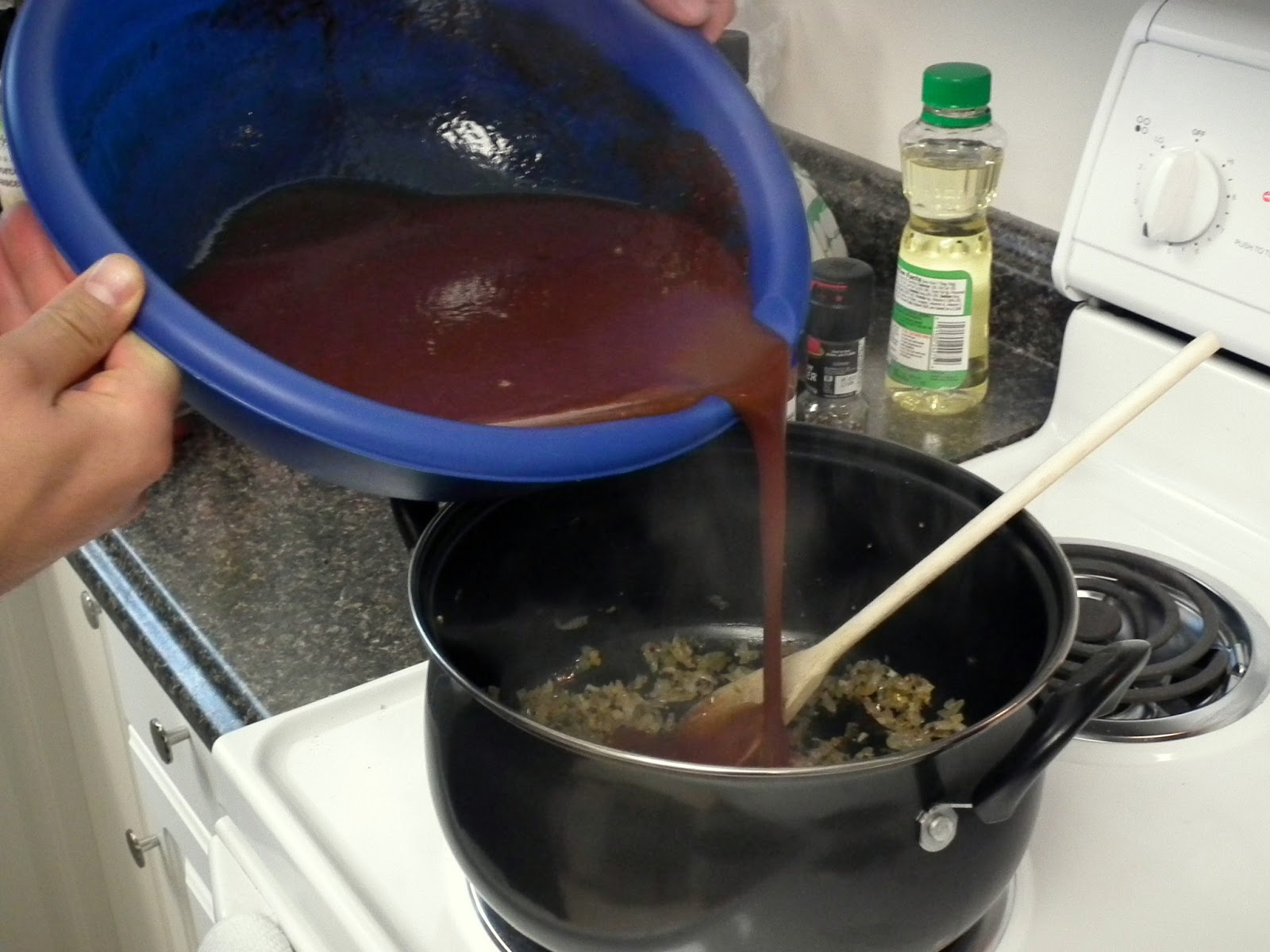 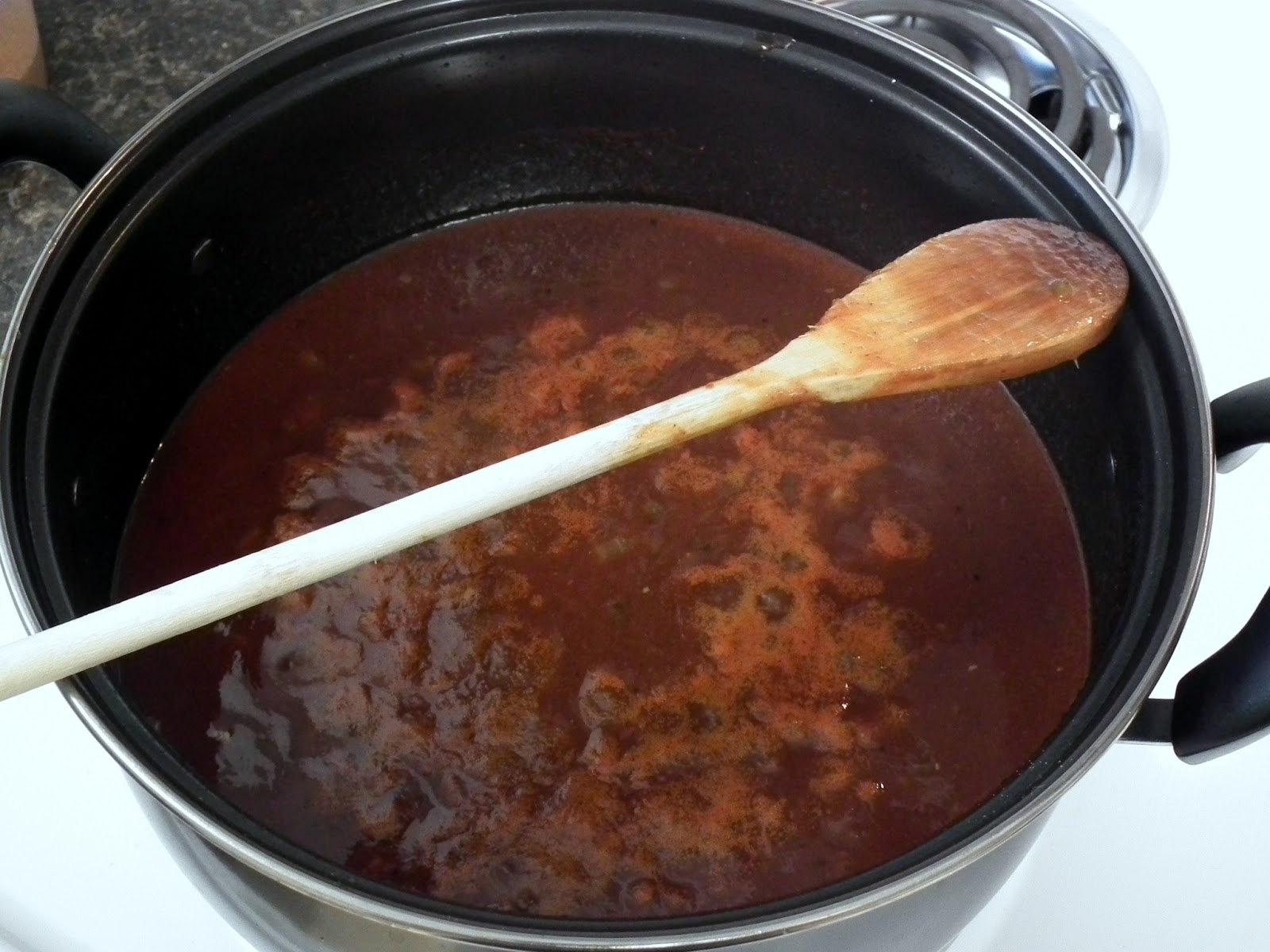 Now, for the hard part...the waiting! A general rule of thumb for smoking time is about 1.5 - 2 hours per pound of meat.  We had a nice 3 pound brisket so we had it cooking for about 5 and a half hours.  You'll often hear about people smoking meat for 18 hours, and there is much debate in the BBQ community about this, but they use hunks of meat the size of a chevy suburban.  The important part is to get a nice piece of meat with a uniform fat cap on it.  If your smoker has a thermometer, try to keep your temperature at about 220-250 degrees.  You'll know it's done when the meat is firm and has a nice smoky crust on it.  Then just let it rest for at least 5 minutes, and slice it up. 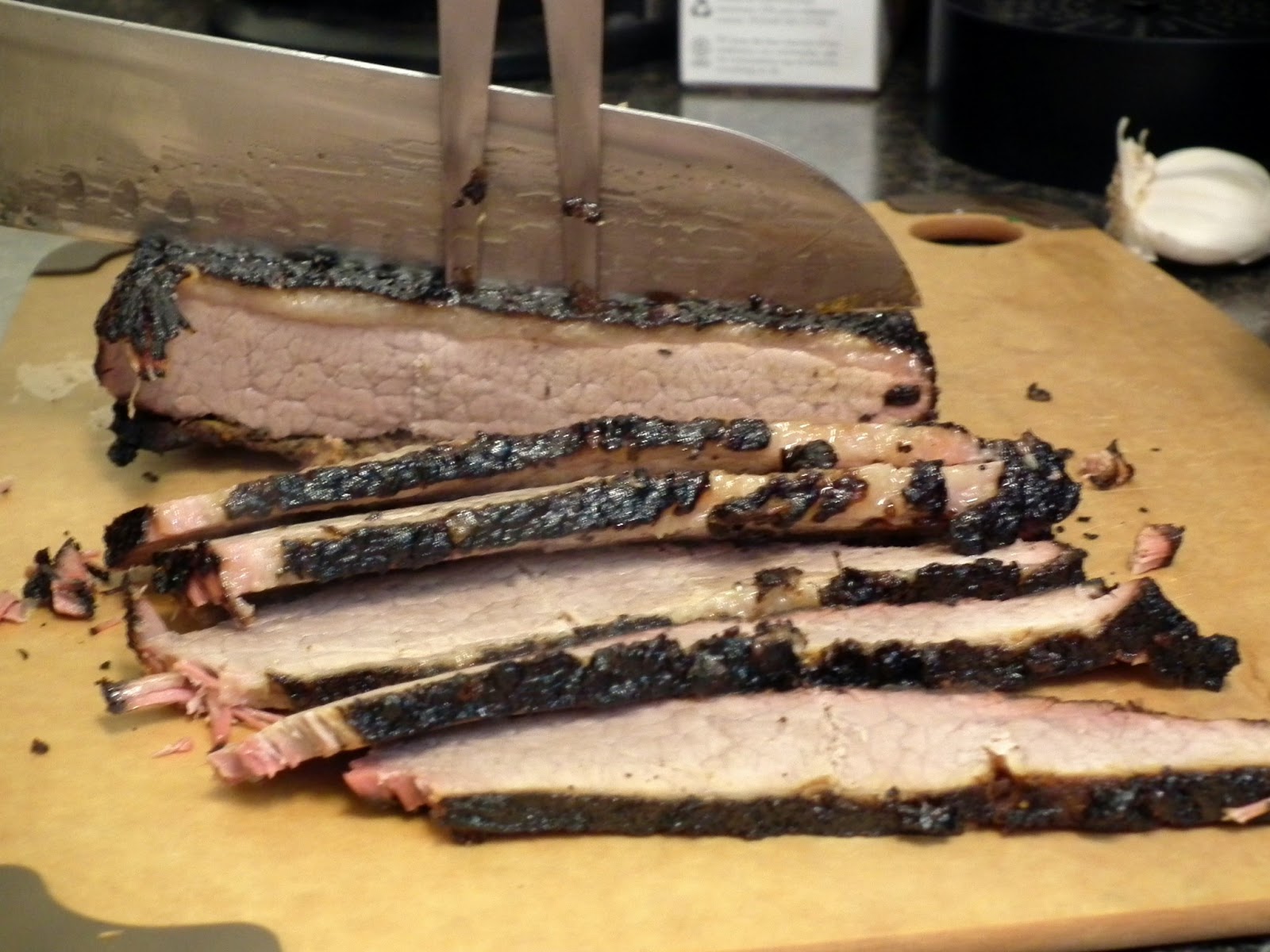 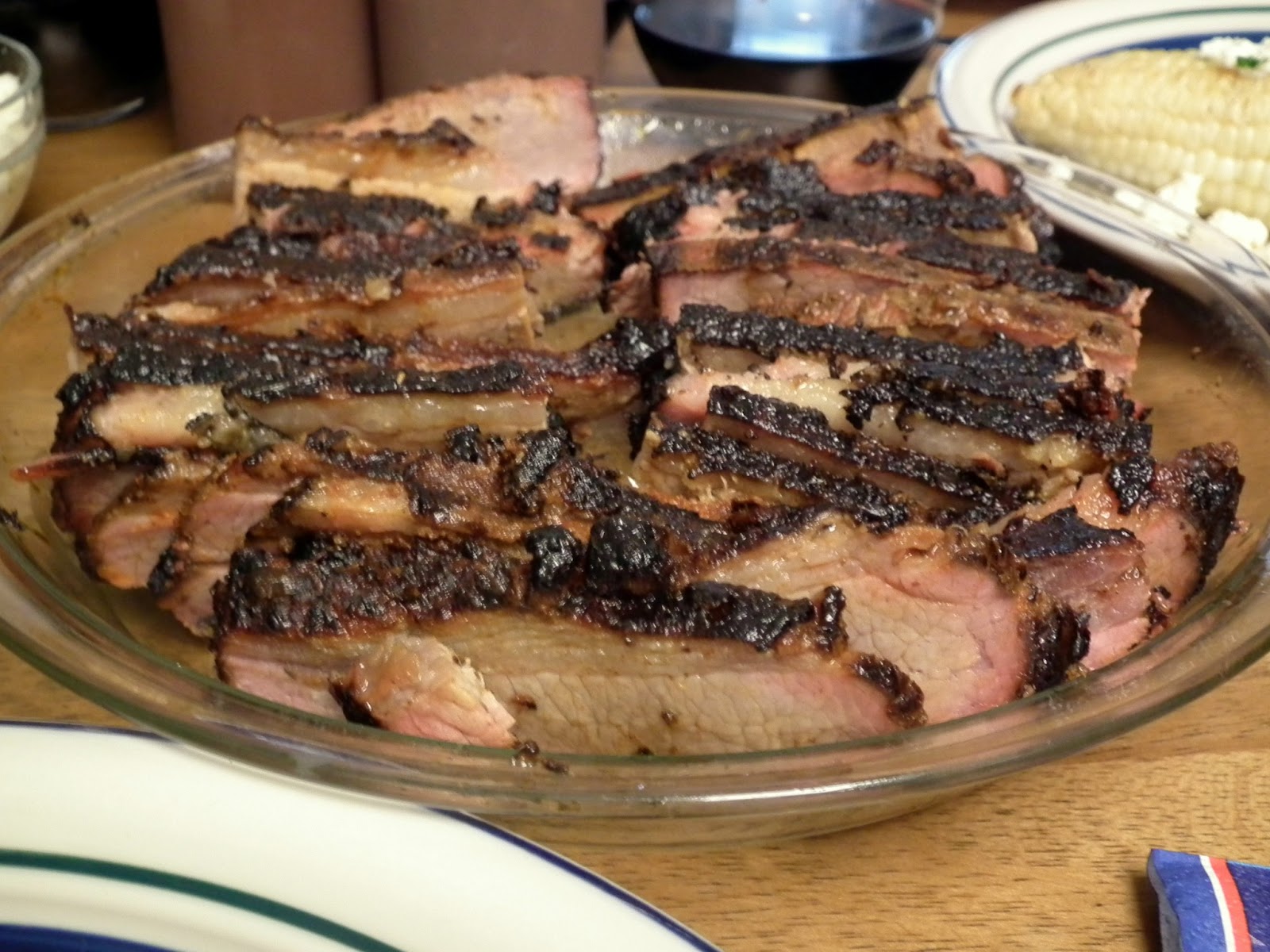 Then toast up some buns and start piling on the meat!  For sauce, we used some of our wango tango-inspired sauce, and also mixed some in to our vinegar basting liquid to have a vinegar-based sauce as well, to keep things NC-style.  To round out the meal, we baked up some sweet potato fries, grilled up some asparagus and corn, and make some jicama slaw.  We'll be back later this week with details on the slaw and corn. 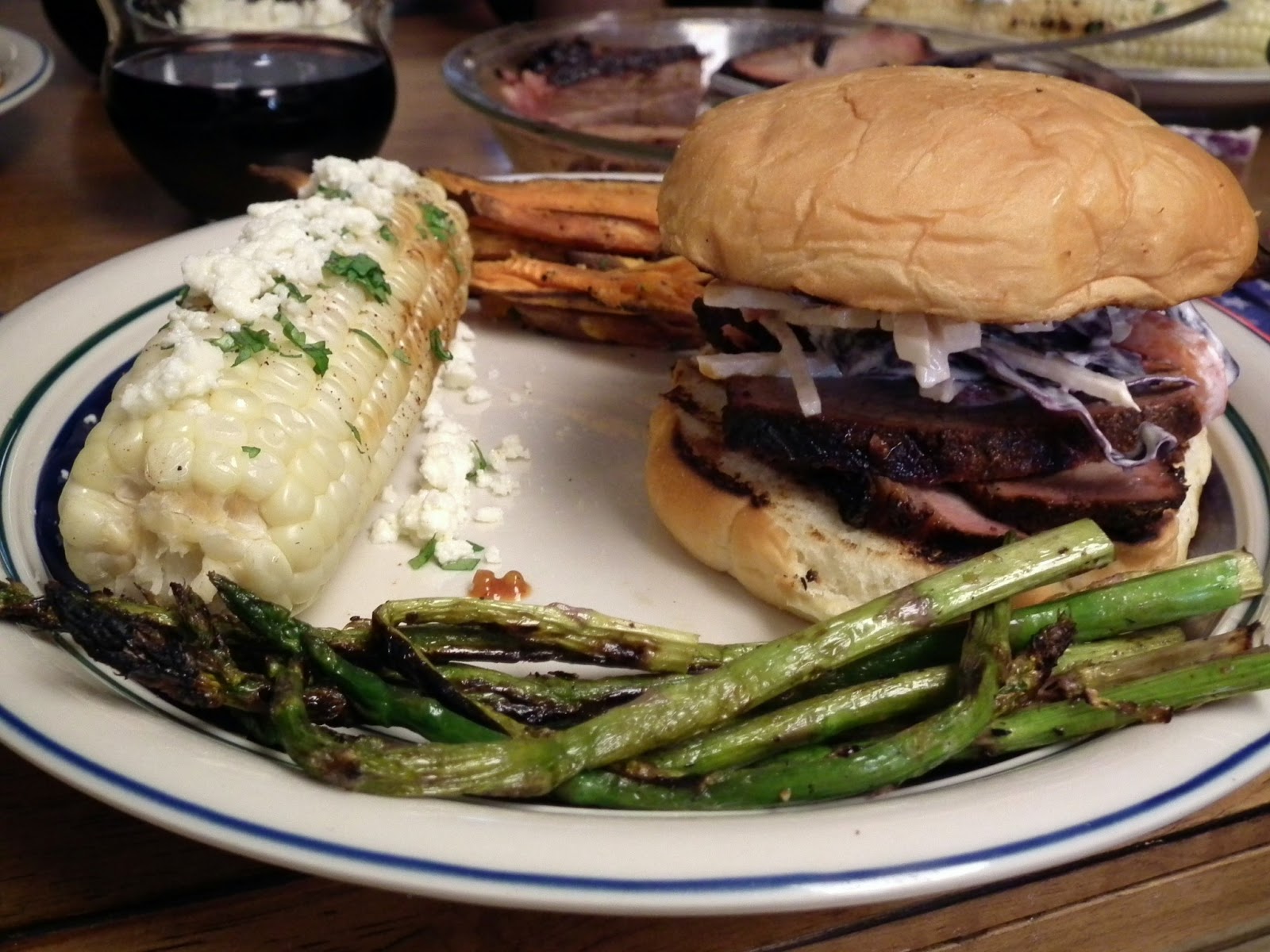