Yes, Soup for Us!

Winter is always a great time to cozy up with a warm bowl of soup, and tonight was no exception.  We put together a tasty butternut squash soup, and it couldn't have been easier.

We halved our squashes and threw them into the oven to roast.  While those were cooking up, we put together a proper mirepoix...onion, carrots, and celery, all sauteed in some butter.  We also threw in a little thyme and some sage. 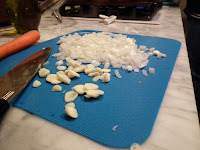 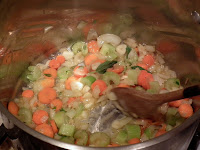 Once the squash was roasted, we let it cool a bit before scooping out the meat of the squash.  Into the pot it went to mix and mingle with the mirepoix. 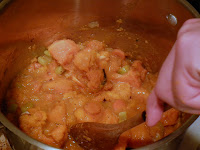 We also threw in some cream and chicken broth and just let it simmer.  Because we didn't have any meat in this meal, we decided to cook up a few strips of bacon to crumble over the soup. 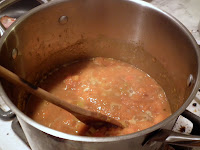 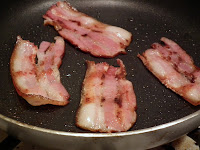 While the bacon crisped up, and the soup came together, I put together a nice little salad.  We spooned some goat cheese into a couple radicchio leaves, and put them into the oven, along with some mushrooms, to top off the salad. 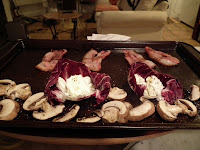 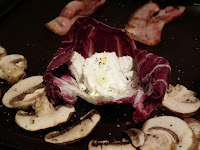 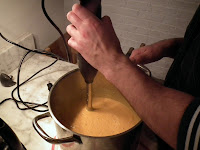 By the time the mushrooms and cheese were done, it was time to puree the soup.  I'm pretty sure I've said this before, but my immersion blender is one of the best kitchen tools.  It easily pureed everything together, and gave us a rich, thick soup.


The salads were topped with the mushrooms, radicchio, and goat cheese, and dressed lightly with some olive oil and balsamic vinegar.  The soup got a light drizzle of truffle oil, and cream, a sprinkling of parsley, and a nice little pile of bacon.  This soup was even better than a certain mulligatawny.  Despite the minimal amount of meat in tonight's dinner, it was still a filling meal that definitely warmed me up! 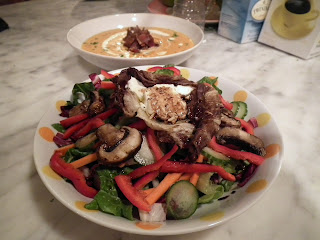 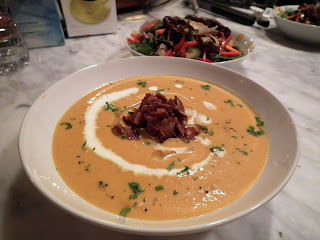