Gimme Back That Filet o Fish

Since the meats we got in Tuesday's share were all frozen, we made a quick stop in Eastern Market to pick up a protein to go with some of our fresh veggies.  We decided to go with some nice salmon filets, atop a parsnip and turnip puree, with a side of red kale.  Luckily the salmon was not as annoying as this fishy.

So let's get cookin'!  The puree took the most work, so I got to peeling the parsnips and turnips, while Justin chopped them.  After a little salt and pepper, those went into the oven to roast. 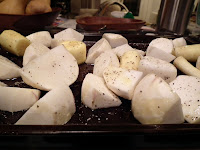 While the parsnips and turnips were roasting, Justin made the brown butter.  If you haven't made it before, its a very simple technique that adds a great nuttiness to your food.  You just melt some butter in a pan and let it caramelize until it turns brown and tastes nutty. 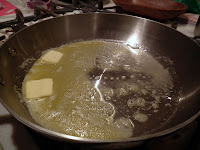 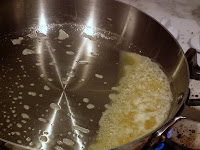 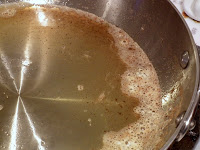 As soon as the butter browned, we added some black mission figs cut side down, and half of a red onion, and let them cook down and get coated in the delicious butter.  Once the turnips and parsnips were roasted, those were added to the brown butter, figs, and onion.  We kept it all in the pan for just a few minutes, to allow everything to be coated in the butter, and let the flavors kind of meld together. 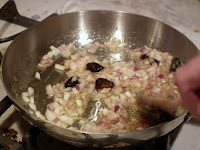 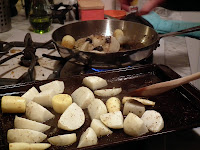 Then it was time to puree!  If you don't have an immersion blender, you should really consider getting one.  We've used it to make sauces, soups, purees, smoothies and shakes.  Its such a versatile tool and it doesn't take up a lot of space.  Anyway...back to the puree... 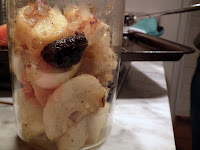 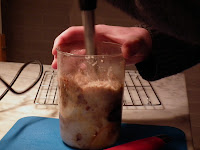 The only other thing we added to the puree was some flat leaf parsley and a touch of heavy cream.  The figs added a nice sweetness, but the tang from the turnips still came through.

While the puree rested, we got to the rest of the meal.  Justin seasoned the salmon with some smoked applewood sea salt, lemon salt, a touch of cayenne, some brown sugar, and some fresh dill and thyme.  We popped those into the oven for about 12 minutes, and they came out perfectly cooked. 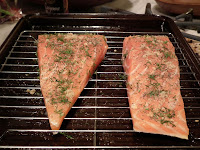 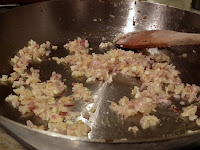 While Justin took care of the fish, I got to work on the red kale.  Using the same pan that we browned the butter in, I sauteed a shallot and some garlic.  Then I tossed in the kale and let it wilt down a bit.  I noticed the shallot and garlic were starting to stick to the bottom of the pan a bit, so I deglazed the pan with a little lemon juice and red wine vinegar to give it a little tang, and to pick up all the buttery bits at the bottom of the pan. 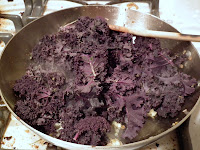 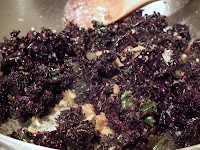 By the time the kale had wilted, the salmon was ready.  We're getting a lot better at this whole timing thing!  Everything came together wonderfully!  The salmon had a nice sweet, smokey, herby taste, while the puree was sweet with a hint of tang, and the kale gave us some crunch. 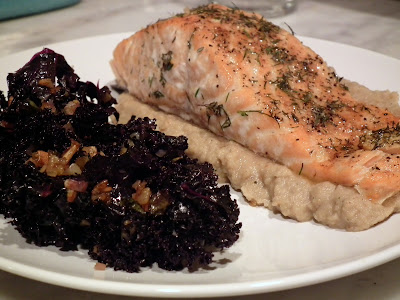