Today's Forecast: Chili with a chance of deliciousness!

With the impending inauguration tomorrow, we're hunkering down at home, avoiding the crowd and all the out of town escalefters (for those not familiar, an escalefter is someone that stands on the left side of the escalator, preventing you from walking up/down the escalator).

So with a Sunday night of football, what better meal to make than chili?  Plus, it means I get to try out my new crock pot that Justin gave me for Christmas.  Oddly enough, this is my first go-round with a crock pot.

We started with half a package of ground turkey (the other half from when we made burgers), and some ground beef.  We also threw in a chopped white onion and let it all cook up.  For spices, we tossed in cumin, cayenne, and chili powder. 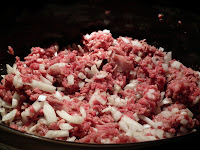 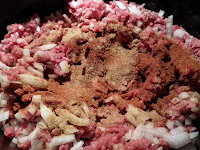 While that was browning, we threw some tomatillos, a huge clove of elephant garlic, an Anaheim chili, a poblano chili, and a habanero into the oven to roast.  The oven was set at 350, and it only took about 20min for everything to get roasty, toasty and charred.

Once they were cool enough to handle, I chopped them up so they could be added to the pot.  We also drained and rinsed a can of kidney beans, cannellini beans, and corn. 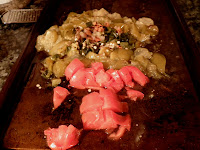 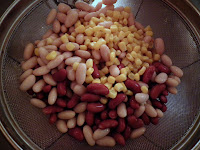 After the meat browned, we added the roasted peppers, tomatillos and garlic, and the beans and corn.  There wasn't as much liquid to our liking, so we threw in a can of whole tomatoes.  With a good toss, so everything got coated in the spices and juices, and a sprinkle of red pepper flakes, we put the lid back on and let it simmer so all the flavors could meld together. 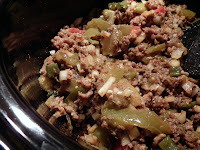 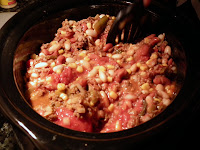 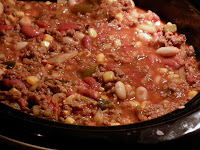 While the chili was simmering, we threw together some honey hush cornbread, ala Dinosaur Bar-B-Que.  I know I've said it once before, but I'm going to say it again...if you find yourself in Harlem, Syracuse, or Rochester, NY, you MUST find your way to Dinosaur Bar-B-Que.  They have the best, melt-in-your-mouth brisket you could ever imagine!

Anyway...the cornbread.  We just followed the recipe I linked to above...mixed up all the ingredients, popped her in the oven and let her bake up. 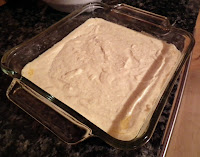 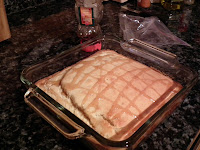 The chili was topped with some shredded cheddar, a dollop of cilantro lime crema, and some freshly chopped cilantro. 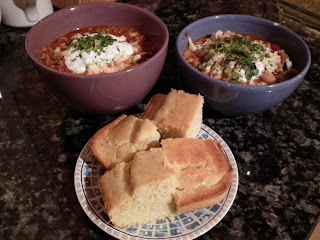