Ahh Sundays...since my Pittsburgh Steelers failed to make it to the post-season, I have even more time on my hands where I can either mope around that I have to get up early the next day or make something delicious to eat.

Today Kara and I were looking to use up few items from our last share.  Originally we were hoping to grill our steak since the weathermen promised us a sunny and 70 degree day, but yet again we were led astray by a weather forecast fail; so that was out of the question.  Instead, we decided to work around this by sous-viding our buffalo strip steak. We're not fortunate enough to own an immersion circulator, so we simply threw our vacuum-packed steak into a dutch oven filled with water heated to about 130 degrees for about 40 mins.  Once it was cooked through to a nice medium, I removed it, seasoned it with a little roasted garlic salt and black pepper, and seared it in a grill pan for about two minutes a side. 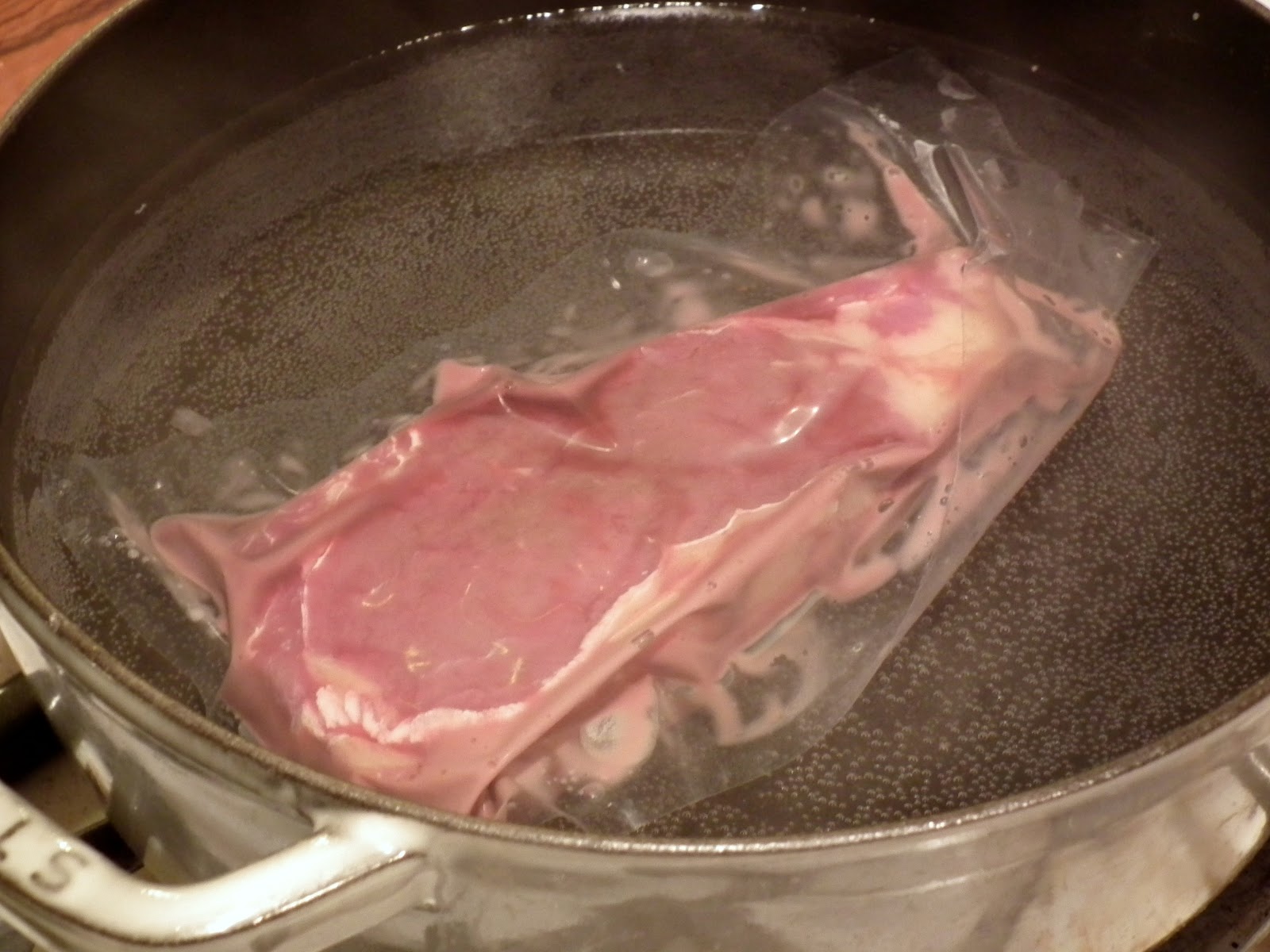 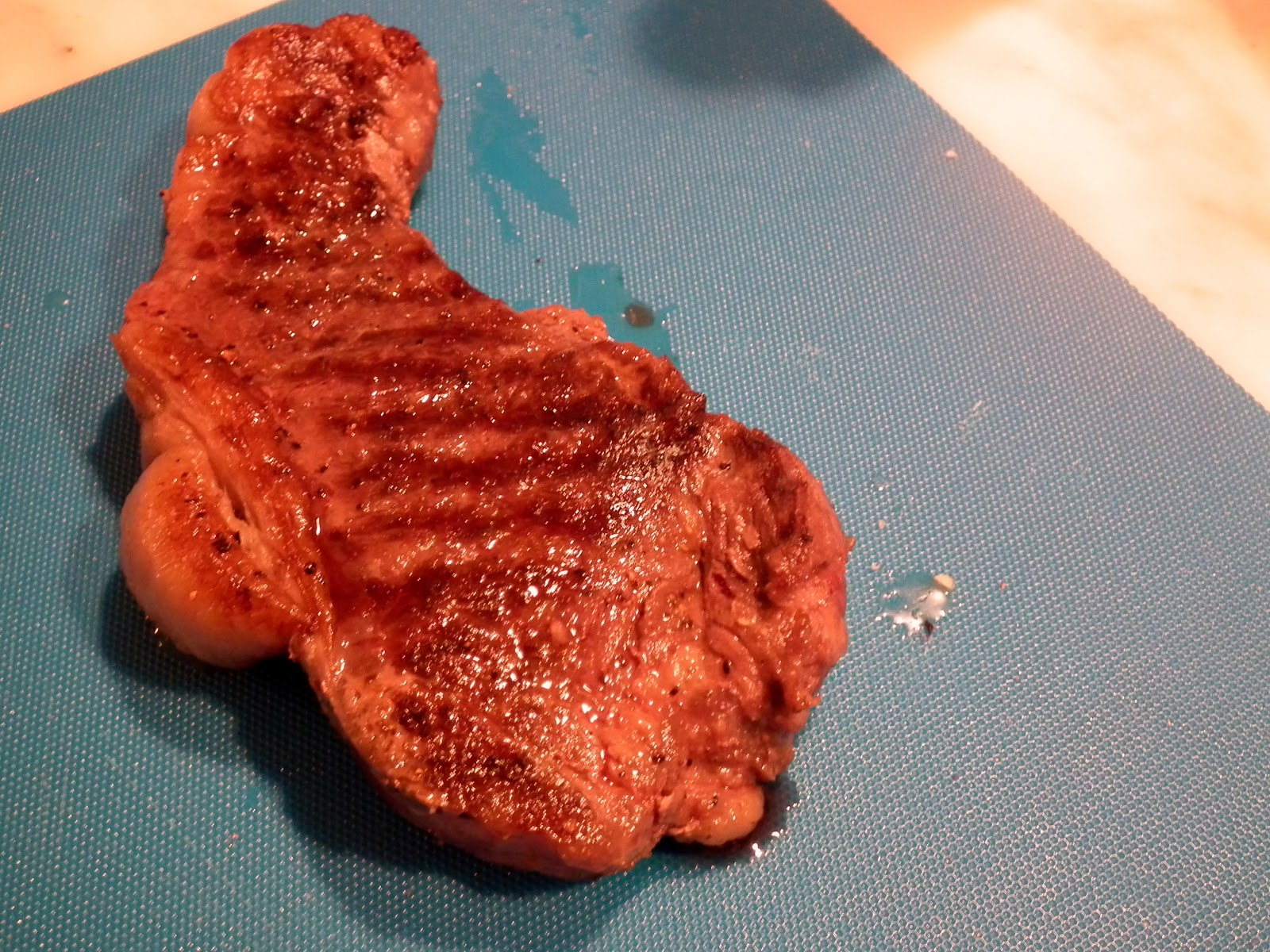 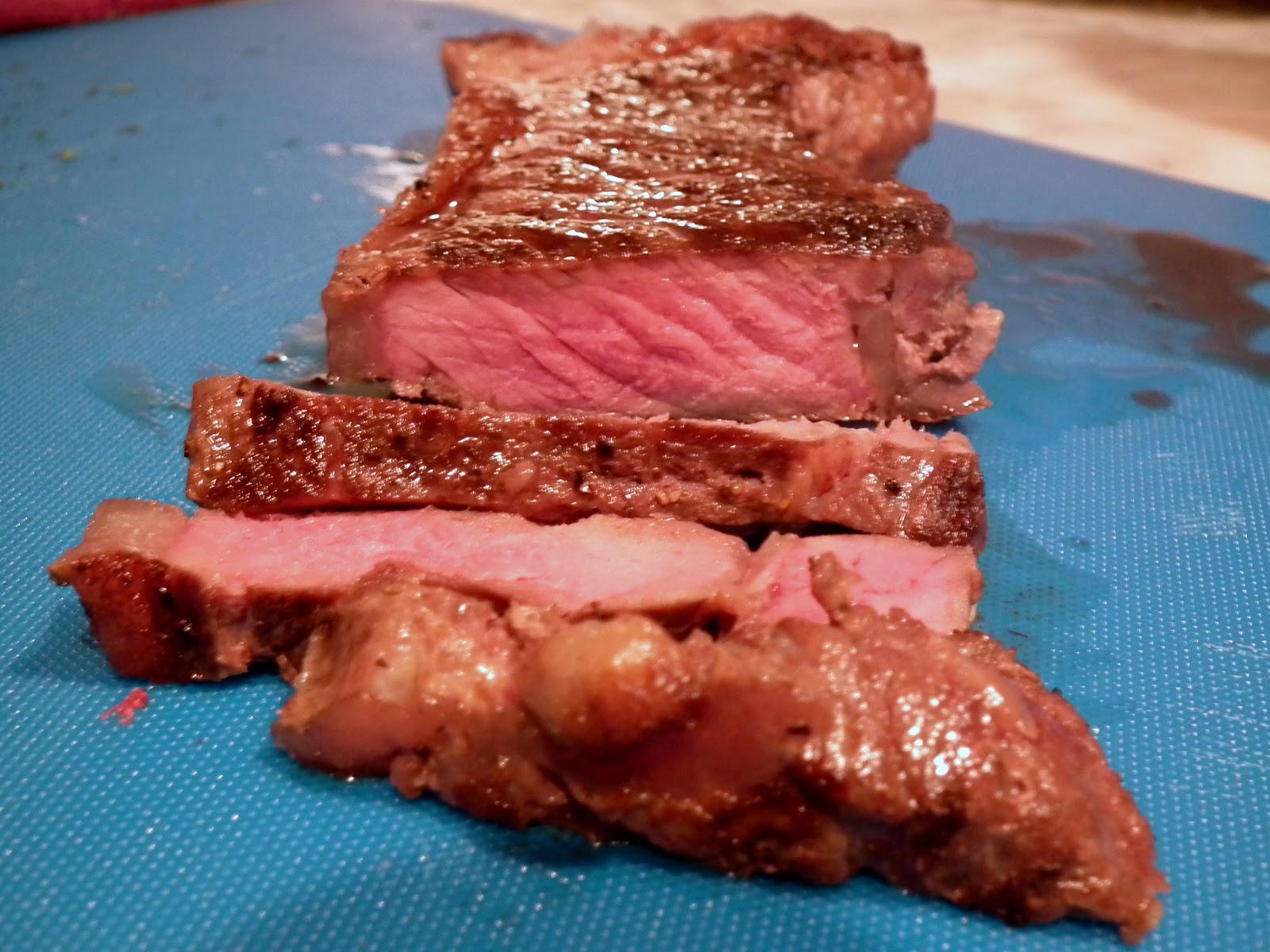 Next up was the kohlrabi.  We were simultaneously thinking "awesome" and "WTF?!?!" when we learned we were getting kohlrabi this week. 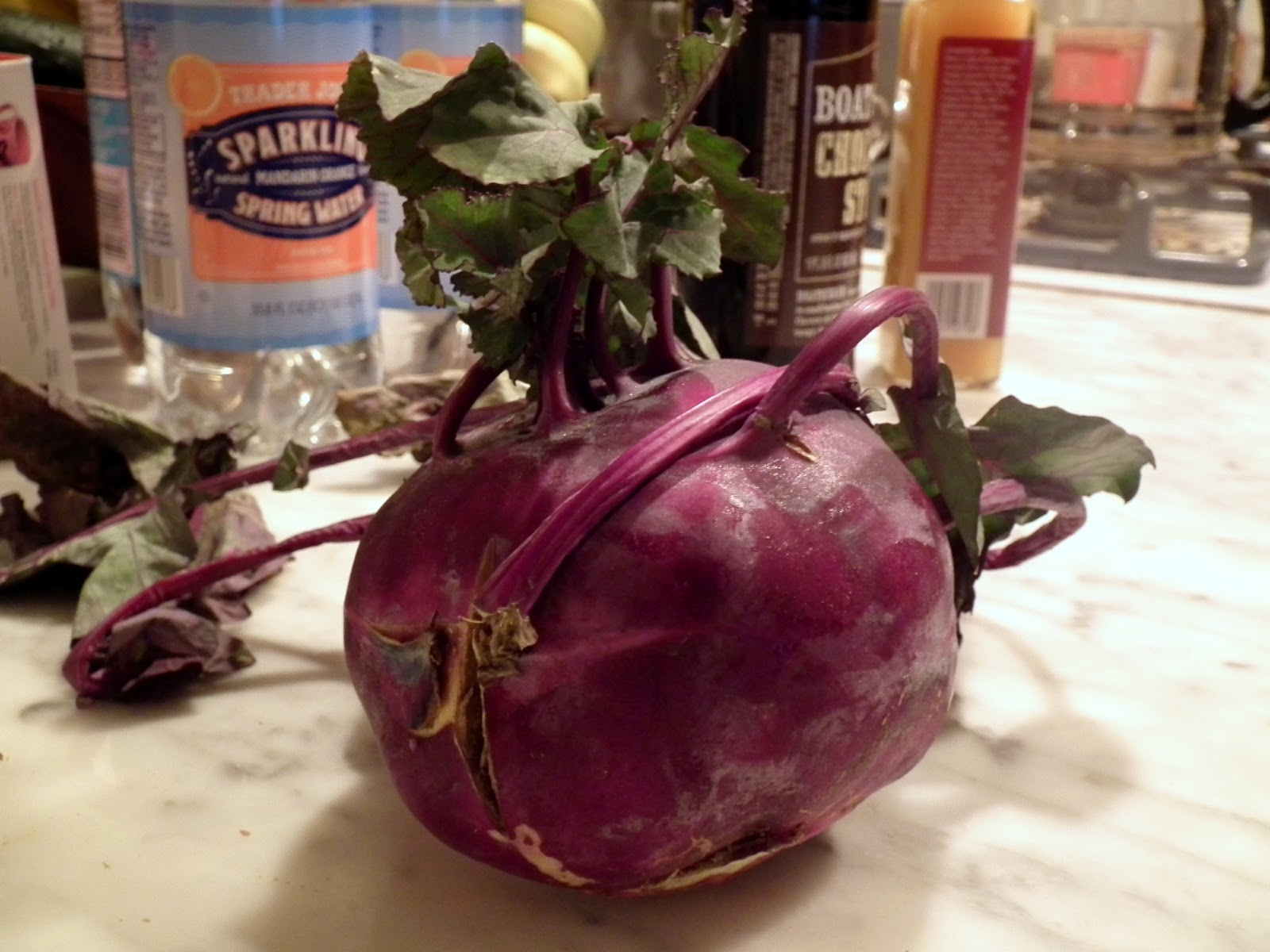 A brief search through the interwebs led us to this fritter recipe .  We subbed the besan for good old-fashioned flour.  One tip when squeezing out the excess water from the shredded kohlrabi...place it all in a dish towel, and just wring it out.  You'll be able to squeeze a lot of water out without losing any kohlrabi down the drain.


The fritters were pretty easy to put together...shred the kohlrabi, chop up some scallions, mix in the spices, and you're good to go! 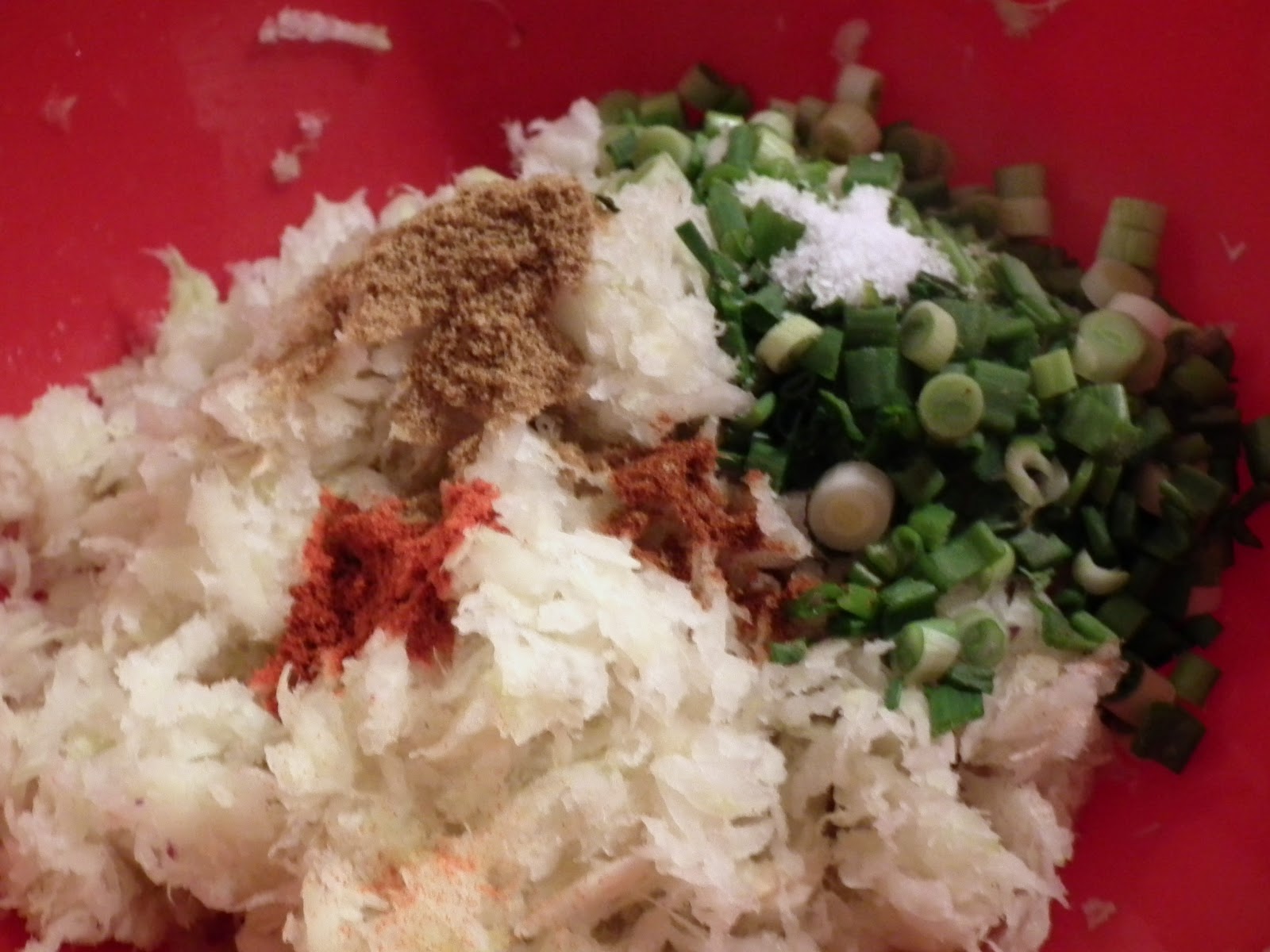 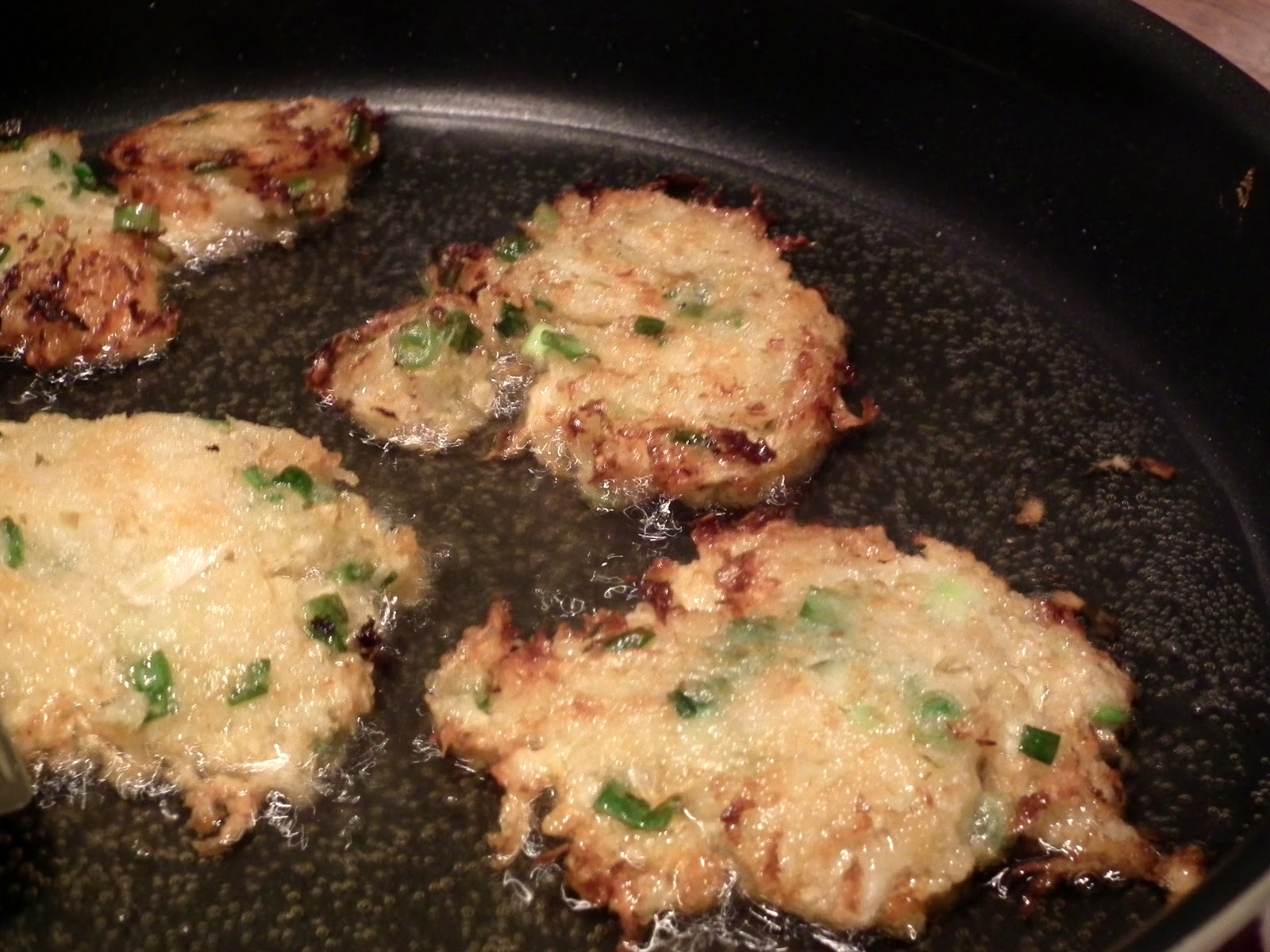 What about those greens? Why we sauteed them with some garlic, shallot, and the rest of our spinach. 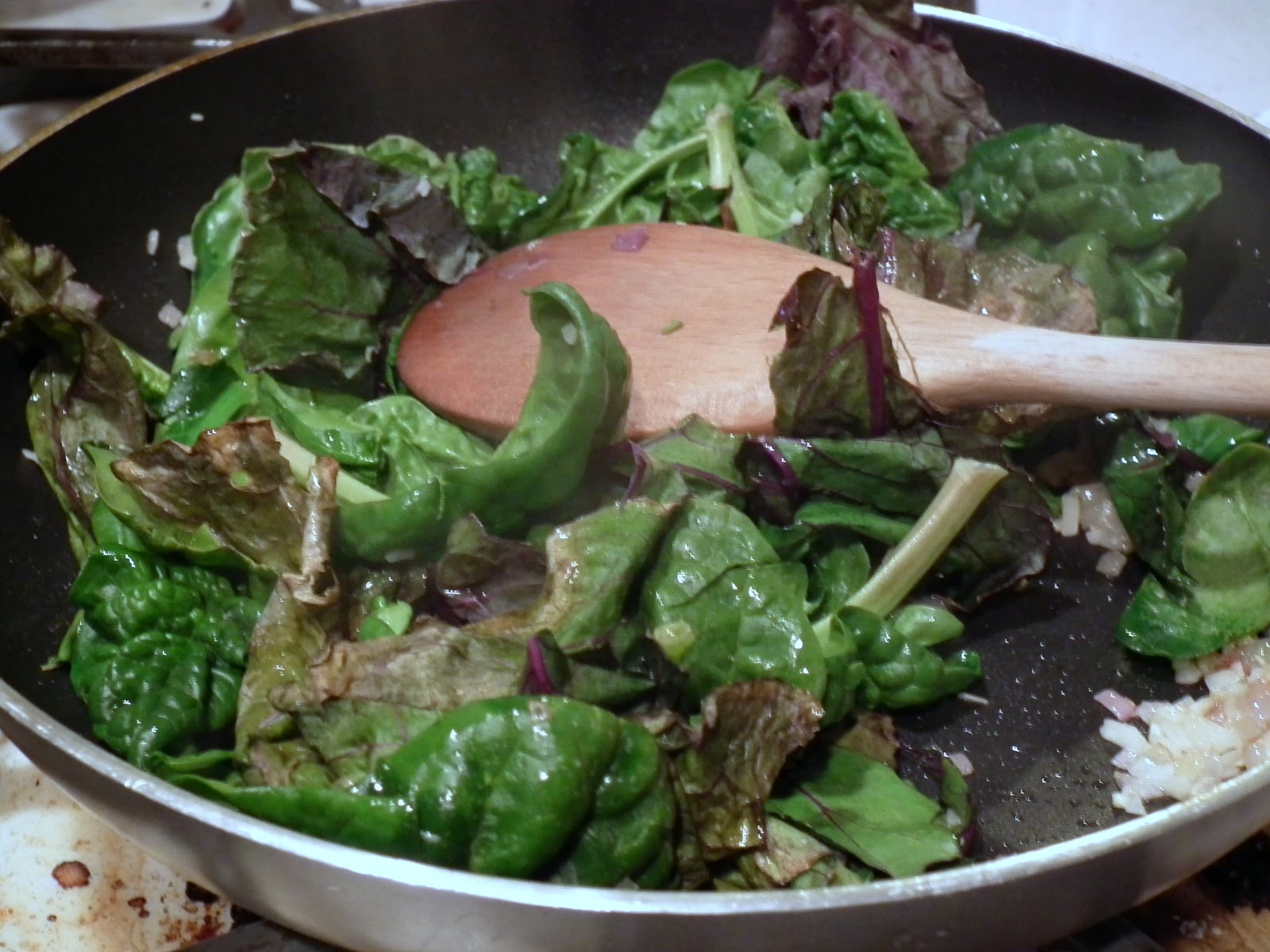 The meal was really starting to take shape, but rich steak and starchy pan-fried fritters needed to be paired with a fresh component.  Luckily, we had lettuce from our CSA and decided to throw together a little salad.  During a quick jaunt to Trader Joe's, we picked up some mini portabella caps, which we roasted with some goat cheese, and some orange muscat vinegar to round out the salad...plus some decent $2 beer to boot. 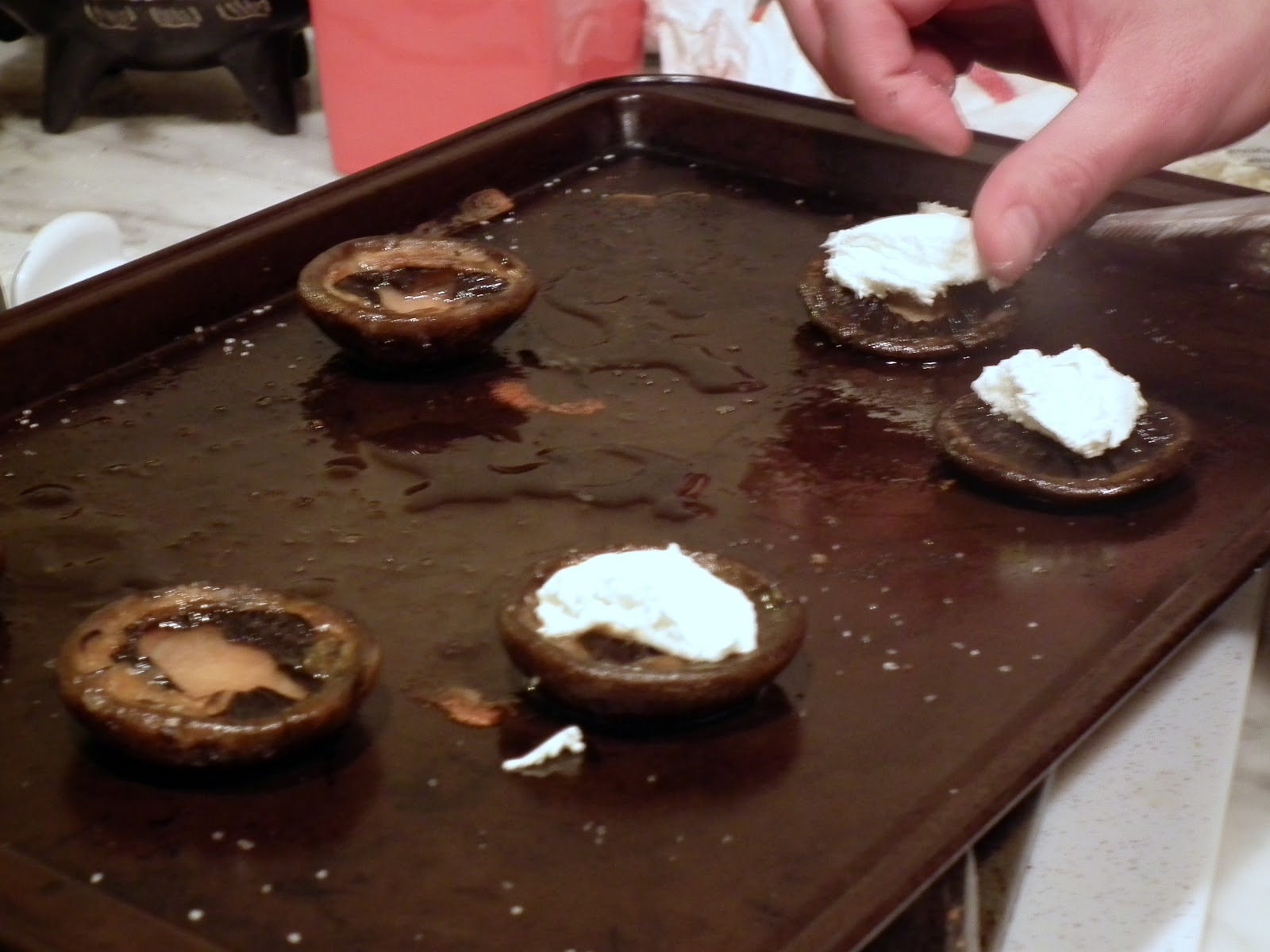 We were only missing one thing...a tasty sauce to compliment our greens and meat.  I'm a huge fan of red meat and Bearnaise sauce, and I like putting my own spin on this classic sauce by subbing the tarragon for other herbs, deglazing with liqueurs etc.  Since we had the dill, I simply used it in place of the tarragon. 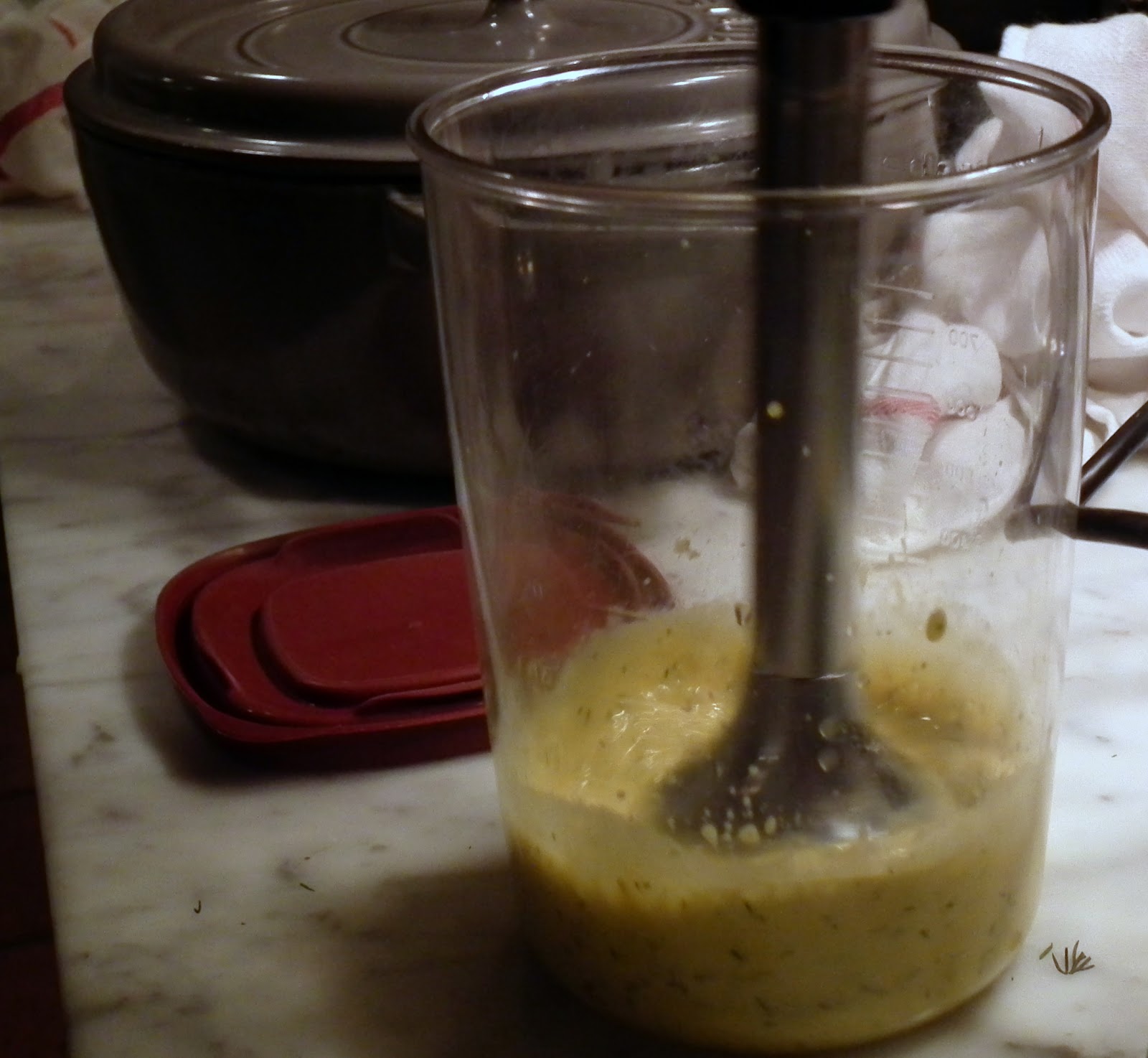 It all came together quite nicely, and we truly made the best of an otherwise dreary day by relaxing with some quality food and drink. 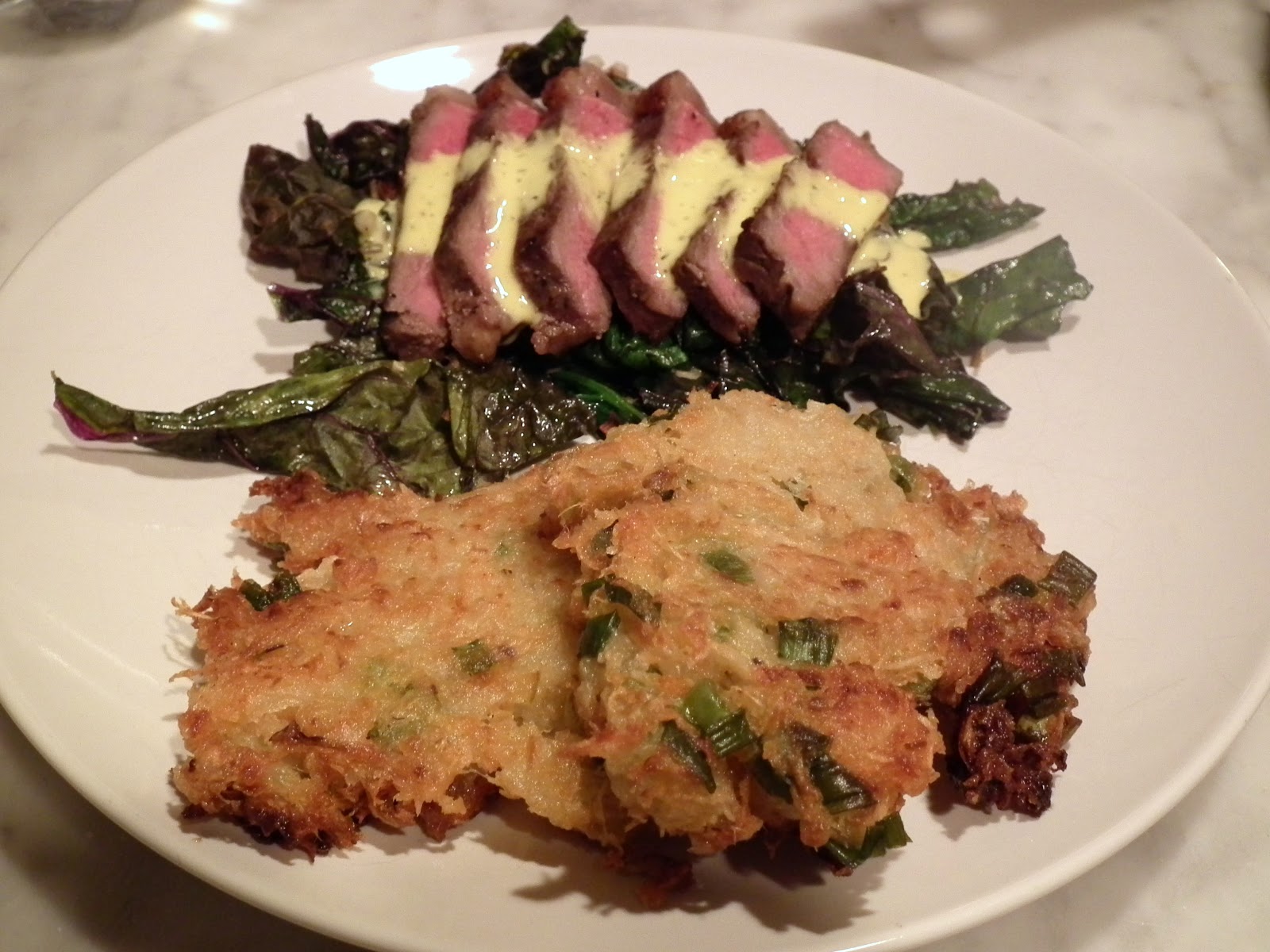 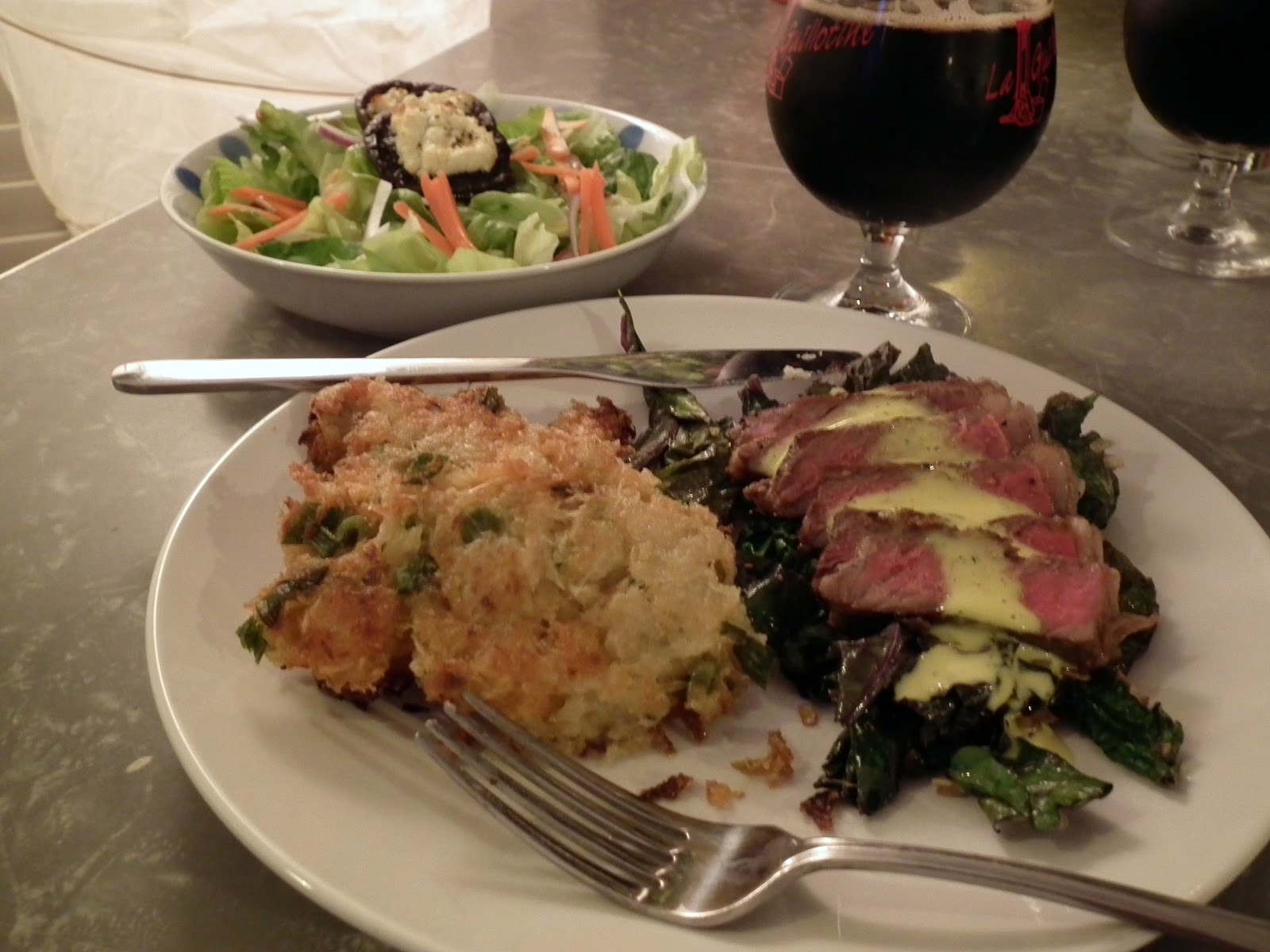