When I first really got into cooking, I was (and still am) a fan of Rachael Ray.  Her recipes were easy and used common, everyday ingredients, and she made cooking look fun and easy.  And it turns out Justin had a bit of a crush on her too (which I can kinda see, she rescues pitbulls, can cook, and has delightful catchphrases such as "yum-o").  Anyway...one of the few recipes of hers that I still make are her spanikopita burgers.  The spinach and onions keep the turkey juicy, and the feta gives the burger a nice saltiness.  To kick up the Greekyness, I like to top them with homemade tzatziki.

Start by chopping up some red onion and garlic and get that sauteing in a pan.  Once they become really fragrant, and the onions are translucent, set them aside to cool.

For the spinach component, I take the easy route and just use frozen chopped spinach.  Once its defrosted, you'll want to wring out all the water so your burgers don't become soggy.  Just like I did with the kohlrabi the other night, you'll want to put the spinach into a dish towel, and just wring it out. 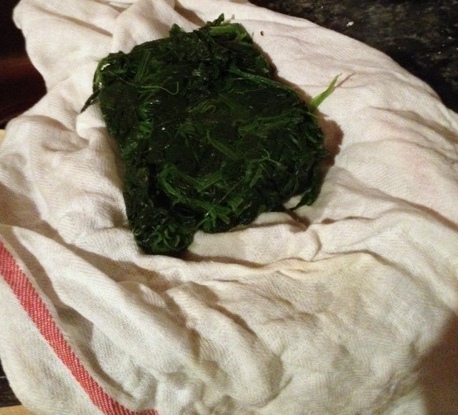 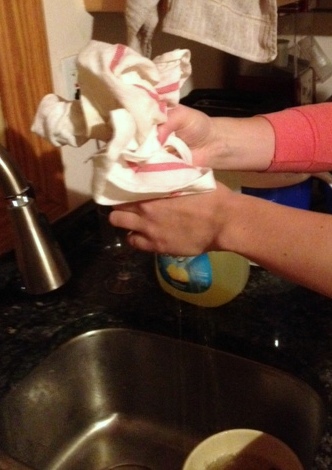 You'll be surprised by how much water comes out of the spinach.  To quote Justin, "The spinach is peeing!"  Yes, we're like 5 year olds sometimes :)

Once you've gotten as much water out of the spinach as you can, toss it in the bowl with your ground turkey.  Then you add in some feta crumbles, and the spices.  This time we went with salt, pepper, oregano, parsley, a little rosemary, and some dill.  Now its time to get down and dirty and mix everything together so all the ingredients are evenly distributed.  Then you're ready to make your patties and cook 'em up! 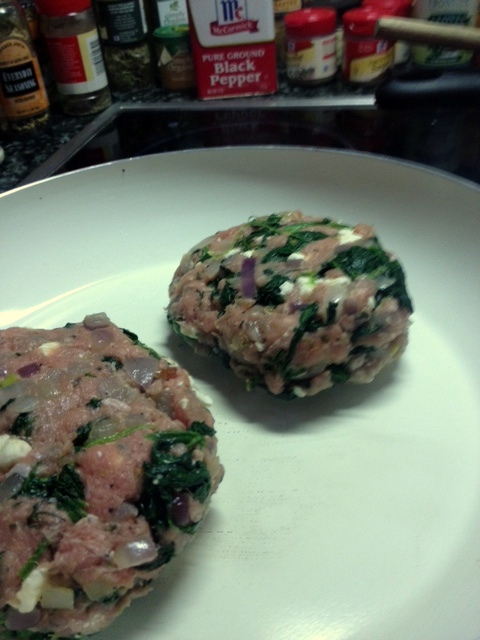 While the burgers were cooking, we made the tzatziki.  I like to grate the cucumber so its easier to get the water out of it, but Justin took the time to slice it really thin.  If you have a decent amount of time on your hands, you can sprinkle the cucumber with salt and let the water leach out of it.  But if you're making it while the burgers cook, you can squeeze out the cucumbers just like you did with the spinach.  Otherwise your tzatziki will be runny, and nobody likes runny tzatziki.

My mini food processor was the perfect size for the amount of yogurt we had left.  We just used non-fat plain yogurt on hand, but I prefer to make it with Greek yogurt.  It just adds an extra bit of tang, and its a little thicker than plain yogurt.  Regardless, either will work just fine.  So into your food processor, toss the yogurt, some garlic, the cucumber, fresh dill, a splash of lemon juice, and some salt and pepper.  Puree it all together until the garlic and cucumber are finely chopped.  And there you have it.  Piece of cake! 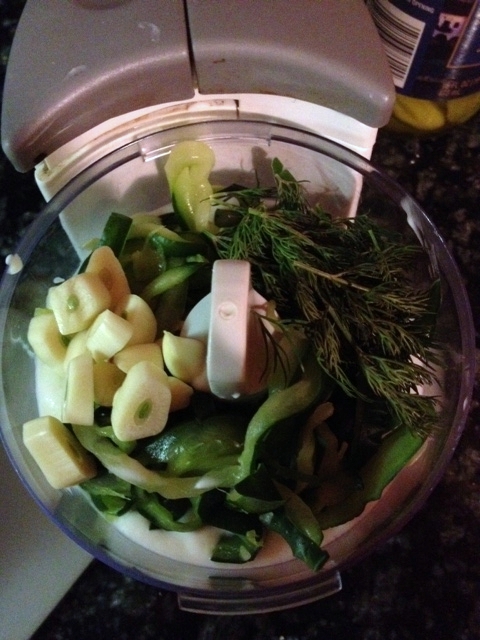 Sometimes when I make these burgers, I like to make a little salad to top the burgers.  This usually consists of sliced tomatoes, pepperoncini, red onion, and some arugula, dressed lightly with olive oil and red wine vinegar.  The only thing I had on hand this time were the pepperoncini, so I just sliced up a few for a little added spice.

And because you have to have fries with your burgers (I'm pretty sure there's a rule written somewhere to that effect), we made some sweet potato fries as our side.  And we had plenty of extra tzatziki leftover for dipping! 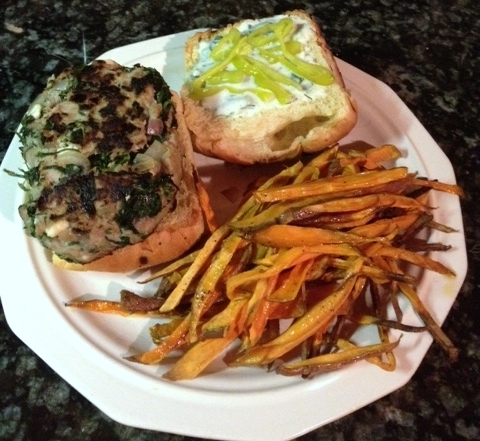