Tools of the Trade

I know its been almost a month since Christmas (where did the time go???), but I thought I'd go back and do another little recap.  But this time, I want to talk about the gifts Justin and I received.  Just about every present was food related, whether it was tools to add to our arsenal, cookbooks for inspiration, or random ingredients my mom found at a Hispanic market (I mean that Santa had his elves whip up in the shop).

So let's start with the equipment... 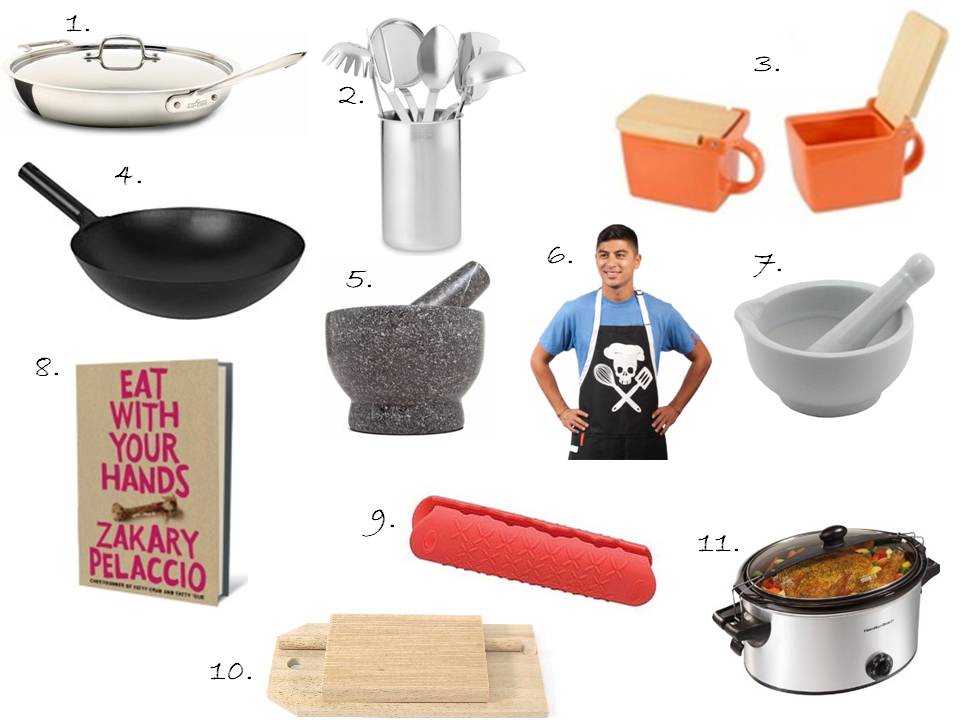 1.All-Clad 13 inch French skillet with lid.  I have a couple smaller All-Clad pans and they are awesome!
2. All-Clad Tool Set.  When mom asked what I wanted for Christmas, I didn't giver her much to work with. I just said that I needed a ladle.  So she came up with an entire tool set.  The one she found me is similar to the one pictured but also includes s slotted spoon and another spatula.
3. Salt box...though mine is currently holding pepper.
4. Iron Wok  Its made out of one piece of metal, so the entire thing gets hot, hence gift #9.  The wok made its debut when we made stir fry.
5. Granite Mortar & Pestle.  I still need to season it, but it should get plenty of use down the road.
6. Pirate Chef Apron.  Justin tends to be a little messy when he cooks.
7. Ceramic Mortar & Pestle.  It just so happens that Justin's parents had the same idea and got him a mortat & pestle too.  You may recognize it from our pig head post.
8. "Eat With Your Hands". This cookbook was listed as one of the top cookbooks of 2012.  My favorite part is that along with the recipes, Pelaccio gives recommendations for what to listen to and what to drink while cooking that recipe.  Justin has already read it cover to cover and is ready to start trying some of the recipes.
9. Silicone Pot Handle.  So the idea was for this handle cover to go with the wok.  Unfortunately, the handle of the wok is too thick for it to wrap around.  But I have another cast iron grill pan that we can use the handle on.
10. Gnocchi Paddle.  Now we won't have to use a fork to make the ridges!
11. 6-qt. Crock Pot.  Until now, I've just slow cooked things in my dutch oven.  But we broke her in by making some chili yesterday.

And then we unwrapped a few food items...

1. Squid Ink.  Santa brought both Justin and I a few packets of squid ink.  We're not sure how exactly we'll use the ink, but we've got some ideas in the works.
2. Bottarga.  If you're not familiar, this is cured fish roe.  The one that we got is mullet.  After our first experience with bottarga at the Feastly dinner, we're excited about using it ourselves.
3. Flavored Salts.  Not to be confused with bath salts...I don't think you'd want to snort or smoke these.  For Justin, I picked up the sriracha salt, roasted garlic salt, and aged balsamic salt.  They were so fragrant, you could smell them through the tins.  We sprinkled a bit of the roasted garlic salt onto our steaks.
Posted by Unknown at 1:57 PM