Last night we pretended to be adults and went to a dinner party.  Anyone familiar with Feastly?  Its a simple concept:  the host cooks a meal, you shell out some money to reserve seats, and you enjoy a tasty meal with some like-minded strangers.  Our first Feastly dinner was back in September...a Julia Chld-inspired meal, hosted by Lindsay and Matt of WellFed Group.  Not only are they veterans in the restaurant industry, but Matt is also the Chef de Cuisine at The Occidental.  So we basically ate at the chef's table for a fraction of the price.  When we saw they were hosting another Feastly meal, we jumped at the chance to join them again. 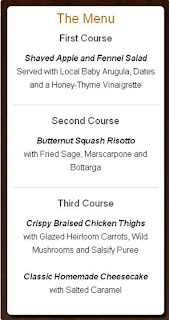 What the menu fails to mention is the delicious disc of goat cheese that was baked with brown sugar and pecans that topped the apple and fennel salad.  It was sweet and creamy, with the nice goat cheese tang.  The 2nd course was a rich and creamy risotto topped with bottarga.  I'd never heard of bottarga before, but it gave the risotto a nice, rich, umami flavor.  The risotto was followed up with a juicy chicken thigh, skin crisped to perfection.  The thighs had been confit'd for 8 hrs.  Yes, you read that right.  8 HOURS!  It fell right off the bone and just melted in your mouth.  Not to mention the salsify puree.  This was another ingredient I hadn't had before. Matt described it as being similar to parsnips, so I was expecting it to be a bit mealy.  I couldn't have been more wrong.  It was so creamy and silky smooth.  And if those 3 courses weren't enough, the meal was capped off with a salted caramel cheesecake.  It was so light and airy, and I think my favorite part was the sweetened sour cream they topped the cheesecake with.

We opted to pair our meal with some delicious beers.  Lindsay suggested a Saison for the first 2 courses, and a Belgian trippel or a hoppy IPA for the 3rd course.  We started with the Stillwater Saison, a citrus-y, crisp, clean ale.  A classic saison.  We followed that up with La Fin du Monde, a Belgian trippel.  It was a fruitier, more full-bodied beverage.  A perfect complement to the chicken thighs and salsify puree.  Had we not been driving, we may have tried to pair a 3rd beer with dessert, but we had a decent drive ahead of us and played it safe.

Not only was the food delicious, but the company was great.  We ate with complete strangers, yet there were never those awkward moments like when you're on a bad date.  We did the typical DC thing and played the "what do you do?" game.  Turns out one of our fellow diners was also a Wake Forest alum.  What are the odds?  But the uniting force was our mutual love and appreciation of food.  So if you're looking for a fun night out, good food, and meeting new people, I would highly recommend checking out Feastly.  Especially if Lindsay and Matt are hosting.  Just make sure you save 2 seats for us :)
Posted by Unknown at 11:08 PM