From New Orleans to New England

With our fresh Rappahannock River oysters and clams, plucked from the ocean on Monday, and in our fridge on Tuesday, we wanted/needed to use them right away.  Naturally we opted for oyster po' boys with a homemade aioli, New England style clam chowder, and sweet potato fries.  Here's what we started with: 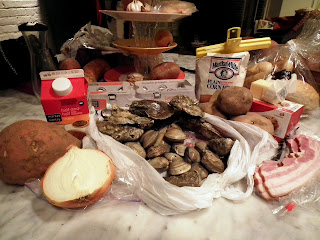 While I started working on the chowder, Justin went to work on shucking the oysters. 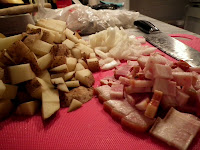 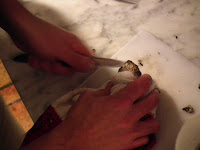 Thankfully there were no injuries while shucking oysters.  The only casualty was my paring knife, who lost its tip.  But it didn't land in the oysters :)  The clams cooked up in no time, and although they didn't require much time to steam and open up, they still left a really flavorful broth that we used in the soup.  We pulled out some McGyver skills in straining the oyster broth.  Since I don't own a fine mesh sieve, we used a coffee filter to separate the sand and grit from the clam broth.  It helps to have an extra set of hands for this part.  We also kept the oyster nectar, and threw some into the chowder and some into the aioli.  Once the clams opened up, I set them aside while making the rest of the chowder so they wouldn't overcook.  We kept the breading on the oysters simple...a little cornmeal and a little Dinosaur BBQ cajun seasoning.  *Side note: if you're ever in Rochester, Syracuse, or Harlem, do yourself a favor and go to Dinosaur BBQ.  They have the best brisket you'll ever have.  It just melts in your mouth.  I may have started drooling a little just thinking about it.*  Now, back to our regularly scheduled program. 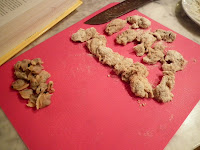 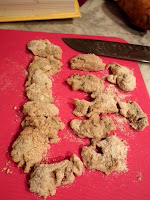 To top the po' boys, we used some of the homemade sauerkraut we had in the fridge (leftover from when we made buffalo pastrami reubens, another CSA meal!) for some tangy crunch, and a homemade aioli.  Justin has perfected the art of making small batch of aioli with an immersion blender. 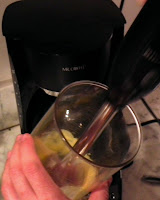 In the aioli we threw in some of the oyster nectar, sriracha, lemon juice, garlic powder, and some whole grain mustard.  It gave the po' boys a bit of a kick!  A few clams were thrown into the bottom of each soup bowl and we poured the chowder over it to warm them up again.  We even managed to not burn the sweet potato fries, and time everything pretty perfectly. 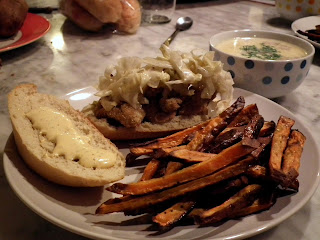 It was the perfect way to end the week and get ready for the weekend!