Its a new holiday...like Festivus!  Since we got oysters in our share again, and we still had sauerkraut lingering in the fridge, we thought we'd make po' boys again.  We followed the same protocol as the first time around.  Justin took care of shucking the oysters again and we came across this little fellow

So you're probably wondering what this little guy is.  We thought it was a little worm that found its way inside the oyster.  With a little research we learned that its not a worm at all, but an enzyme complex that's formed by the oyster when its been actively feeding.  So really, this is just a sign of freshness.  As if we needed another sign.  I mean, when I opened the bag of oysters and clams, they smelled like the salty ocean.  Anyway...since this wasn't a worm, and just confirmation of how fresh our oysters were, we marched on!

One thing I forgot to mention last time was that when we started building our po' boys, I pulled out some of the bread on the bottom bun to form a bit of a trough.  This gave the oysters a place to nestle in the bun...as if the oysters and bun were cuddling.

It made it a whole lot easer to keep the po' boy together once we topped the oysters with the 'kraut and top bun.  The oysters didn't squish out when you bit into the sandwich, and everything just stayed in place.

So that's the Mardi Gras part.  As for the -nukah part, we decided to make some sweet potato latkes.  With the start of Chanukah this past weekend, we thought it appropriate, and a nice compliment to the po' boys.  I turned to my trusty friend, Gojee, for a recipe and found one for sweet potato latkes with chipotle sour cream.  It was a fairly easy recipe too. 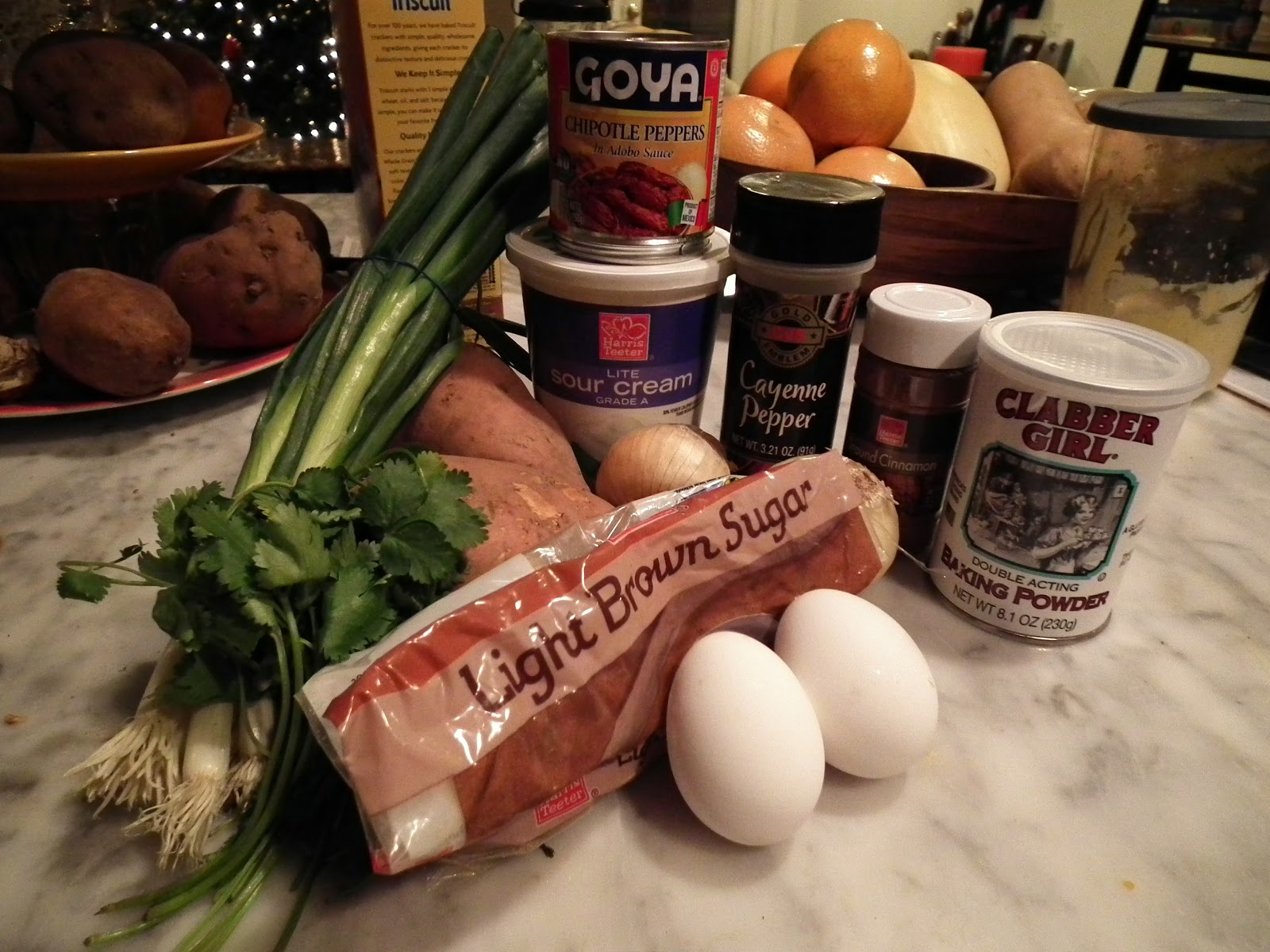 The sweet potatoes were grated and mixed with the eggs, flour, brown sugar, cinnamon, cayenne, some caramelized onions, baking powder, and since I didn't have cumin I used a little chili powder.  I covered the bottom of a pan with some oil and started dropping the latkes in for a shallow fry. 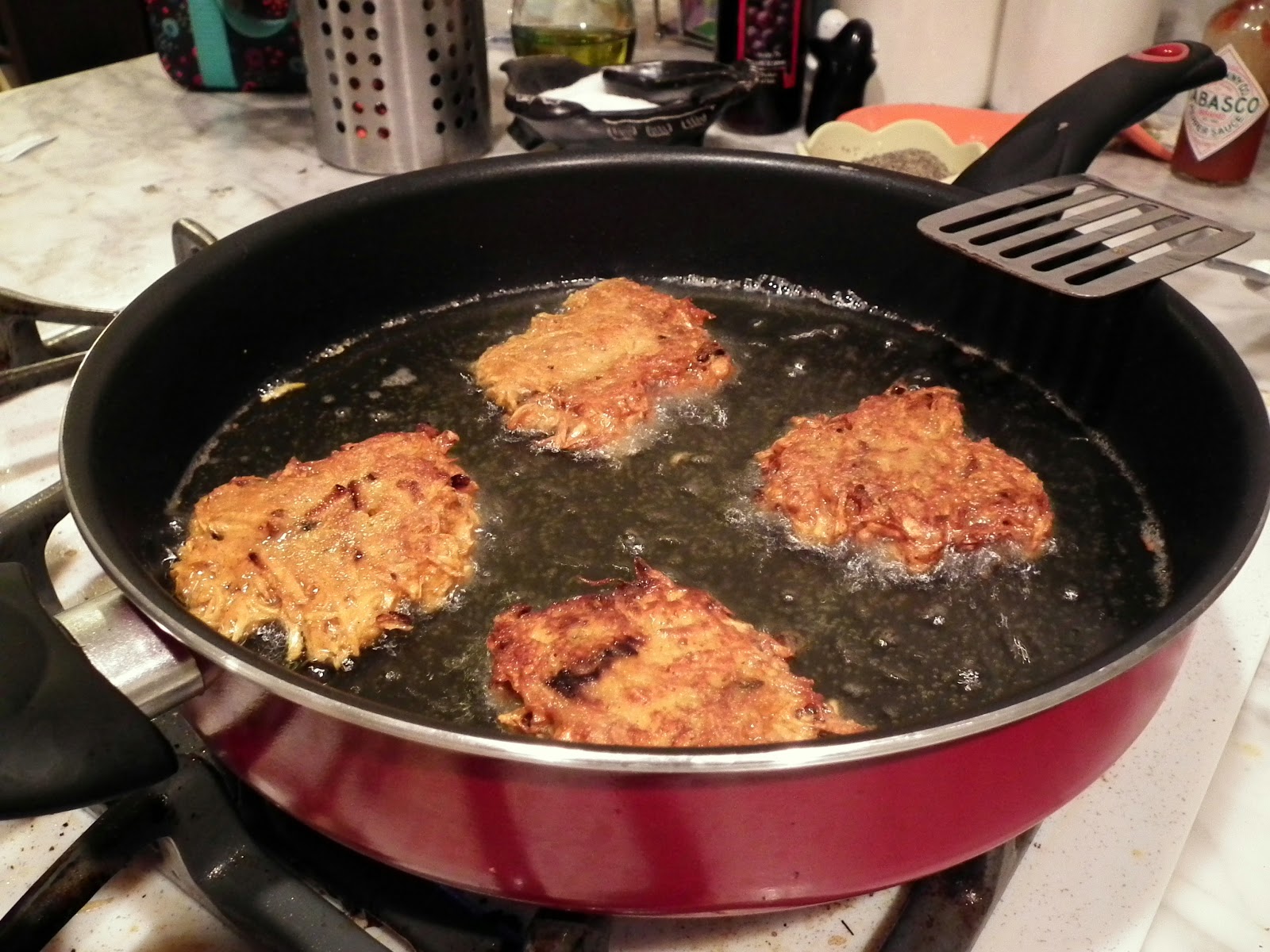 Just a few minutes on each side got them crispy and brown.  Once they were done I just placed them on a cooling rack over a cookie sheet, and kept them warm in the oven while the rest of them, and the oysters cooked.  This kept them from absorbing the oil, and allowed them to stay crispy!  The chipotle sour cream was super simple...all you need is chipotle and sour cream...duh!  Well, I couldn't find chipotle sauce (as the recipe called for), so I picked up a small can of chipotle peppers in adobo.  So I chopped up about 4 peppers and added that to the sour cream with some of the adobo sauce until it tasted perfectly smoky and spicy.  So the latkes got a dollop of chipotle sour cream and some cilantro and green onion. 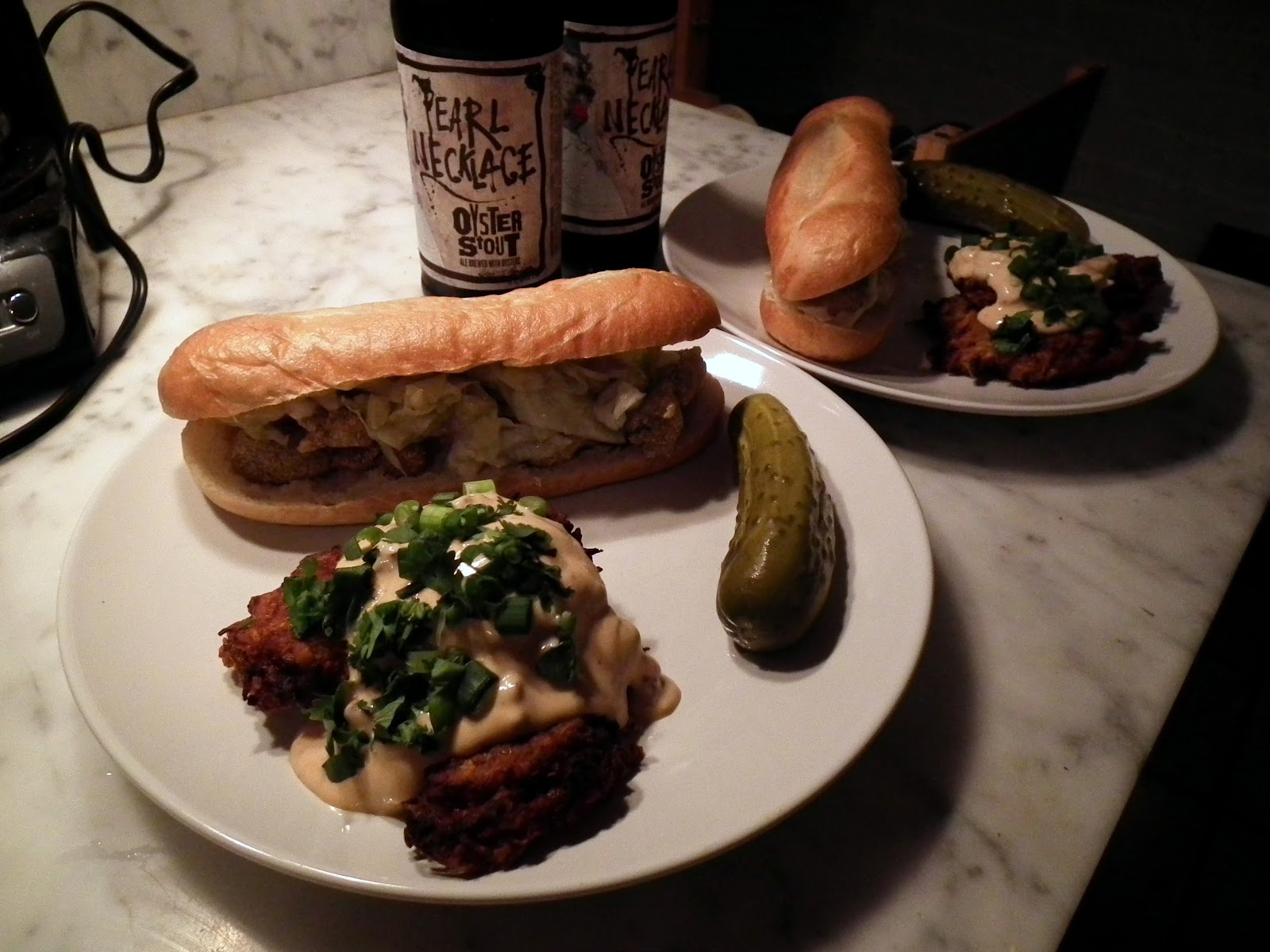 And to cap it all off, we paired the po' boy with a Flying Dog Pearl Necklace Oyster Stout.  The beer is brewed with the same Rappahannock oysters we ate!  It turned out to be such a tasty and hearty dinner.  Happy Mardi Gras-nukah!