Cloudy With a Chance of Meatballs

Maybe it wasn't cloudy today, but there was a 100% chance of meatballs!  Beef and turkey meatballs to be exact.  We needed something to go with our spaghetti squash.  The ground beef came from the CSA a few shares ago, and I had the turkey from a past Costco run.  To top it off, we used some left over pepperoni sauce, but I'll get into that shortly.

First, the balls of meat!  We had about a 1:1 ratio of beef:turkey.  To that, we threw in 2 eggs, some garlic, some panko, salt, pepper, red pepper flakes, and fresh parsley. 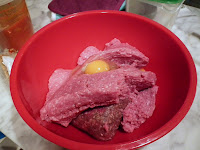 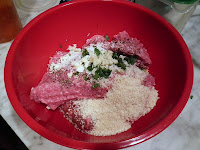 Now's the fun party where you get all messy and mix it up by hand.  We formed them into balls and put them on the baking sheet, ready for the oven.

At the same time, we cut the squash in half and scooped out the guts.  Each half was rubbed with a little olive  oil, and sprinkled with some salt and pepper.  Then, everyone went into the sauna, aka the oven, to cook.  We also threw n some garlic for the garlic bread (that's what the little foil ball is). 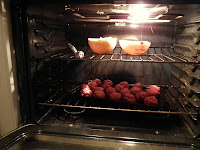 Once the squash is soft, you just use 2 forks to pull the meat from the sides, and it just shreds into strands, like spaghetti.  Super simple.  And since we have bottomless stomachs, we each ate a half.

Now for the sauce...glorious, glorious pepperoni sauce.  Did you watch Top Chef All-Stars, when they were at Ellis Island and had to cook food inspired by their heritage?  I'll give you a brief recap of the highlights.  Mike Isabella came up with pepperoni sauce...basically a puree of pepperoni and tomato sauce...put it over chicken thighs, and Gail Simmons claimed it was the best thing she'd ever eaten.  How had no one thought of this sooner?!?!?  Once Graffiato opened, and chicken thighs with pepperoni sauce was on the menu, I had no choice but to order it.  The sauce certainly lived up to the hype.  Thankfully Chef Isabella included the recipe in his cookbook, and we can enjoy it at home.  Its super easy to make, and ridiculously good.  It makes quite a bit, and we've actually made 3 meals out of one batch of sauce.

Now, back to dinner.  We just piled everything into a bowl and were ready to eat! 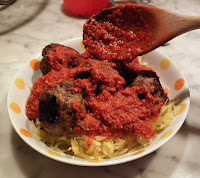 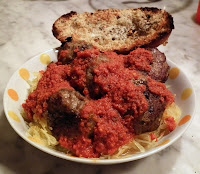 I've been in a bit of a food coma for the last few hours, so its probably about time to head to bed and pass out.
Posted by Unknown at 12:06 AM