I'm Dreaming of a Blaaack Fungus...

Ok...enough of the modified Christmas carols.  One of the many things I found so interesting about Kara were her stories about her Chinese side of the family, and all the great foods she grew up with and fun times shared over traditional meals.  Our first Chinese feast was amazing, featuring my personal favorite Cantonese dish - Honey Walnut Prawns, as well as a whole red snapper, gai lan (Chinese broccoli), and pea shoots.

How would we possibly follow that up you might ask?  Well, with hot and sour soup and tomato beef chow mein, of course! Our quest for this meal began with a trek out to Super H-Mart in Fairfax.  Kara called her mom on the way there with some clarification about the ingredients.  She mentioned dried mushrooms...lily root...and a black fungus.  She wasn't sure of the name, but described it as looking kind of like seaweed, and black. So we set out through the aisles of the store in search of the ingredients and much to our surprise we found a package of wood ear mushrooms with some writing, presumably in Korean, and in big bold letters in English, "BLACK FUNGUS".  Who would've thought the mystery black fungus would simply be called, black fungus?

Seeing  as how tonight was a rainy dreary night it was perfect for some delicious soup and satisfying noodles. We started with the ingredients we picked up at H-Mart and added some ground pork, some sirloin and of course some killer tofu.  Our first step was to rehydrate our dried ingredients in water-the aforementioned black fungus, the lily root, and dried mushrooms . 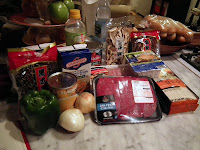 The next step was to get everything into the hot tub with some chicken broth. We seasoned our soup with some black pepper, vinegar, and a little Sriracha sauce. 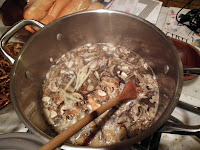 While our soup was cooking, I got to work on seasoning the beef.  Just a quick dredge in some flour and a toss with some soy and sesame oil.  The beef then got stir-fried in a wok with some green peppers and onions.  Some tomato sauce, curry, and hoisin sauce was then added to the wok. 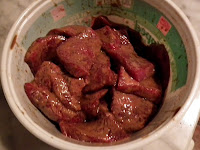 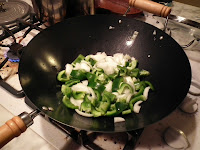 While our beef was frying the next step was to get our noodles were boiled, like pasta, then put under the broiler to give the dish a nice crunchy texture.  The beef and sauce then gets poured over the noodles.

The meal came together and we had a quick, tasty, authentic Asian feast whipped up on a Monday night.

With plenty of leftovers, since we still can't cook in small portions.