That's "Eat, Eat!" for those of you out there that don't speak Italian.

Since we went with the obvious the first time around, cooking clam chowder, we went with the 2nd most obvious dish...linguine with clam sauce!  For some veggies, we cooked up the brussel sprouts with some bacon and almonds.  So let's get to it!

I started with the brussel sprouts, popping them off the stalk and placing them on a cookie sheet with a drizzle of olive oil, salt and pepper.  Those went into the oven to get all roasty toasty!  We also pulled off the greens at the top to toss in with the sprouts later on.  We were left with a bare stalk...

I think it'll make a good beating stick for when Justin steps outta line! Hehehe :)  The bacon was next, getting a quick little chop and then tossed into the pan to get nice and crispy.  The onions were also thrown in with the bacon to soften and soak up some of the bacon delicousness.

Look how nice and charred and toasty those sprouts are!  Sadly, we overcooked them slightly and they were a tad bit mushy in the middle.  But the leaves were crisp, and once they rolled around with the bacon, it made up for the overcooked centers.  Bacon makes everything better, right?

Meanwhile, Justin was handling the other half of the meal.  Since he's part Italian, I figure its better to let him take care of the sauces.  In a giant pan, he melted some butter, and threw in a bunch of garlic and onions.  Once those sauteed for a while, in went the clams.  It didn't take long for them to pop open and impart a little oceany flavor into the pan.  We also threw in some white wine for an extra bit of flavor.

Once the linguine was al dente, we made sure to reserve a cup of the starchy cooking water.  Its always good to add a bit of the starchy water to whatever sauce you're making because it will help the sauce stick to the pasta.  Oh!  We also threw in some grated parm and pecorino for a little salty deliciousness, and to help thicken the sauce a bit.  I removed the clams from the pan, added a splash of the starchy water, and then threw in the pasta.  Removing the clams made it much easier to get the pasta coated in the garlicky, buttery, clammy sauce.  On the other side of the stove, the brussel sprouts were being coated in the bacon delicousness, and I threw in some chopped almonds for another little crunch. 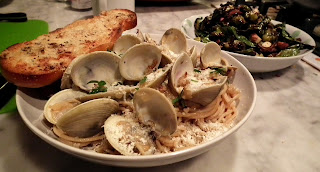 Until next time...buona notte!
Posted by Unknown at 11:22 PM