We finally made it there last Saturday for dinner, and it was everything a pork lover could ask for.  Every dish, minus a select few, contain some form of pig.  Neither of us are the best decision makers when it comes to food, so it took us a while to pick and choose our plates. But while we mulled over the menu and debated our options, we partook in some drink selections.  The pig has a small but very good beer selection, and some pretty creative and tasty mixed drinks.  I opted for, The Squealer, a lively mix of green mountain vodka, meyer lemon cordial, mint, and topped off with a little seltzer.

What better way to start a meal then with charcuterie?  Since it was just the 2 of us, we opted for the Little Pig...a selection of 3 cured meats, house-made pickles, condiments, and grilled breads.  The meats were soppressatta, smoked ham, and capicola.  I'm not a huge fan of ham, but this one was nice and smoky.  There were 2 condiments on the board; a spicy mustard and an herb based sauce.  The herb sauce was so basil-y and fresh tasting...I almost starting eating it by the spoonful.  The pickles and olives were nice, tangy compliments to the meats.  I really liked the pickled beets because they weren't overly pickled.  They still had a lot of crunch, and their sweet beet flavor.

Next were the crispy pig ears atop arugula and caramelized onions.

The marrow vinaigrette was really tasty, but I think the ears were sliced a little thick, so they weren't as crispy as I would've liked.  Some of them were a but tough to cut threw and chew.  If you want some crispy pig ears, I'd recommend trekking out to Frederick for the crispy pig ear salad at Family Meal.  Its certainly worth the drive.

Anyway...back to The Pig.  The wild boar ragu was delicious, and the boar spoonbread with mushrooms and truffles...I don't even have the words for it.

The spoonbread was my favorite dish of the night.  It was perfectly crusty and savory and salty, and so rich.  I'm salivating just thinking about it.  Justin's favorite was the porchetta. 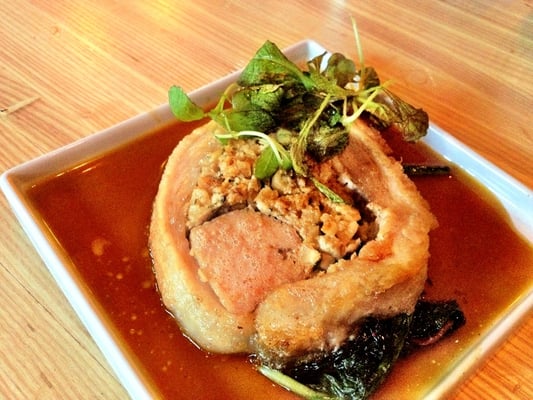 And this was my first foray into eating brains.  Yep...there were brains rolled into that porchetta.  It was pretty tasty, and the hazelnuts gave it a nice crunch.  Plus, how can you go wrong with a dish covered in hog gravy?  And because we needed a few more veggies, we went with the special of the night: roasted brussels sprouts in a spicy peanut sauce.  The brussel sprouts were perfectly charred, and still had some bite to them.  And the peanut sauce with Thai chilis was a nice contrast to the rest of our meal.

Our bellies were way too full to try any of the desserts, though it was very tempting.  I'm anxious to go back and try some of the other plates.  Its a great, rustic and casual place for everything swine, and we will certainly go back for more of that magical creature!

*Pictures were taken from Yelp.
Posted by Unknown at 11:03 AM