Ok, I guess it doesn't quite have the same ring to it as Friday, but it brings the same excitement since we finally had a CSA share to pick up.  It feels like an eternity since our last share, and we were both chompin' at the bit to see what we'd get today.  So ...without further ado... 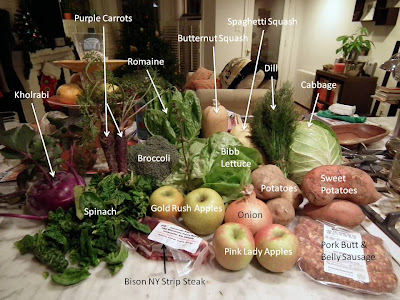 Wouldn't it be our luck that we got ANOTHER cabbage!  We're really excited about our meat share...the bison NY strip steak and the pork sausages.  For the sausages we had a choice between ham with cider, or pork butt and pork bellies.  It was an obvious choice here.  I'm pretty excited about the purple carrots and the kholrabi as well.  I don't think I've eaten kholrabi, so it will be fun experimenting with it.

And since its been a while since we've whipped something up in the kitchen, we're bringing you tonight's meal...free of charge!

We thought ahead for once and defrosted some chicken overnight, knowing we'd need a protein to go with whatever veggies we picked up tonight.  To keep things simple, and since I scored a new wok for Christmas, we settled on a Thai peanut stir-fry. 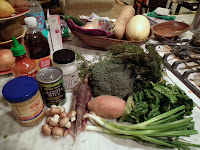 Look how pretty these carrots are!

While I finished chopping everything, Justin was busy cutting the chicken breasts into chunks.  Then he lightly coated them in some seasoned flour.  We used coconut oil to cook everything, so that went into the wok with a few cloves of minced garlic.  Once that was nice and aromatic, we threw in the carrots and sweet potatoes, since those would take the longest to cook, along with the chicken. 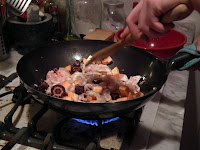 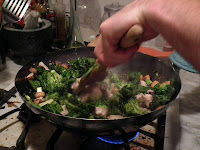 
Once the spinach wilted, it was time to make the sauce.  We started by adding the coconut milk.  Then came the peanut butter. 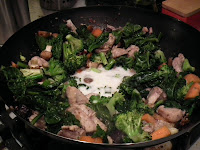 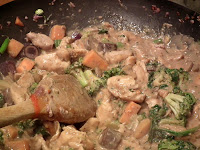 We just kept mixing and stirring until the peanut butter had melted down and everything was coated in sauce.  To top off the dish, we toasted up some sesame seeds, drizzled on some sriracha, and sprinkled on some chopped dill. 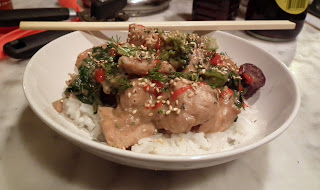 It was a great way to kick off this week's share!
Posted by Unknown at 11:11 PM