We've had our fair share of sports this weekend...a Wake/Maryland basketball game yesterday, the Caps/Pens game this afternoon, and the Super Bowl to round things out.  So what better way to cap off the weekend than with a proper spread of delicious bar food?  On the menu tonight were some wings, buffalo chicken dip, and "crack bread".

So let's start with the wings...a bar/sports staple.  We seasoned the wings with a little roasted garlic salt and some pepper, and placed them on a cooling rack, on top of a baking sheet.  This helps get all sides of the chicken crispy, and lets some of the fat drip off.  After about 10 minutes, we flipped the wings to make sure all sides were equally crispy. 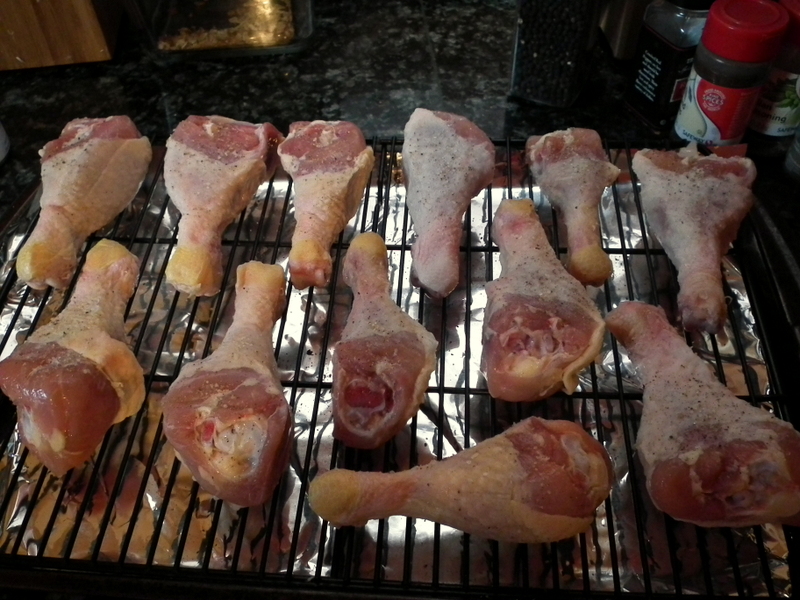 While the chicken baked, we mixed together the sauce for our wings.  We went with a coriander chutney for some spice, and mixed it with Greek yogurt for a little extra tang.  Once the chicken was cooked through, we dunked them in the chutney/yogurt mixture.  Back into the oven they went to crisp up again.  Think of it like tandoori chicken...the yogurt and chutney bake into the chicken, the outside is nice and crispy, while the meat stays really juicy. 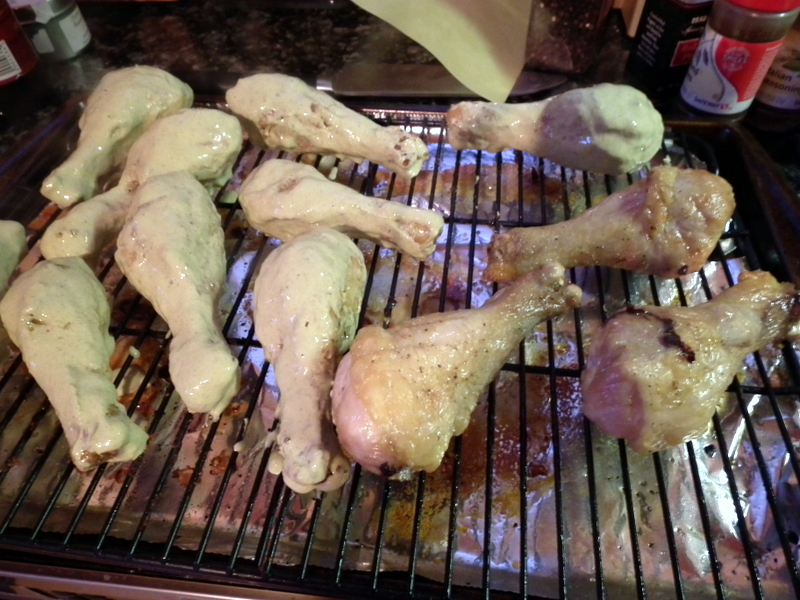 The wings cooked for another 15 minutes on each side.  To the leftover sauce, we added a little cilantro, lime zest and lime juice to use as a dipping sauce for the wings.  Once the wings came out of the oven, they got a sprinkling of cilantro and squeeze of lime juice. 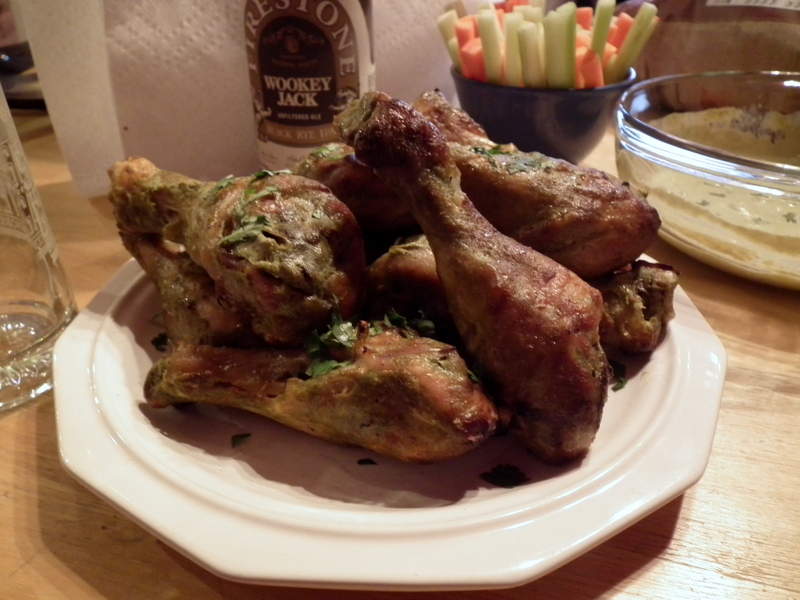 Dish 1 down.  Now on to dish 2...the "crack bread".  Its basically a pull-apart bread with cheese and bacon.  Think of it as an alternative to loaded potato skins.  We started with a loaf of sourdough, cutting it horizontally and vertically, but not all the way through.  You're making nooks for all the cheese and bacon to go.  Rather than using bacon bits, we cooked up our own bacon.  And the secret to it all is the melted butter mixed with a little bit of ranch dressing mix that gets drizzled over the entire loaf. 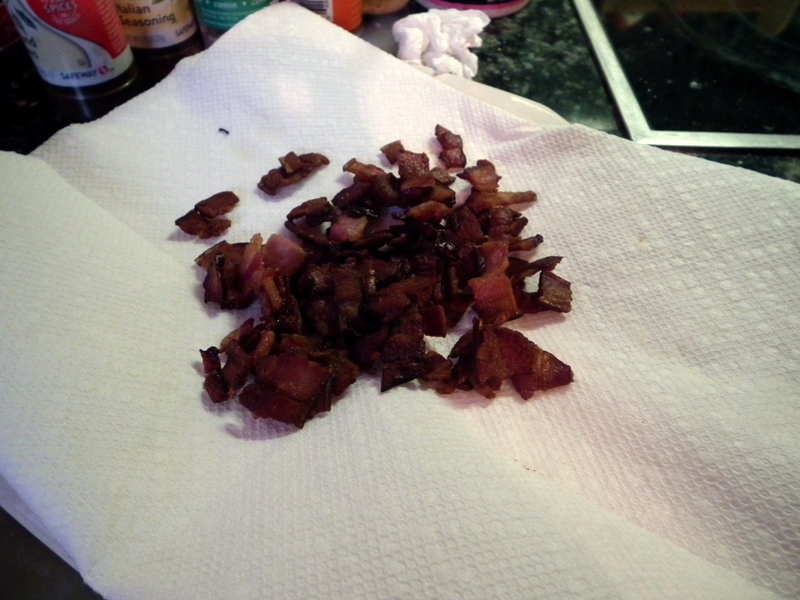 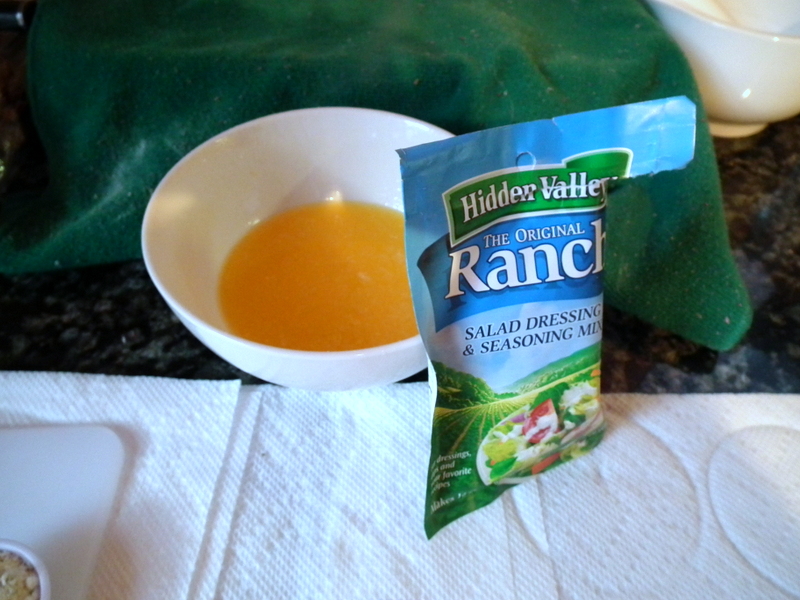 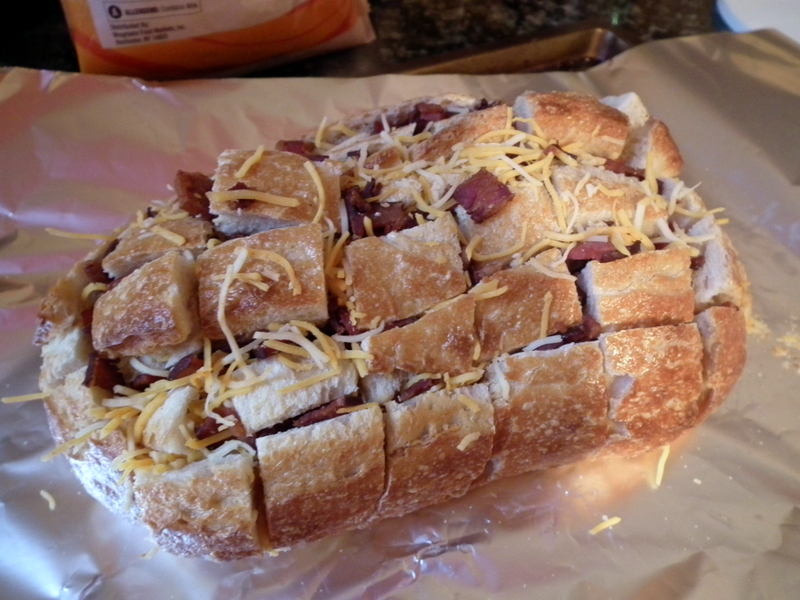 The recipe calls for slices of cheese, but I've found that shredded cheese is easier to sprinkle into all the nooks and crannies.  Its best if you can have one person spread the bread apart while someone else sprinkles the cheese.  Once you've distributed the cheese evenly, do the same with the bacon.  Then you drizzle the butter/ranch mixture over the entire loaf.  Pop it in the oven, wrapped in foil for about 15 minutes, and then another 10 minutes uncovered.  What you're left with is a crusty, melty, savory finger food. 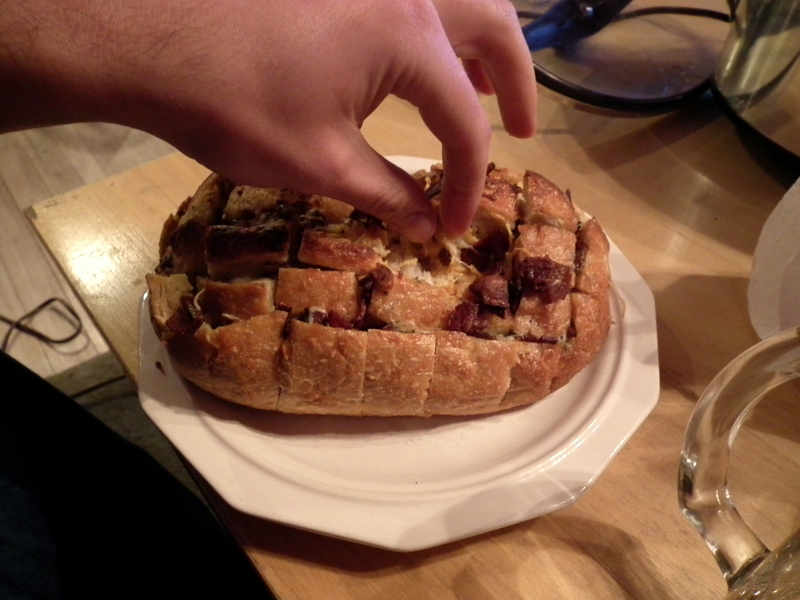 And last but not least...buffalo chicken dip.  If you haven't had the fortune of experiencing this delightful treat, you should go ahead and make this right now.  We seasoned 2 chicken breasts with salt and pepper and popped them in the oven to cook for about 20 minutes.  While those cooked, we fired up the crock pot and threw in a brick of neufchatel cheese to soften up.  You can use cream cheese instead, if you want.  Because we had some extra yogurt and ranch dressing mix, we threw them together and added that to the crock pot as well, in place of the blue cheese dressing.  Its our slightly healthier spin on the dip...I mean, it was 0% fat greek yogurt ;)  For the blue cheese part, we added in blue cheese crumbles.  And to top it off, add in buffalo sauce.  We went with Frank's.  Once the chicken is cooked, shred it up and add it to the pot.  Then sprinkle a bit of shredded cheese on top and let it heat up and melt together.  What you're left with is a delicious dip that you can serve with chips, celery and carrots. 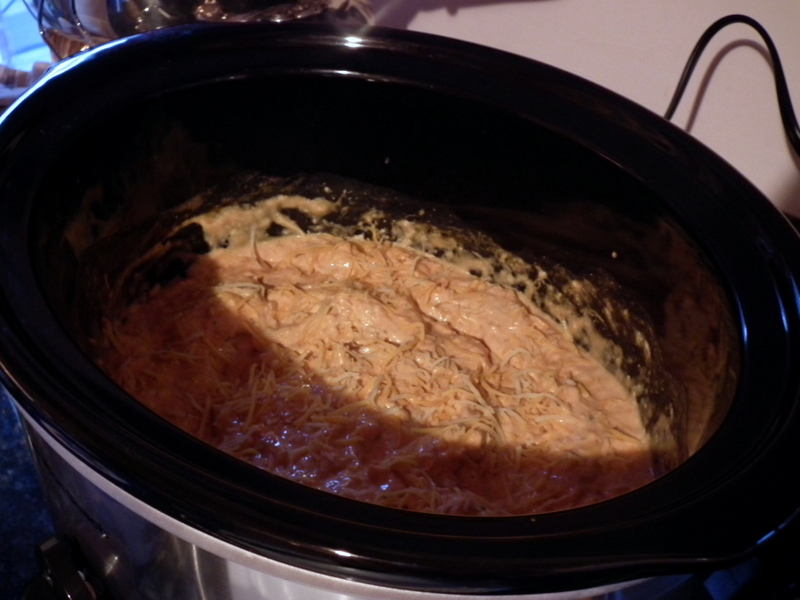 All 3 dishes came together rather quickly and with few dishes to clean up (my favorite kind of dishes!).  Throw in a few beers, and you have the makings of a great Super Bowl spread! 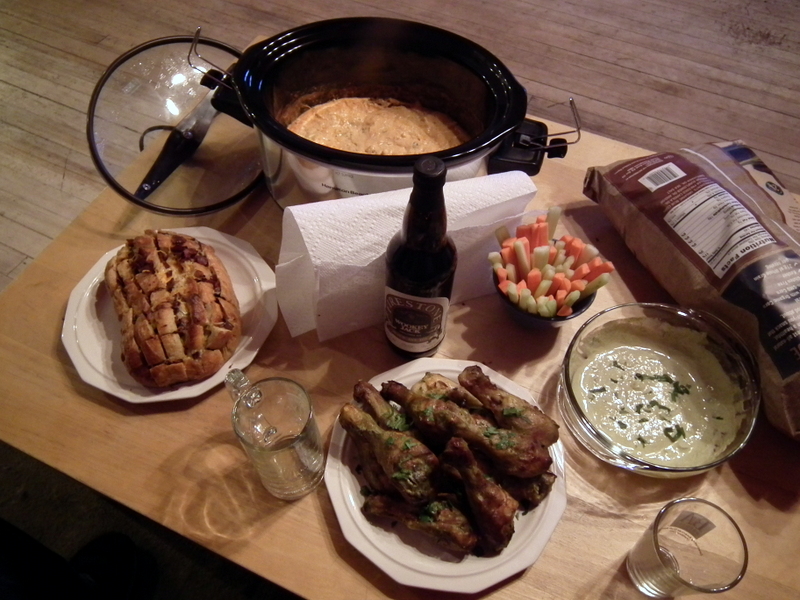