Wednesdays can be a tough day to get motivated to cook dinner.  You're bogged down at work, already looking toward the weekend.  Although fish is more of a Friday thing this time of year, trout and spinach were all that remained of our share, so tonight that's what we did.  We got a late start, but luckily tonight's dinner came together in a matter of minutes.  No joke! 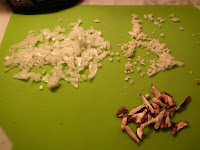 Justin was in charge of the sauteed spinach.  He started by chopping up some garlic, onion, and the shitake mushrooms from the share.  Into the pan they went with a little butter, where they cooked down for a few minutes, until the onions and garlic were soft.  He also added a dash of red pepper flakes for some heat. 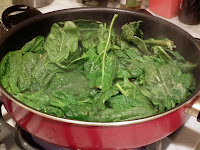 Once that all cooked down, he added the spinach, and a little white cooking wine to deglaze the pan.  It took just a few more minutes for the spinach to wilt down.


While Justin took care of the spinach, I got to work on our whole trout.  Since we had some lemon, onion, and cilantro to use up, we decided to stuff our little guy with all of those tasty ingredients, along with some garlic and ginger. 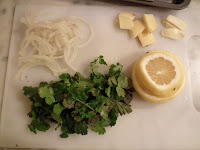 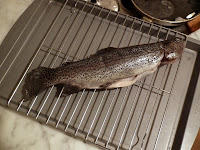 Before stuffing him silly, he got a sprinkling of salt and pepper on both sides of his skin, and inside.  Then I filled his belly with the garlic, ginger, some of the sliced onions, some of the lemon slices, and about half of the cilantro.  I also made a little bed of lemon and onion for him to rest on, and to serve as a little blanket for him. 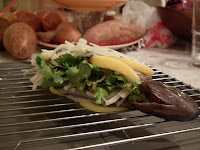 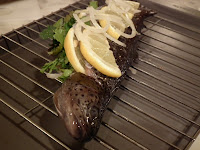 Into the oven he went for about 7 minutes on each side.  The flavors melted into the fish, and the skin got a bit crispy.  We topped him off with the remaining fresh cilantro.  So in about 20 minutes, we had a delicious meal.  We also had the leftover polenta with kale that we made the other night.  I think it was even tastier as a leftover!  But if you're looking for a quick meal to throw together mid-week, or any day of the week, try this out.  The flavors of the lemon, ginger and cilantro were subtle, but they were there. 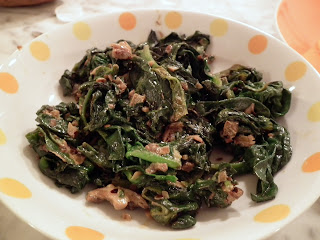 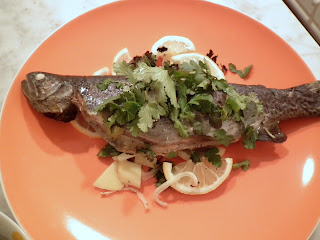