Justin's been dying to cook something out of his Eat With Your Hands cookbook that I gave him for Christmas.  So when we got oysters in our share again this week, he jumped at the opportunity to make oyster banh mi.  If you're not familiar with this delicious Vietnamese sandwich, I'll break it down for you.  You start with a nice, crusty baguette, some kind of meat in the middle, pickled vegetables, and pate.  The baguette and the pate harken back to the French influence that once reigned over Vietnam.

So here's our version, ala Zakary Pelaccio...

We started by making a sambal aioli.  We toasted up some shrimp paste (belecan) to take some of the stinkiness out of it.  If you haven't experienced it, you can smell it from across the room, and its a pretty pungent smell.  But it adds a great flavor to dishes.  This was mixed with some chili garlic sauce and our homemade aioli. 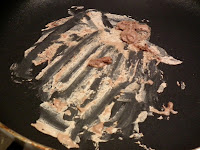 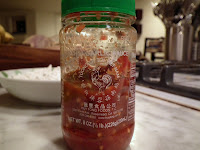 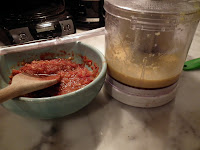 For the pickled vegetables, we stuck with carrots and daikon, marinated in a bit of vinegar, fish sauce, honey and cayenne.  This added a bit of acidity, sweetness, and crunch to the sandwich. 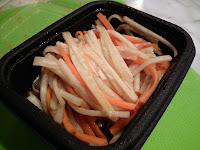 The oysters were tossed in a bit of flour, cornstarch, salt and white pepper.  Then we dropped them into the hot oil to fry up.  They were ready in a matter of minutes. 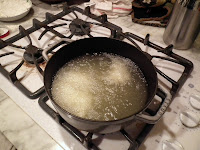 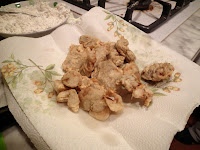 Then it was time to build the sandwich!  We toasted up the buns, and just like we did for our po' boys, I pulled out some of the bread from each side to make little troughs for everything to sit in.  The sambal aioli went on both sides of the bread.  On top of the oysters we laid a few slices of mortadella.  This replaced the traditional pate.  Then some fresh cilantro and some of the pickled veggies topped things off.  To drink, Zak recommended Asahi, but none of our local beer suppliers had bombers of it, and we forgot to pick one up at H-Mart, so we had to come up with an alternate drink pairing. We went with a Vietnamese-style iced coffee.  Since we only had regular coffee, we brewed some up, let it cool, and added it to some sweetened condensed milk.  It wasn't as strong as your typical Vietnamese iced coffee, but it did the trick! 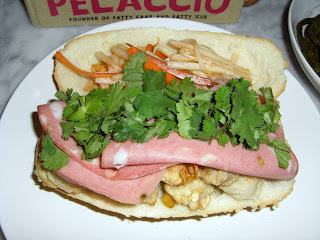 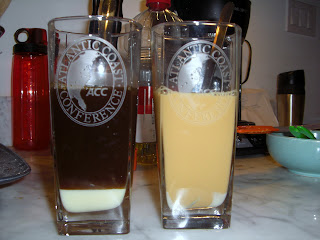 Even though there were so many elements in one sandwich, the individual flavors came through, and played off each other nicely.  The oysters were sweet, the mortadella added a little saltiness, there was some spice from the aioli, acidity and crunch from the pickled vegetables, and freshness from the cilantro.  Not to mention the crusty, toasty bread.  It's definitely the best banh mi we've had in DC!
Posted by Unknown at 10:52 PM