Valentine's on the Range 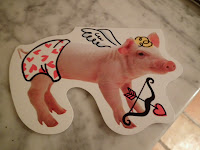 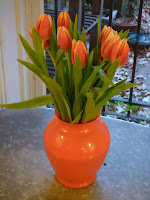 If you're anything like me, Valentine's Day is just another day on the calendar.  Personally, I think you should tell/express your love for the special people in your life EVERYday...not when Hallmark tells you to, once a year.  And fellas (if there are any fellas out there reading this), don't be like every other dude out there and send red roses.  That takes no thought whatsoever.  What's more impressive and more meaninful to us women, is if you've paid attention, and know what our favorite flowers are, and send us those.  Even better is if you just surprise us on a random day with a few fresh blooms.  Those thoughtful gestures go a much longer way throughout the year than a dozen red roses from the guy on the corner on February 14th.

Anyway...I'll step off my soapbox, and get back to the food.  Justin surprised me with reservations at Range, the newest restaurant by Bryan Voltaggio.  It's unique in its location (within a mall), and it's size (it used to be a Stein Mart), but the decor and ambiance within the restaurant make up for it.  We were seated near one of the many open kitchens, where you can sit at a counter and watch the chefs prepare food.  It's a small plate concept, but the dishes are larger than your typical tapas, and there is quite the range of food to choose from.  I guess that's where the name comes from?  We'd dined at his more casual spot, Family Meal, back in August when we made a road trip out to Frederick, so we were expecting another delicious meal, and that's exactly what we got.

We started at the bar since we arrived early, and found a menu of unusual ingredients and combinations.  I started with the "Wonder of Neglect", a gin-based drink that included pineapple shrub, vermouth, and oak.  Now when I saw "shrub" as one of the ingredients, I assumed that just meant it was part of the pineapple...maybe some of the green leaves, or the pith?  But the bartender explained that shrub is a vinegar-based syrup.  He likened its unique flavor and tang to kombucha.  Justin also opted for a gin-based drink, though his included kombu broth, st. germaine, and hellfire bitters.  Both drinks were unique in their flavors, but really tasty.

Once we were seated, our server guided us through the menu, recommending how many dishes to order, etc.  There is so much to choose from, and it was a bit overwhelming when we first sat down.  We started with the bread basket & spreads, which offered a skillet cornbread with bacon marmalade, cheddar chive biscuits with pepper jelly, flat bread with some hummus, and a couple other standard breads with smoked cream cheese and rosemary lardo, as additional spreads.  The bacon marmalade was the standout favorite.  It was so smoky, with a hint of sweetness.  I could've eaten jars upon jars of it.  I was expecting some heat from the pepper jelly, but instead found it to be on the sweet side, which I enjoyed with the cheddar biscuits.  Next time though, I think I'll just stick with the cornbread.

Next up was the rockfish collar.  You may be familiar with himachi cheek, which you can sometimes find at Japanese/sushi restaurants.  This is similar.  It was roasted and served with some sofrito and lemon.  Shout out to our server who put the order in first so we could score one of the 3 remaining collars!  Thank you, Sam!

The fish was followed up by the kimchi linguini with uni and scallops.  I know Justin had had his eye on that dish ever since news broke about the restaurant.  Sadly, the pasta lacked any kimchi flavor, and probably could've used another minute to cook, but the rich, brininess of the uni, and the perfectly cooked scallops brought the dish around.  The nasturtium on top added a nice freshness to the dish as well.

Then came the "main" courses.  We went with venison, served with espresso spaetzle, and the pork cheeks on celery root puree.  The venison was cooked perfectly, and the spaetzle had a nice, subtle espresso flavor that paired nicely with the meat.  The pork cheeks just melted in your mouth, and the puree was so smooth and creamy, yet still had a fresh, celery flavor.

For sides/vegetables, we went with roasted cauliflower with almonds, golden raisins and zhatar, and the roasted salsify that was served with hazelnuts, and some crispy citrus bits on top.  The cauliflower was a bit forgettable, but I really enjoyed the salsify.

This was the perfect amount of food, but we couldn't resist the desserts, and the rolling cart of confections that had passed us by throughout the meal, filled with jars and cloches or sweet treats.  I'm not a big sweets person, so we opted for the goat cheesecake for dessert.  Out came 4 little squares of cheesecake, 2 topped with blood orange, and 2 topped with kumquat, with a cannele of meyer lemon sorbet.  The tang of the goat cheese really came through, but it was balanced out by the sweetness of the blood orange and kumquat, and by the tartness of the sorbet.  And of course, we had to get a close-up look of all the delicious confections.  There were 13 kinds of truffles, brittle, biscotti, cookies, rice crispy treats, oh my!  There was so much to choose from.  The nice thing was you had the option of eating it there, or having it wrapped up to take home.  So we came home with 2 pistachio yuzu truffles, a gingerbread spiced marshmallow, and some smoked cashew brittle.  While finishing up this post, we decided to bit into the brittle.  It's nice and smoky, but not overpowering, with the sweetness from the brittle to balance it out.  The marshmallow was light, and fluffy with a nice gingersnap taste.

The other nice thing about this venue is that it is so big that it wasn't jam packed with people.  I don't know if they did that on purpose, but there were a few empty seats and tables scattered throughout the restaurant, so it didn't feel like you were being rushed out of there so they could turn the table.  The bartenders, servers, and sommelier are super knowledgeable and very friendly.  It was just great food, great service, and great company!  We will definitely be back to try some of the many, many dishes still awaiting us on the menu.
Posted by Unknown at 6:25 PM