Tonight we thought we'd try something different, and put a twist on your traditional pesto.  I've seen recipes for pestos made with arugula or parsley instead of basil, and walnuts instead of pinenuts, so why not try making a pesto out of all those creasy greens we have?

We pulled all of the leaves from the stems and threw them in the food processor with some garlic, toasted pinenuts, and parmesan cheese.  Once it was pureed, we streamed in some olive oil.  With a bit of roasted garlic salt, pepper, and red pepper flakes, the pesto came together quite nicely. 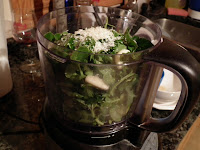 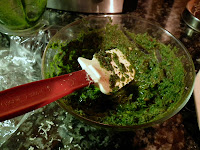 We let all flavors in the pesto mix and mingle together while we put the chicken involtini together.  We started with 2 chicken breasts that we pounded out, then seasoned with salt and pepper.  Inside we put some slices of mozzarella and some sun-dried tomatoes.  Then we rolled up the chicken so everything was tucked away inside, and used some skewers to hold them all together.  The chicken went into the oven to cook for about 20 minutes. 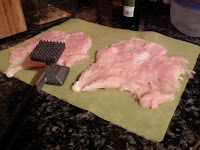 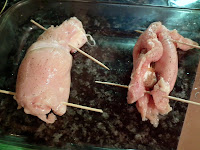 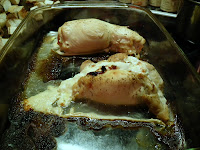 Next, it was time to prepare the turnips.  The last times we got turnips in the share, we made a puree, so we wanted to do something a little different this time.  We found this recipe for roasted turnips with a mustard vinaigrette, and thought we'd give it a shot.  So we chunked up the turnips, tossed them in a little olive oil, salt and pepper, and threw them into the oven (with the chicken) for about 15 minutes, until they were roasty, toasty, golden brown. 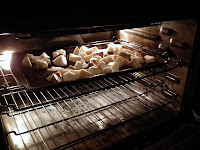 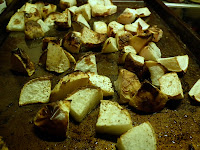 The vinaigrette was really simple to whisk together; a little whole grain mustard, a little white wine vinegar, a scallion, some parsley, and a little oil.  Once the turnips had cooled, we tossed them in the vinaigrette, and sprinkled a little fresh parsley on top. 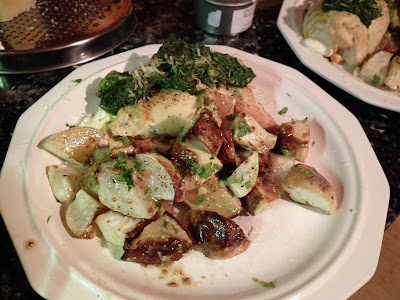 There was a wide variety of flavors on the plate.  There was a nice contrast between the the herb-y pesto, the acidity from the sun-dried tomatoes, the rich mozzarella, and the slight sour tang of the turnips and mustard.

But we didn't stop there!  While we ate dinner, we let our dessert bake.  That's right, folks.  We made dessert!  But don't be fooled...it wasn't a multi-layer cake, or anything fancy like that.  We sliced up the 2 gold rush apples we had, and covered them in pecans, cinnamon, nutmeg, ground ginger and brown sugar.  For the topping, we smashed together some oats, brown sugar, butter, and chopped pecans.  We covered the apples with the oat crumble, and sprinkled a little cinnamon and sugar on top to kind of brulee the top. 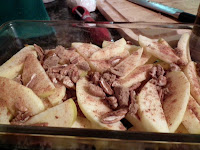 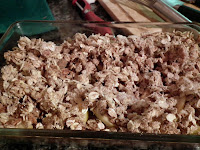 By the time we were done eating dinner, the crumble/crisp was just about done.  I don't like my dessert cloyingly sweet, or my fruit pies/crisps/crumbles extra syrup-y, and I want my fruit to still have some bite to them, so this was a perfect dessert. 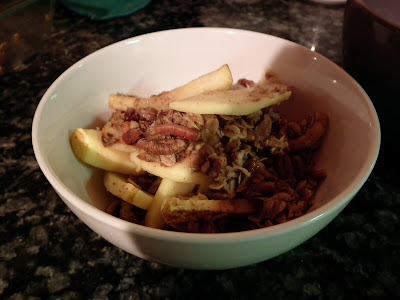