Though we're trying to eat a little more healthy these days, every now and then you need a comforting, rich Sunday dinner.  Since we had potatoes from the share, we went with gnocchi in a rich cream sauce.  Making your own gnocchi may seem daunting, but its actually fairly simple.

To start, poke your potatoes with a fork so the steam can escape, and pop them in the oven for about an hour.  You want them to cook up, and for the moisture to escape.  Otherwise your dough will be sticky and heavy.  Once they're out of the oven, peel them, and push them through a ricer, if you have one.  We don't, so we just made sure there weren't any big lumps of potato. 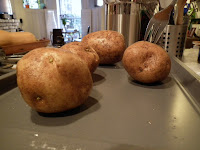 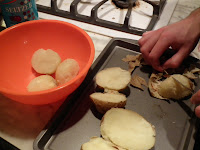 To the potatoes, you'll add a couple egg yolks, some flour, grated cheese (we used pecorino), and some salt.  Since we were going all out, we used a combination of kosher salt and truffle salt.  Gradually add the flour in, as needed.  You want the dough to pull away from the bowl and not feel sticky.  When you reach that consistency, stop adding flour, and start rolling out ropes of dough. 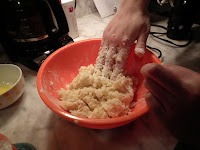 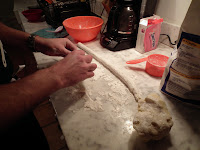 Then you can start cutting the ropes into the gnocchi.  We put our gnocchi board to use to give each one the little ridges, but you can also just roll them down the back of a fork.  Place them on a floured tray or plate until you're ready to cook them. 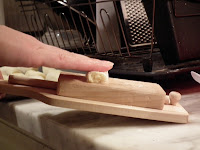 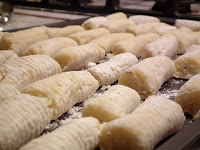 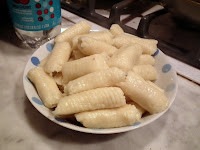 Cooking them is really simple.  Just boil a pot of water, as if you were making any other kind of pasta.  Be sure to salt the water too.  Once it's boiling, drop in a bunch of the gnocchi.  You'll probably have to do a few batches so you don't over crowd the pot.  They'll tell you when their done by floating to the surface.  Fresh pasta takes a little longer than dried pasta to cook, about 3-4 minutes instead of the two or so for the dried.  Then just scoop 'em out and place them in a bowl until you're ready to toss them in your sauce.
For the sauce, Justin whipped up one of his signature sauces.  It starts with some brown butter, shallots, and garlic.  Then you add some cream, pecorino, sun-dried tomatoes, mushrooms, and sage.  We also added a splash of truffle oil. 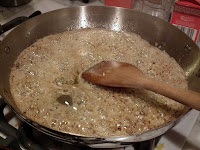 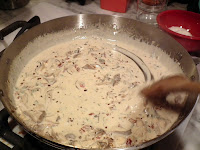 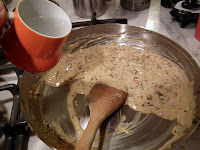 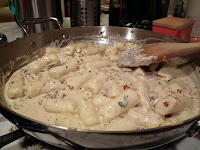 To finish off each plate, we sprinkled on some crisped guanciale, a little more pecorino, and some fried sage.  It's such a rich, and filling dish, but so full of flavor. 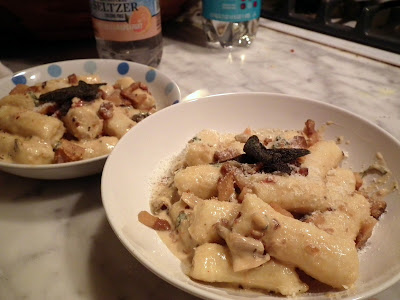 This was a perfect dish for Oscar night, it had the glitz and glam of Hollywood from the truffle, and was hearty and comforting just like a night on the couch.
Posted by Unknown at 10:01 PM