Though we're not partying down on Bourbon St. tonight, we're still celebrating with some good ol' jambalaya!  So throw us your beads and we'll show you our andouille! Since neither of us are southern or creole, we figured we'd consult our good friend, Emeril, for his take on the tasty dish.

Like most good soups and stews, we started with some onions and bell pepper.  We let this cook down a bit and get nice and caramelized in a little vegetable oil, salt and cayenne. 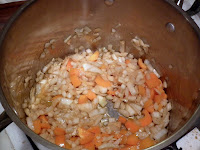 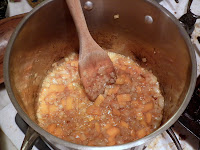 After about 15 minutes, we added the andouille sausage.  We'd made a trip to Union Market on Sunday where Red Apron Butchery has set up shop.  They have a great looking array of meats including porkstrami, and a variety of sausages, so we're definitely planning to go back and try their other offerings. 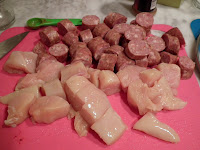 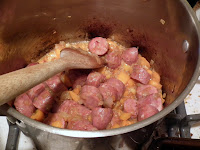 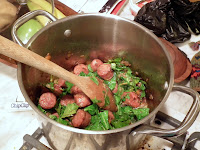 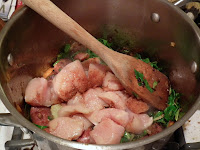 Once the sausage and collards had cooked, we added the chicken, which had been seasoned with some salt and cayenne.  It took about 10 minutes for the chicken to brown.  We had to keep stirring and scraping the brown bits from the sides and bottom of the pot too. 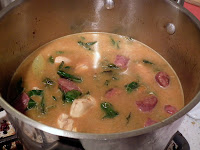 Then it was time to add the rice and water.  Then we just let it cook for about 30 minutes.  This gave the rice time to cook up, and for all the flavors to really get nice and complex and soaked up by the rice.  While the jambalaya cooked up, we also threw some honey hush corn bread in the oven.  You can find pictures and recap of the cornbread here.  Though this time we spiced it up a bit by adding a sprinkle of black pepper to the top.
In the end, we were left with a delicious bowl of food.  The andouille gave the jambalaya a nice smoky flavor that the rice soaked right up.   The only spice came from the cayenne and the sausage itself, so it wasn't too overpowering.  And the sweetness of the cornbread was a nice compliment to the dish.  Justin paired the meal with a Bell's Hopslam, which fit perfectly with the meal meshing nicely with the honey in the cornbread and the smokiness from the jambalaya. 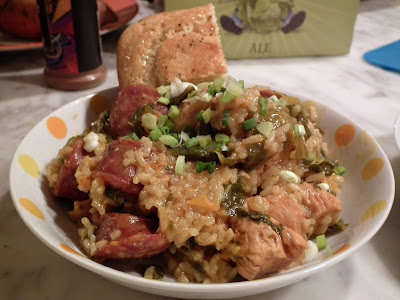 We hope you had a great Mardi Gras too, and don't worry, we won't be fasting, so get ready for more delicious meals to come!
Posted by Unknown at 10:34 PM