Don't Worry -- We Got Chimichurri!

We found ourselves with quite a bit of cilantro in the fridge, some from the last couple shares, and also from the grocery store, and we needed to figure out how to use it all.  We decided to put a spin on chimichurri, and rather than use parsley as the primary herb, we used cilantro.  Chimichurri is a traditional Argentinian condiment, much like pesto, used to top steaks.

So here we go...we started with the chimichurri, using this recipe as a base.  So cilantro was the star, but we balanced it out with some mint we'd picked up for the rutabaga, and some parsley we trimmed off our plant. 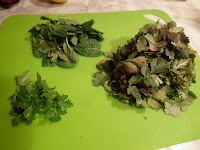 All of these guys went into the food processor with some garlic, red wine vinegar, olive oil, salt & pepper, and a touch of lemon zest.  It initially came out a bit acidic, so we added a little more cilantro and mint to balance things out.  Oh, and we threw in a dried red chili pepper for a touch of heat (Sorry there aren't more pictures!) 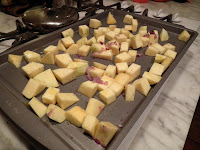 Next came the rutabaga.  It kind of looks like a giant turnip, but it has a slightly sweet taste to it.  We decided to roast the rutabaga, much like we roast our cauliflower, with a little red onion, mint, and pecorino (except the pecorino was at Justin's place...womp, womp!).  The rutabaga was peeled and diced.  Then we simply seasoned it with salt, pepper, grated red onion, a squeeze of lemon juice, and a drizzle of olive oil.  Into the oven they went to roast up.
While the rutabaga was roasting, we also threw the steak in.  We went with a London broil for our cut of meat.  With just a little salt, pepper, and olive oil, it went into the oven for about 5 minutes on each side. 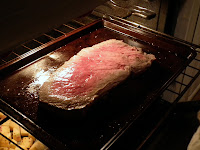 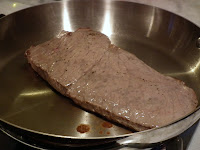 Then we transfered the meat to a pan on the stove top to get a nice sear on each side.  The meat sat in the pan for about 90 seconds on each side, and then we let it rest before slicing into.  The meat came out perfectly medium rare.

Once the meat was sliced up, we topped it with the chimichurri.  By the time the steak had finished cooking, the rutabaga was ready to go too.  We just tossed the mint with the rutabaga and plated it up! 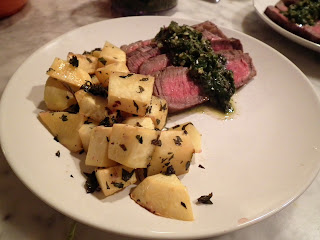 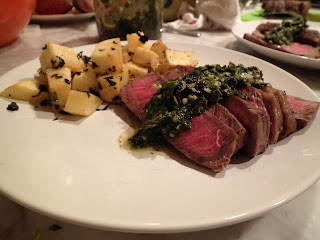