Growing up, did your parents try to get you to finish your meal because there were "starving kids in Africa" that could really use that food you were about to waste?  What about all the starving people right here in the US?  1 out of 5 kids in America are starving, and when you scale that to the entire population, 1 out of 6 Americans are starving.  People that use food stamps are only given $4 per person per day to supplement whatever food budget they have.  Just over a month ago, A Place at the Table, debuted in theaters, and became available On Demand and on iTunes.  It is a documentary by the same folks that produced Food Inc., and 3 families struggling with food insecurity.

We decided to put ourselves in their shoes for a day, and see just what $8 (since there's 2 of us) could get us for breakfast lunch and dinner.  As you can see, it didn't buy us much.  All we could afford was a half dozen eggs, some sirloin tips, and a bag of frozen veggies. 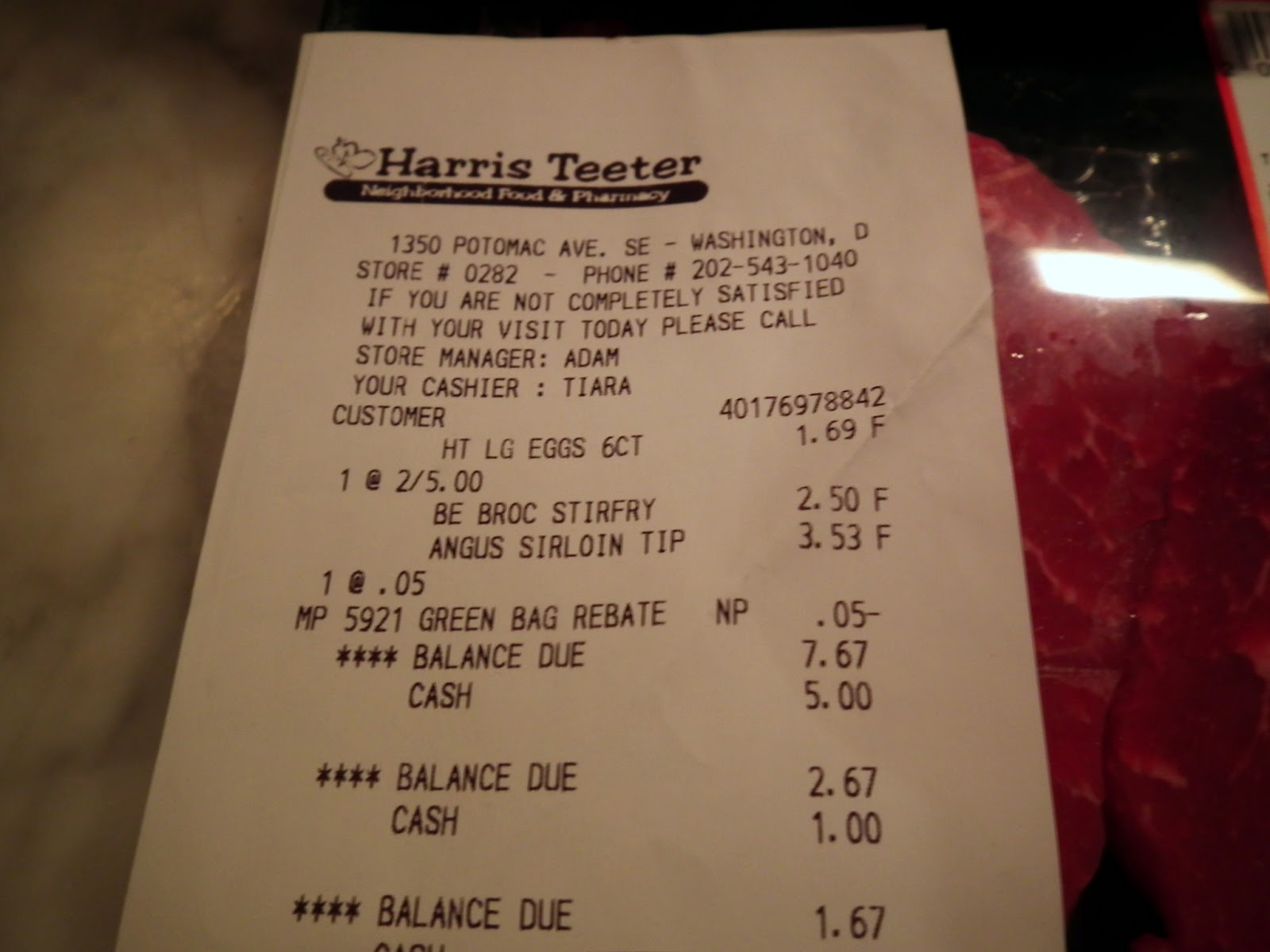 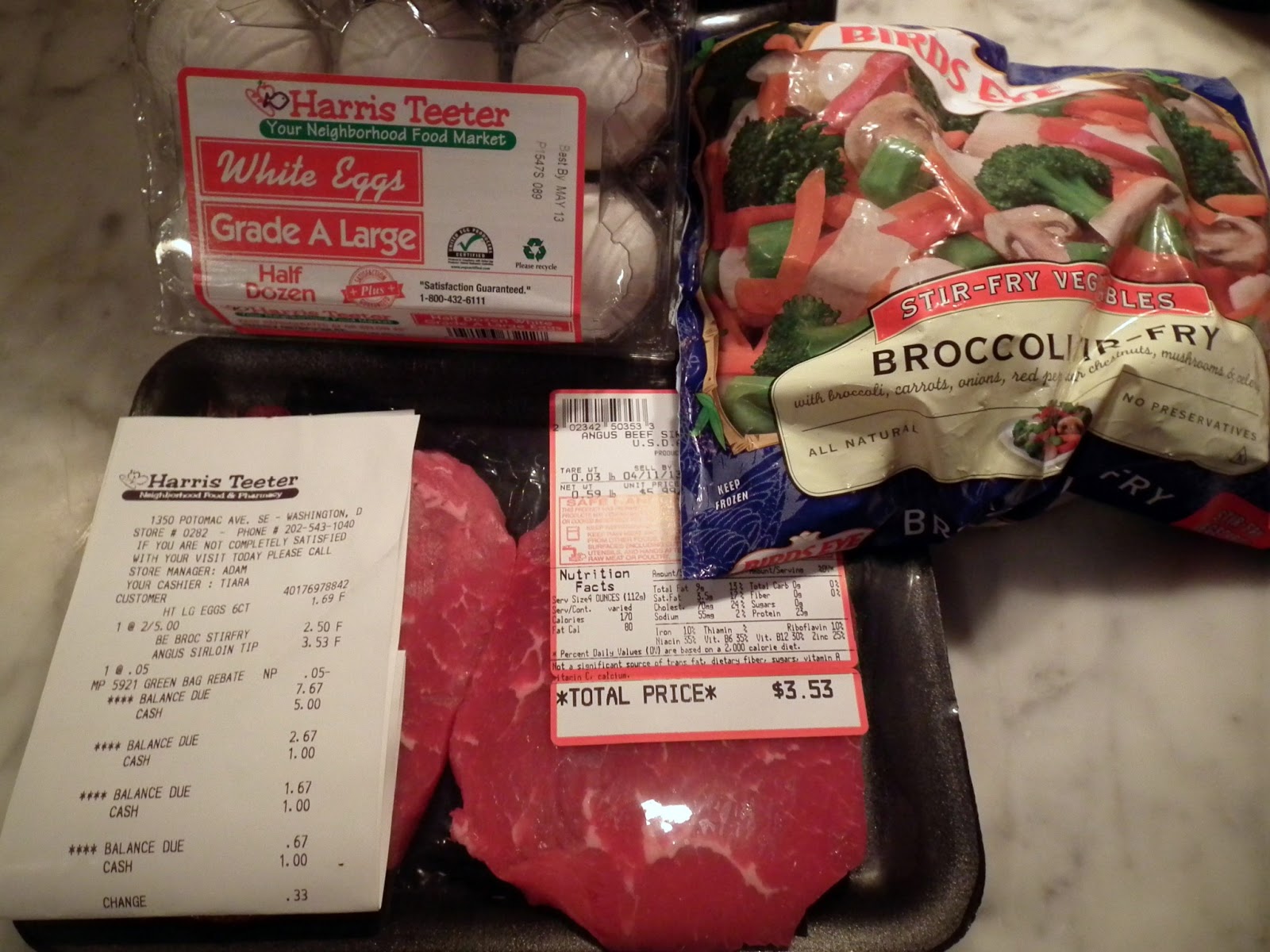 The eggs can be used for breakfast, and we'll use the steak and veggies for a stir-fry for dinner, but as you can see, there was nothing for lunch.  Frozen veggies are a great, healthy alternative to buying fresh vegetables however, about a third of the options, when it came to mixed veggies, had a sauce.  Nutritionally, that's where you run into trouble because you have no control over the salt, sugar and fat content.  So even just finding a bag of plain, mixed veggies that fit our budget was tough. 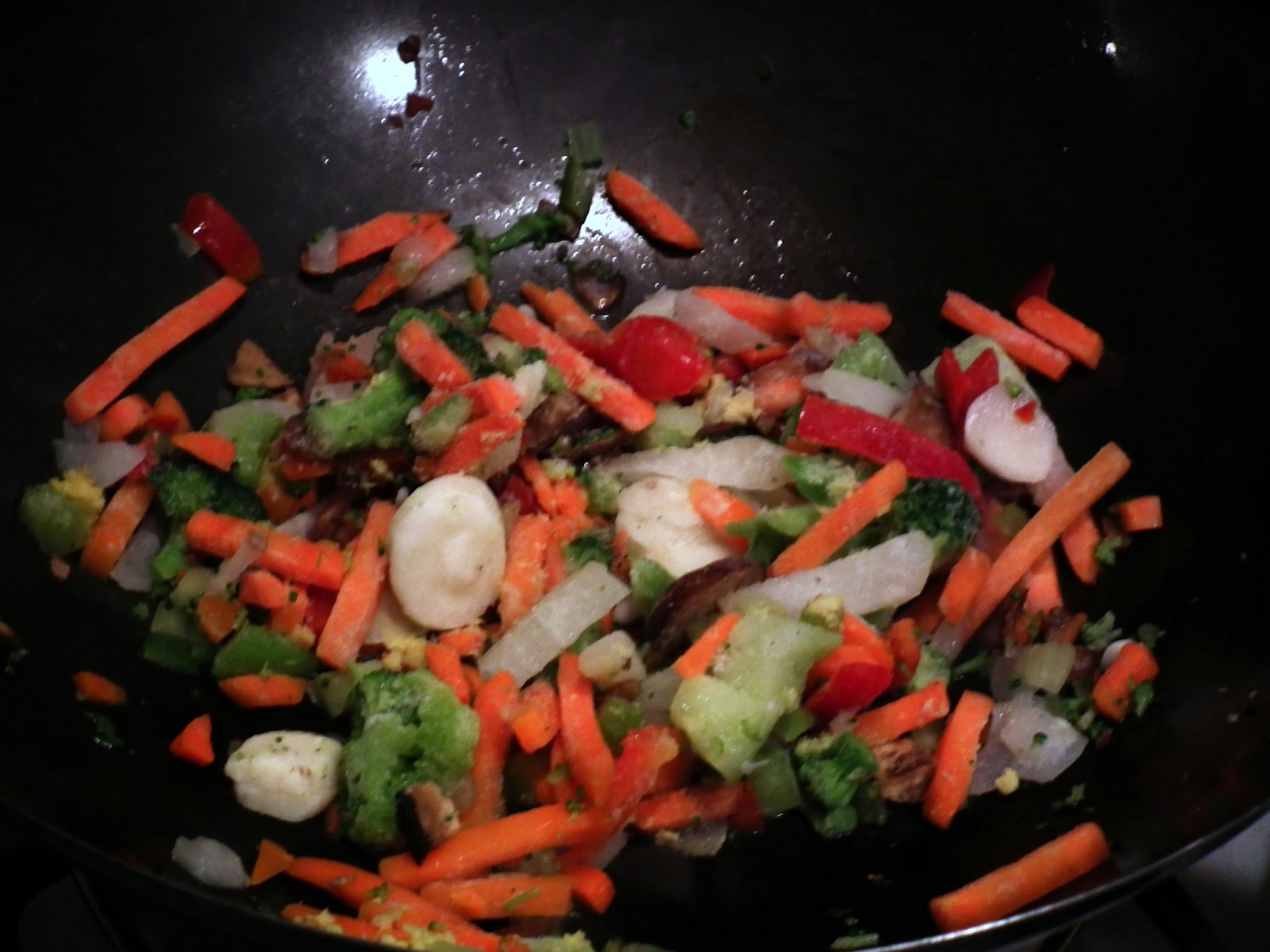 The stir fry itself was easy to throw together.  Since the veggies were frozen, we threw those into the wok with some coconut oil and grated ginger.  Most people probably don't have that on hand, but you can use canola/vegetable/grapeseed...whatever oil you have on hand. 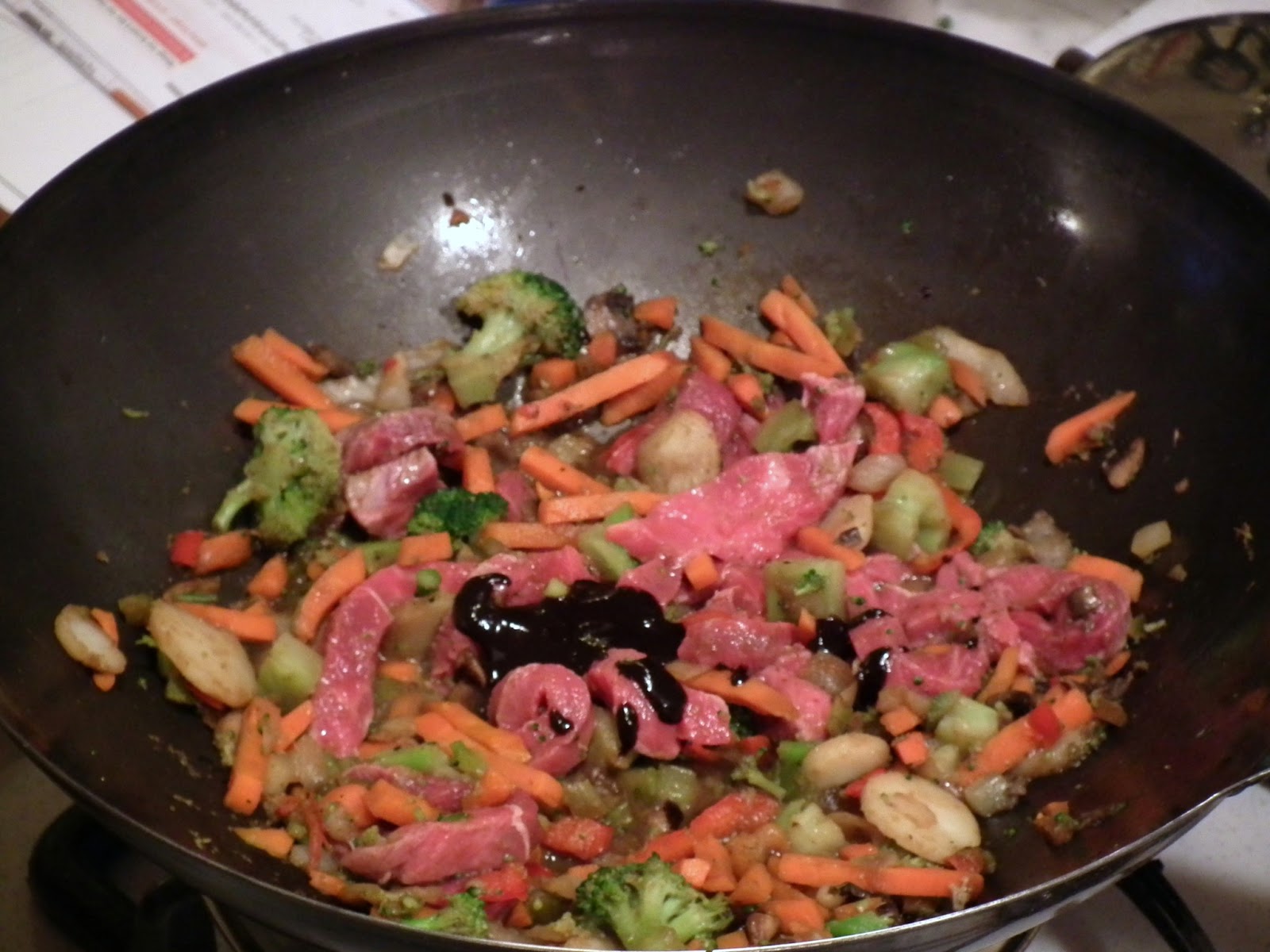 Once they had defrosted a bit, we threw in the steak, which we'd cut into strips.  We also added some black bean & garlic sauce that we already had on hand.  Again, this probably isn't a "staple" item that most people have in their pantries, but you can add garlic and soy sauce, or whatever other sauce you have on hand.

That's the nice thing about stir fry...there really aren't any rules when it comes to them.  You can just throw together whatever you have on hand to make a tasty dish.  Because we had a tiny bit of our homemade kimchi left in the fridge, we chopped it up and added it to the mix for some added spice.  An alternative would to be to use a little cayenne pepper or hot sauce.  We topped off each dish with some sesame seeds. 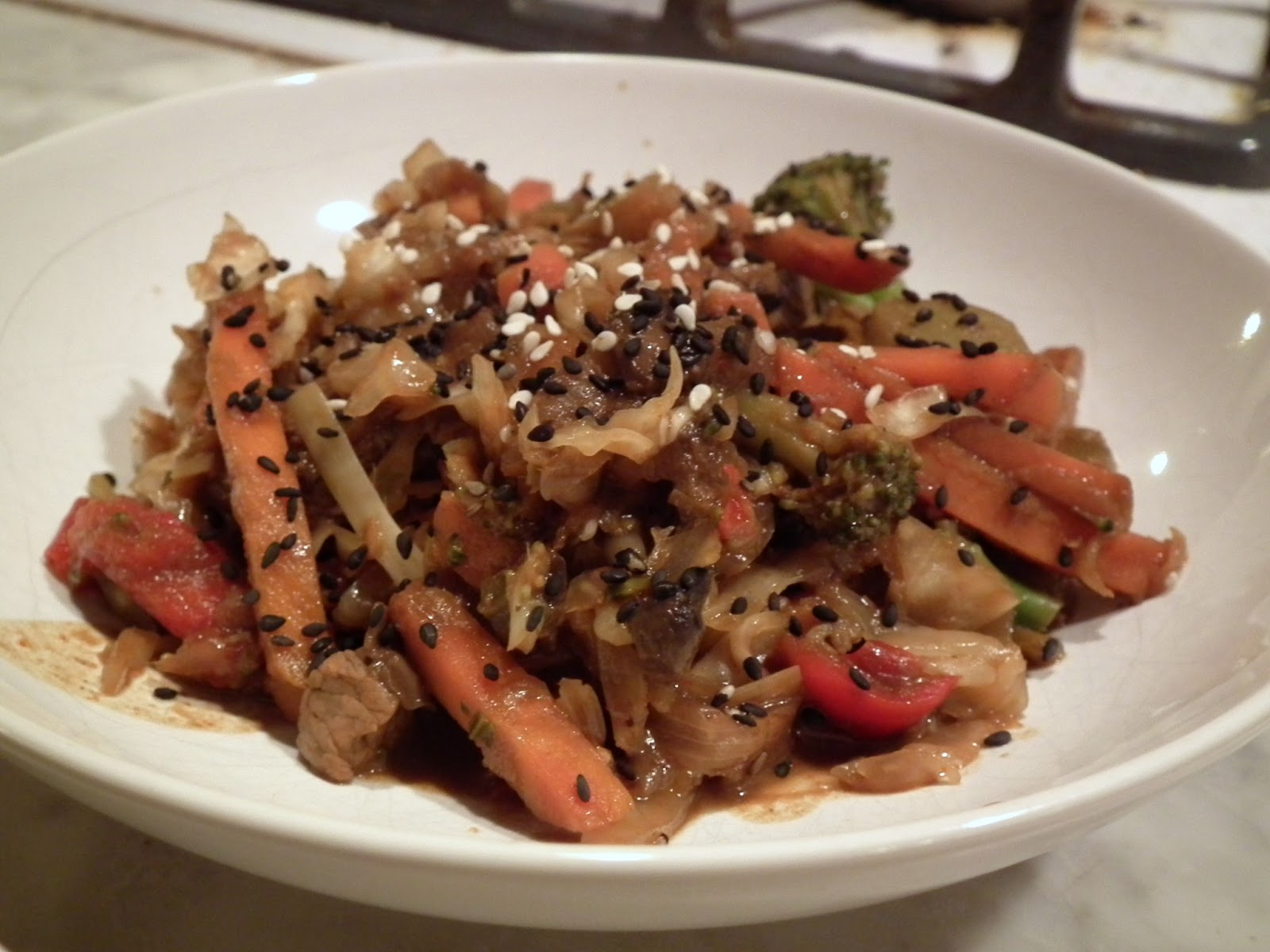 Now granted, our little experiment was a bit skewed since we used items we had on hand that may not be considered "staples" in most households, and we were trying to buy food for just one day.  Had we taken advantage of our economies of scale, and bought food for an entire week with $56, we probably could've found creative ways to make 3 meals a day.  There were whole rotisserie chickens on sale for about $4, which could be stretched to last at least 2 meals.  Cans of tuna and sardines were on sale for $1 each too.  But as you can see, your money doesn't stretch very far unless you have the time to be one of those extreme couponers.  And with sequestration, there will be less and less food assistance available.

So, here's what you can do to help.  Take a minute to complete this form and send a letter to your congressmen, urging them to protect federal nutrition programs.  Take a couple hours out of your day to watch A Place at the Table.  I'll get you started with the trailer...

This was a really enlightening experience. We are so used to cooking for fun and making creative use of a seemingly endless choice of ingredients.  Knowing we had an $8 budget for the day when we passed ads for $3 for 2 breakfast sandwiches at a fast food chain (that will remain anonymous) really showed us how much easier it would've been to just grab 2 sandwiches than to shop and cook on that tight budget.  It's understandable to see why people would just resort to the $1 menu at fast food joints. But with a little creativity, and some patience shopping around the grocery store, you can put together a healthy meal on any budget.
Posted by Unknown at 6:58 AM

Email ThisBlogThis!Share to TwitterShare to FacebookShare to Pinterest
Labels: A Place at the Table, Share Our Strength, starving, steak, stir fry, The Giving Table