Pumpkin--get in everything I eat from October 1st til Thanksgiving!!!

This time of year, pumpkin seems to be everywhere...lattes, pies, soups, breads...you name it, there's a version with pumpkin.  We decided to take our little sugar pumpkin, and turn him into some delicious ice cream sundaes! 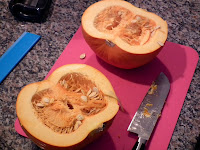 You'll want to start by making your pumpkin puree.  Cut your pumpkin in half and clean out all the guts.  I like to save the seeds so I can toast them up for a snack.  So if you want to do that, put the seeds in a bowl, and toss all the stringy guts.

Once the insides are nice and clean, place the halves on a baking sheet, cut side down.  You'll also want to put some water in your pan so it can steam the pumpkin.  Make sure water gets underneath your pumpkin as well.  Pop 'em in a 400 degree oven, and let them roast for about 20 minutes.  When you pull them out, they should be nice and soft. 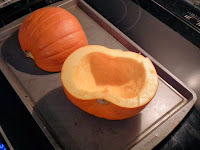 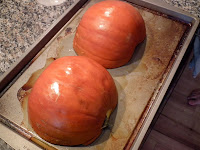 Once they're cool enough to handle, scrape out the insides into a bowl.  The meat should easily pull away from the skin.  Then we just used the immersion blender to make a silky smooth puree. 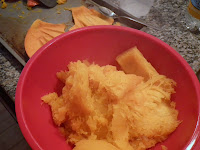 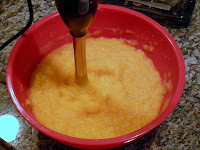 For the ice cream base, we used the same recipe for the base that we used in our 100th post.  We made about half of the recipe, and added in a cinnamon stick and a few cloves, and used a vanilla bean, rather than vanilla extract. 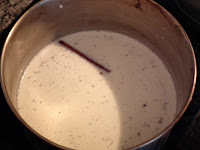 While the cream was simmering, and the spices steeping, you'll want to whip up your egg yolks and sugar. 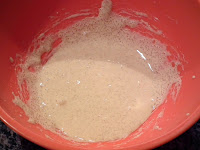 Once the cream mixture came to a simmer, we removed the cinnamon stick and cloves, and tempered it into the egg yolks and sugar mixture.  Then we added about 1 cup of the pumpkin puree. 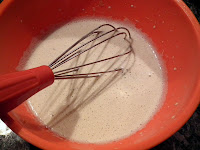 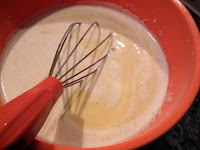 That's it!  Your base is ready.  You can just follow the directions on your ice cream maker, and you'll have pumpkin ice cream in no time! 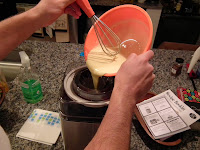 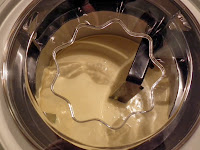 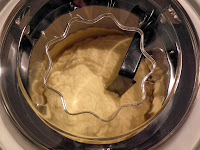 Once our ice cream was churned to our liking, we removed it from the ice cream maker, and stored it in the freezer while we made our sundae toppings. 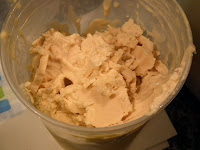 We toasted up some pepitas to top our sundaes, in place of nuts. 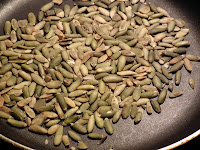 And Justin got to work making some caramel.  Start by melting some sugar in a pan.  We used a combination of raw sugar and brown sugar. 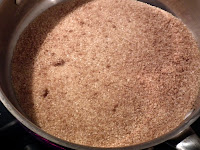 Once your sugar has melted, add in some butter. 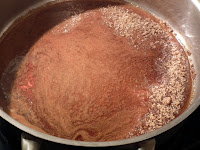 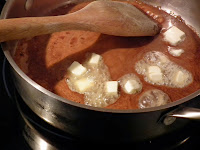 Then add in some cream.  Be sure you continue to stir it so your caramel doesn't burn. 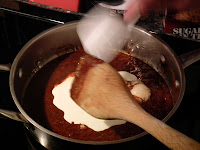 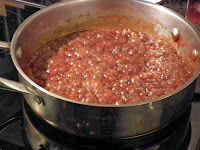 Once it's thickened, you're ready to go!  You may want to let it cool a little bit before topping your sundae.

Now, just build your sundae.  We had some leftover maple whipped cream, so we put a dollop on top of our ice cream.  Then sprinkled on the toasted pepitas and caramel. 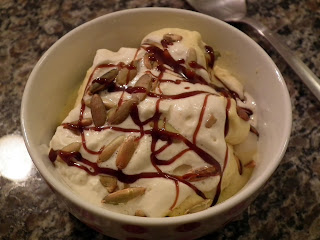 It was the perfect Fall dessert!  Look for more posts that pumpkin up the volume coming soon.
Posted by Unknown at 7:24 PM