We're both big fans of burgers, and we thought it was about time we try our hand at making some brioche buns to go with our summer cook-out favorites.  You know by now that we're not into baking as much as we are cooking, but if we're ever going to improve so we have a shot at winning MasterChef, we need to practice!  You can't discount the importance of the bun to a good burger.  While some opt for potato, kaiser, or Portuguese rolls, nothing really makes a burger like a light, airy, malty, perfectly browned brioche bun. 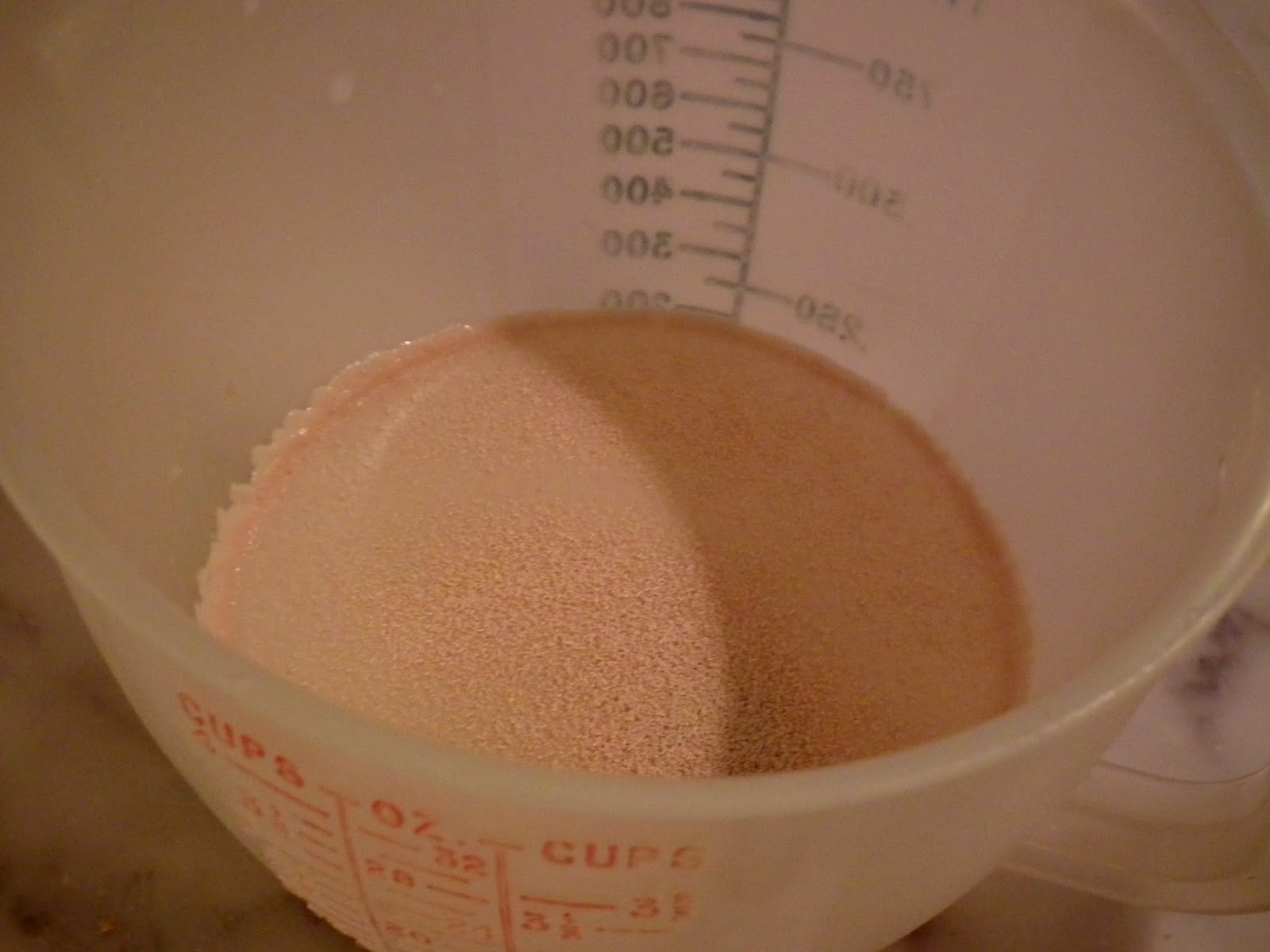 We found this recipe online, and since we'd had some success with Smitten Kitchen recipes in the past, we knew she wouldn't steer us wrong.  Start by mixing together warm water, milk, yeast and sugar, and let it stand for about 5 minutes.  The warm water helps activate the yeast, while the sugar acts as food for it.  After about 5 minutes, this mixture will be foamy, and ready to mix into your dough.

While your yeast is standing, you can start to mix your dough.  For the dry ingredients, whisk together your bread flour, all-purpose flour, and salt.  Rub the butter between your fingers, and mix with the flour mixture, forming crumbs.  Ours didn't really form crumbs, per se, but once the butter was incorporated as much as it could be, we added the yeast mixture and a beaten egg. 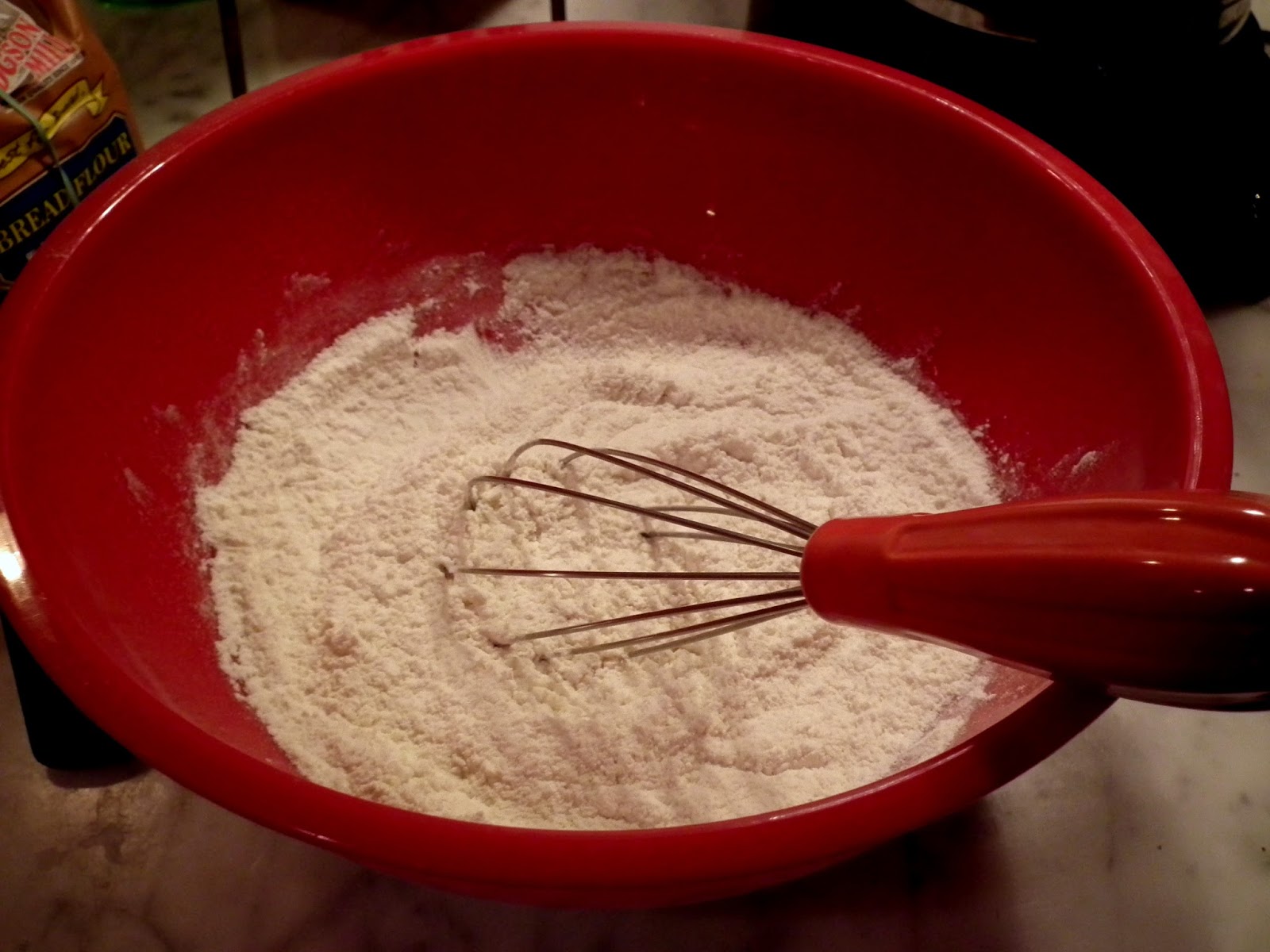 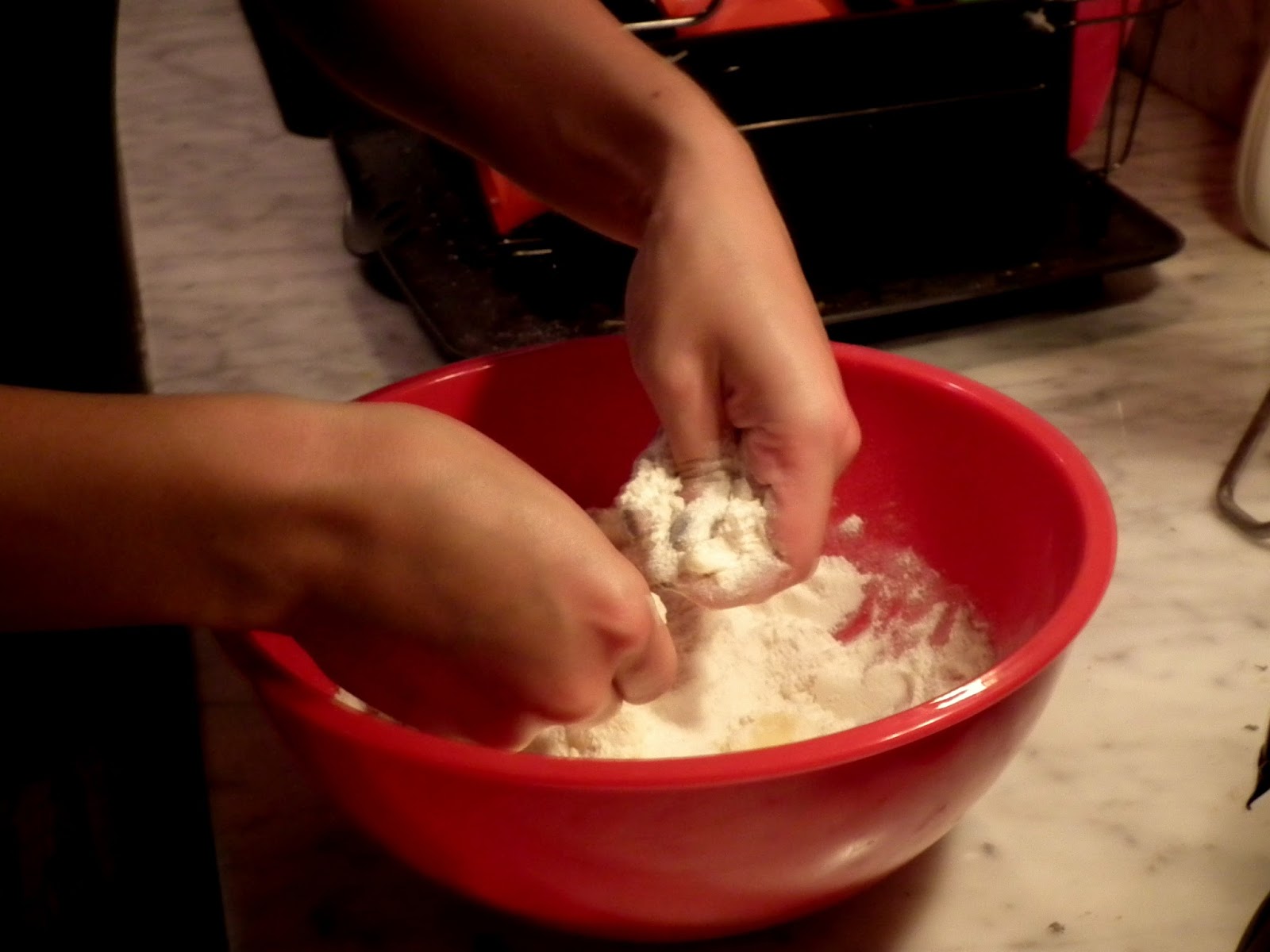 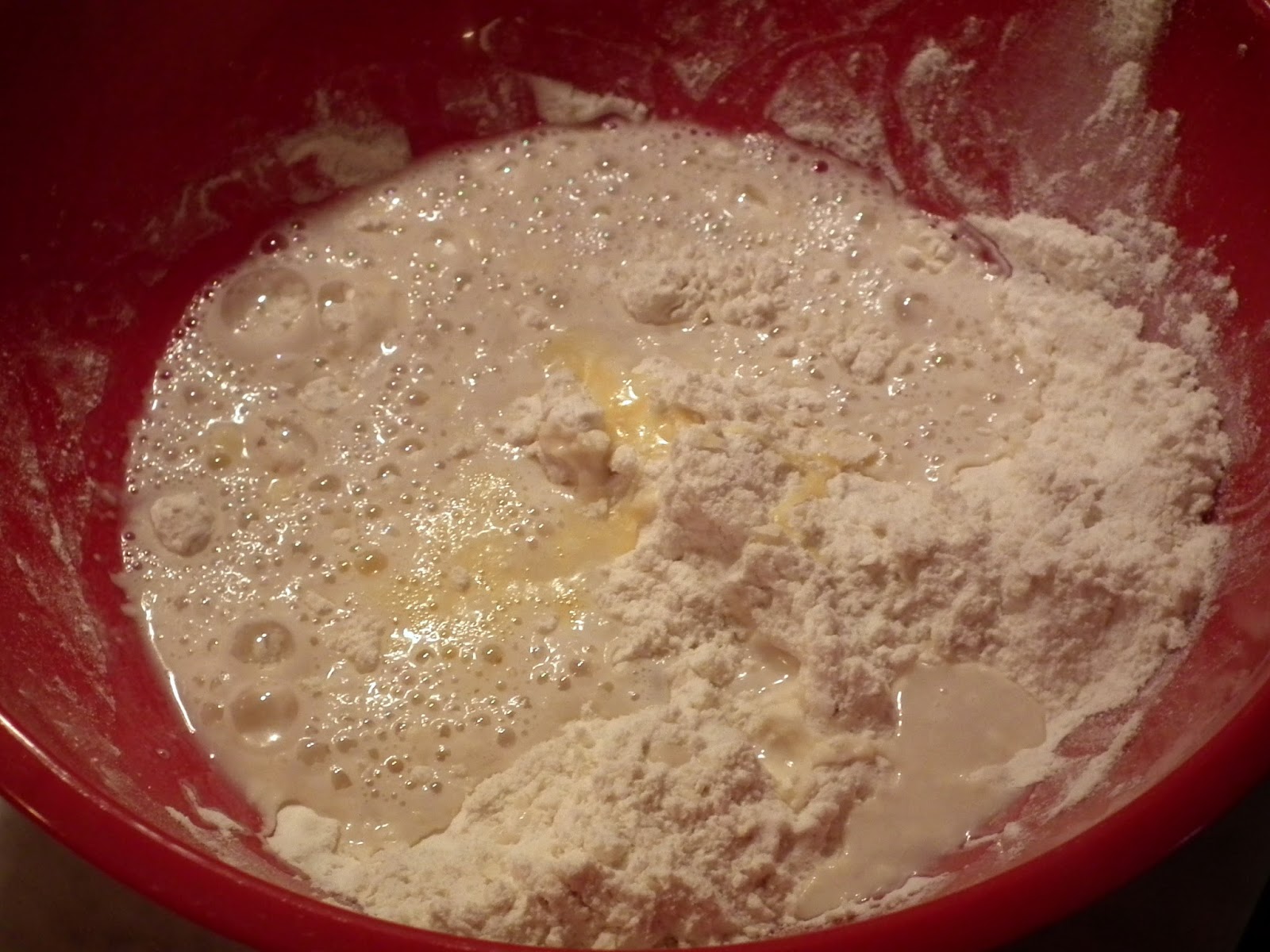 We don't have a dough scraper, so we just used a rubber spatula to mix the wet and dry ingredients together.  Within minutes, we had a nice ball of dough. 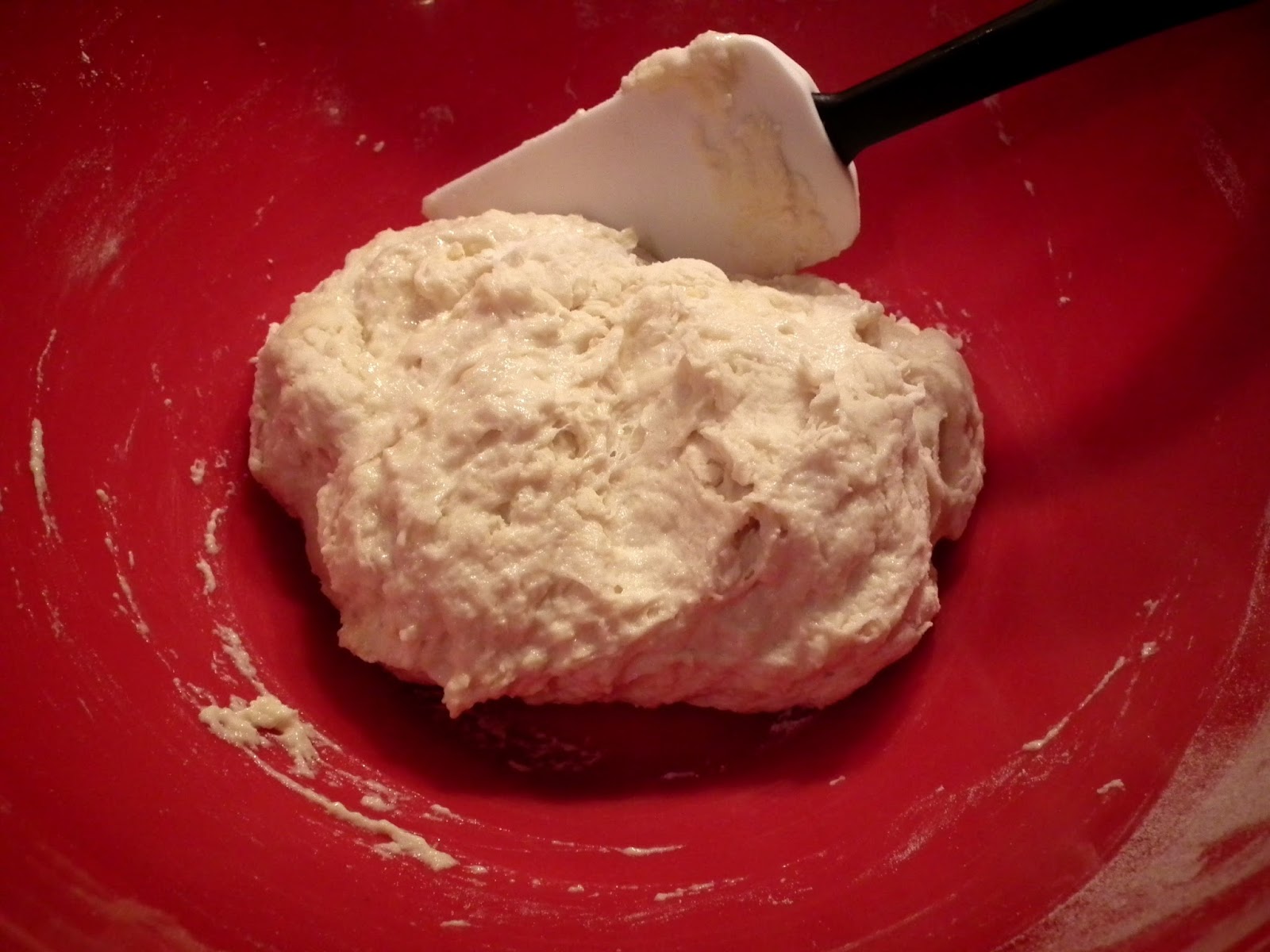 Here's where some of the manual labor comes into play.  On a floured surface, you'll have to knead your dough.  We followed the recipe, which suggested using a scooping/slapping method.  You scoop your dough up from the counter and then slap it down.  In 8-10 minutes, it should be smooth and elastic.  Be careful not to add too much flour to the dough, as this will leave you with tougher buns.  Our dough was a bit tackier than it probably should've been, but we didn't want tough buns.  Once you've kneaded your dough, place it back in the bowl, cover with plastic wrap, and let it rise until it doubles in size.  This took about an hour for us. 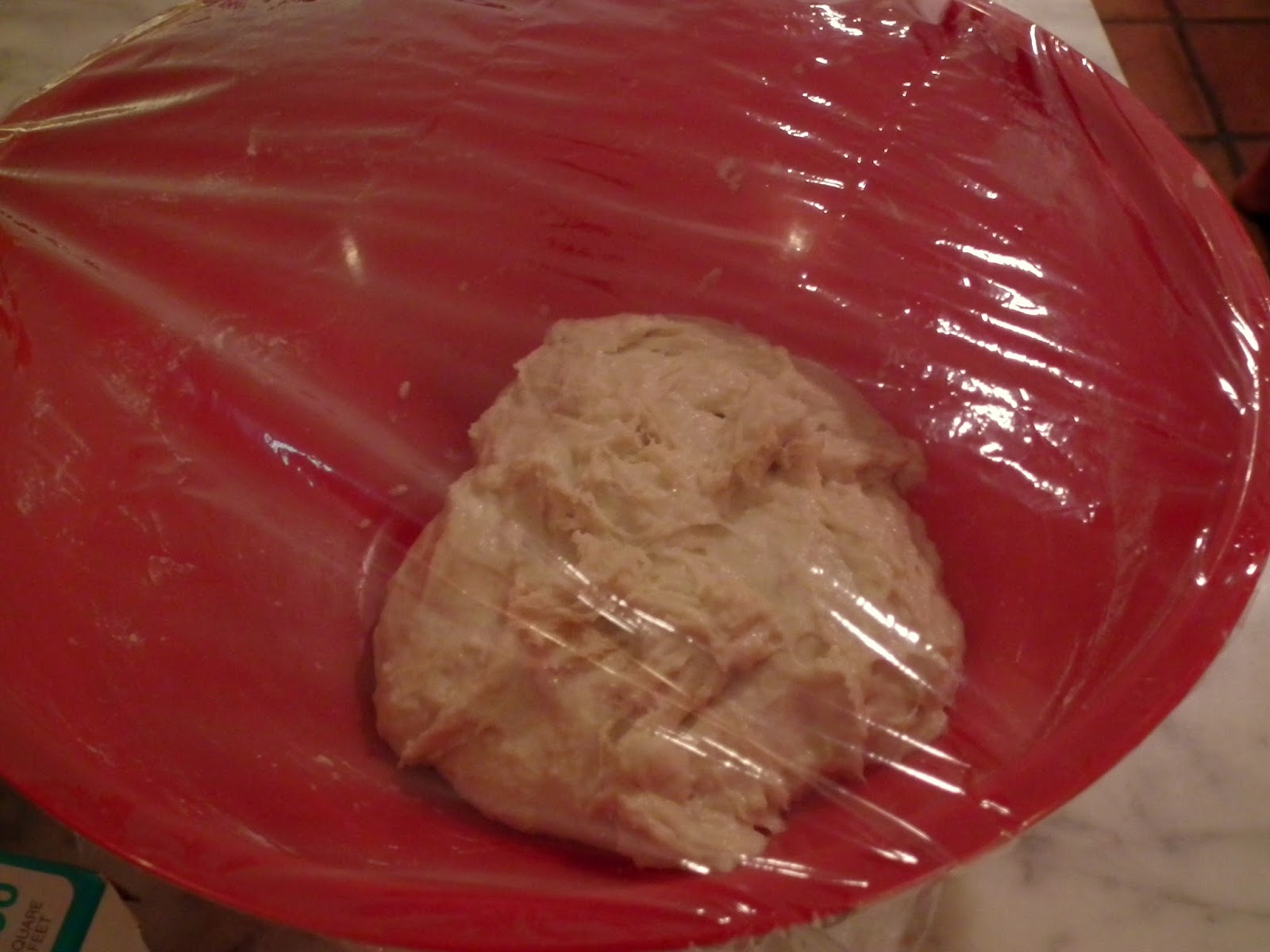 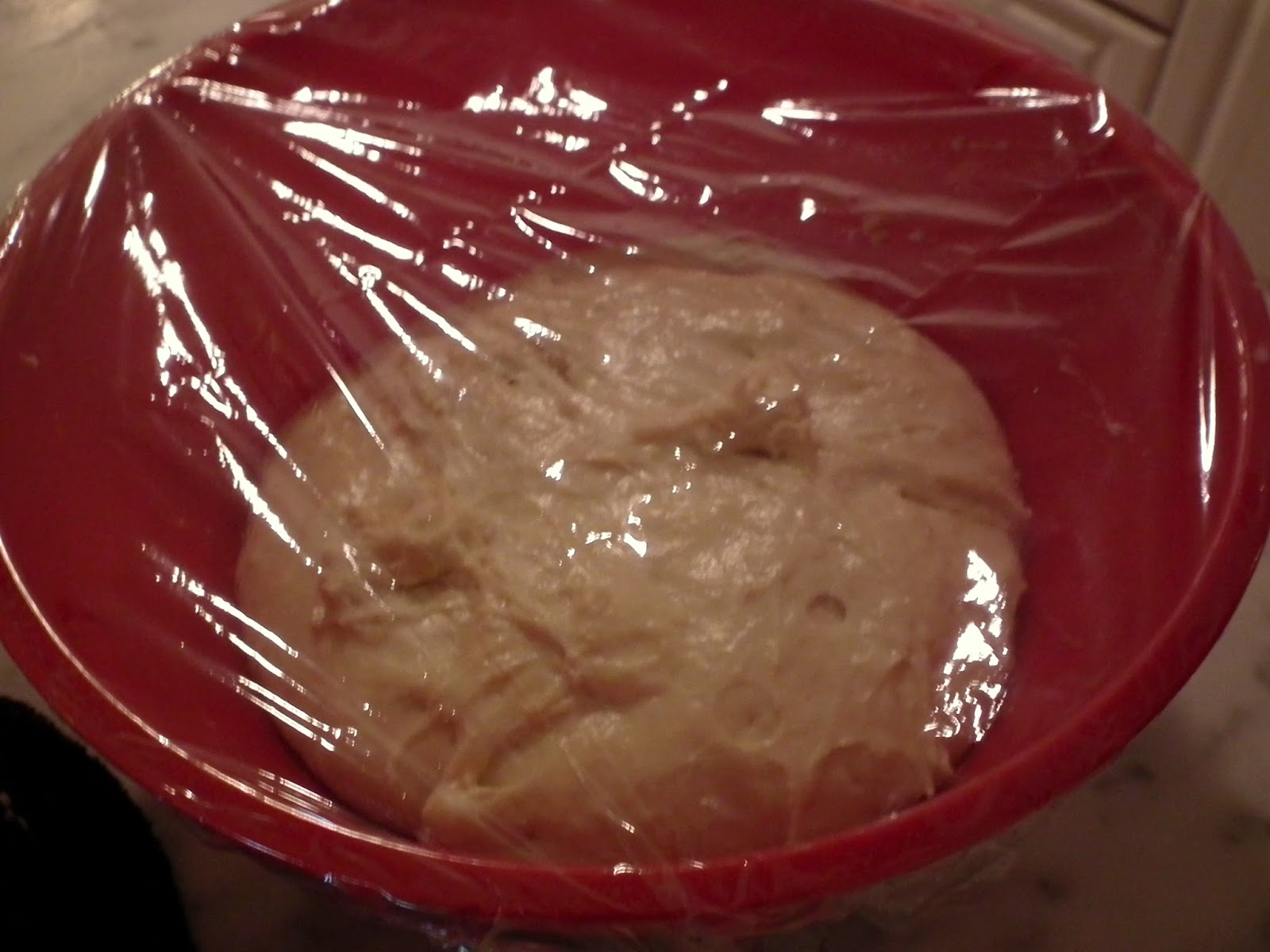 Once your dough has risen, divide it into 8 sections.  We only made half the recipe, so we ended up with 4 buns.  Roll them into balls, and place on a baking sheet lined with parchment paper.  Spray some plastic wrap with some nonstick spray and loosely cover your buns to let them rise again.  We didn't have any nonstick spray on hand, so I just brushed a little vegetable oil on it. 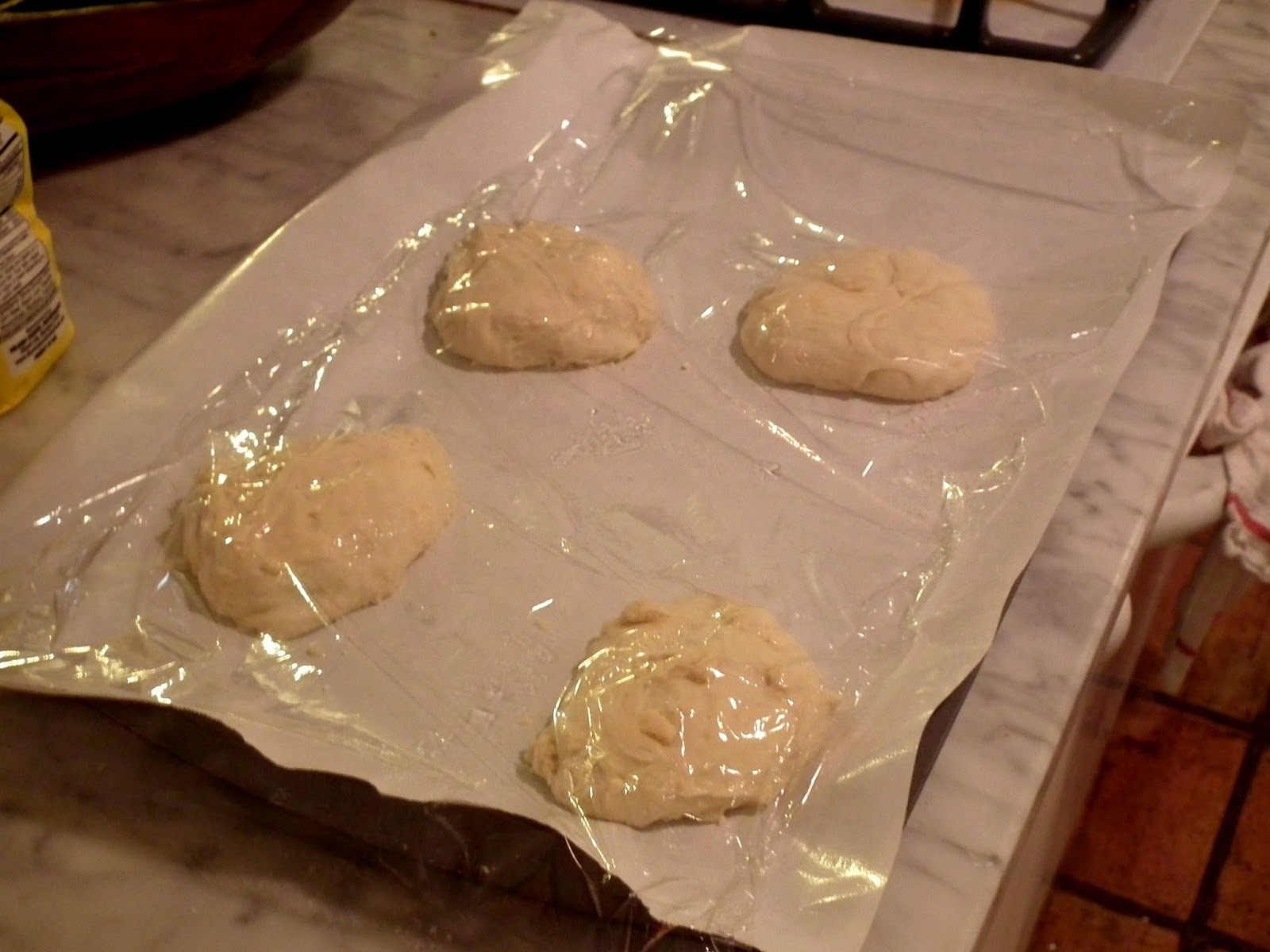 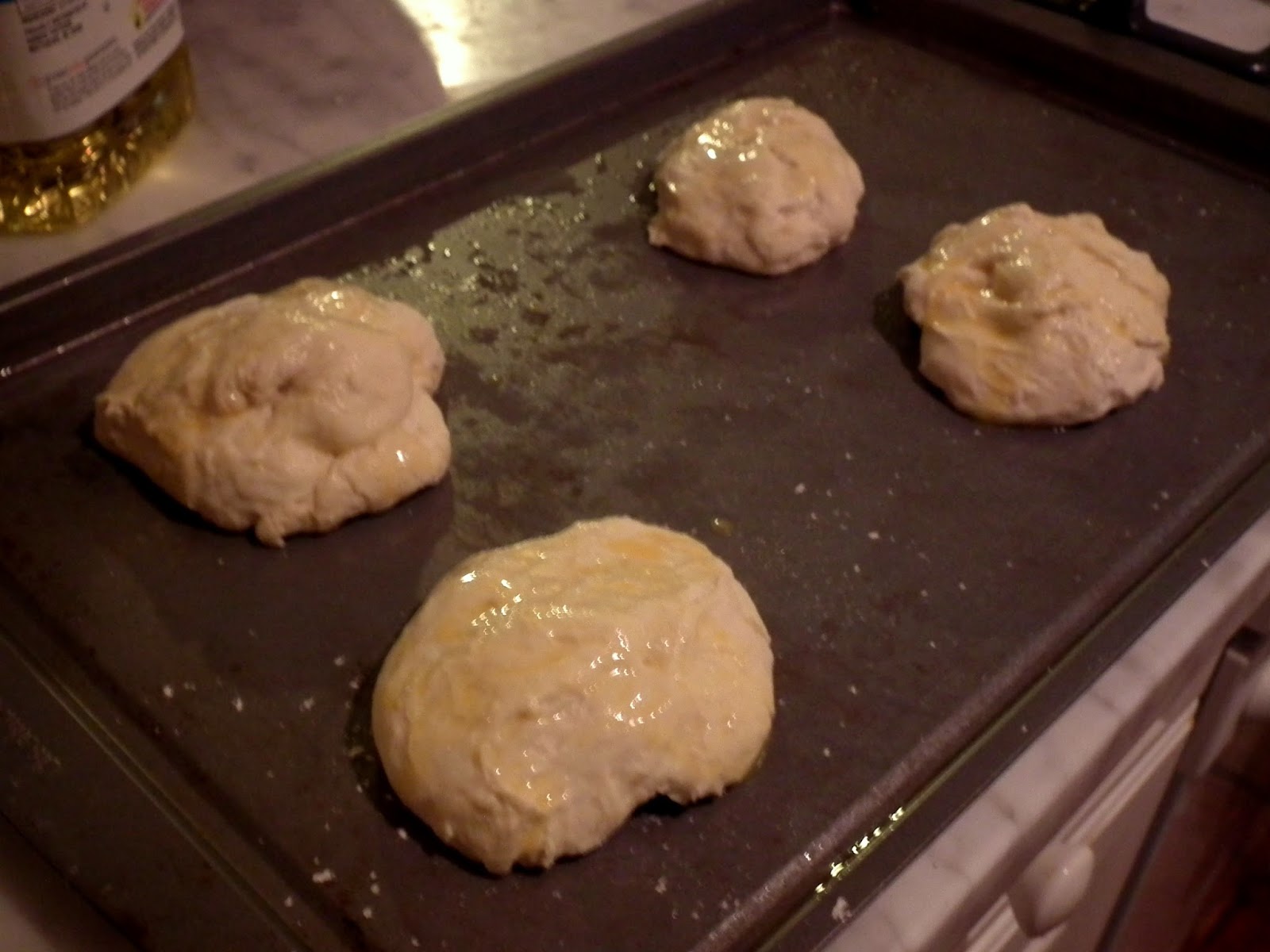 Like I mentioned earlier, our dough was still fairly tacky, so it was a bit difficult to roll them into balls.  Instead we shaped them as best we could, and let them rise again.  When you're ready to bake, place a dish of water in the bottom of your oven, and heat the oven to 400 degrees.  Beat another egg and brush it on top of each bun, and if you want to add sesame seeds, do that now.  Pop 'em in the oven, and let them cook for about 15 minutes, or until golden brown, turning the pan about halfway through. 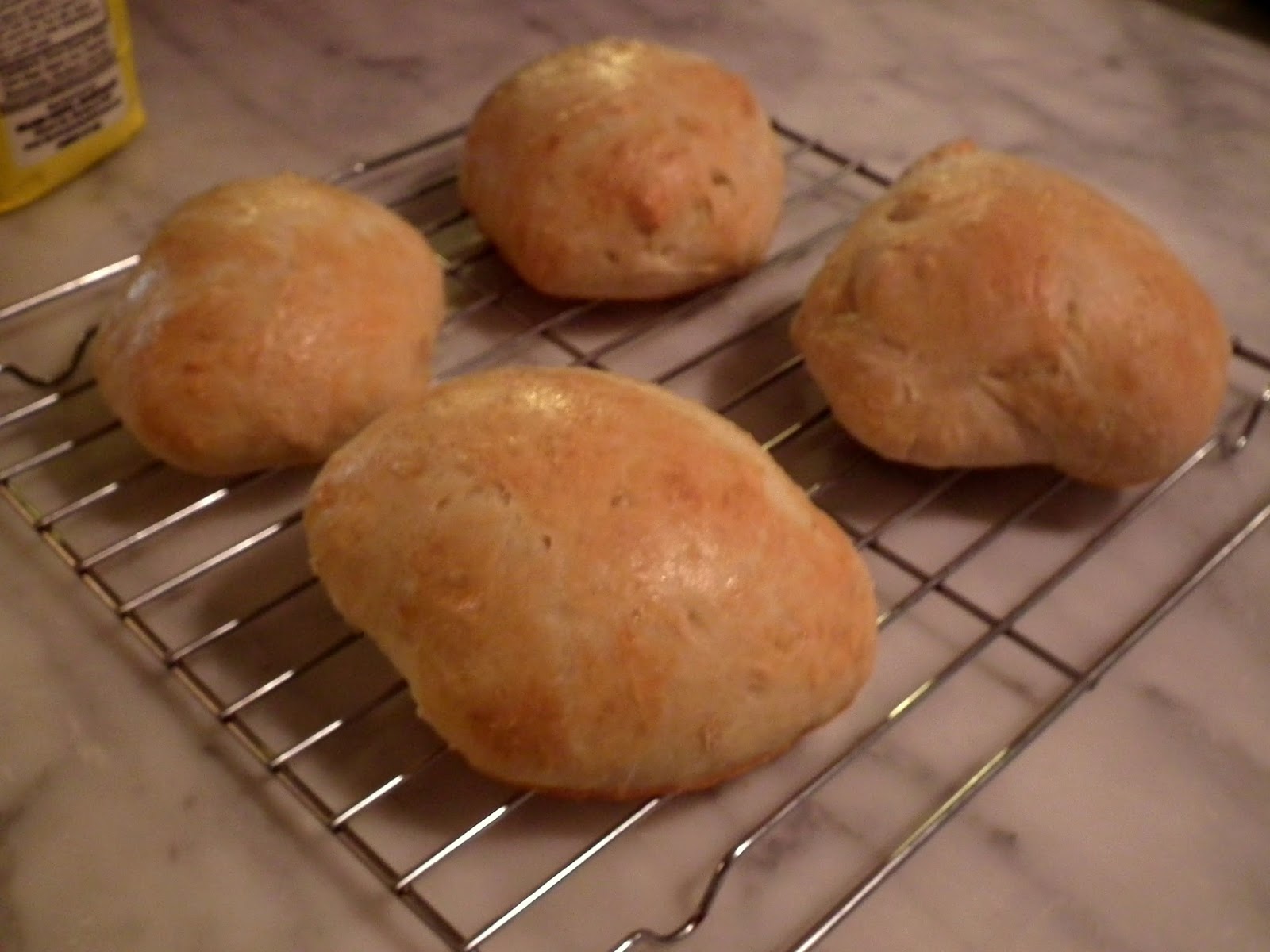 And voila!  Golden brown buns!  Let them cool completely before you cut into them.  At first, they seemed kind of tough on the outside, but once they cooled, and we cut into them, they were pretty light and fluffy on the inside.

For our burgers, we used Polyface Farms ground beef from our share, and simply seasoned them with salt and pepper.  We had some humboldt fog leftover from our grilled cheeses, that got nice and melty on the warm, grilled burgers.  We also caramelized some onions with port wine that topped the patties, along with some fresh arugula.  Add one of our dill pickles, and we had the perfect burger. 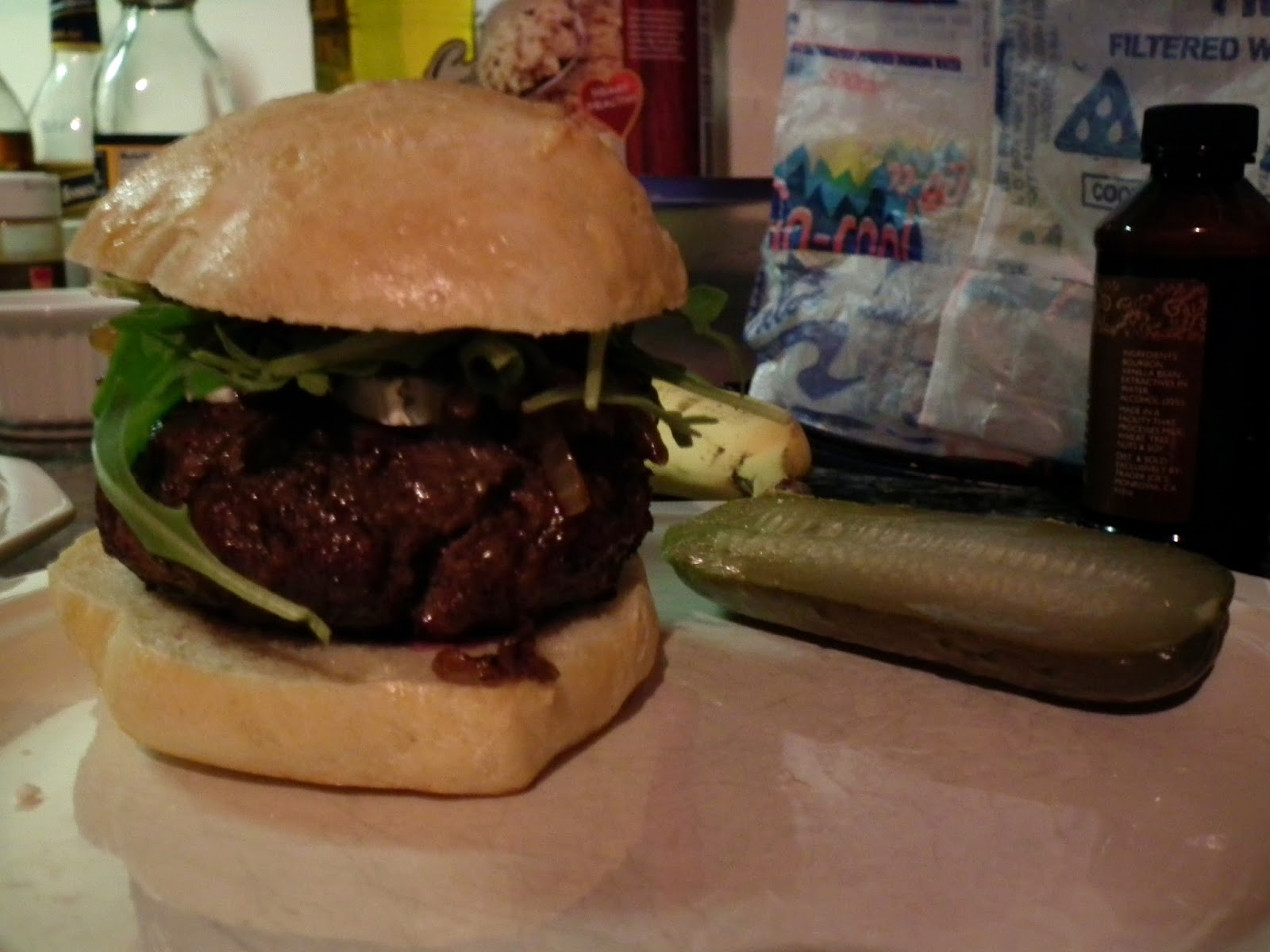