Despite having shelves of cookbooks and cooking magazines, we rarely take the time to flip through them and try out a recipe.  But last night, we did just that.  This summer we've gotten a watermelon in every share and we were running out of ideas (watermelon is to summer as cabbage is to winter in the CSA world).  Justin had actually already spent an afternoon thumbing through Eat With Your Hands, flagging the recipes that piqued his interest, including a crispy pork belly and watermelon salad.  It's not the first combination that comes to mind when I think of watermelon or pork belly, but let me tell ya...it's ridiculously good.

You'll want to start by pickling your rinds since they need to sit in the pickling juice for at least an hour.  You can also do this up to 2 days in advance. Start by mixing your liquid:
2 c. rice vinegar (we only have about 1.5 c. rice vinegar, so we used white vinegar for the remainder)
3 shallots, thinly sliced (we only used 2, since ours were pretty big)
2 Thai bird chilies, thinly sliced (we used jalepenos instead)
2 fresh Kaffir lime leaves (we found ours at Whole Foods, but Asian markets have them too)
2 inches ginger, peeled and sliced
1.25 oz palm sugar or 1 round gula jawa or 2 tbsp light brown sugar
1 tbsp koser salt 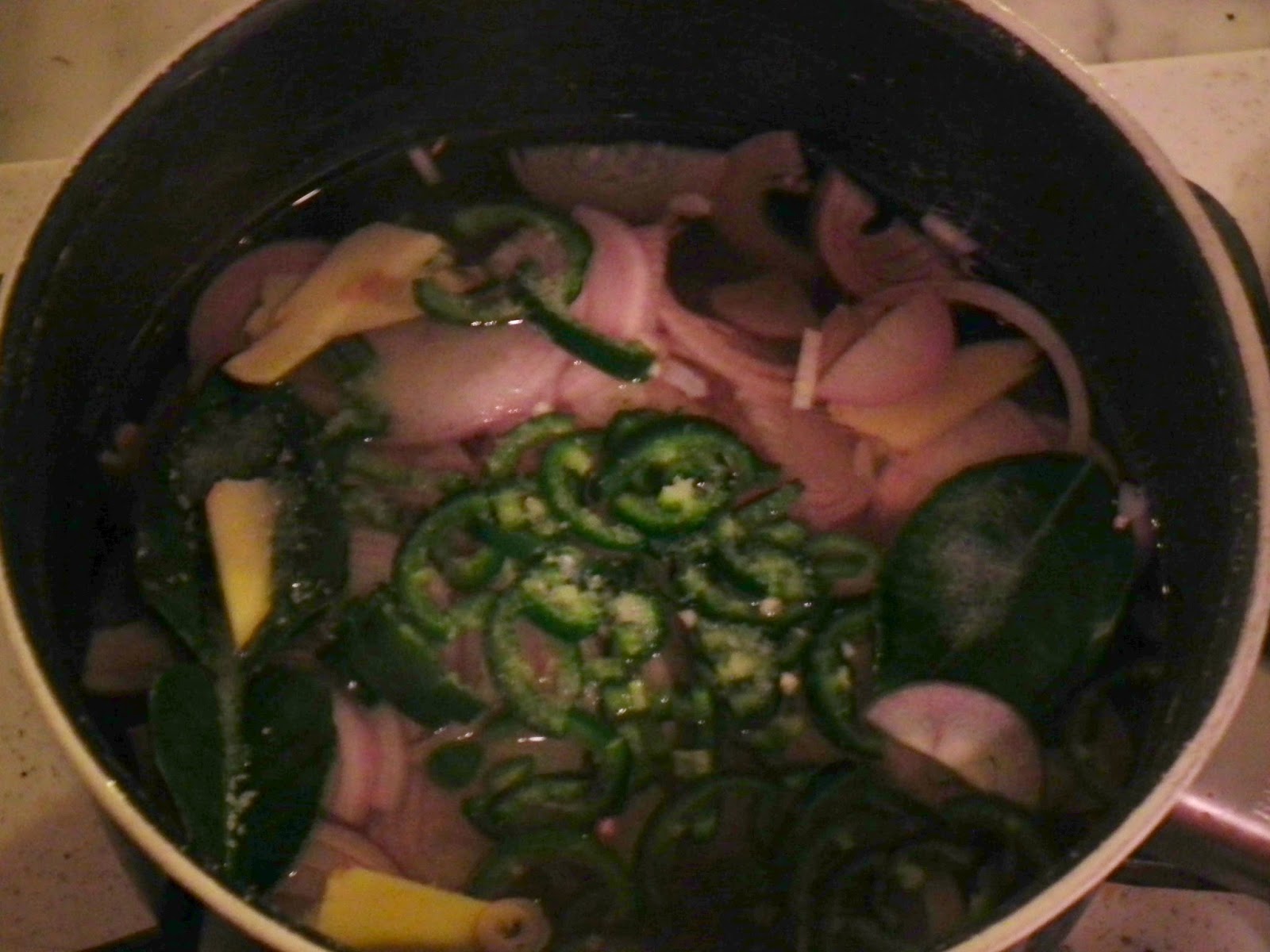 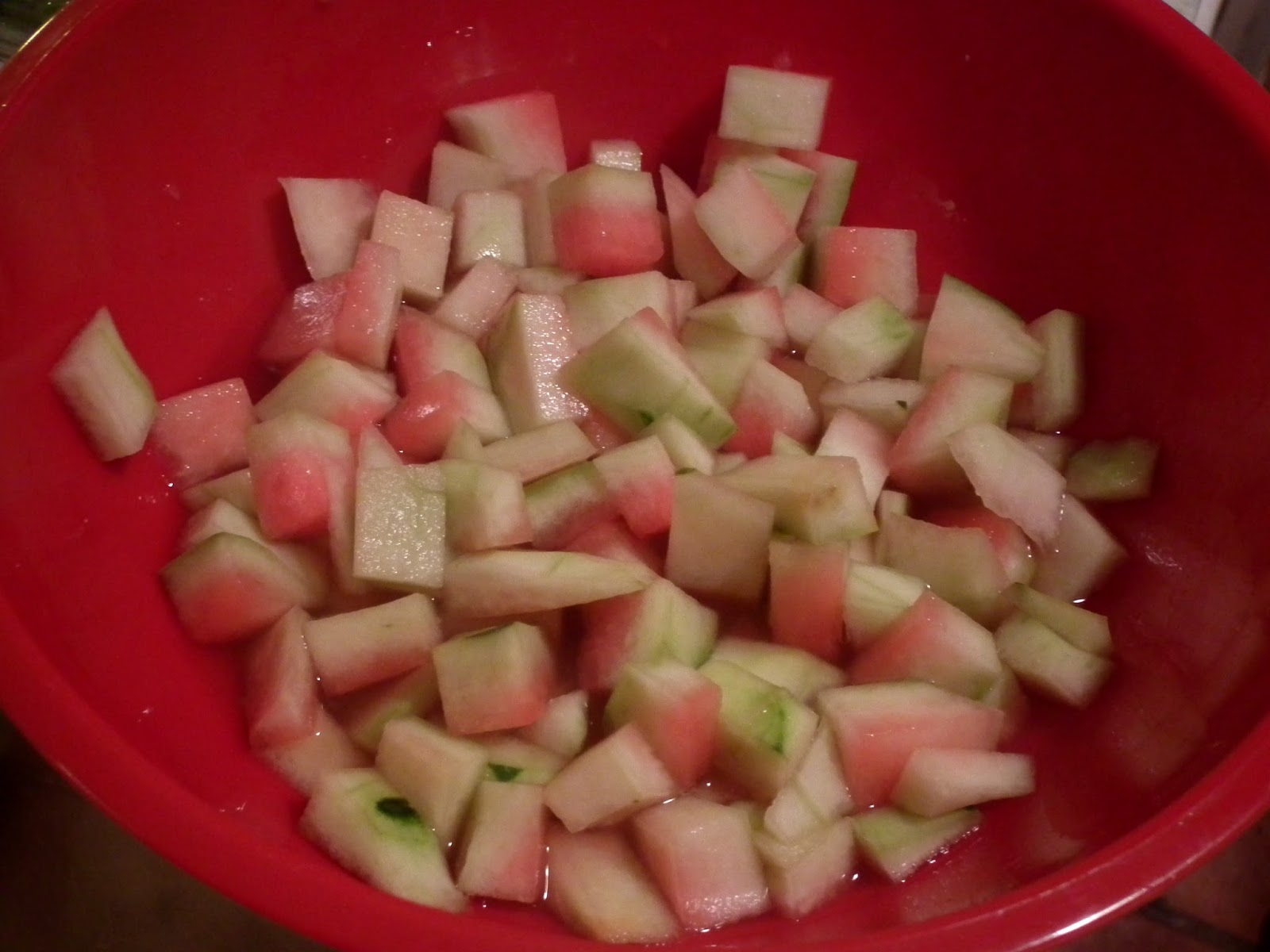 Combine everything in a saucepan and bring it to a boil.  All the flavors of the lime leaves, ginger, shallots and peppers will steep into the vinegar and sugar as it cooks.  The sugar adds a much needed sweetness to help cut the tanginess of the vinegar.  While your liquid is warming up, you can start slicing your rind.  You'll want to cut the flesh of the watermelon away from the rind, and also remove the tougher, dark green skin, so that all your left with is the fleshy white part.  You'll cut the rinds into cubes, and once your pickling liquid has come to a boil, and the sugar has dissolved, strain the liquid over your rinds.  They can go into the fridge while you prepare everything else.  You'll also want to cut the flesh of the watermelon into cubes, which can also go into the fridge to stay chilled until you're ready to serve it.

Now for the pork belly.  The recipe tells you to fry your pork, but we decided to just render out the fat and braise it in my dutch oven.  Just cut it into 1-inch chunks, and drop 'em in the dutch oven.  We had about 1 1/3 pounds of pork belly, and it took 20-25 minutes for it all to render down and crisp up. 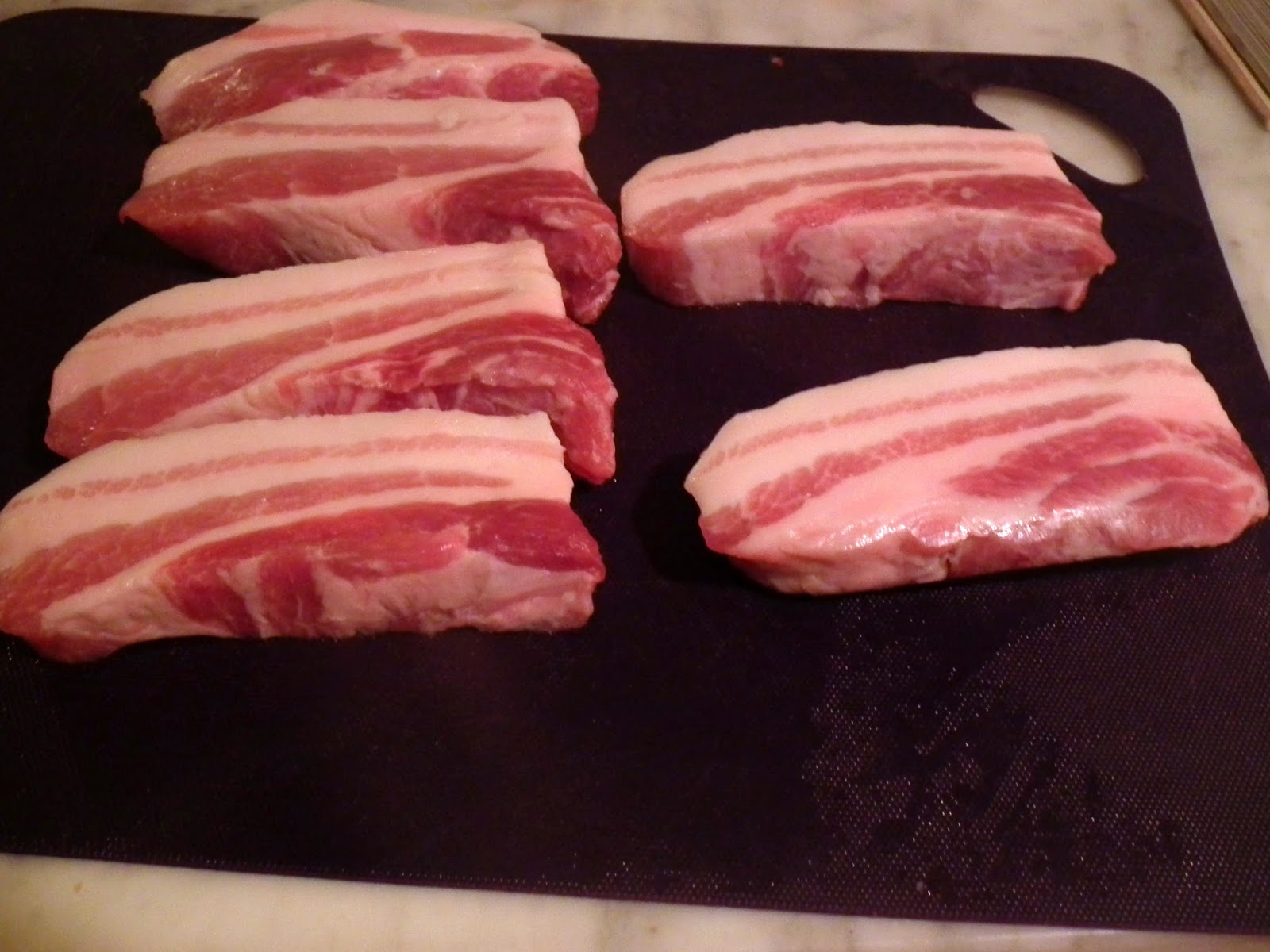 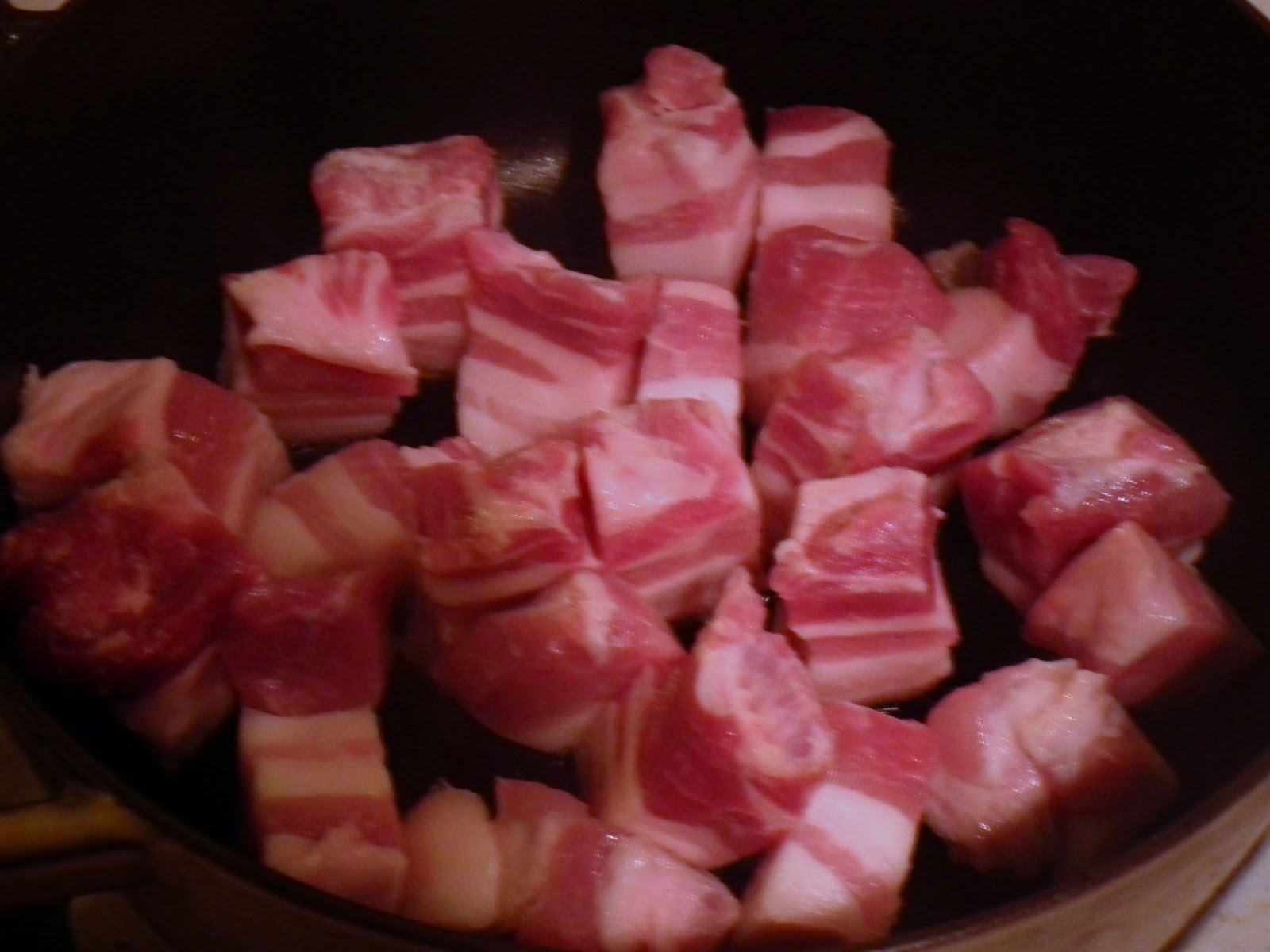 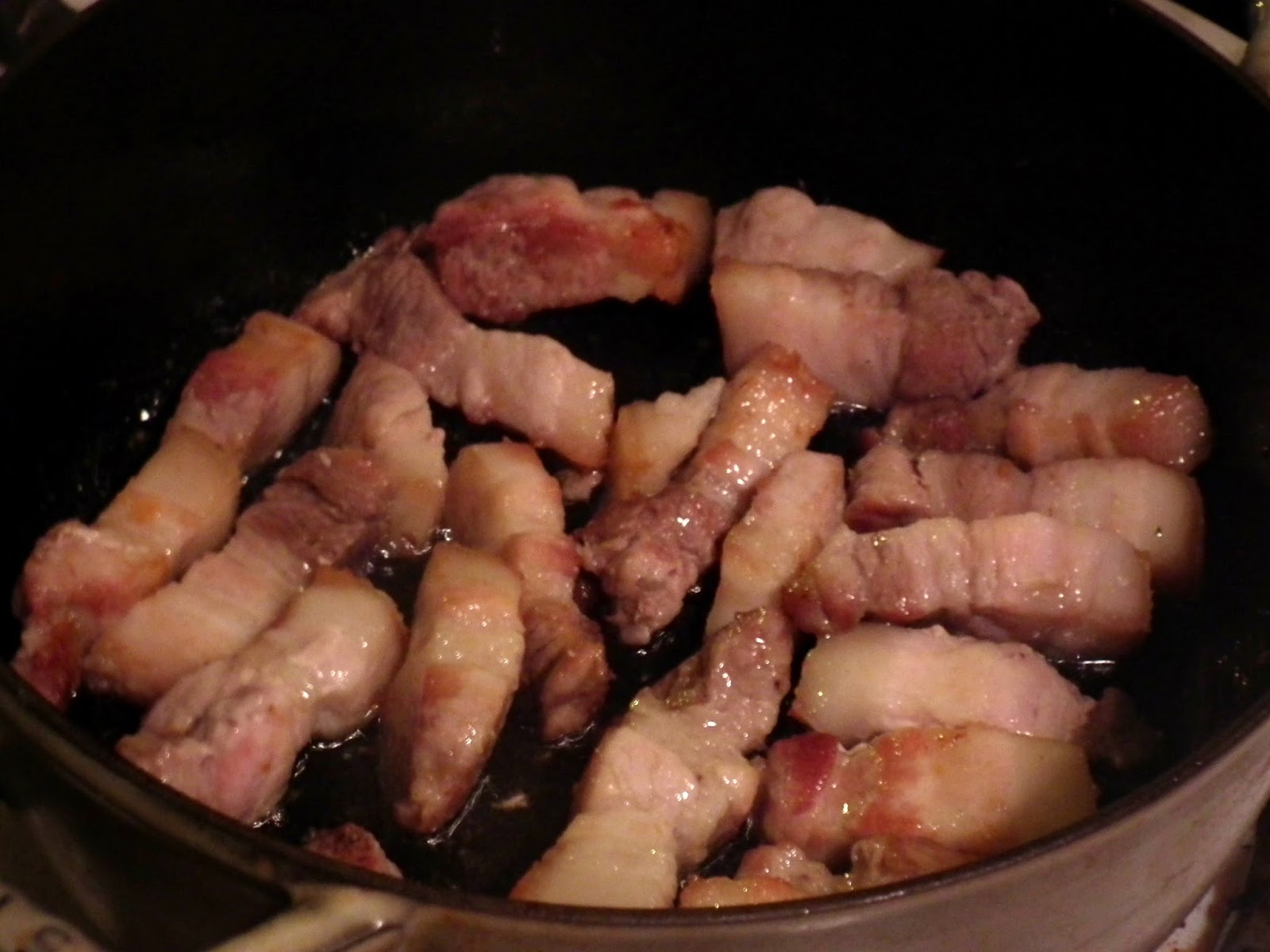 While your pork is cooking, you can make the dressing for your salad.  In a food processor, combine:
3 oz. palm sugar or 2 rounds gula jawa or 1/4 c. light brown sugar
1 c. rice vinegar (we used Chinese cooking wine since we were out of rice vinegar)
1/2 c. fresh lime juice
4 inches fresh ginger, peeled and sliced
24 cilantro stems (use both the leaves and stems)
2 garlic cloves
3/4 tsp Kosher salt

Mix equal parts watermelon and pickled rinds, along with 2 sliced scallions, and freshly torn mint and Thai basil leaves (we used lemon basil instead).  Pour enough dressing over the salad so it lightly coats everything.  When your pork is done, divide it amongst your plates, and top each with the watermelon salad.  Garnish with some sesame seeds, and in our case, some crumbled chicharrones (I couldn't pass them up in the market!). 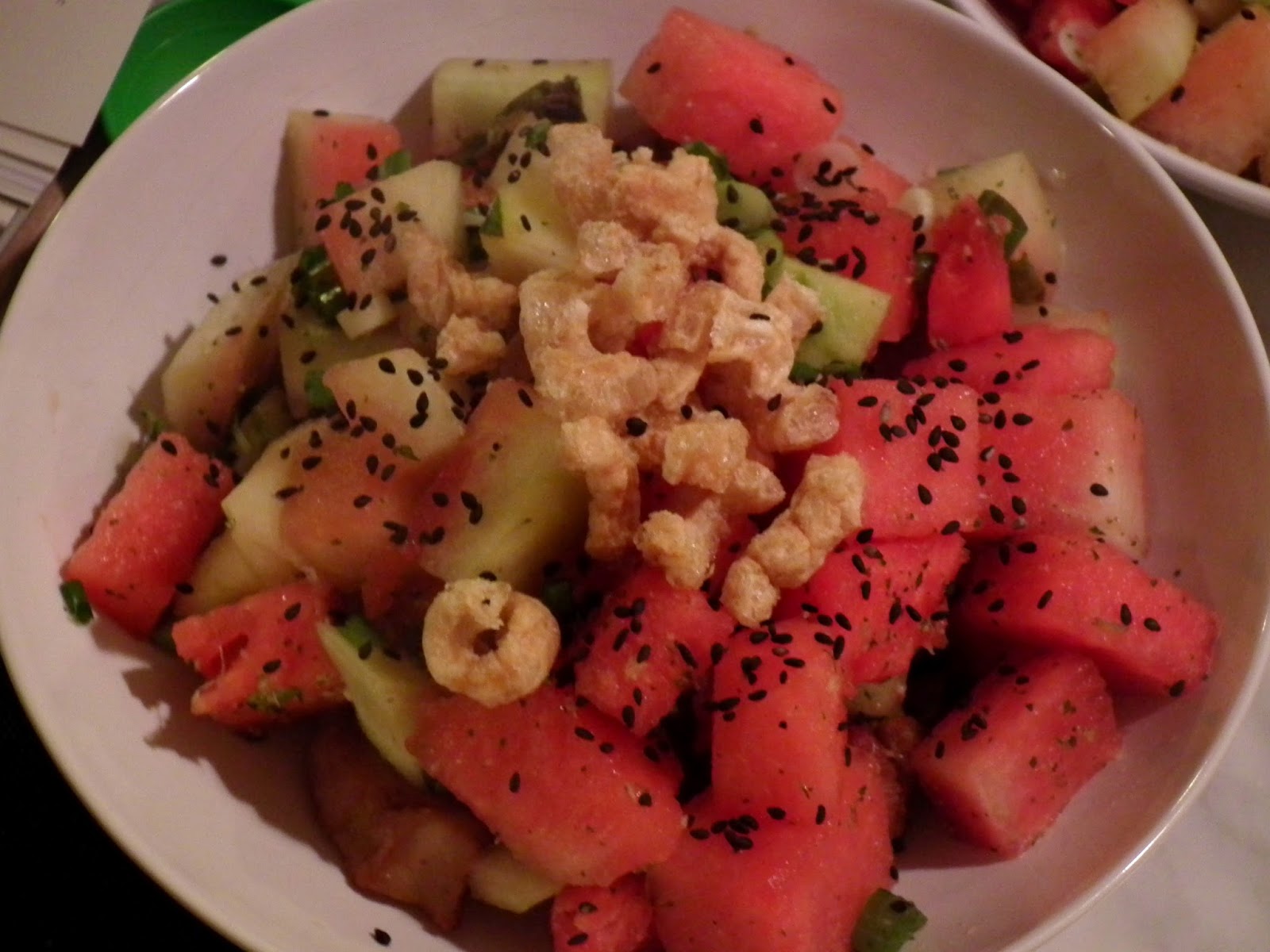 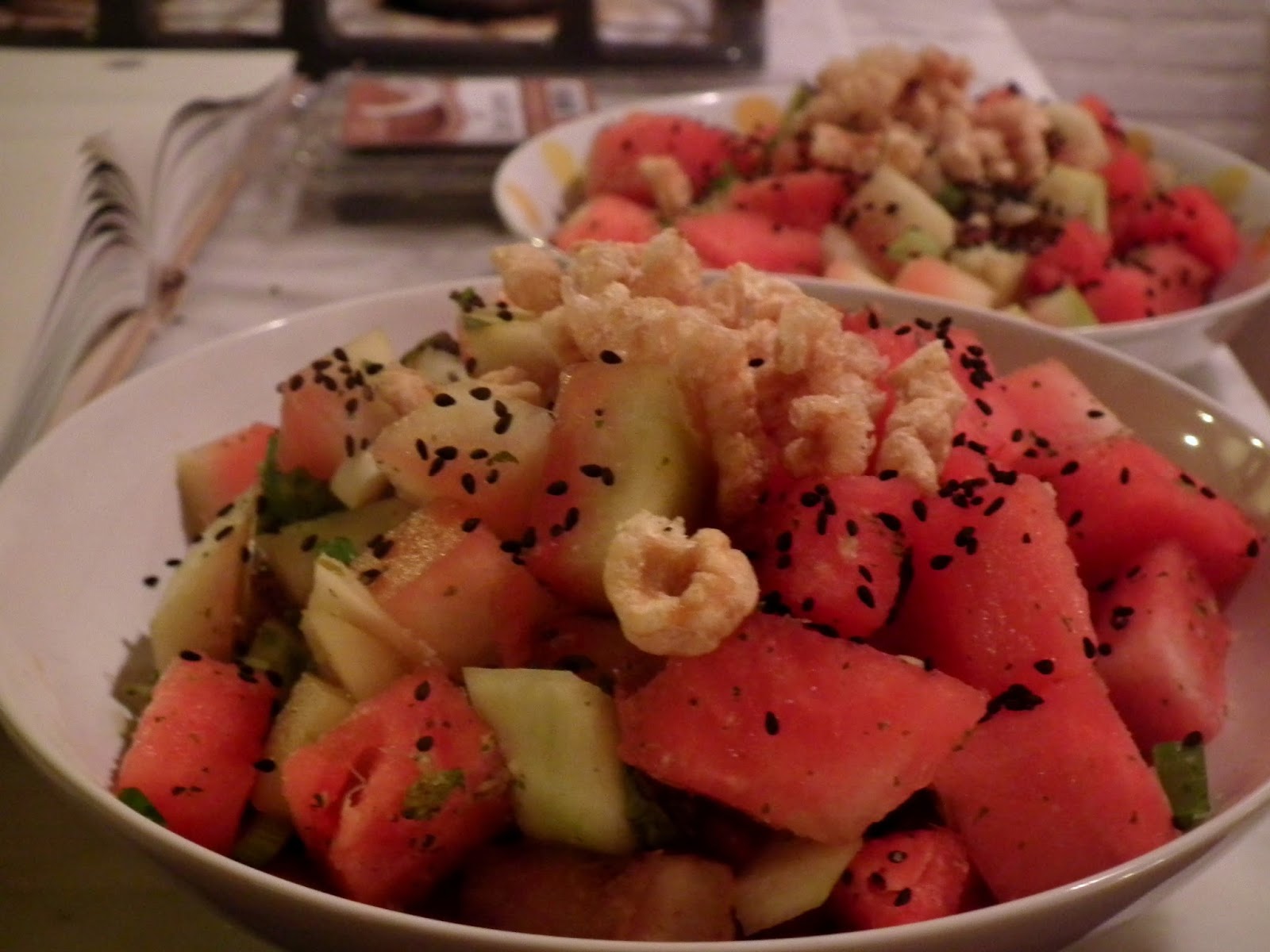 We were slightly worried how this would come out.  As any good chefs, we try and taste the elements along the way; the rinds were bordering on too sour, the watermelon was cloyingly sweet, and the belly was very rich.  Fortunately, the sum was definitively greater than its parts--this was a delicious meal.  Calling it a salad doesn't do it justice.  The dressing, along with the mint and basil rounded it out with a clean, herbaceous taste.  There is a definite salty, sweet, and sour thing going on here that made you want to keep going back for another bite.  The chicharrones and sesame seeds gave it a nice crunchy textural component.   I strongly suggest getting a piece of pickled rind, the sweet watermelon, and the warm crispy pork all in one bite.  The flavors really pop in your mouth, and compliment each other nicely.  Take it from us, this is one summer dish that can't be missed!
Posted by Unknown at 4:23 PM