Every Sunday growing up, we'd have a light breakfast, and my mom would make a giant platter of noodles for lunch.  You'd think she were serving an army, but it was usually just the 3 of us; mom, dad & me.  She'd rotate between chicken chow mein, Singapore style noodles (my and Justin's favorite), and tomato beef chow mein.  In an effort to continue the tradition, we whipped up some tomato beef chow mein, albeit for dinner rather than lunch, on a recent rainy Sunday. 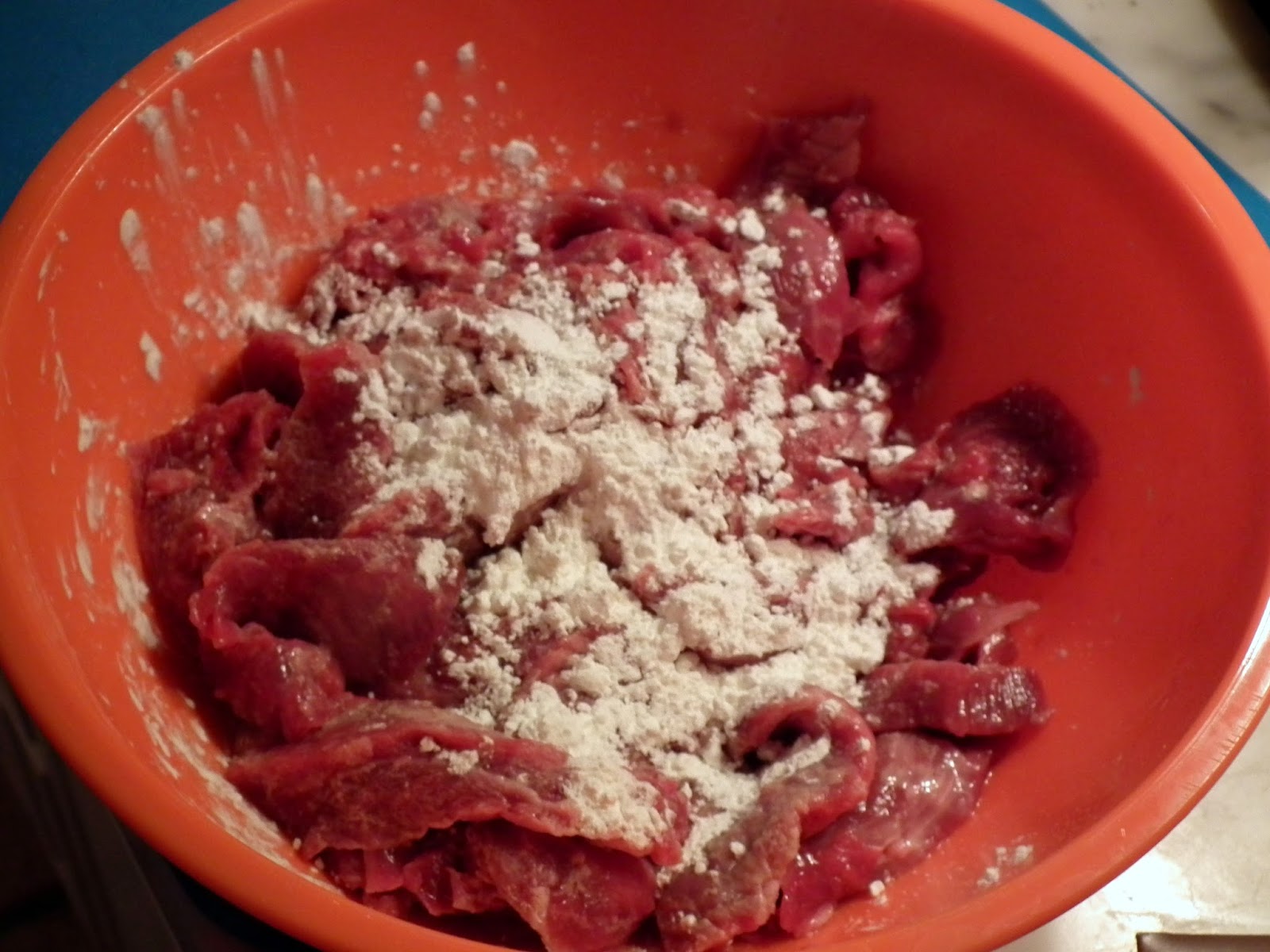 Start by slicing your flank steak into bite size pieces.  Season it with some white pepper, and make a marinade of soy sauce, sesame oil, and Chinese five spice.  You'll also want to toss in some cornstarch; just enough to coat the meat.  This will help give the meat a nice crust when you cook it, and help thicken the sauce. 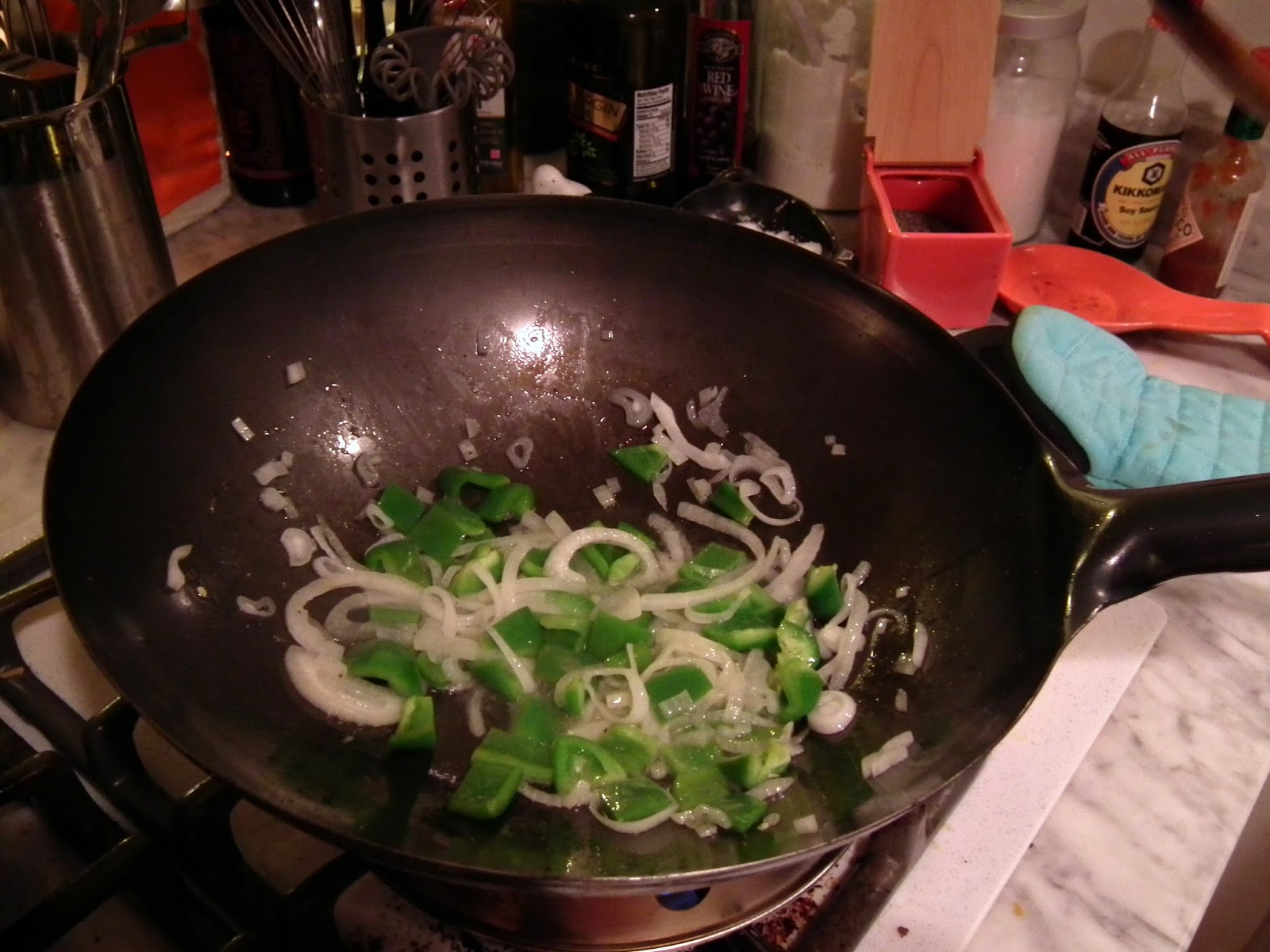 While your meat is marinating, you can get to work on your sauce.  Start by slicing up some onion and bell pepper.  It's up to you how you want to slice 'em.  Mom always cut them into chunks, which makes it easier to pick up with chopsticks, but it's totally up to you.  Toss them into your wok with some oil so they start to cook and soften.  You'll also want to slice up some celery.  I like my celery to still have some bite to it, so I add these in towards the end. 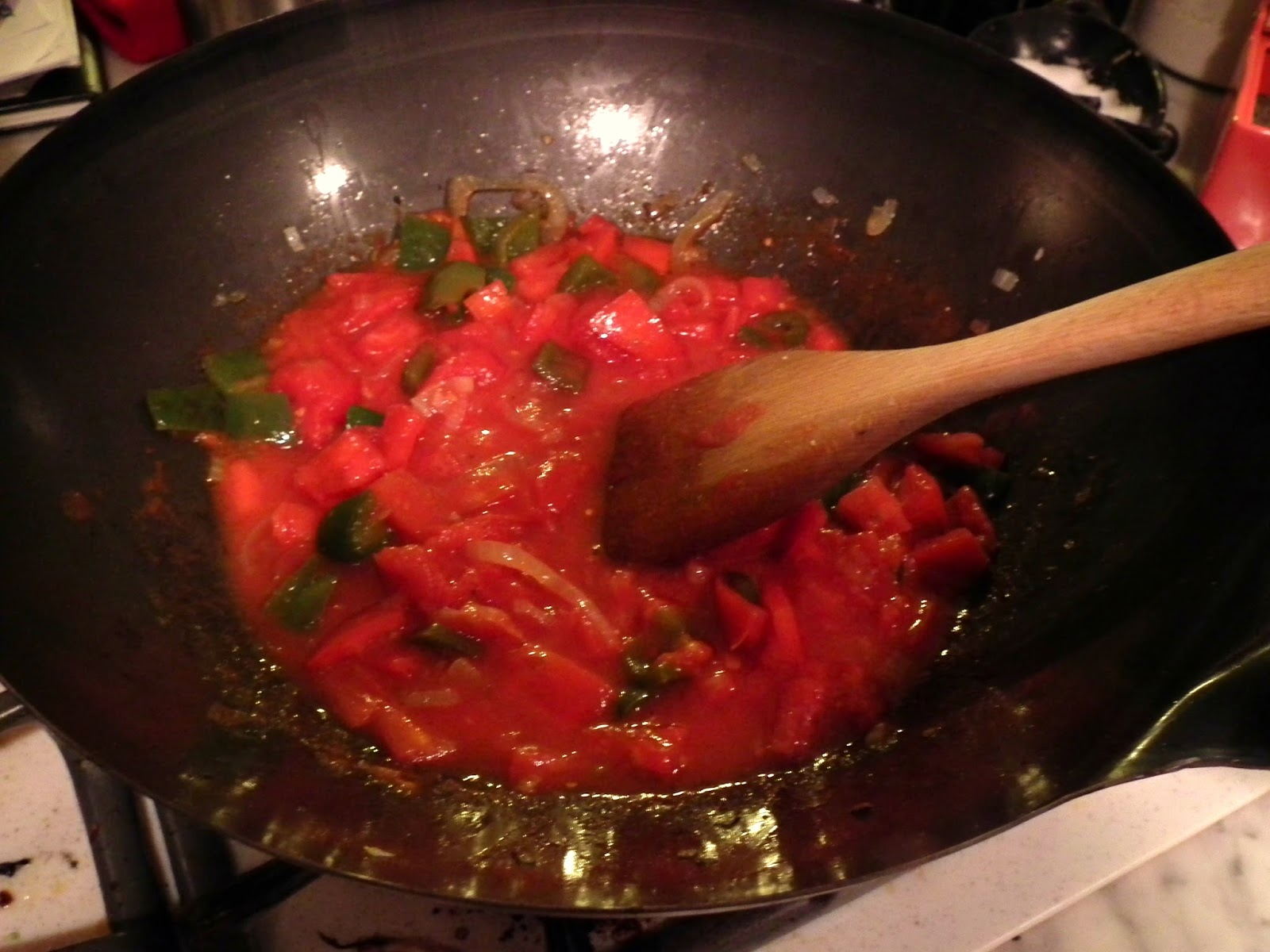 Once your peppers and onions have softened, add in your tomatoes.  We happened to have some fresh tomatoes on hand that needed to be used, so we diced those up and added them to the wok.  It wasn't quite enough, so we also added in about half a large can of tomatoes.  As they start to cook down you can just use a wooden spoon to break them up into more manageable chunks.  You'll also want to add in curry powder. 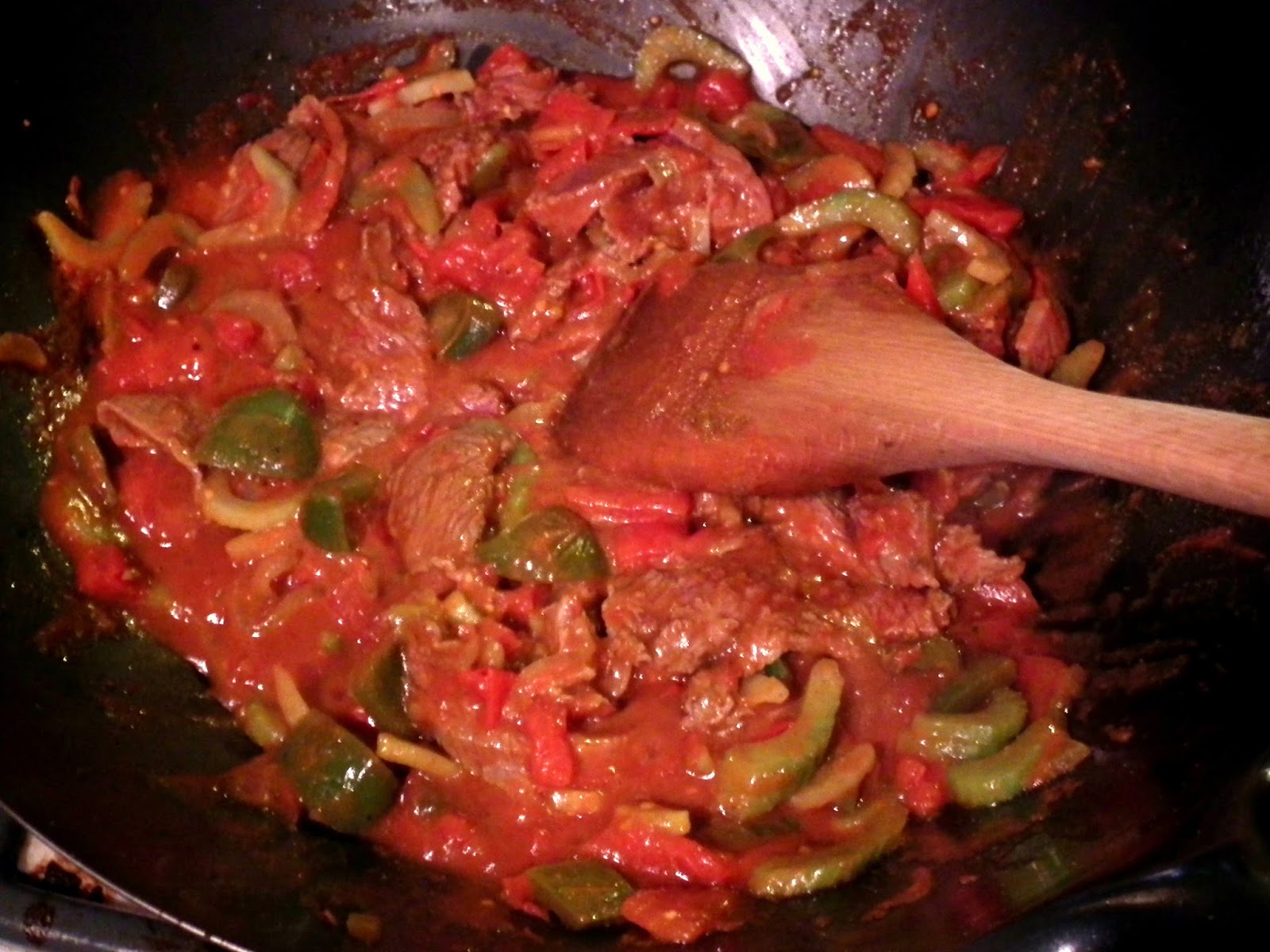 Once the tomatoes start to break down, add in your meat.  I just dump the whole bowl in, including any extra cornstarch that's in there.  Again, this will help thicken your sauce so you have a thicker, gravy-like consistency.  Just before the meat is cooked through, I add in the celery.

While all this is going on, you should boil some water for your noodles.  You'll first want to cook them in the boiling water, like you would pasta, but pull them out while they're still slightly underdone.  Transfer them to a baking sheet that you've sprayed with cooking spray, and pop them in the oven so they can crisp up.  Once they're golden brown, flip the noodles, and pop 'em back in the oven so the other side can get crisp.  The easiest way to flip your noodles is to place another baking sheet on top of the pan with the noodles, and flip 'em over. 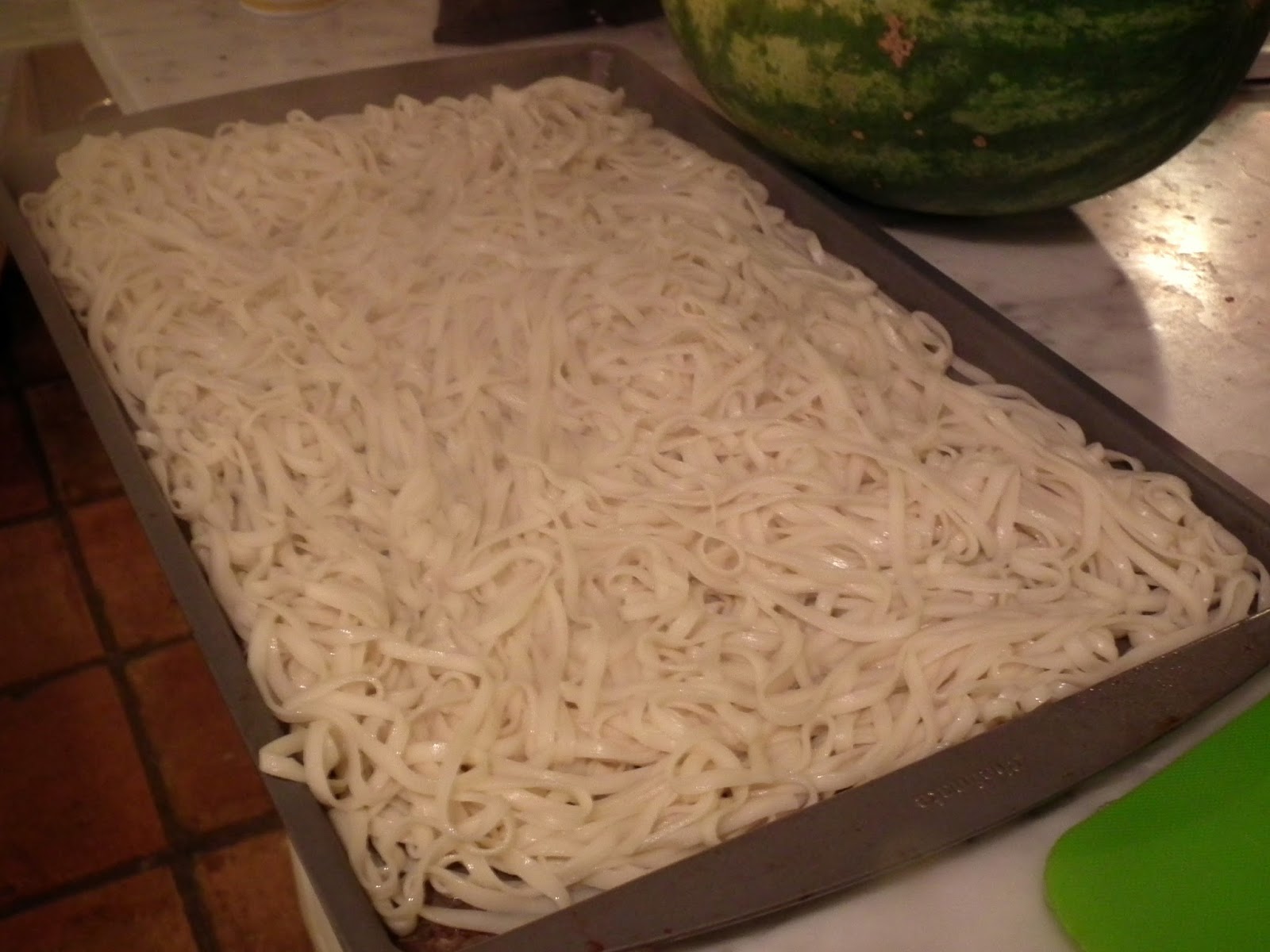 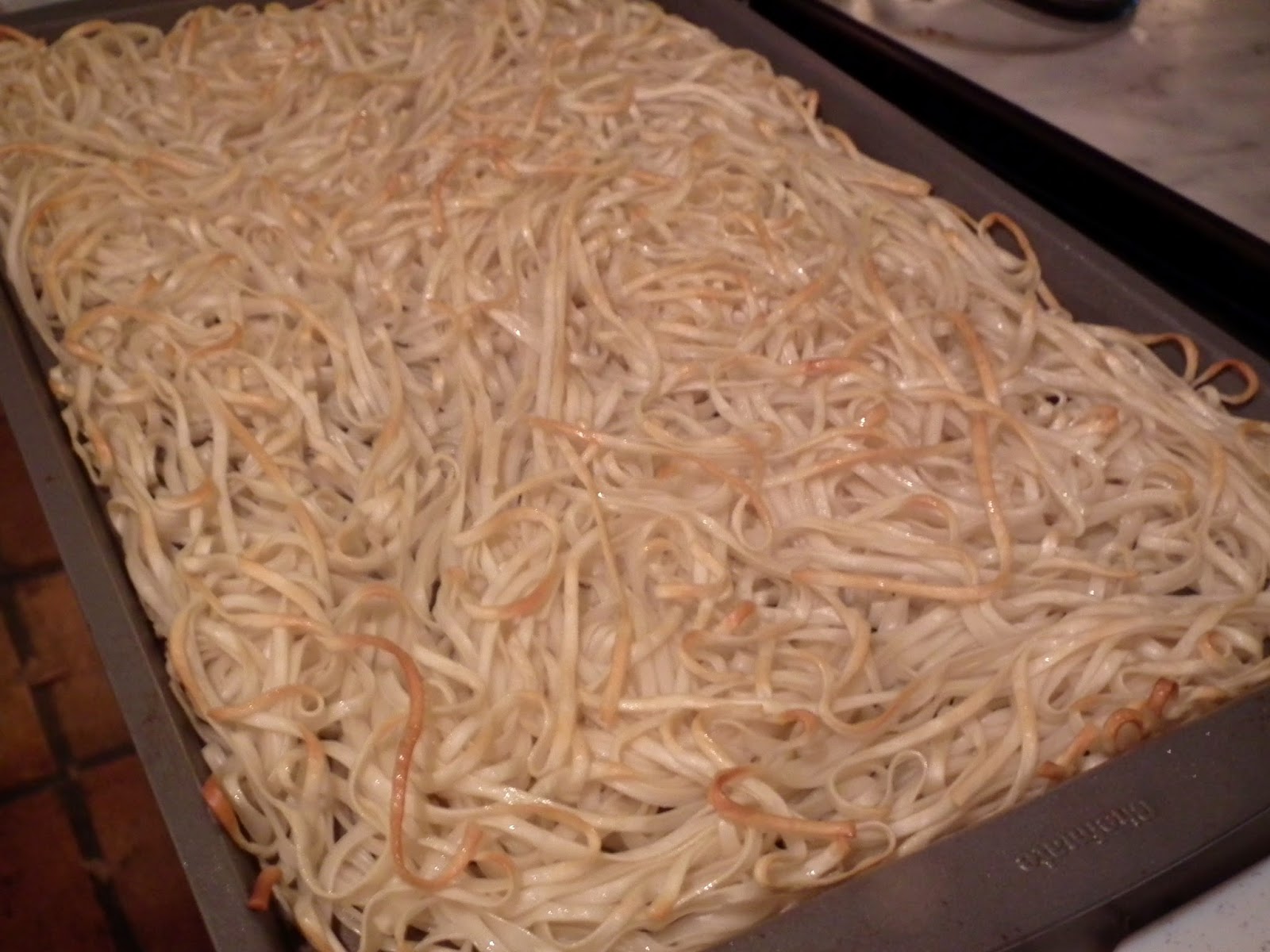 Once the noodles are done, pull 'em out of the oven, and you're ready to serve!  If you're serving it up family style, place your noodles on a platter and top with your sauce.  The warm sauce will help soften your crisp noodles, and make it easier to break them apart and eat.  Since it was just Justin and I, we put noodles in each of our bowls, and spooned on the sauce. 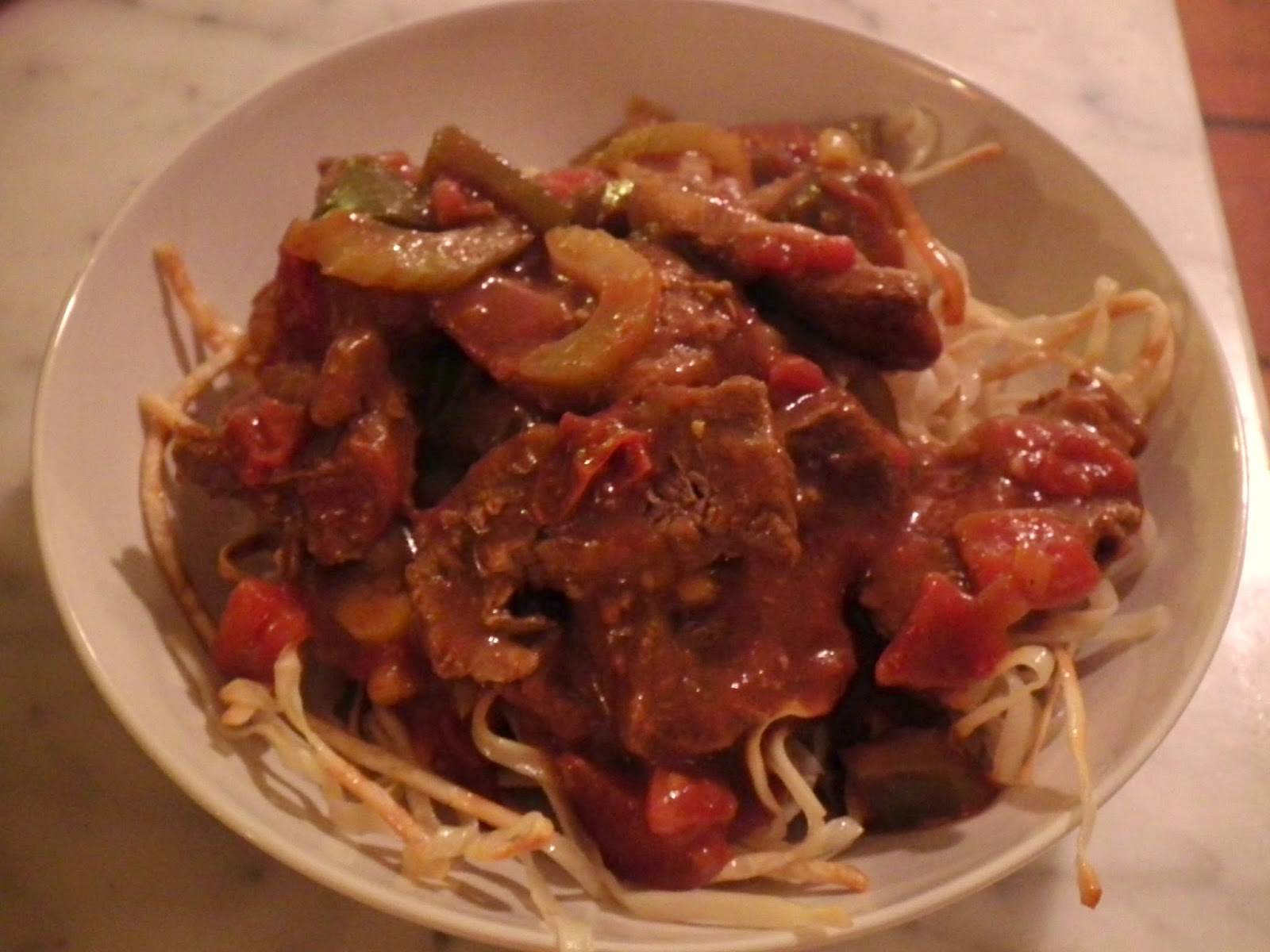 It was a great, comfort meal on a rainy day.  Almost as good as mom's!
Posted by Unknown at 4:13 PM