When we got a whole cornish hen in our recent share, we wanted to do something more with it than just roasting it in the oven, or making beer can chicken again.  We turned to Eat With Your Hands for some inspiration, and found a recipe for tumeric chicken and celery mostarda, and we just had to try it out.

We started off by rinsing our hen.  After we were done making her dance around and flap her wings, we patted her dry and set her aside while we prepared her butter rub. 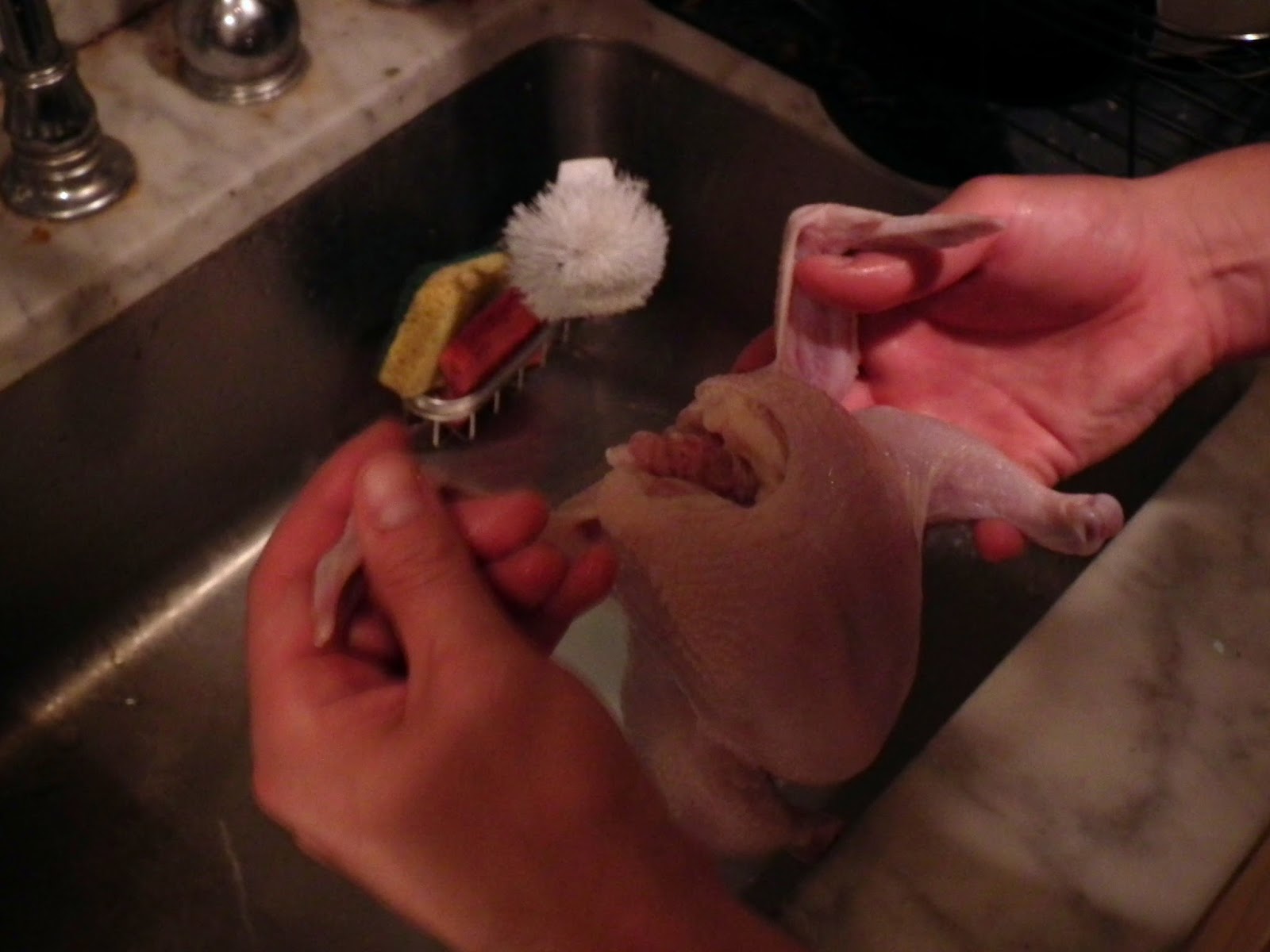 For the butter spice rub, we combined a jalepeno, turmeric, a couple cloves of garlic, kosher salt, and some fenugreek (our own tweak to the recipe), and smashed it into a paste with my mortar & pestle.  It takes a little elbow grease, but your'll end up with a nice paste. 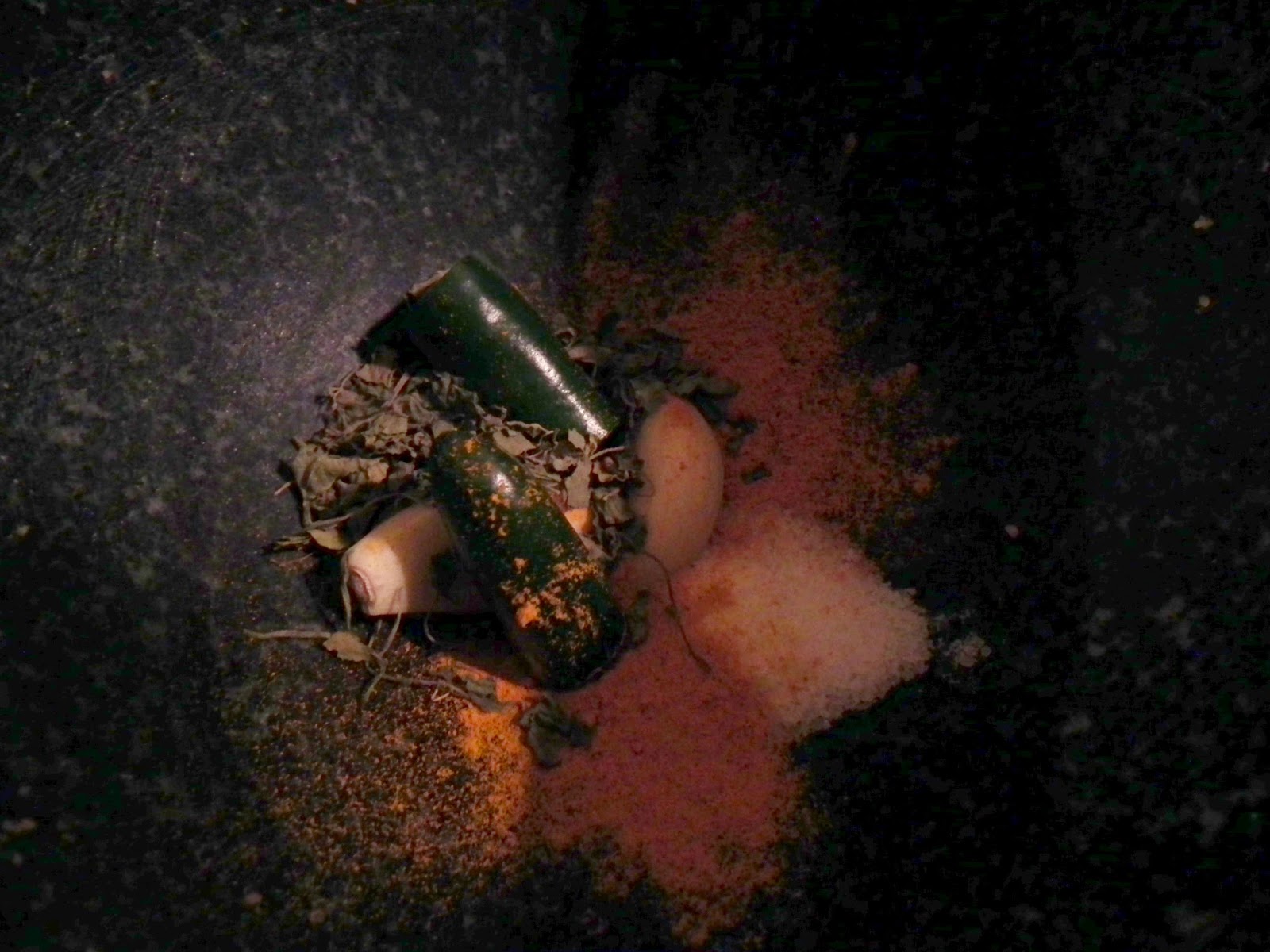 Add your paste to some softened butter until it's well combined.  Then you're ready to massage it into your bird.  Make sure you get in all the nooks and crannies, as well as under the skin.  You should be able to separate the skin from the meat just enough to slide some of your spiced butter in there. 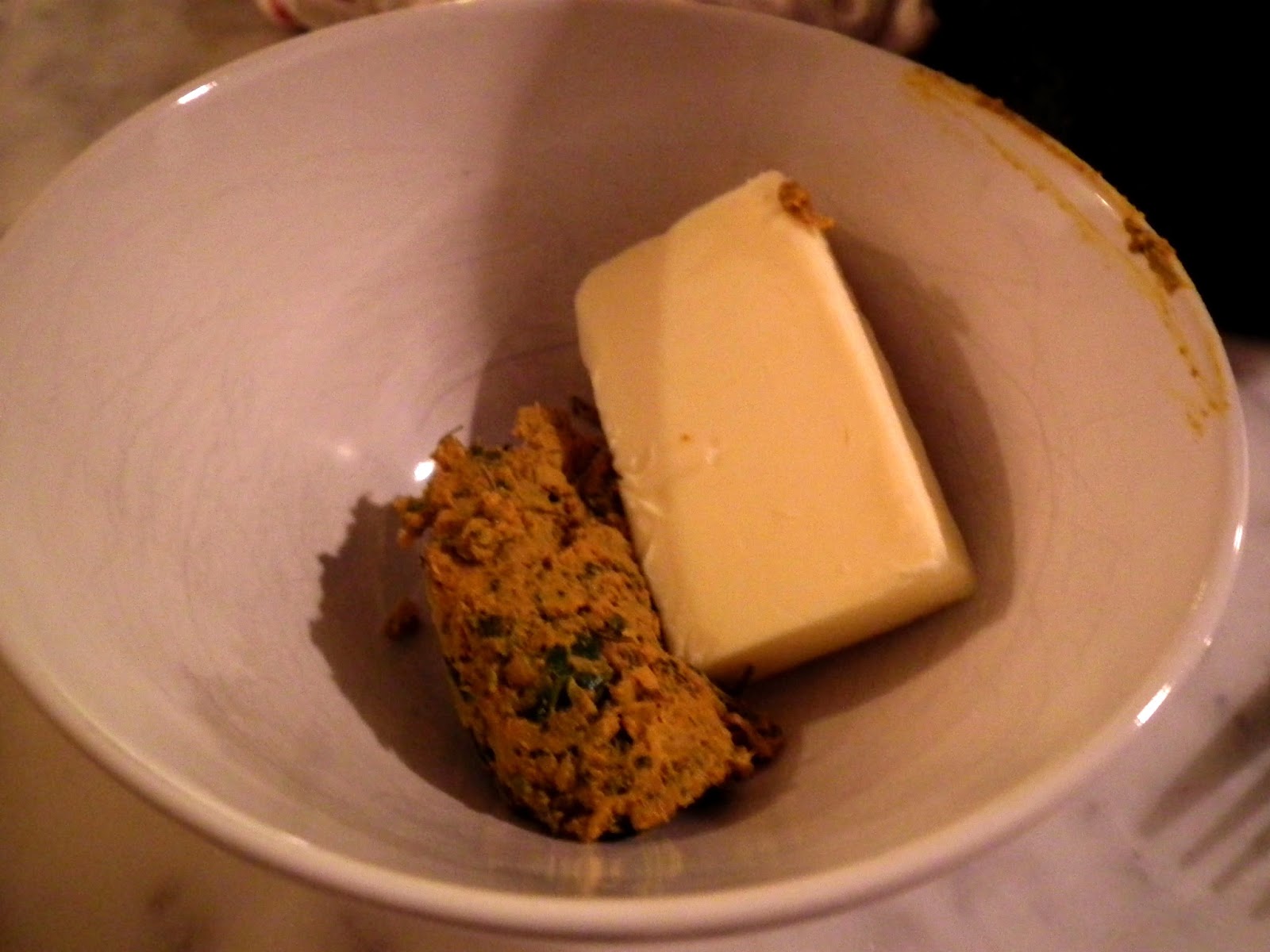 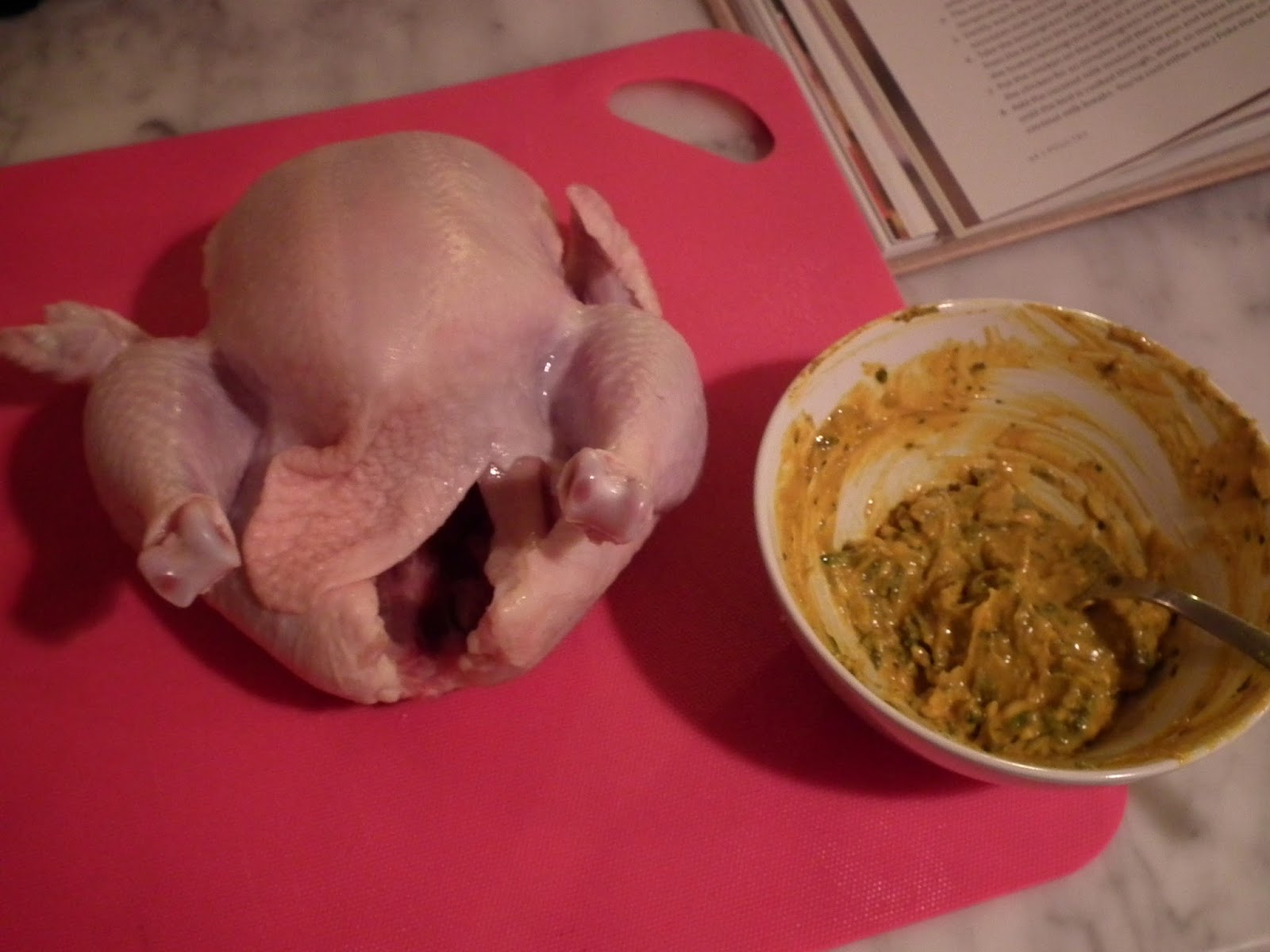 You're supposed to let your chicken marinate overnight, but we didn't read the recipe in advance.  So don't fret.  It still turns out tasty and delicious!  Now with your lemongrass, give the stalks a few good whacks with your knife.  This will let the lemongrass essence come out when it's in the oven.  Place the stalks in the bottom of your pan, and place your bird on top of them.  This prevents the bottom of your bird from cooking too fast, and imparts some nice flavor. 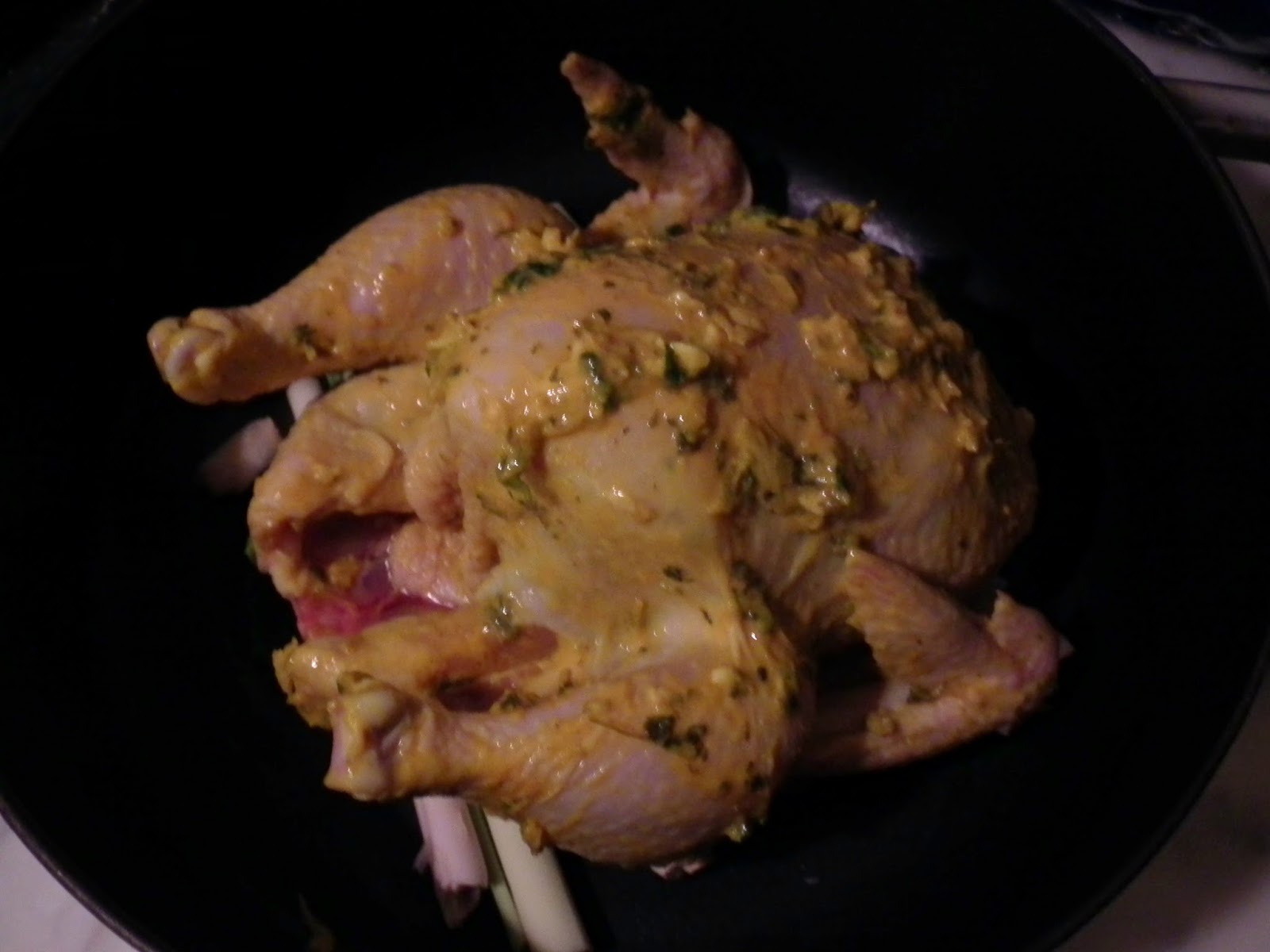 Pop her in the oven for about 20 minutes, then add some coconut milk and a bit of lime juice to your pan, and put her back in the oven.  You'll want to baste her periodically for the last 20 minutes as well. 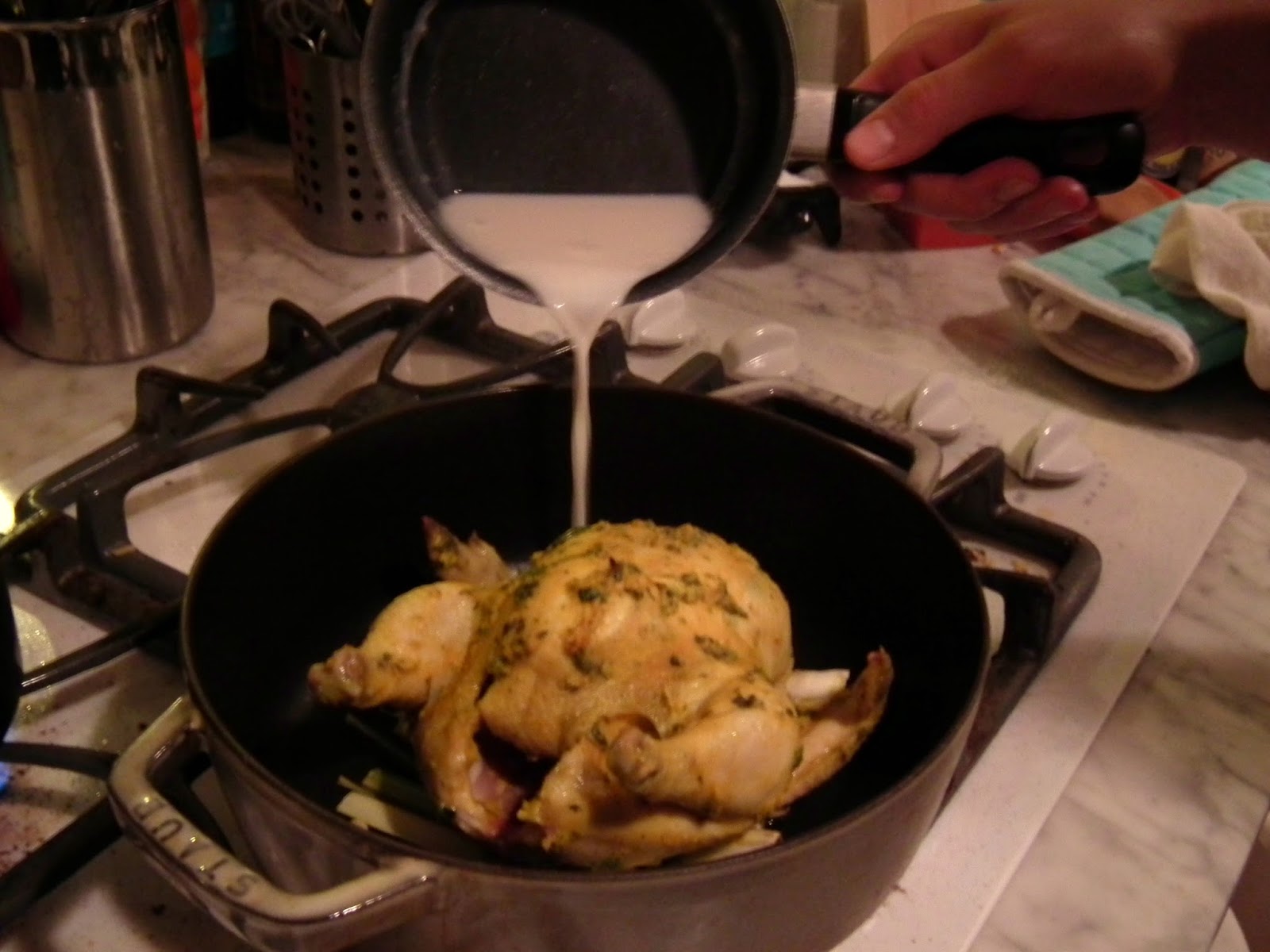 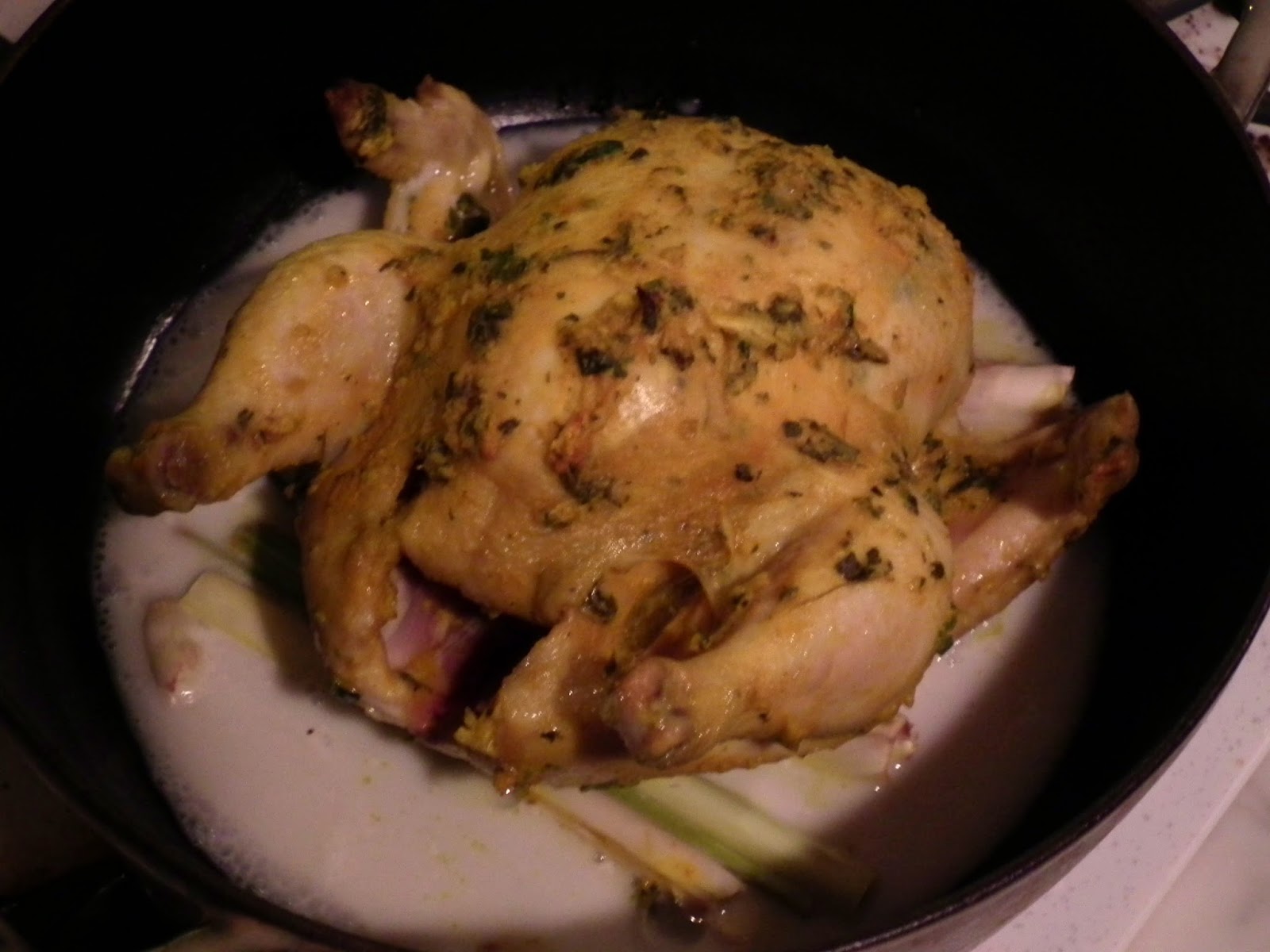 While your bird is roasting, you can start on your celery mostarda.  Mostarda is a traditional Italian condiment of candied fruits made with mustard oil.  But Pelaccio puts an Asian spin on it by adding some heat, and fish sauce to the mix.  Start by slicing your celery into pieces, and toss with some salt. 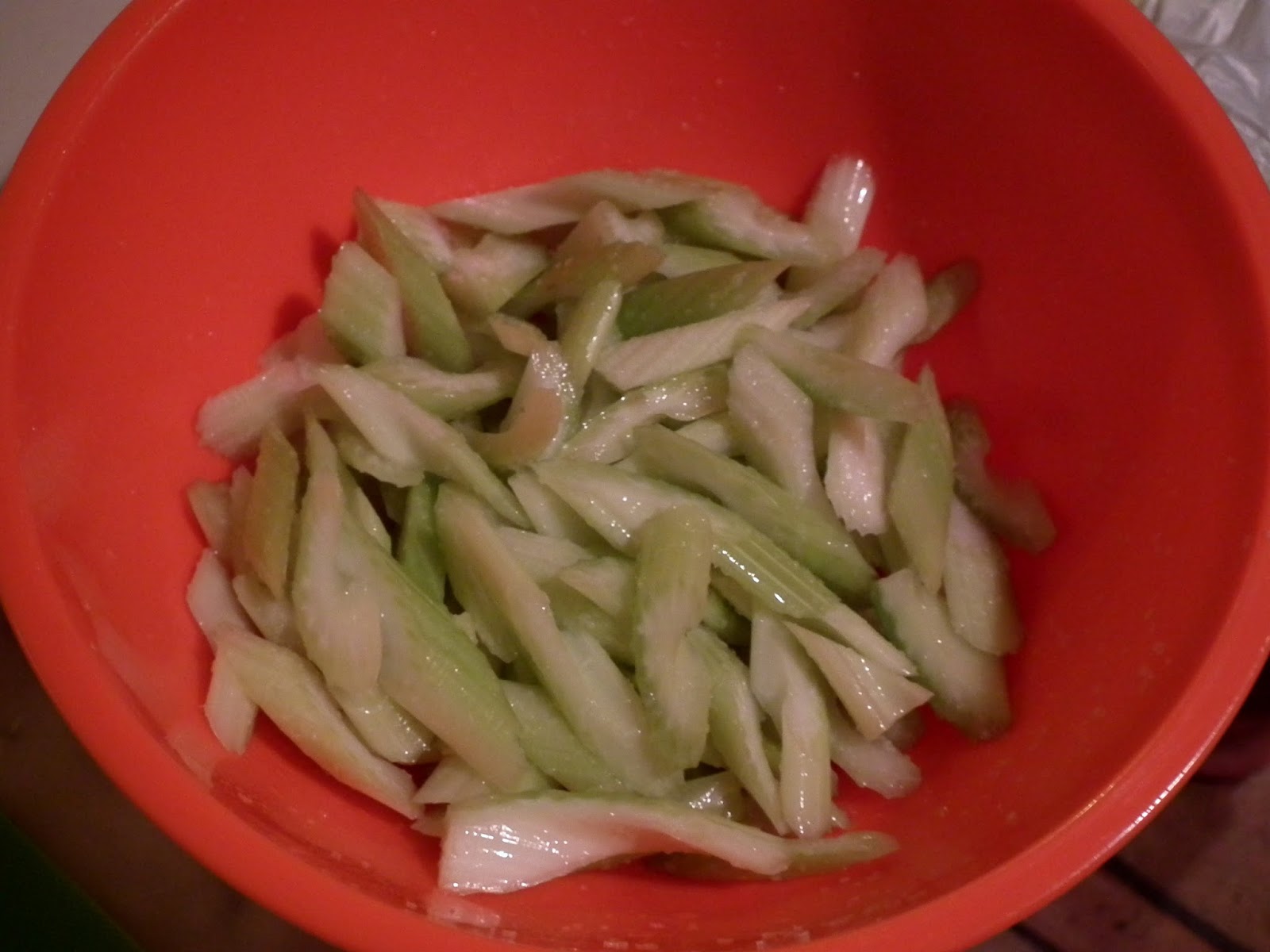 In a separate bowl, combine a couple dried chilies, fish sauce, honey, star anise, cloves and some water.  Make sure you toast your chilies prior to adding them to your liquid, and be careful not to inhale over the toasted chilies.  We made the mistake, despite the warnings in the cookbook.  Let's just say, it's not pleasant. 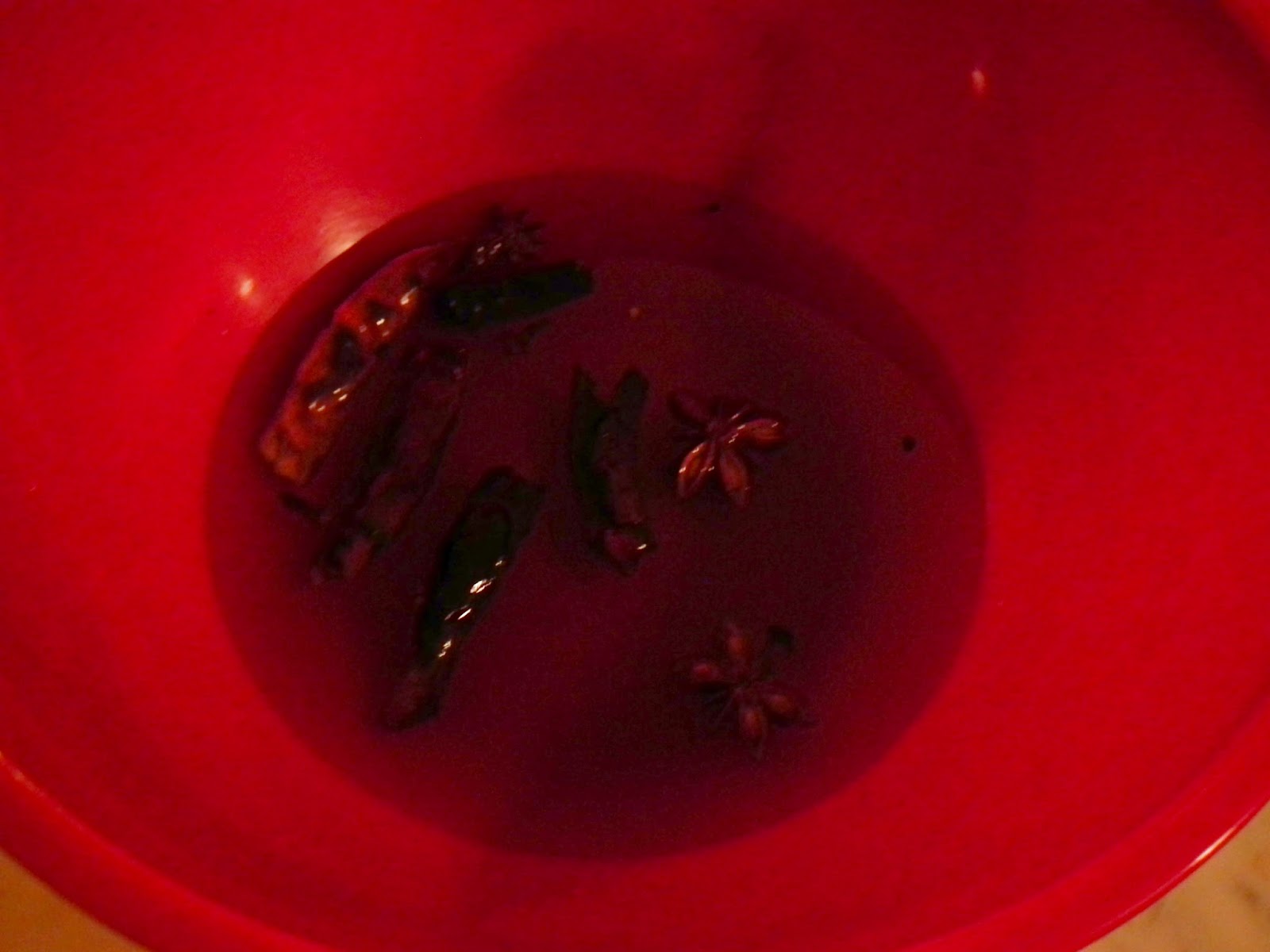 Melt some butter in a small saucepan, and add your celery.  After about a minute, add your liquid mixture, and let it cook until the celery is tender. 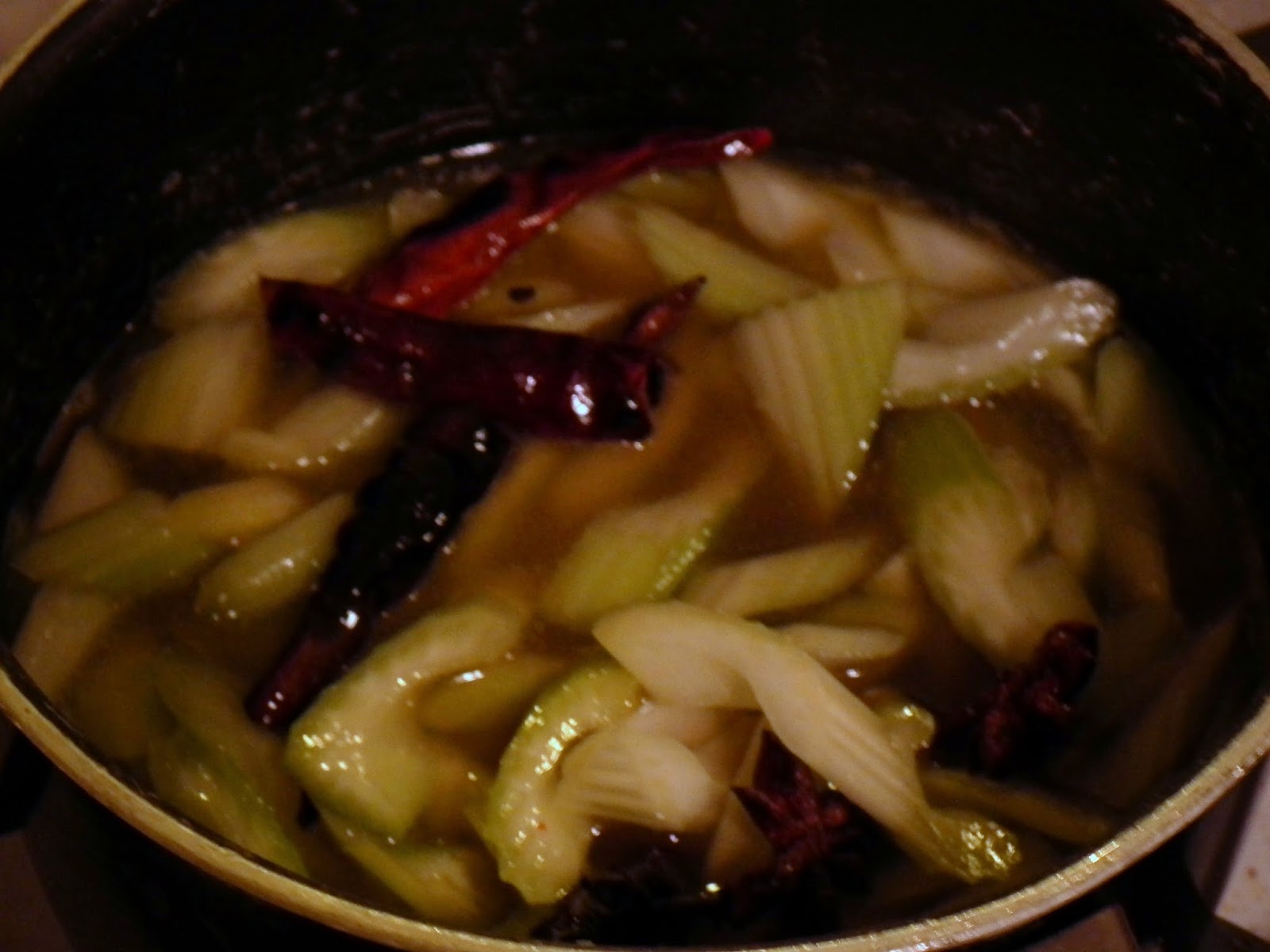 Pull your cooked celery out of the pot, and let your pickling liquid continue to reduce until it is the consistency of maple syrup.  We didn't have any mustard oil on hand, so we had to improvise a bit.  We toasted up some mustard seeds, and then ground them in the mortar & pestle with a bit of sesame oil.  Once your liquid has thickened, whisk in your mustard oil, and then pour it over the celery.  You'll want to be sure to remove the chilies, star anise and cloves first.  You can also can your mostarda, like you would pickles.  If you do that, you can keep the aromatics in the liquid.  But since we were going to eat ours right away, we made sure to remove them, so we didn't accidentally bite into a clove or star anise pod, and ruin our pallets. 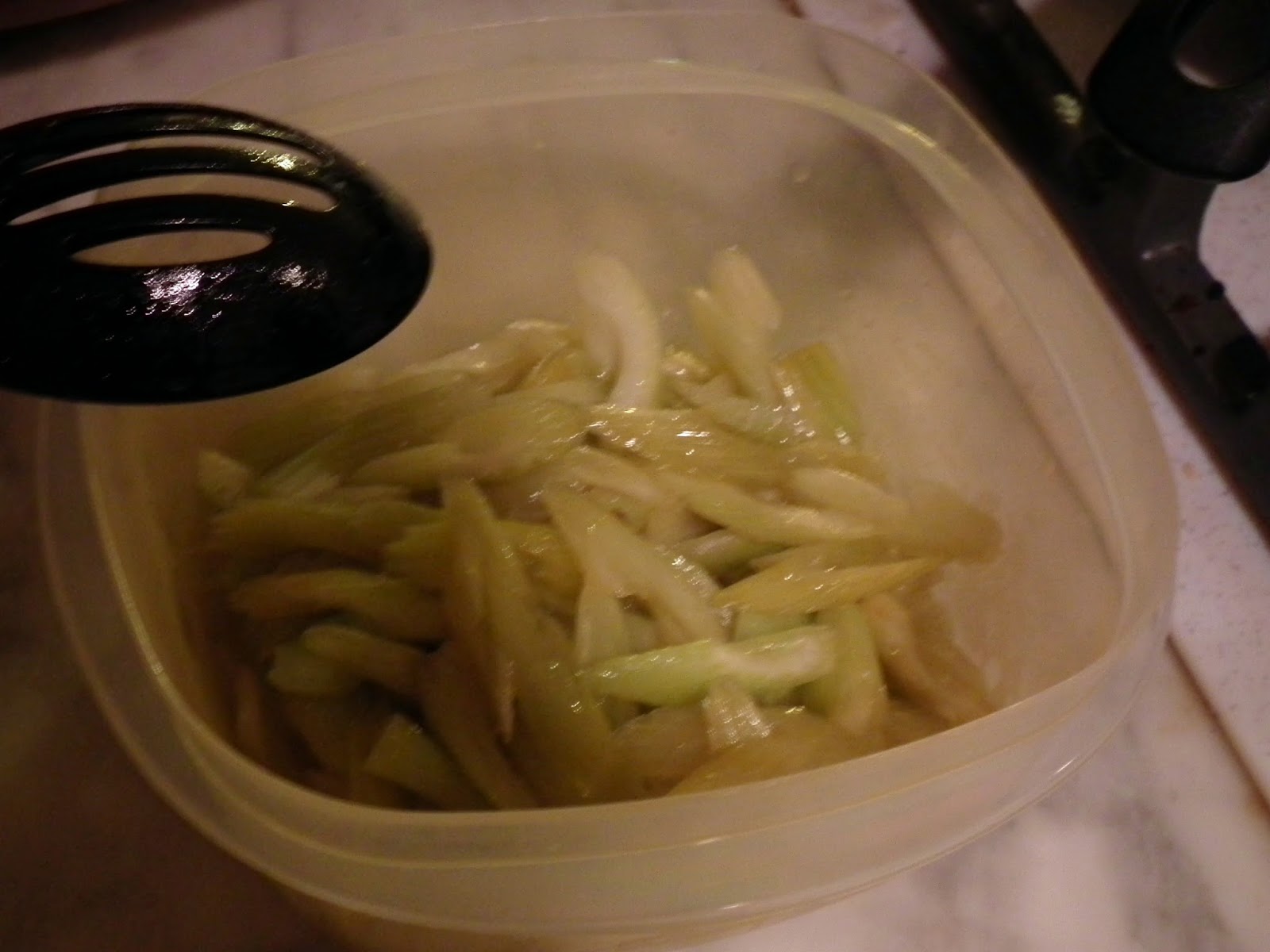 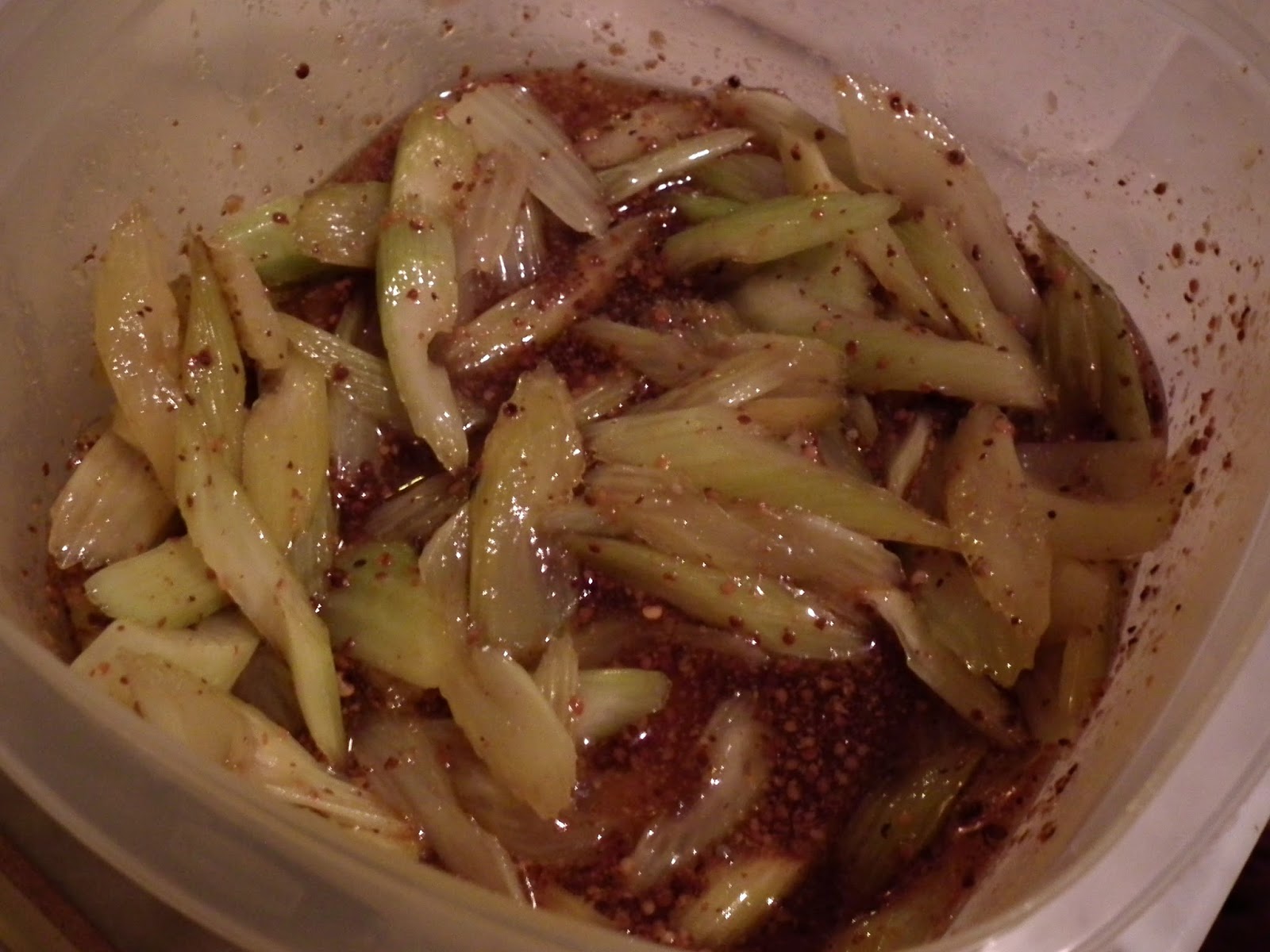 By the time your celery is done, your chicken should be done too.  Pull her out of the oven, and make sure to let her rest before you carve her up. 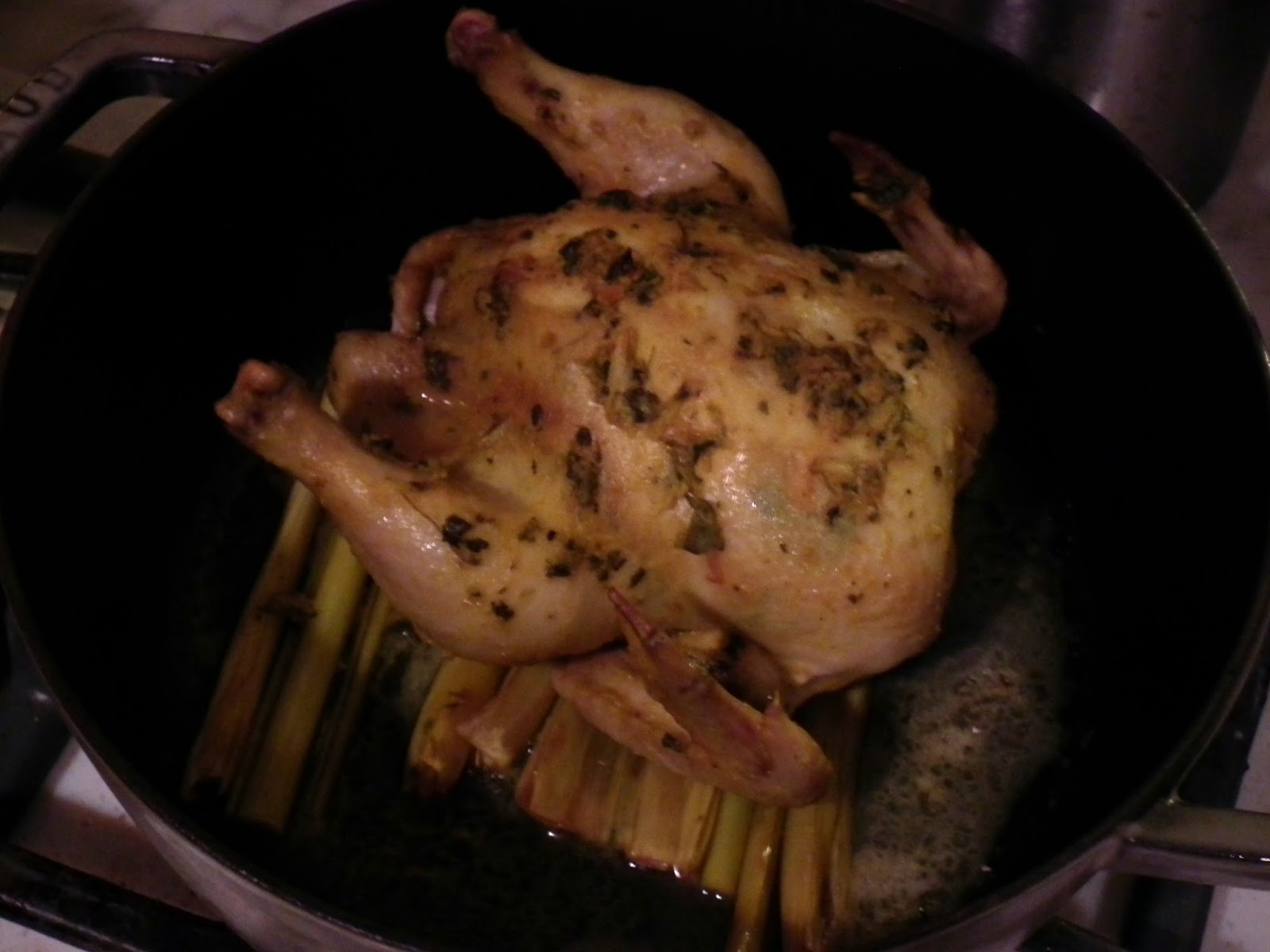 Our cornish hen was super moist, and had a very subtle coconutty flavor that mellowed out the spice rub.  It came out pretty tender with crisp skin and cooking it on the lemongrass imparted a citrusy taste without an acidic bite.  As good as the meat was, the real hero was the celery mostarda.  Taking cues from Malaysian cuisine, it had spicy, sweet, and sour flavors that awaken your taste buds.  The celery was a perfect blank canvas for all that flavor, and the texture was really nice as well. 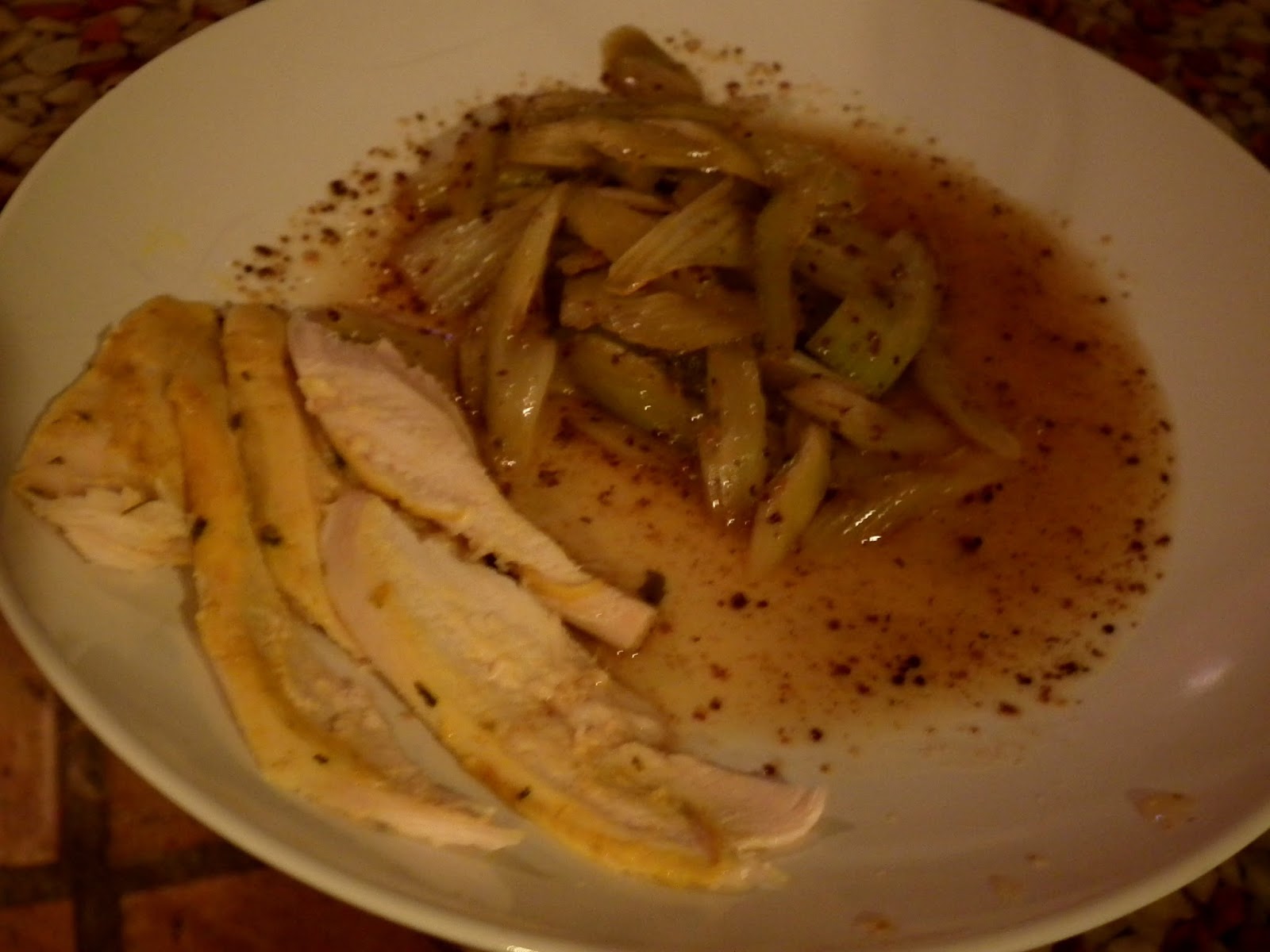