Since we lost an hour of sleep last night, we ended up sleeping in a little later than planned.  It was too late for breakfast, but we weren't ready for lunch quite yet, so we decided to make a fantastic brunch right at home.  You know how us DCers love our brunch!  With our new Paleo diet, we designated Sundays as our cheat day.  We didn't stray too far from it for brunch, but there were definitely a few ingredients you wouldn't find in the typical Paleo plan...ricotta, parmesan, flour.  We started our day with a frittata, filled with greens and bacon, and some apple pancakes, which were more apple than pancake. 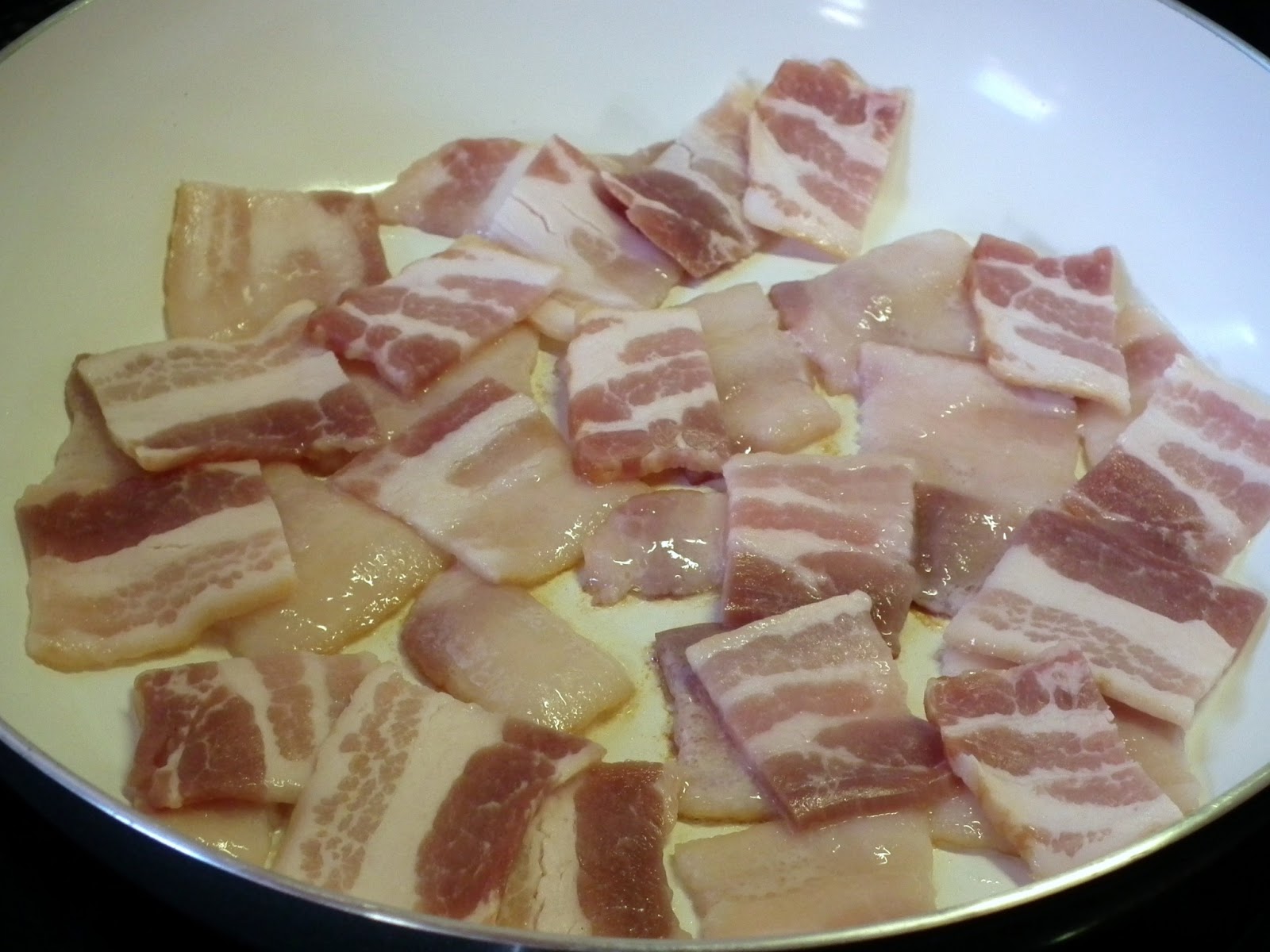 We first got to work on the frittata by cooking up some bacon.  Once it was nice and crispy, we took it out of the pan, so we could cook up the other ingredients in the rendered fat.  The extra fat that we didn't need at the moment, went into a dish nearby, to be added back in later.

Next, it was time to saute the shallots in some of that bacon fat.  Once those were softened, we tossed in the greens.  We didn't want to use all of our kale, so we used a bit of kale and a bit of spinach.  These were also cooked up in the bacon fat until they had wilted. 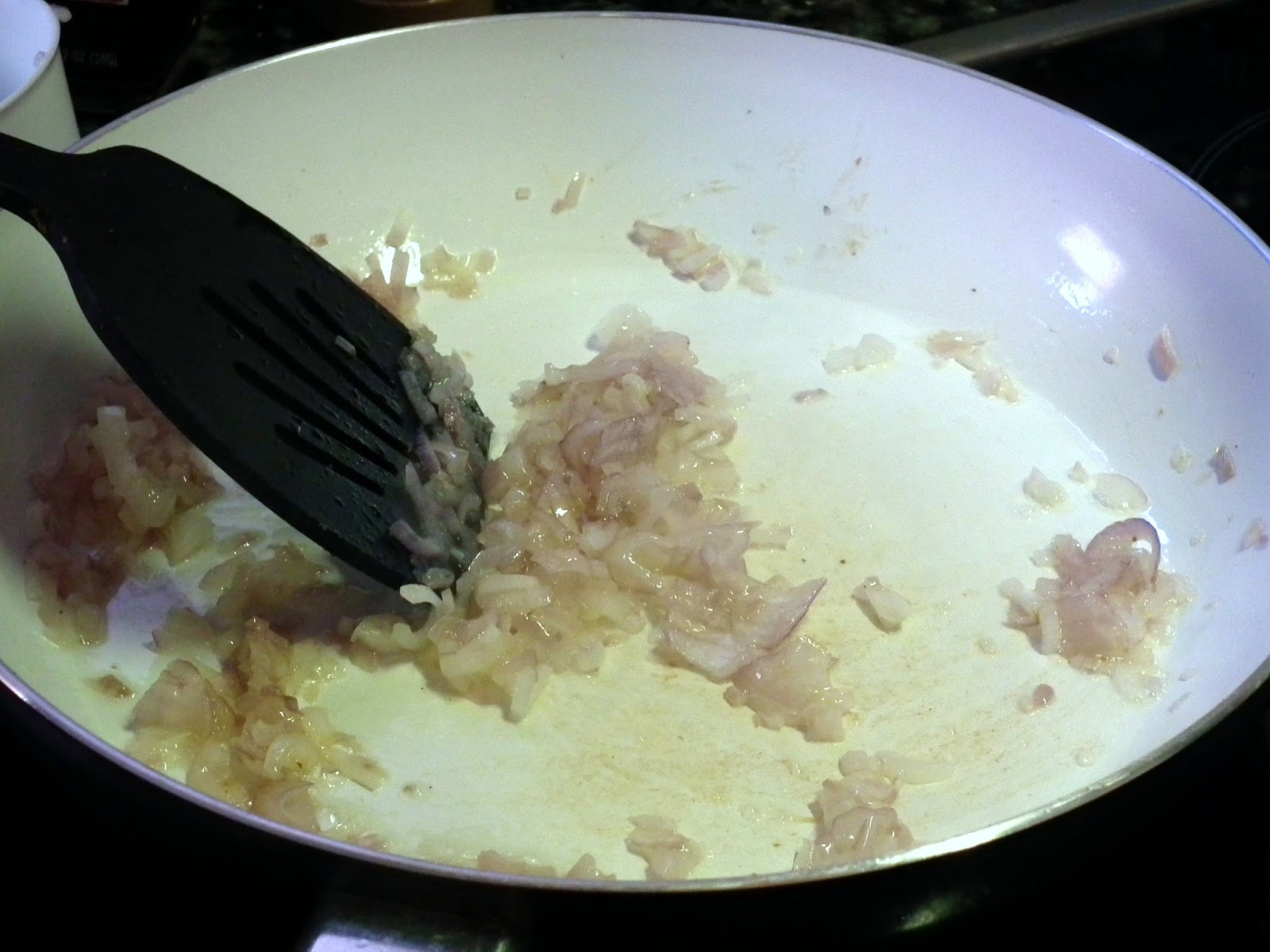 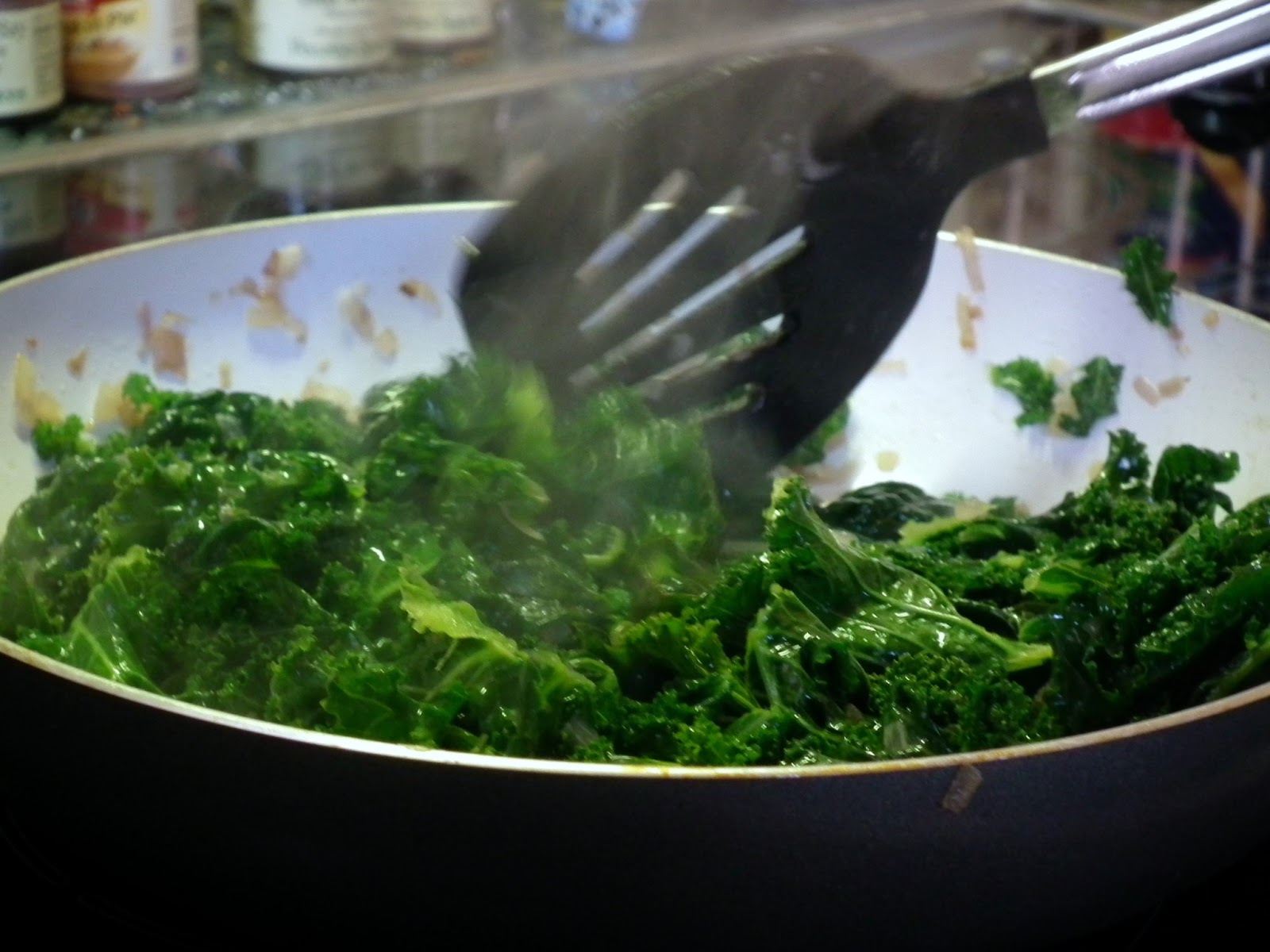 While that was going on, I mixed together the eggs, parmesan, and ricotta.  Once those were thoroughly mixed, we added in half of the bacon, and the cooled greens and shallots.  You don't want to add them to the egg mixture while they're piping hot, otherwise you'll end up with scrambled eggs.  We also added in some black pepper, crushed red pepper flakes, and some dried parsley. 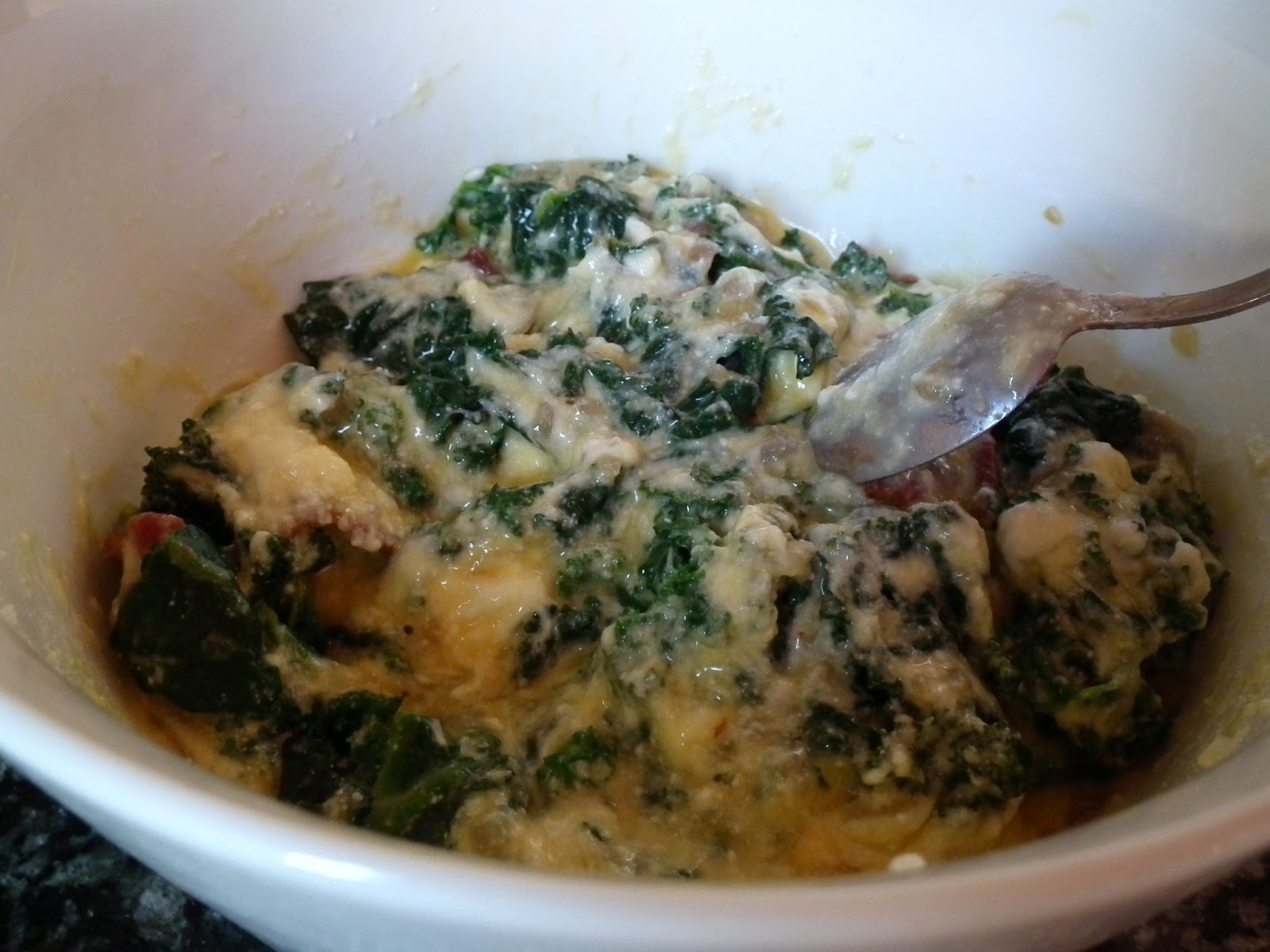 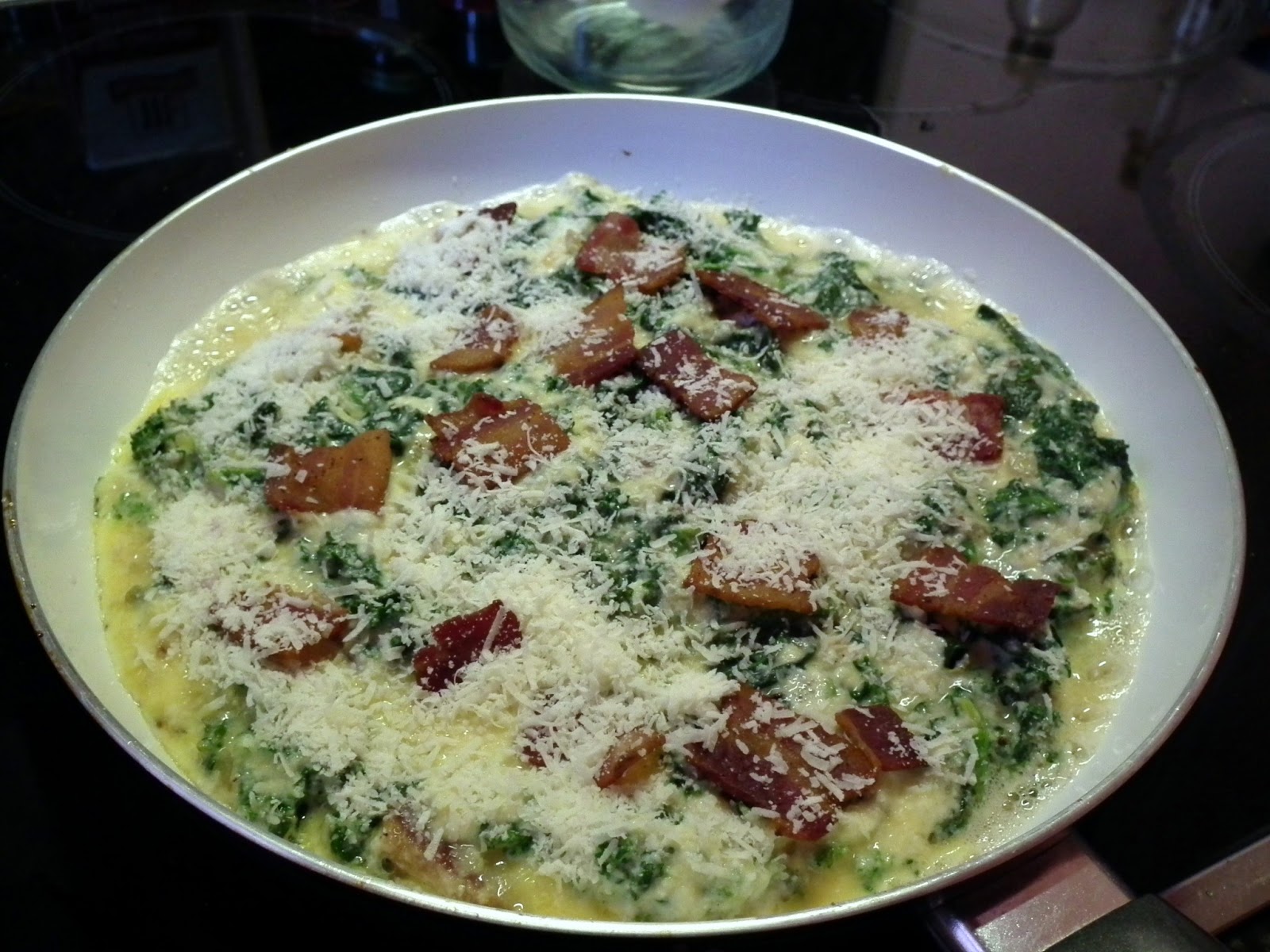 Once everything is mixed together, you'll pour it back into your pan.  Spread the mixture out evenly, and top it with the rest of your bacon and more parmesan cheese.  Once the edges have set, you're ready to throw 'er in the oven to finish baking for about 20 minutes.  When she's done, she'll look like this... 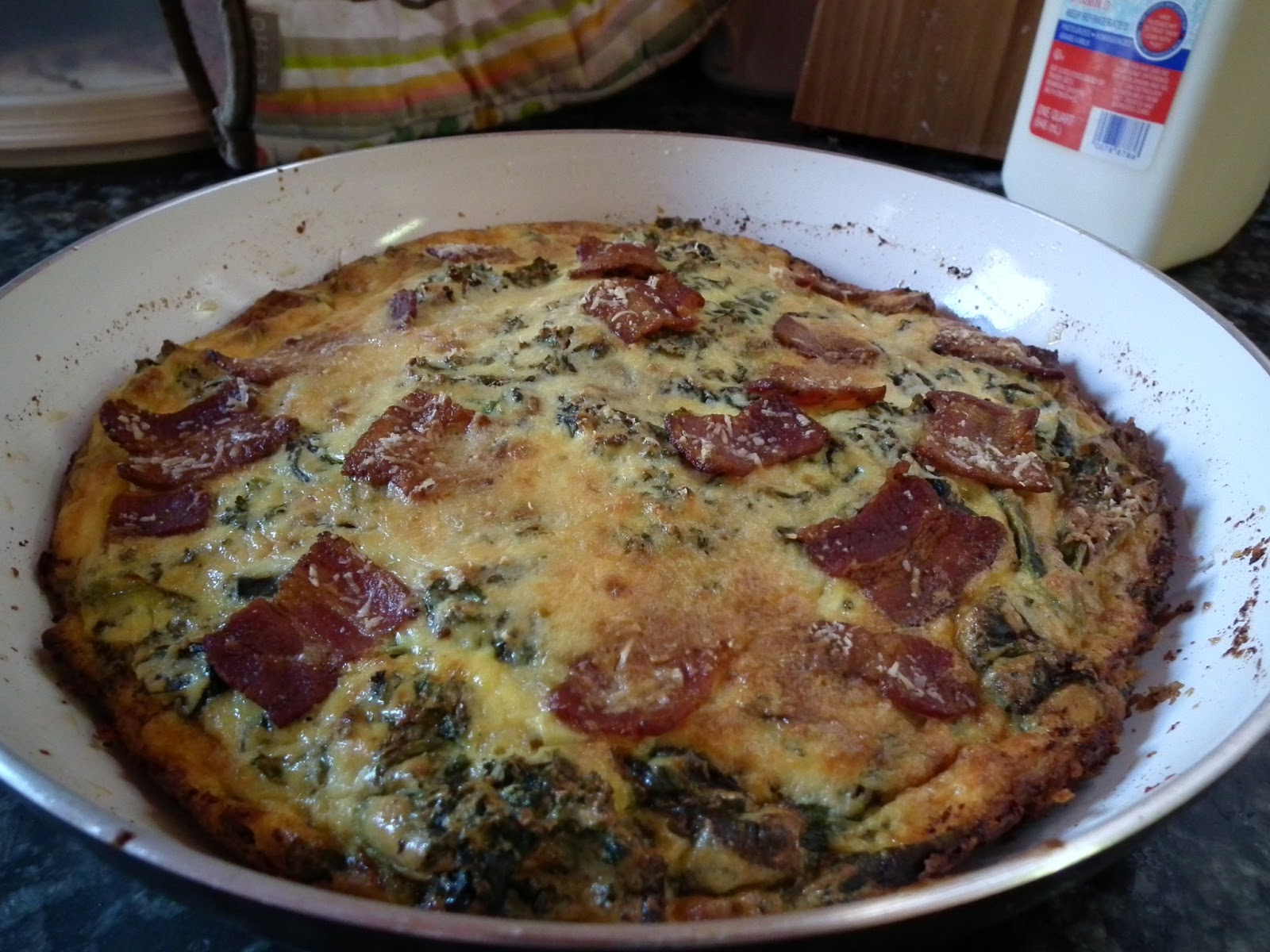 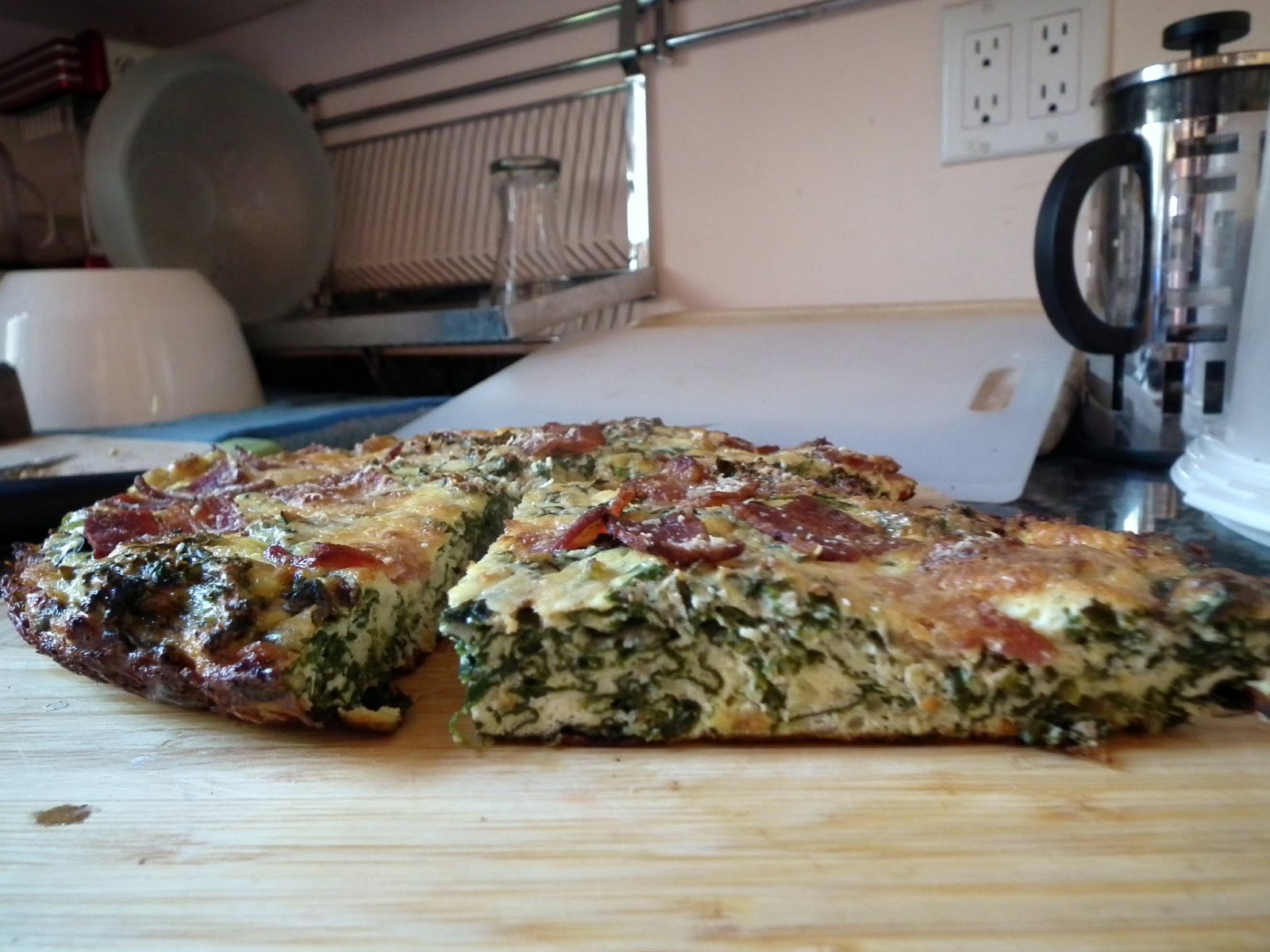 Now, for the pancakes!  I made these while the frittata was baking in the oven. 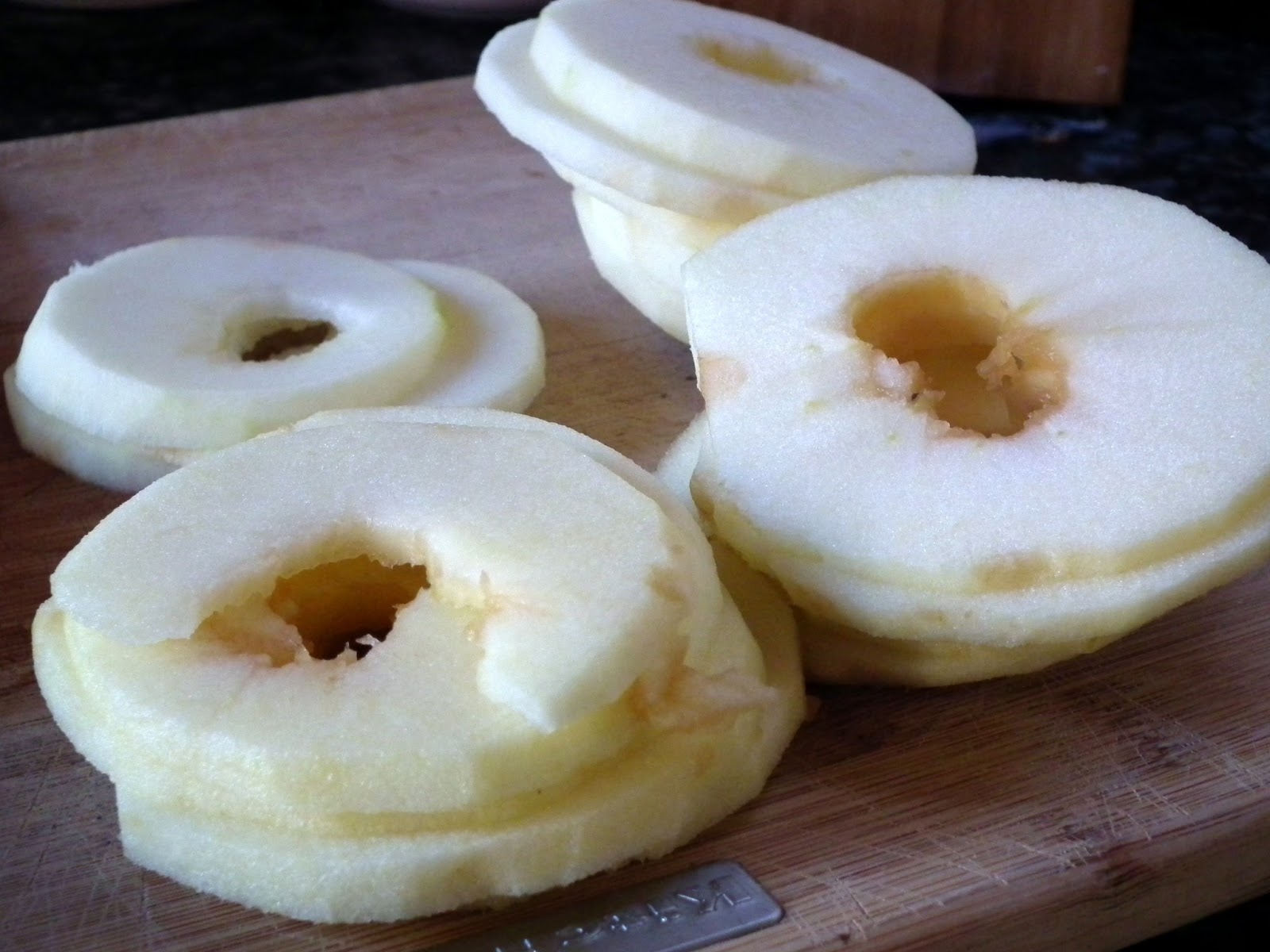 Start by peeling, coring and slicing your apples into rings.  We used the fuji apple and one of the granny smith apples.  The batter was simple...just some flour, eggs, milk, melted butter, baking powder and cinnamon.  Since we always like to put our own little twist on recipes, we also added in some pumpkin pie spice (since we didn't have any nutmeg on hand), and some chopped pecans.

Once your batter is mixed, just dunk your rings in the batter so they're completely coated, and place them in the pan to cook up.  One thing we learned after the first batch...if you decide to add nuts to the batter, its probably best to spoon them into the hole of your apple rings.  This will allow the apples to sit flat in the pan, and cook up more evenly. 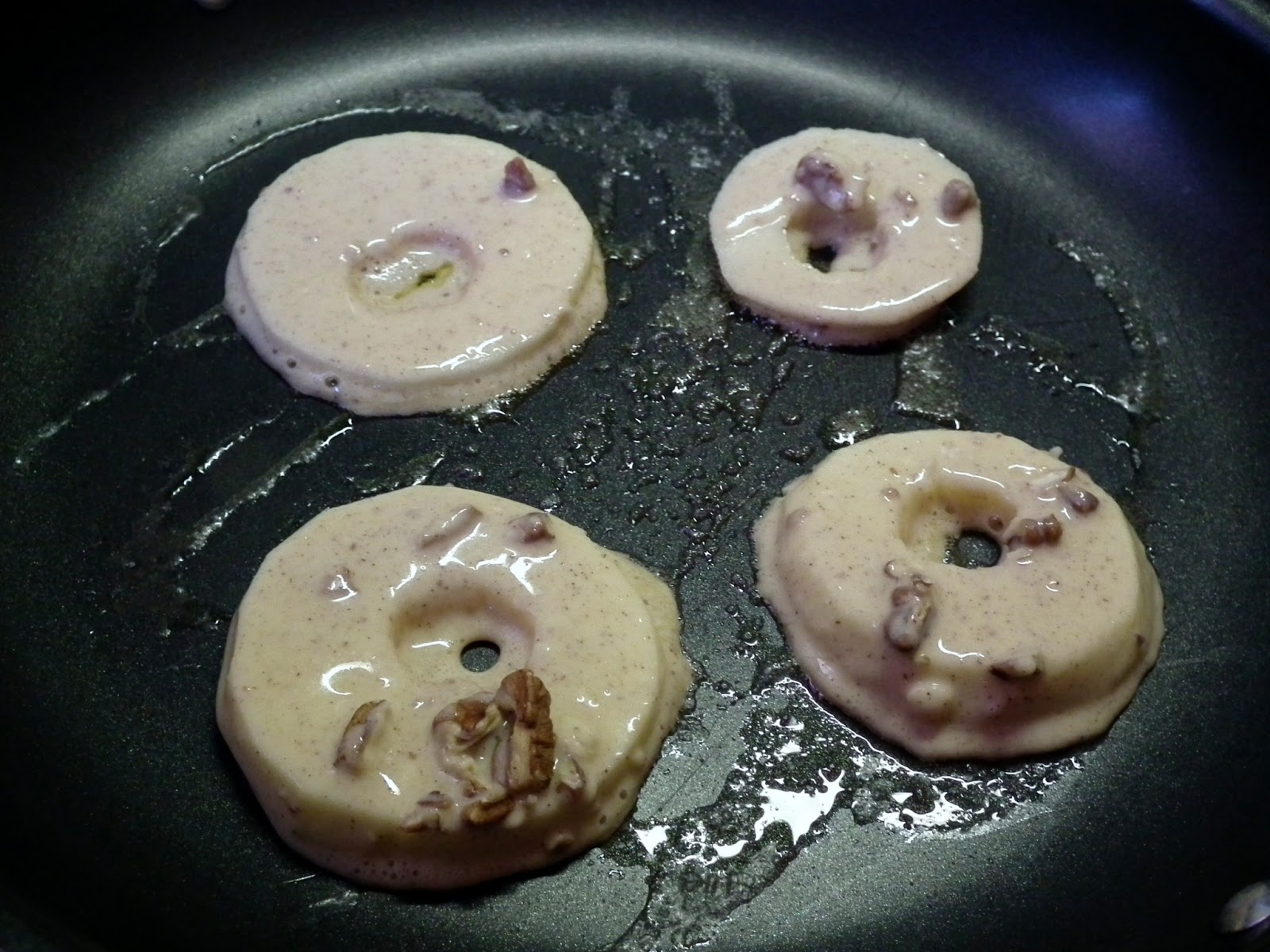 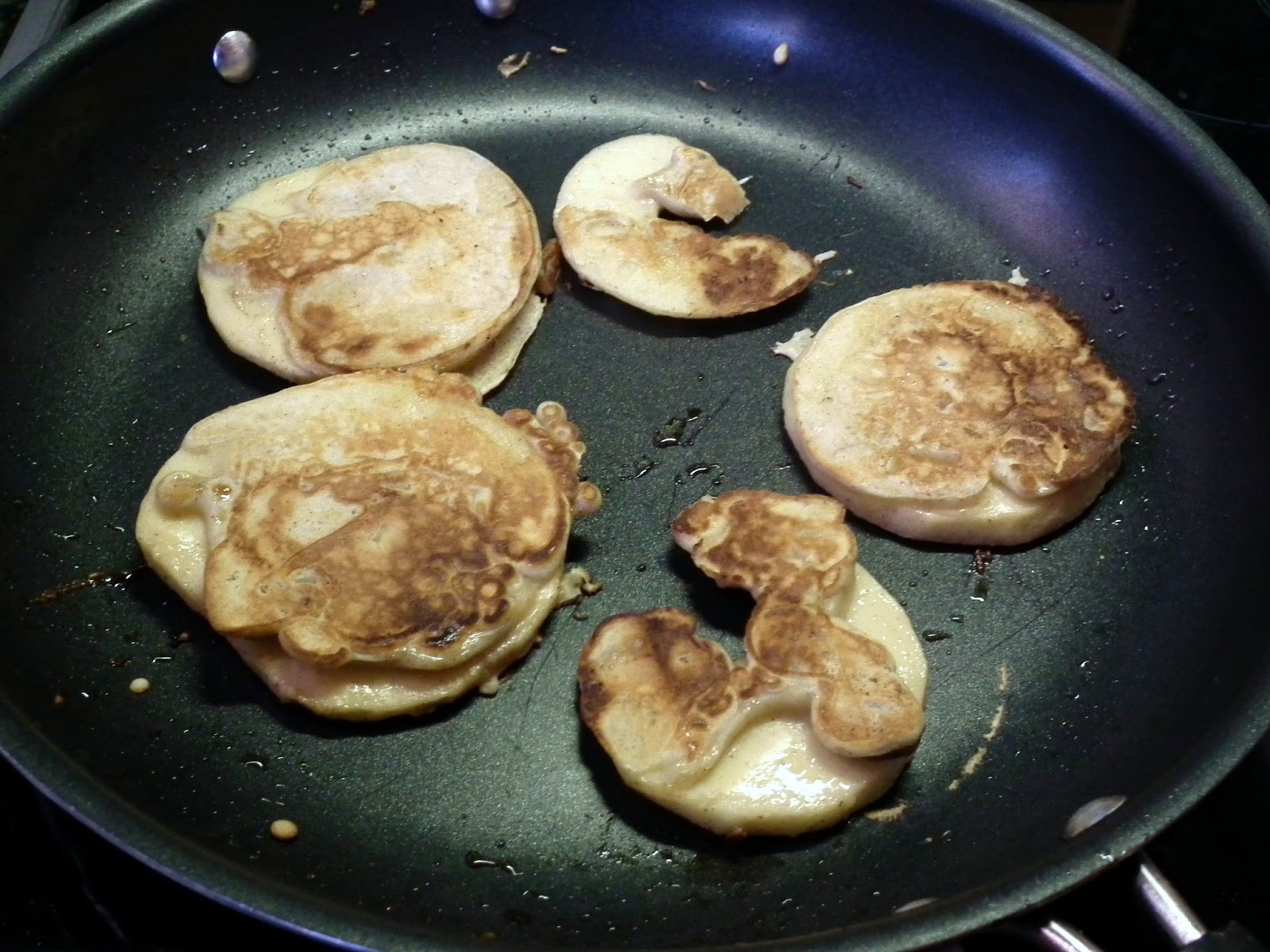 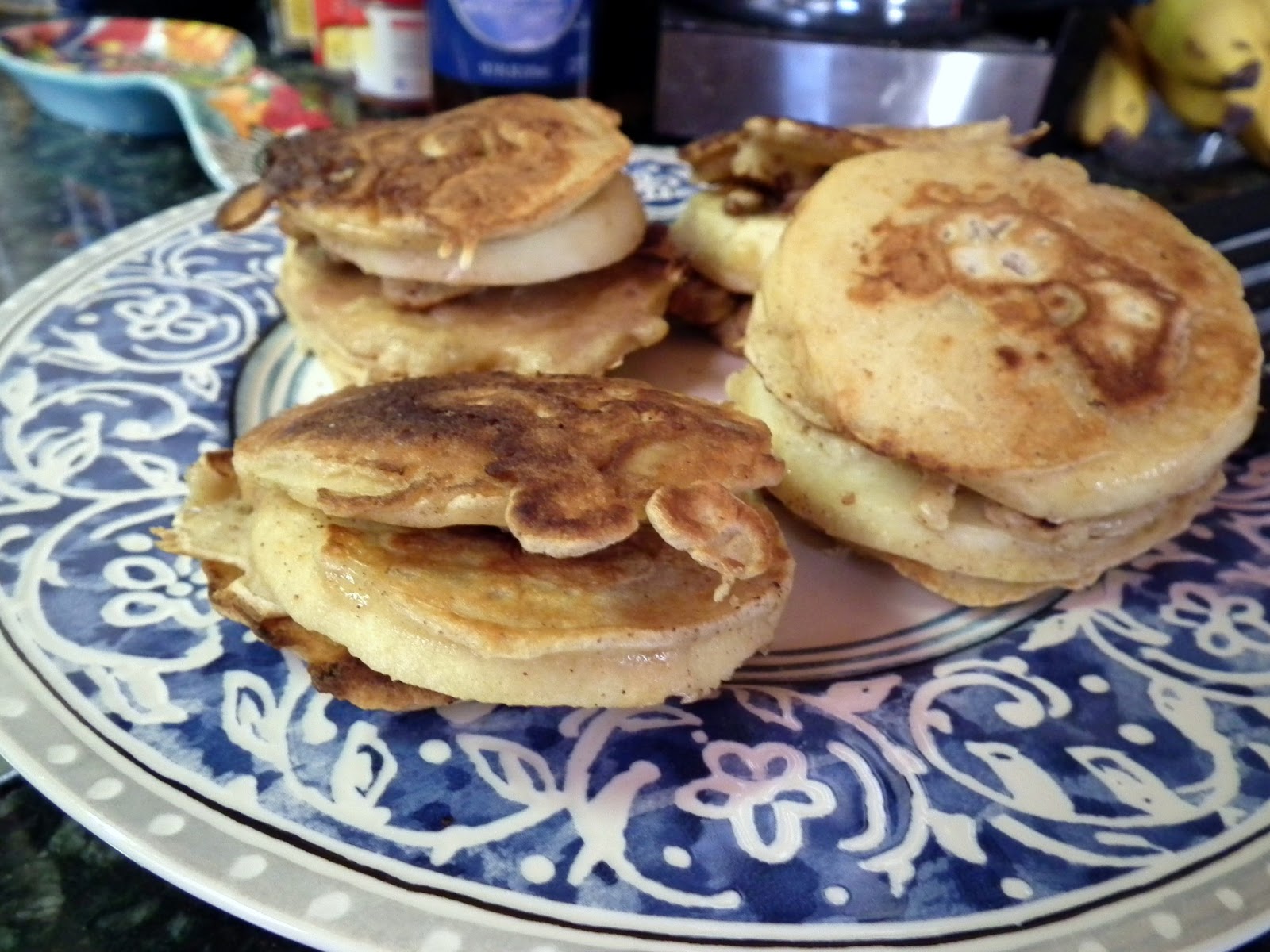 But that's the fun part about cooking...it's all about trial and error, learning as you go, and making adjustments along the way.  That first batch may not have looked the prettiest, but they still tasted pretty darn good!

In the end, we had a delicious brunch.  The frittata was a savory dish, balanced out by the creamy ricotta. While the pancakes were sweet and tart from the apples, which still had a nice crunch to them.  And brunch wouldn't be complete without a bloody mary!  The only thing we were missing was a slice of cantaloupe at the end to make it a complete brunch. 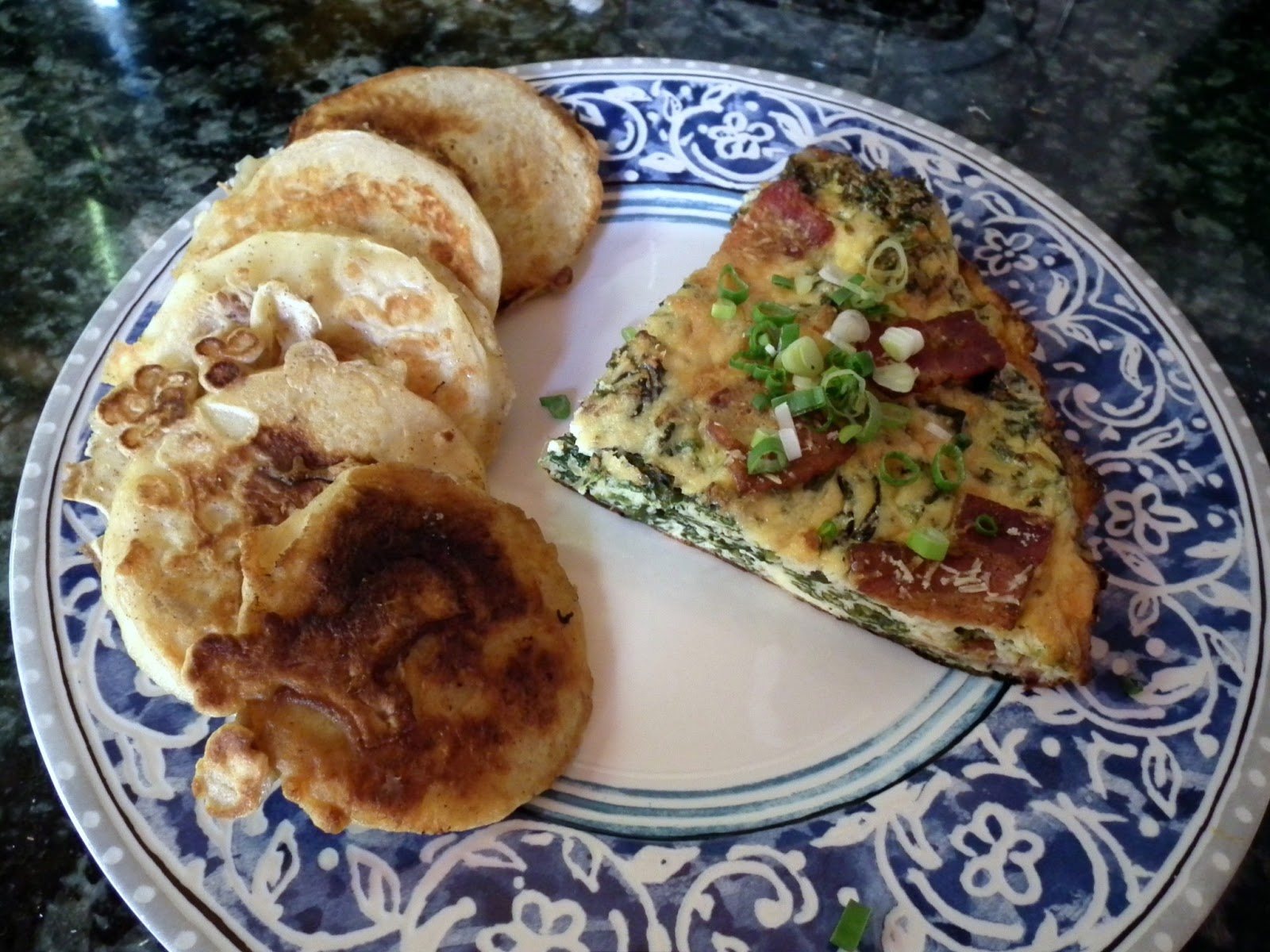 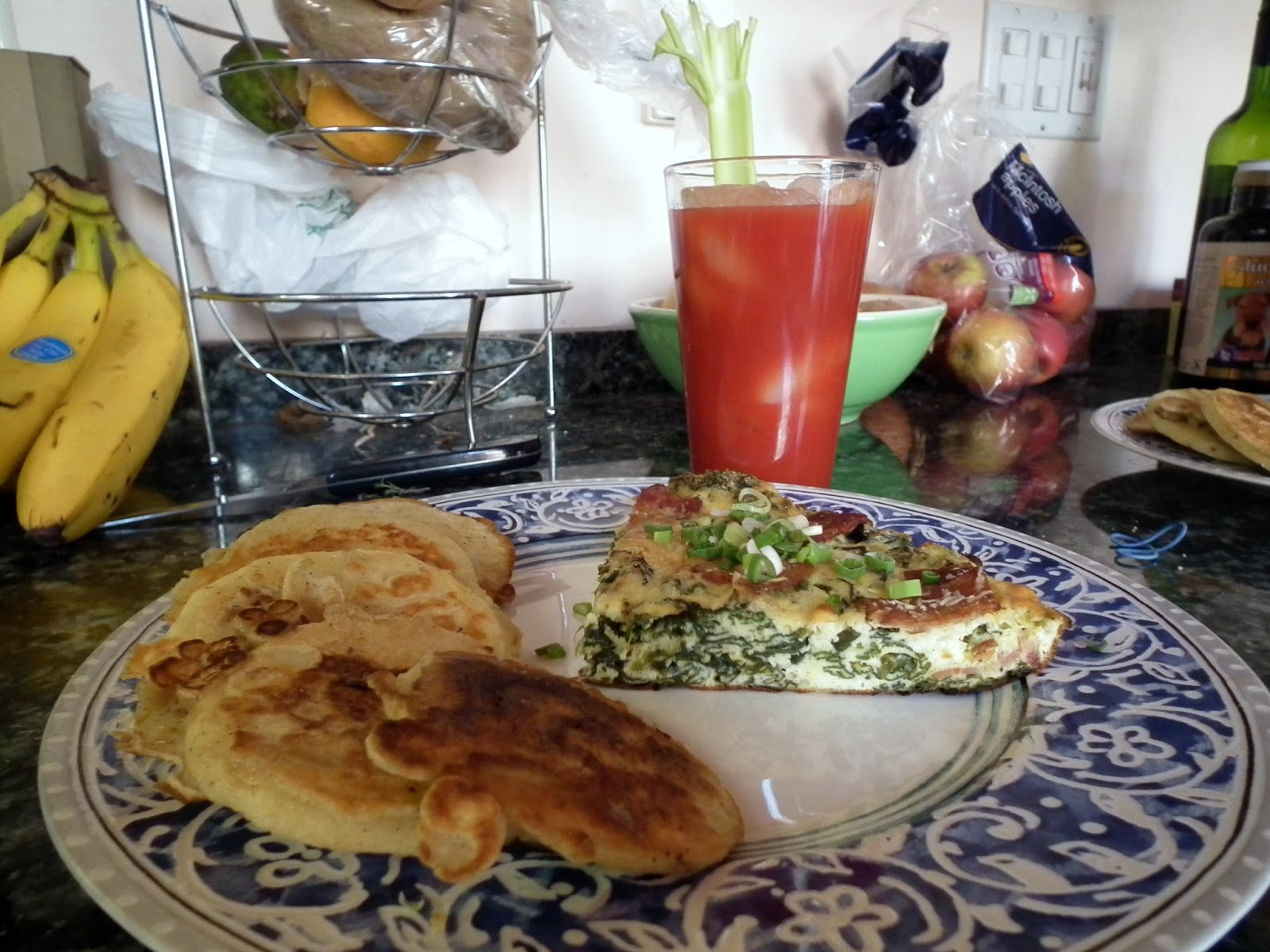