That's right...2 posts in 1 day!  So grab your passport and join us as we chow down on some Indian grub!  Now, don't be intimidated by the thought of cooking Indian food.  The techniques aren't anything new, but there are probably a few spices that aren't currently in your pantry.  For the lamb biryani and the chana masala we needed quite a variety of spices, but we actually had most of them on hand already. 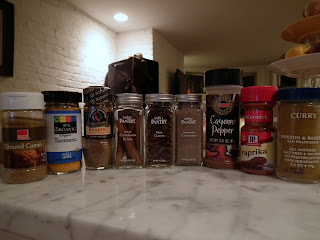 We found recipes online for both the lamb biryani and the chana masala, and kept pretty close to the recipes.  So let's start with the lamb.

Start with some plain yogurt, garlic, cayenne, cumin, salt & pepper.  Once mixed together, drop in your lamb and make sure they're nice and coated in the yogurt mixture.  While the lamb is getting all cozy with the yogurt and spices, you can saute some sliced onions in butter with cardamom, turmeric, cloves, and cinnamon. 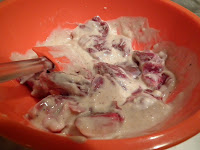 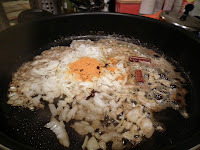 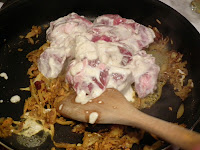 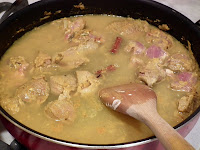 This was an oversight on our part, so we had to use a bit of cornstarch to thicken the sauce, and added more spices to bring back the flavor.  It was an easy save.  When you're ready to serve, toss in your toasted cashews.  You don't want to add them too early, otherwise they'll lose a bit of their crunch.

Now, onto the chana masala.  This was another easy dish to pull together.  You start with some onion, garlic, ginger, and a hot green chili.  All I could at the store was a jalepeno, but it worked out just fine.  Once those cook down, add in your spices: coriander, cumin, cayenne, turmeric, paprika, garam masala (I had to use some curry since the grocery store was out of garam masala), and the juice from half of a lemon. 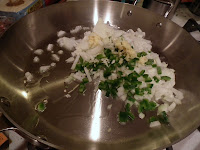 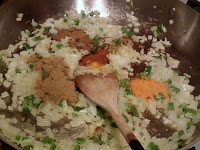 Once everything has been cooking for a few minutes, add your tomatoes and their juices.  This is when you can deglaze the pan and scrape up all the tasty bits at the bottom.  Once you've scraped up all the bits, you can add the chickpeas, water, and the juice from the rest of the lemon, and just let it simmer so all the flavors can come together, and the tomatoes can cook down. 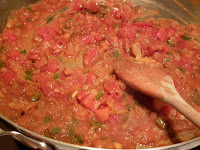 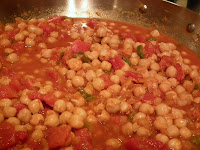 We also had a third dish, some dal makhani, which is a dish of lentils and kidney beans.  We kind of cheated on this one, just heating it through and adding it to the plate.  But overall, it was a quick, and easy meal to put together.  We may have had to buy some additional spices, but that just adds to our arsenal.  Don't be intimidated by cooking ethnic food at home.  When you break it down, it's really just using different spices an flavor combinations, using techniques you're already familiar with. 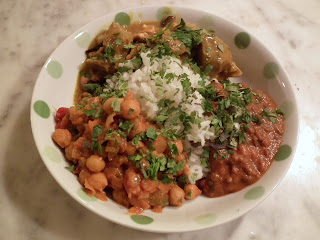 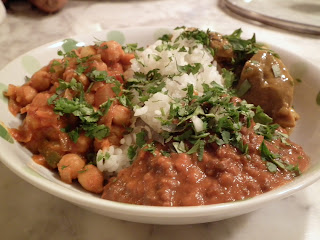