No St. Patrick's Day can go by without having corned beef and cabbage.  But like we do with most recipes, we put our own twist on the classic meal.  With Justin's roots in Pittsburgh, and my brief year there, we both love Primanti Bros.'s sandwiches, so we used that to put our own spin on a NY Deli classic.  And to round out the meal, we did some baking; but not just any baking--we used some Paddy approved ingredients such as stout and bacon and made a chocolate bacon beer cake.

So let's start with the sandwich.  There wasn't much to it tonight.  We picked up a nice, crusty white loaf of rustic Italian bread, and cut some thick slices to toast up, and slathered on some whole grain mustard.  We warmed up some thickly sliced corned beef from the deli, and some leftover slices of mortadella.  Instead of the traditional coleslaw, we used our homemade sauerkraut for the cabbage component.  And for the potato component, we made some homemade fries, tossed in some rendered bacon fat.  Pile everything on the bread...meat, 'kraut, fries...smash! 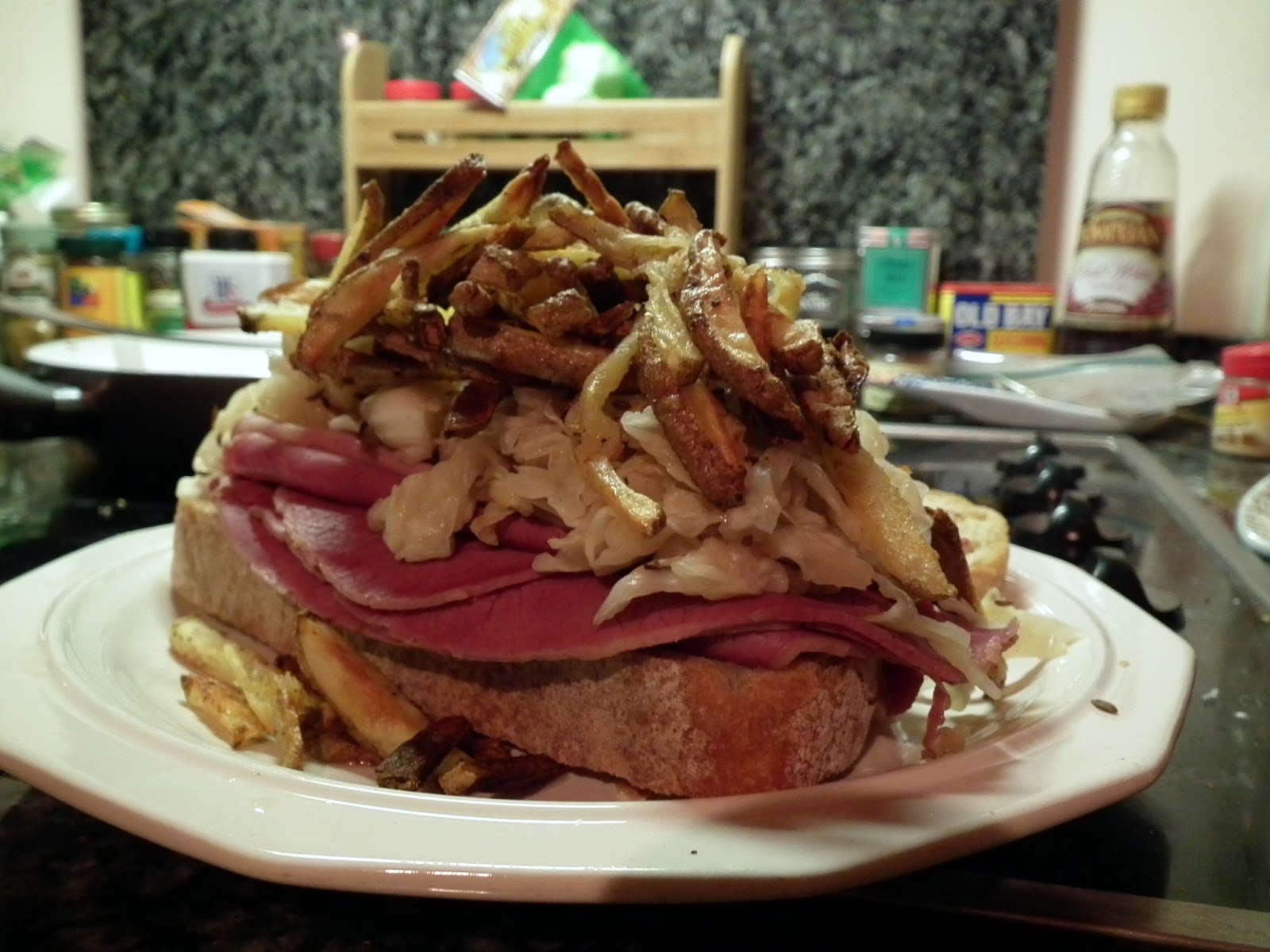 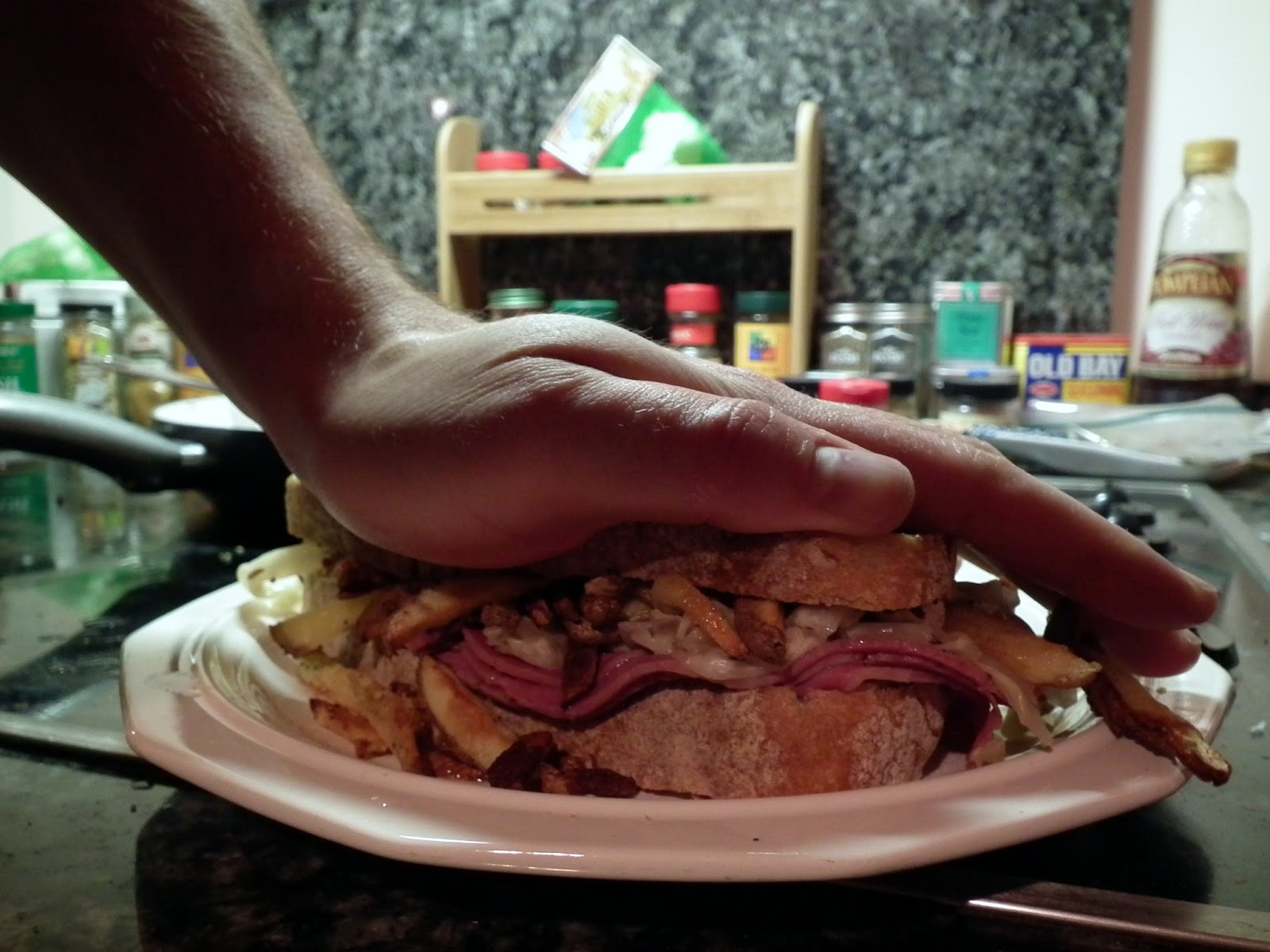 It rivaled the real thing!

Now for the cake.  I'm usually not much of a baker, but since it involved bacon and beer, I figured I'd give it a shot.  We started by rendering down the bacon.  Once it was crispy, we poured off most of the fat, and then added in some Jameson, Boatswain chocolate stout (only $1.99 from Trader Joe's!), some maple syrup, and a bit of brown sugar to deglaze the pan and candy the bacon.  Once the liquid cooked down and resembled caramel, we poured it onto a silicone mat to cool. 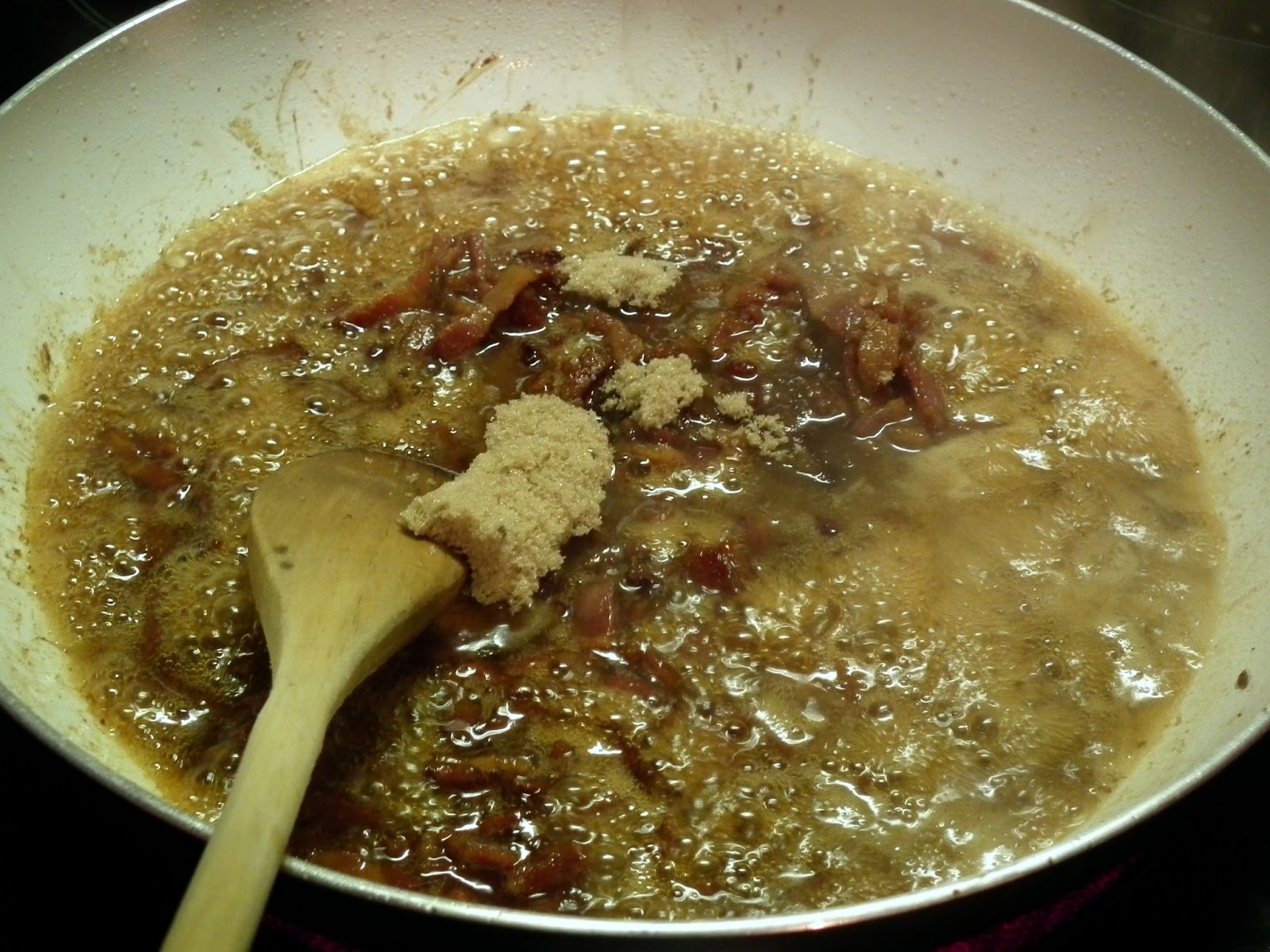 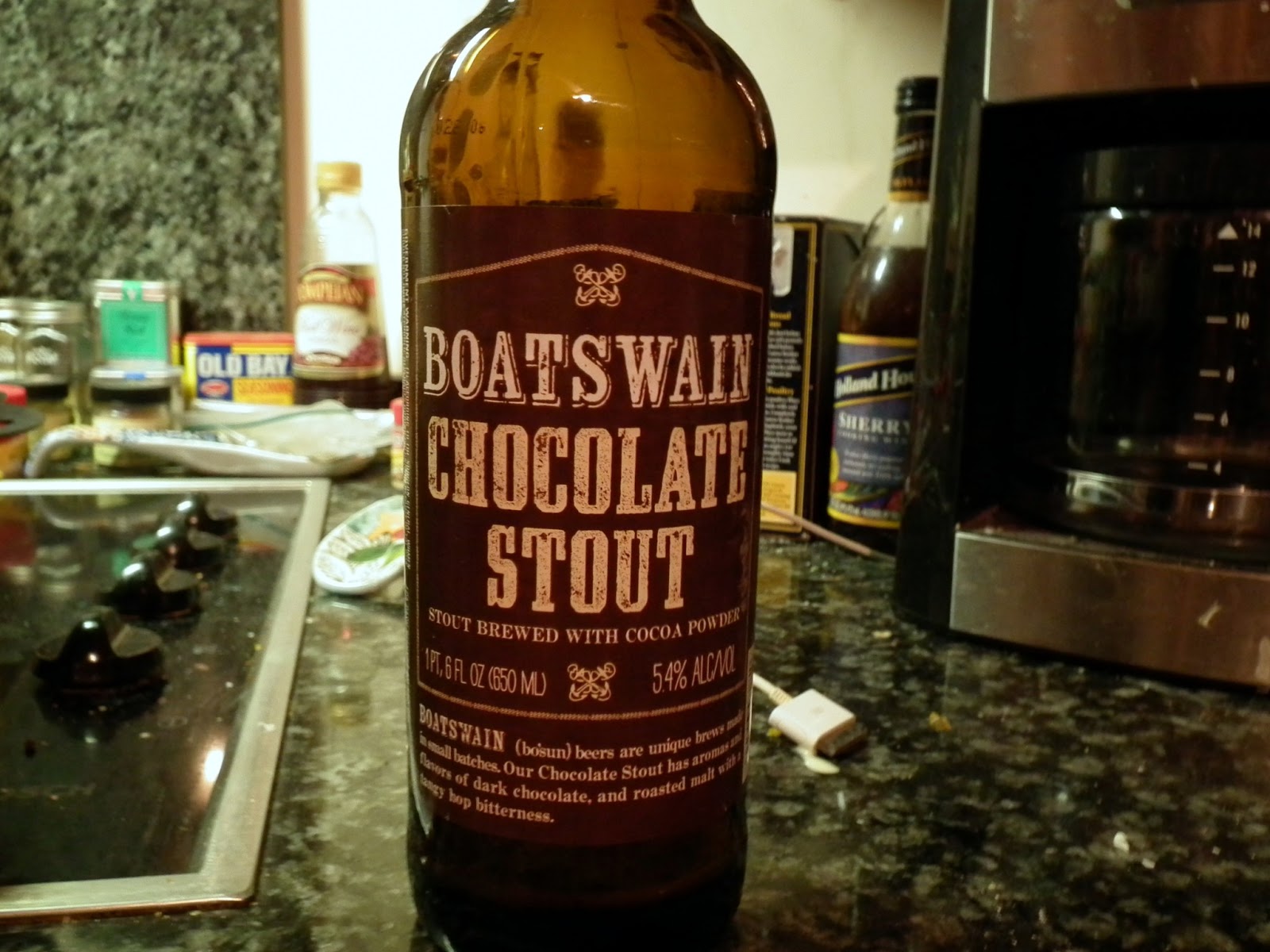 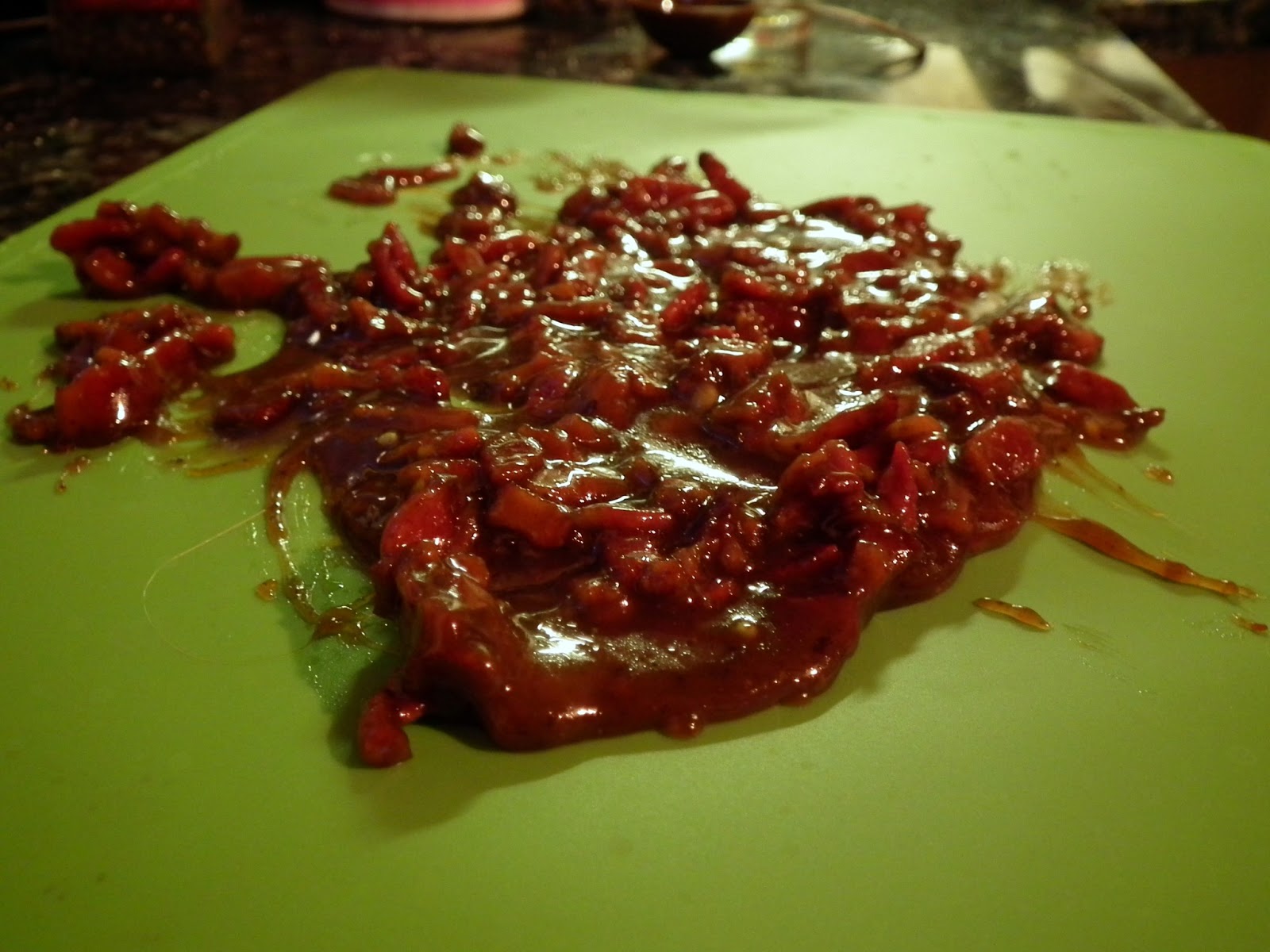 Without cleaning the pan, we melted the butter and added a cup of the stout to start on our cake batter.  Once the butter was melted, we whisked in the cocoa powder.  In a separate bowl we beat together the sour cream and eggs, and then added those to the chocolate stout mixture. 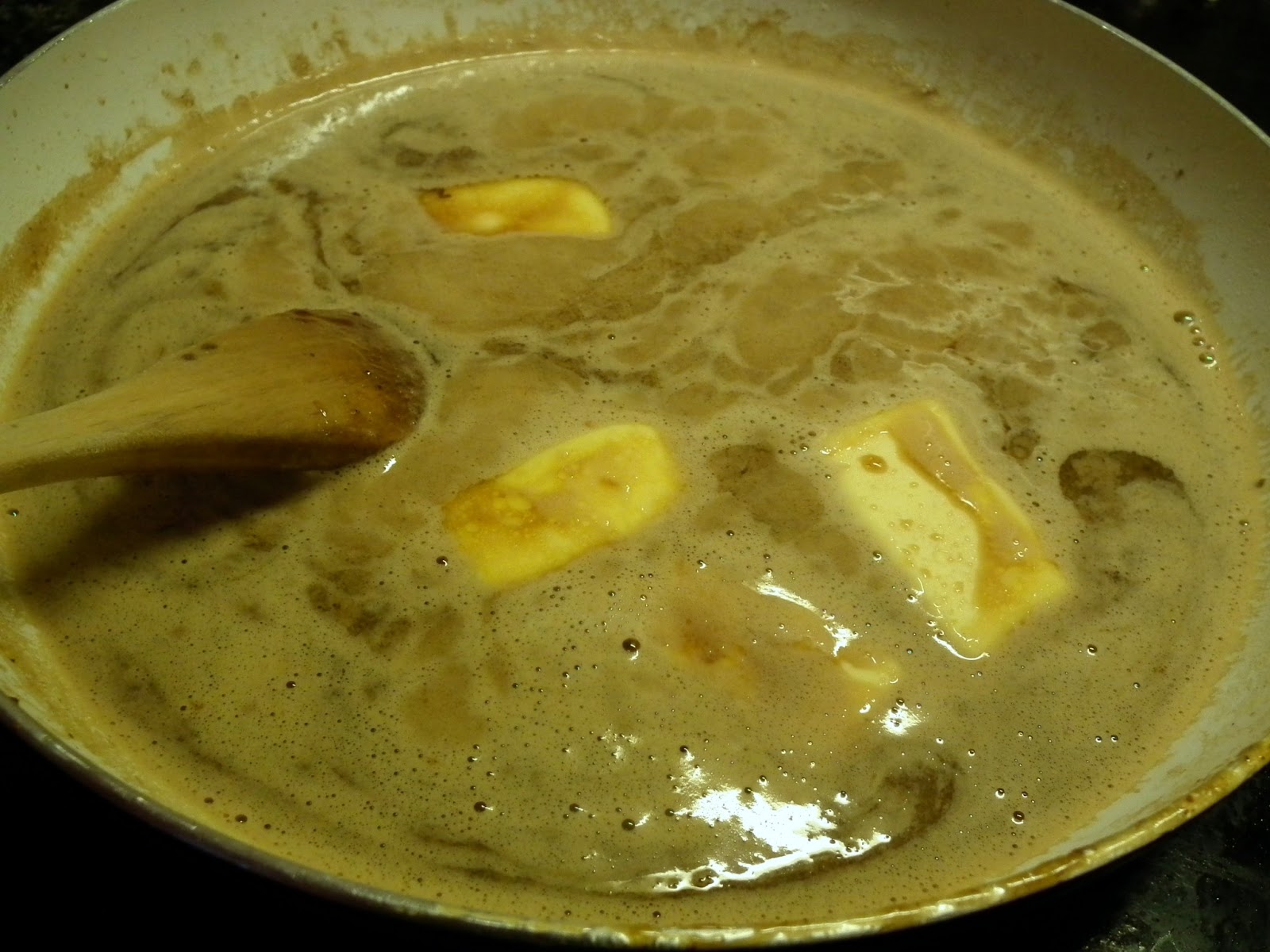 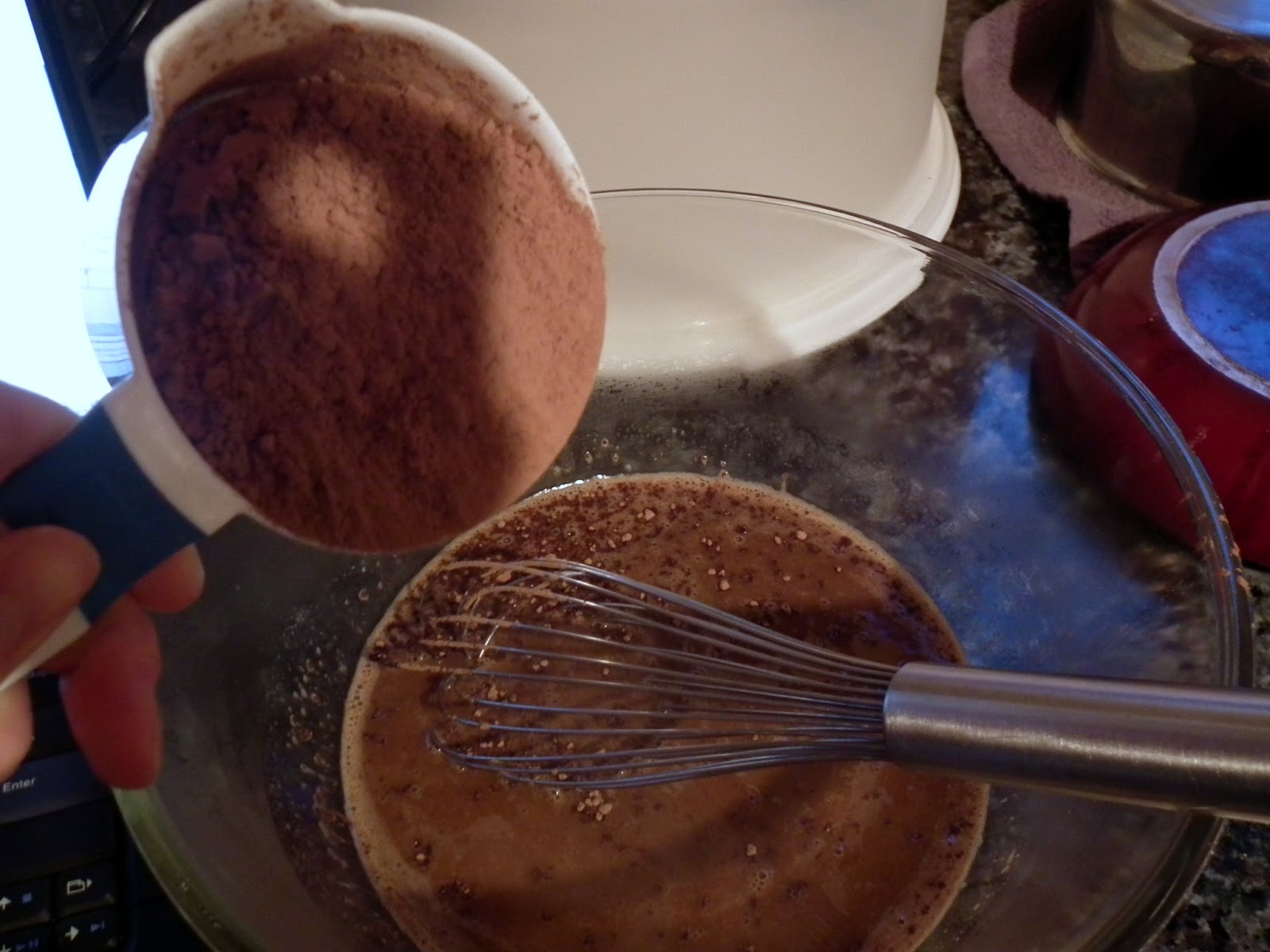 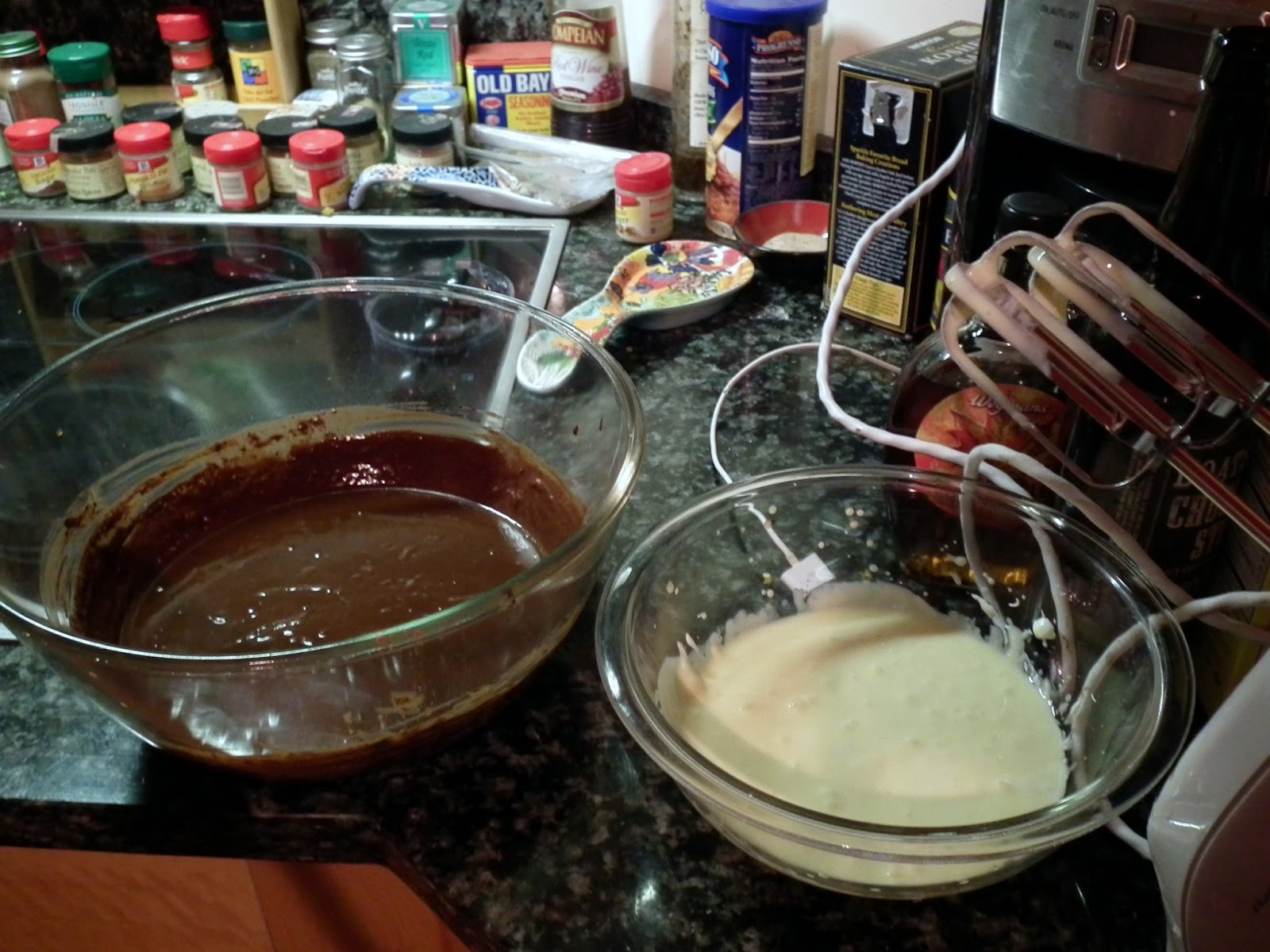 Then we slowly mixed in the dry ingredients until everything was completely mixed together.  We poured half of the batter into a greased bundt pan, and then added in some of the candied bacon. 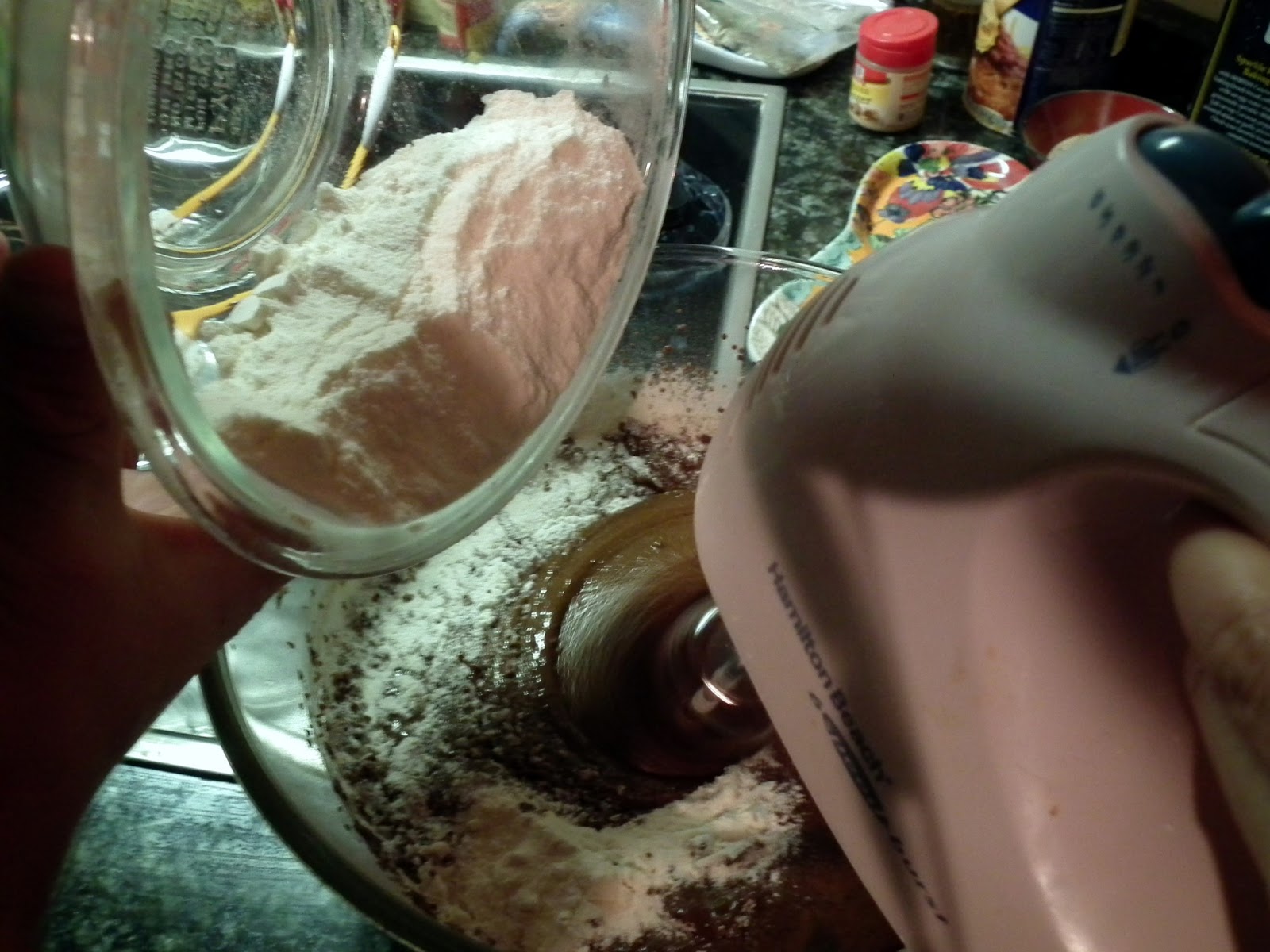 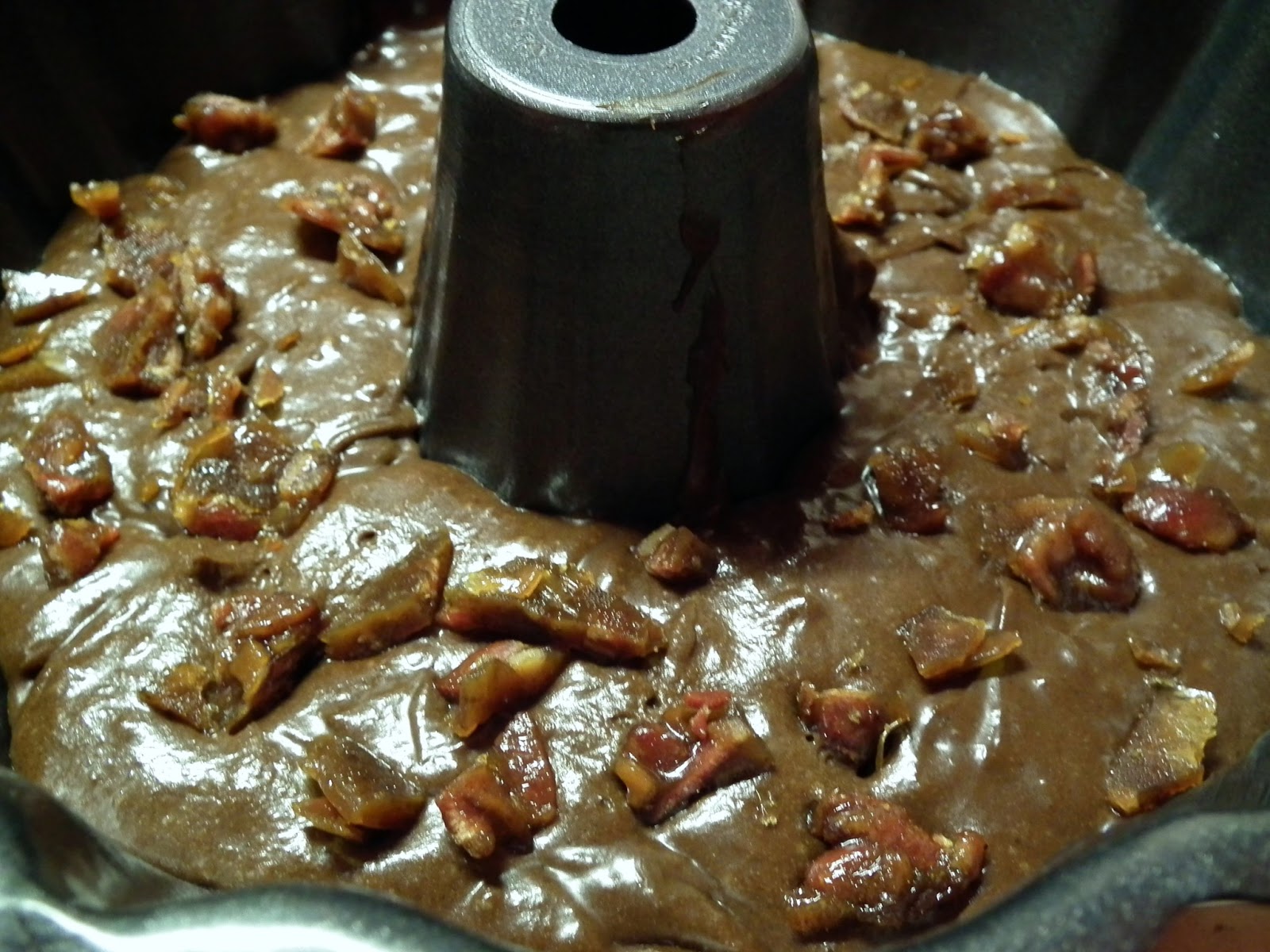 The rest of the batter was poured into the pan.  Before throwing it in the oven, I gave the pan a couple quick twists to make sure the batter was distributed evenly.  It went into the oven for about 45 minutes. 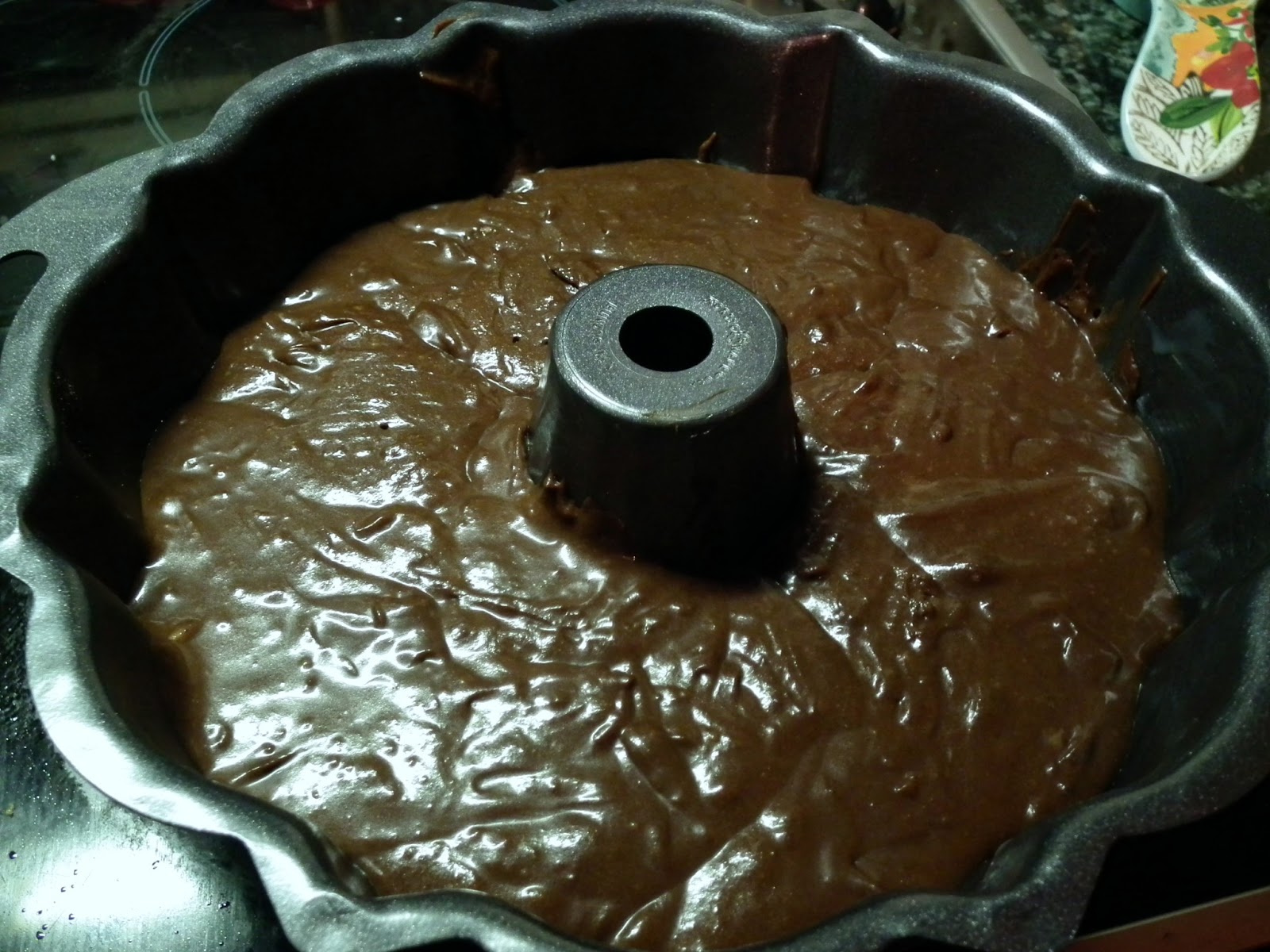 Once we turned the cake out onto a cooling rack, we let it cool while we made the maple glaze.  One of my Chirstmas presents that I forgot to mention here, was a subscription to Saveur, and the first issue I received was all about donuts, including about a dozen different glazes, including a maple glaze.  As always, we added our own twist though. 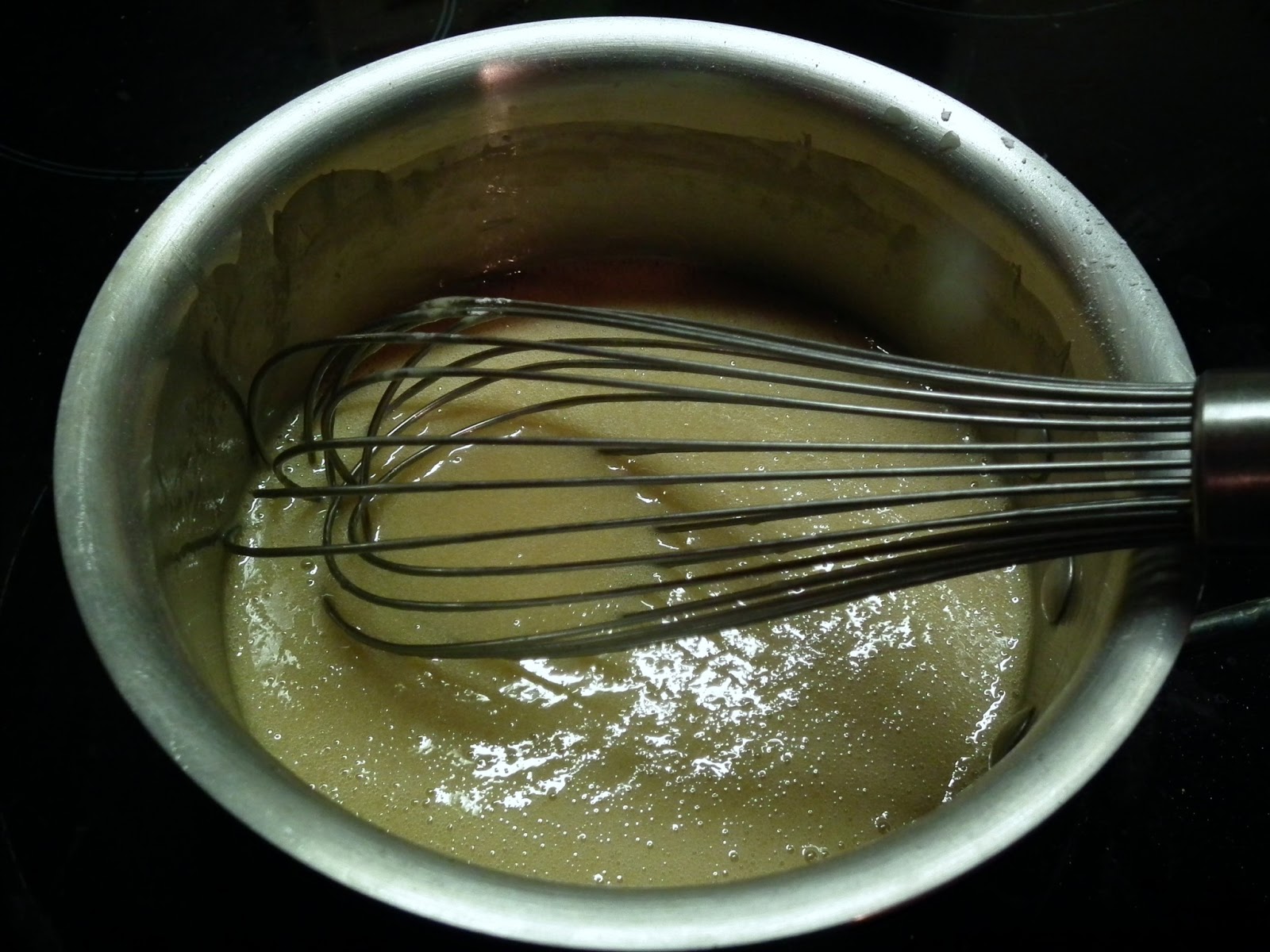 So into a pot went some heavy cream, powdered sugar, maple syrup and a dash of salt.  That was the original recipe.  But it wouldn't be St. Patrick's Day without some Bailey's Irish Cream.  So we put a bit of that into the glaze.  And since we used all of the chocolate stout for the cake, we added in a dash of Mothership Connection, a beer by Chocolate City Beer, here in DC.  It's a tasty Weizenbock that added a fruity sweetness to the glaze.

Once the cake cooled, we drizzled the glaze over the top, and added the rest of the candied bacon. 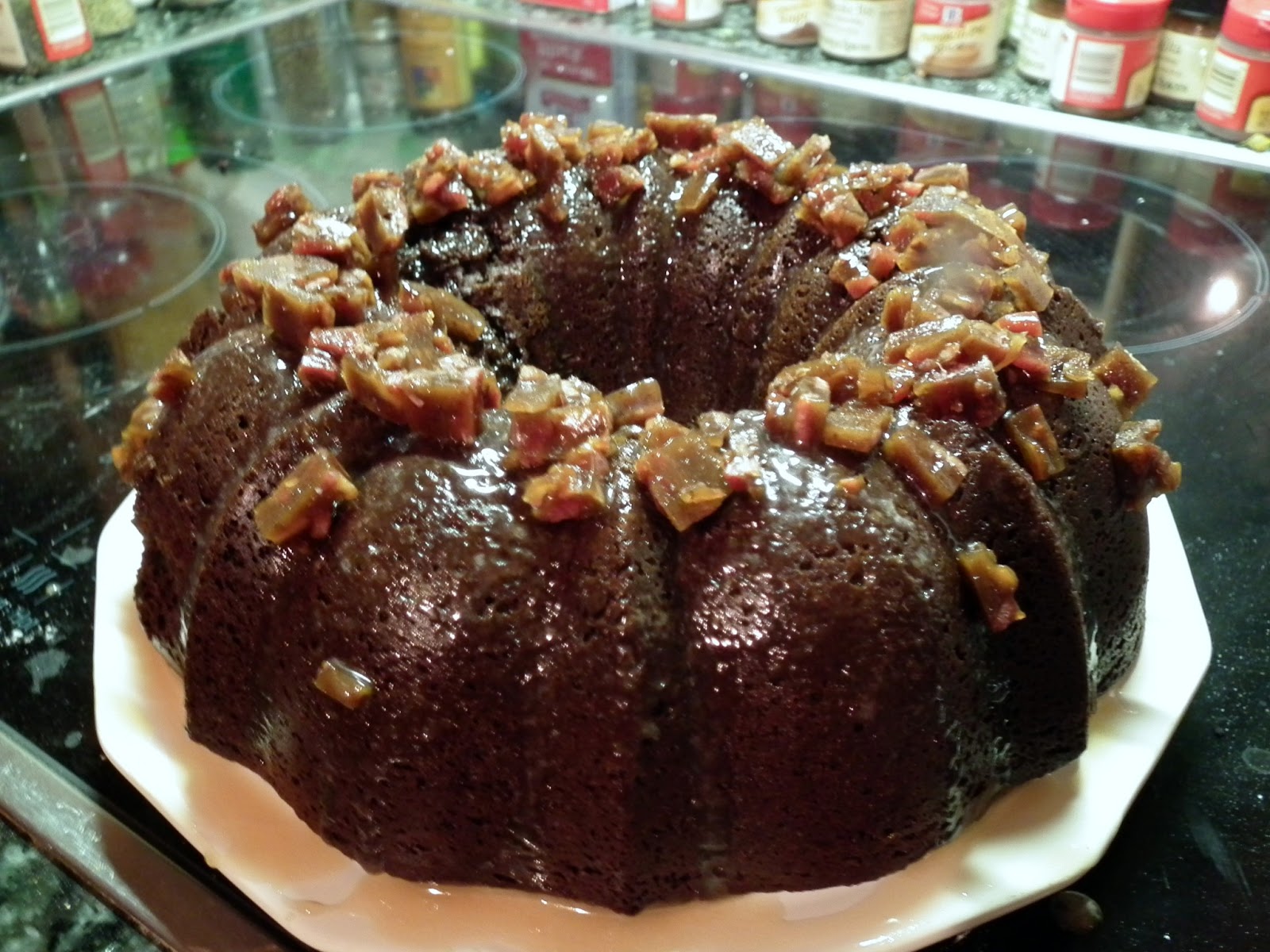 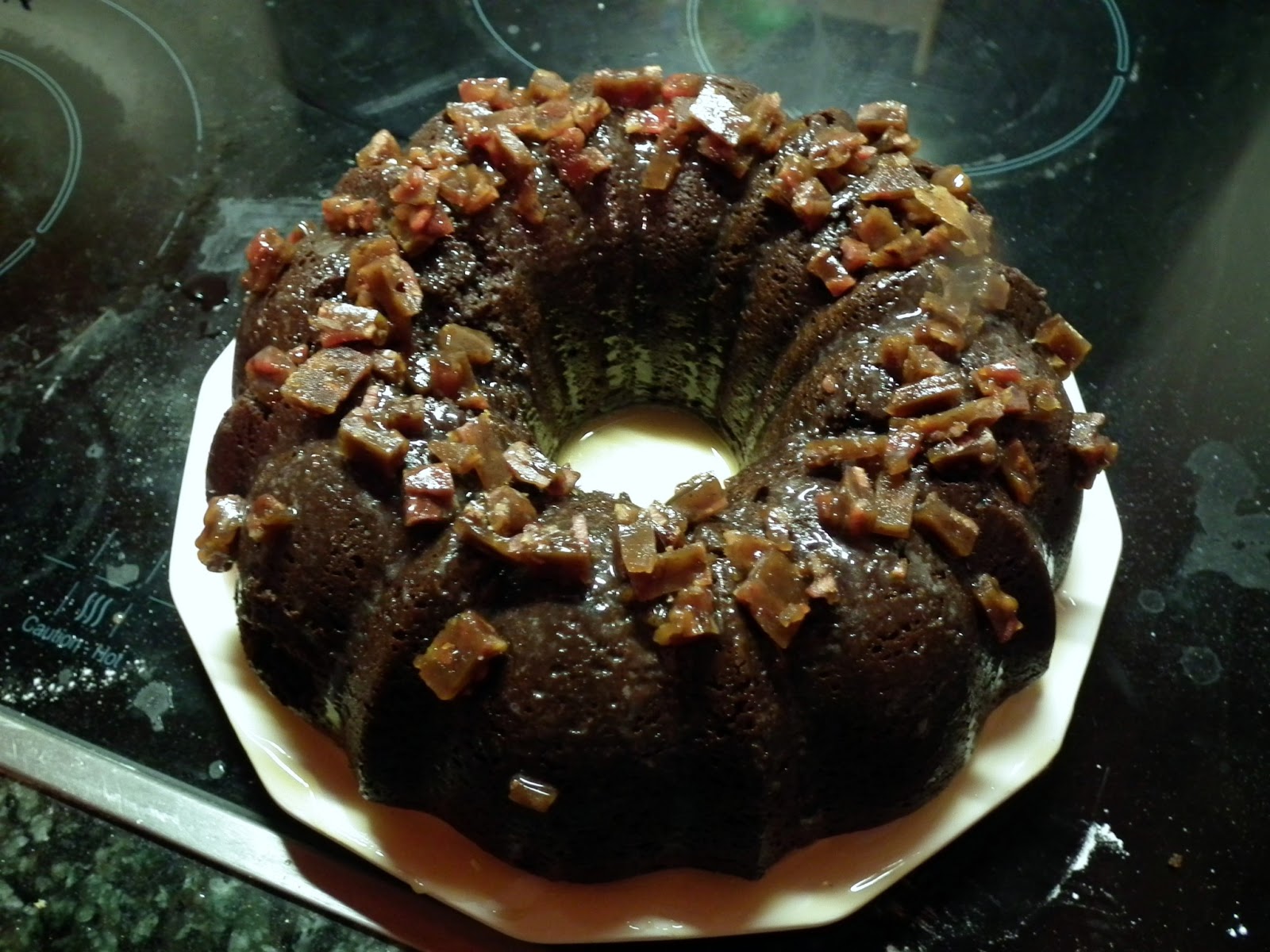 How good does that look?  The cake was light and fluffy, and tasted like a brownie, while the bacon added a little saltiness and cut the sweetness from the glaze.  We definitely took advantage of it being our cheat day, and hopefully Justin's housemates will eat the rest of the cake so we don't have to.  With corned beef, potatoes, and lots of beer it was a meal that could drive the snakes from Ireland, and drive some hungry people to the table!
Posted by Unknown at 11:01 PM